The Fall of France, XI: A Machine For Controlling Space, IV: At The Wall Around The World

I should be talking about the energy content of nitrocellulose dissolved in toluene and the ballistic properties of supersonic projectiles in atmosphere. There's nothing like the  tumultuous years between the Relief of Chitral and the Tirah Expedition (shorter, longer, longest) for a lesson in the way that technology changes our relations with the landscape.

Instead, I will start with the mountains of the imagination. It was ....1978, I think.  My grandparents had already begun to drop me off with my birthday money at what seemed like the world's biggest bookstore, just across from the old train station in Vernon. B. C. tucked between the fault-filling Lake Okanagan and the abutting massif of Silver Star --a satellite of the Monashee.* I bought science fiction paperbacks. I'd already consumed my share, but not nearly enough to be up to date with the whole field, so this was new to me. It entranced me, and perhaps still would if I didn't know far more about Marion Zimmer Bradley's personal life than I ever would have wished.

But let's forget about that and get back to the childish sense of wonder, to the mysterious world of adventure and psi powers under the red sun of Darkover, where the mysteries of ancient days linger in the mountains of the Wall Around the World. The what? 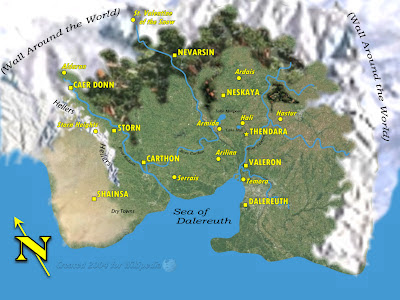 The original's at Wikipedia, of course.  This is what happens when they come for your childhood. The question I always had was, "what's beyond the Wall Around the World?" It turns out that the answer is nothing, which was inevitable as worldbuilding, but disappointing for this (alleged) grown-up.

Other romantic places have probably changed, too. There's a highway through Chitral, where the Pamirs meet the Himalayas. Google Image refused to deliver a shot of downtown Chitral "[spoiled] by modern dentistry, so here's the decidedly romantic Fort of Chitral:

I've hotlinked the photo from Pakistanpaedia, because I think the intent is to drive tourist traffic, and I heartily approve.

Here is the site author's explanation:


Ask anyone where Chitral is, and one may get a blank look since this land of Tirich Mir and the Kafirs, people of the lost world, is obscured behind the Lowari Top, which due to its inaccessibility generally keeps the tourist and holiday makers at bay. But those who dare to venture and reach out to Chitral Valley, find themselves in a different world - overlooked by the mighty Tirich Mir, standing at a height of 7,692 metres as part of the Hindu Kush mountain range, and located in the far reaches of Pakistan. Chitral is also famous for the Shandur Festival, which is held each year and where polo is played at the highest polo ground of the world at a height of 3,719 metres. The beauty of Chitral lies as much in its rustic, mountainous terrain, as in its warm hearted and friendly inhabitants. Since it is a land high up in the mountains, at such places legends fascinate the on lookers. One such legend describes Chitral as an abode of genies and fairies in times when no one lived here and locals still look up to the Tirich Mir, which they believe still has the castle of fairies.

I know I see a faerie seat.

I think that you're still allowed to call the cross-border kin of the Nuristanis "Kaffirs," because they retain the old "Kaffir" paganism. Not that I'm inclined to celebrate that. (The actual pagans I know are a little ...twee.), But they worship Amra. Amra, dude!

Uhm, er, yes: point. Yes, I do, again, have a point. Which is this: Chitral sits on a tributary of the Kabul River, the Kunar, giving easy access to that city. However, it lies on the British Indian side of the Durand Line, and so is blocked off from this connection, which anyway the Chitralis and Kabulis used to make unworkable by regular feuding. This leaves the valley connected to the Hindu Raj via Peshawar by the high,seasonal Lowari Pass, and by Gilgit in North Kashmir via the similarly snowbound Shandur. Gilgit itself, however, is more directly connected to Ladakh and from thence by the high road to Lhasa that runs through the Panchen Lama's old seat at Shigatse, although the road has been closed since the occupation of Tibet.

Finally, Chitral is connected, ultimately, to the Vale of Fergana via the Broghol Pass. Fergana was part of the Russian Empire in the 1890s, and actually quite a nice bit.

So, obviously, this was the route that the Russians would use in their imminent invasion of British India. Which was why there was a British Indian garrison in town when the regime transition began on 15 March 1892. Fifteen sepoys were killed, and the senior British officer organised a retreat into Chitral Fort. After preparing for a siege, he  sent word out in hope of relief. The eventual success of two relief columns (via Swat and Gilgit) may have had perverse results later, but it was all a fine demonstration of mountaineering and mountain fighting in a picturesque part of the world, including, in a feat of arms worthy of mention in despatches, the storming of Malakhand Pass by a force of Frontier Guides.

Over the next few years, the "Iron Emir," Abdur Rahman Khan would be even more ambitious, finally conquering the highlands of Kaffirstan/Nuristan that had resisted Tamerlaine in 1895.

Then, in 1897, the Afridi tribal militia who guarded the Khyber Pass for British India revolted for the usual incomprehensible tribal reasons. Something about taboos and ritual impurity, I'm sure. The Dargai Heights control the entrance to the vale of Tirah. Three battalions, the Gordons, 3rd Gurkha Rifles, and Dorsetshires were thrown at the heights and took them, at the cost of 199 casualties. (Pipe air: "Heights of Dargai.") That's a lot for one engagement in a punitive campaign far away in the hills of the Northwestern Frontier.

And it got worse. I've linked to the full version of General Lockhart's campaign history above, but to abstract a little, the problem was that many Afridi had Martini-Henry breechloading .50 calibre black-powder muskets, while perhaps 60 had Lee-Metfords, firing the .303 British with the higher calorie per gram compressed black powder propellant. This, as General Lockhart observed, put a heavy burden on the army's flankers. Whereas previously it had been possible to clear the flanks of the army (and, in the mountains, this all too often means the dominating heights) out to 800 yards, the effective limit of the jezail, now the flanks had to be extended as far as 1500 yards. There was great and difficulty and delay in taking mountain sangars when men had to go to ground at this distance, and the rearguard, under fire from distant vantage points, were repeatedly forced to abandon their fallen, in hope that they were dead rather than merely wounded.

It was an ugly little war in a place that had seen many wars. As a result of that long history of campaigning, there were many places of arms, either forts or traditional camp sites, into which Lockhart's command was channeled by the lay of the roads, if not the land. And these traditional sites were now overlooked by enemy fire, because of the improved range of the new rifles.

This is an old problem for fortress engineers, and an important reason why storied forts with a history of withstanding great sieges have been surrendered ignominiously by "cowardly" engineers a few years later. But it is a new problem for an entire landscape. The valleys of the Frontier are too narrow. Therefore, they cannot be controlled from the existing roads and forts. At least, not without committing entire corps to the task, as was eventually done in the annual Chitral garrison relief exercise.

Again, in 1895, Abdur Rahman at the head of a purely Afghan army, conquered the heights of the "Land of Light" and brought Islam to the unbeliever, with fire, sword, and the taxation state. In 1898, an entire corps of the best soldiers of the Raj were only too glad to quit the heights for the lowlands after a long campaign. Decamping from the old stopping place of Sherkel, General Westamcott had to fight his division** out with 42 casualties, and General Lockhart had to resort to the body count game, estimating 300 Afridi casualties. (Lockhart, 200--01.) He notes that, extraordinarily enough, artillery has to be brought into the game, lobbing shells at bunkers from two thousand yards and more. Get used to it, general, because it's going to get worse.

All that from a tribal militia imperfectly armed with obsolete rifles and using no more than 60 obsolescent ones. As General Lockhart notes (229ff), they will get Lee-Enfields soon enough. In ten short years, the Pathans have given up their old way of fighting, a sudden rush with sword and shield, and taken up modern fire tactics, grasping the need for covering fire to suppress defenders while working in from the flank in skirmishing order. Lockhart may choose to blame British army training for this tactical acumen, but the fact is that these traditional mountain tribes had learned modern ways, and learned them quickly, when they went to things that actually mattered to them.

Fantasists in the cities of the low country imagined that it was all down to provocateurs sending modern arms into the high country, and that if diplomacy couldn't stop these nefarious foreign agents, an all out war with Russia might be in order. From this I might draw the lesson that "Neo-Conservatism" has a history. Or we might all draw the lesson that humans interact with their environment in a technologically mediated way. The greater range of the modern rifle meant that the landscape architecture of the coercive state had just been banished from the western Zomia. Until further technological progress changed this state of affairs, the Frontier would be essentially ungovernable.

Or the state could find a non-coercive way of governing the Afridis and their fellow Pathans. After all, in not-so-Soviet Wales, the mountaineers fight for you!

Oh, who am I kidding. That's crazy talk. Governing the Pathans the way they want to be governed would be too much work.

*And as long as I'm providing off-the-beaten-track tourist destinations....
**That's right, a divisional-level battle during a corps-level campaign on the Northwestern Frontier. And not the last one to be fought there, either.
Posted by Erik Lund at 2:24 PM

Email ThisBlogThis!Share to TwitterShare to FacebookShare to Pinterest
Labels: Fall of France, Holidays, It's All About Me, Substructural History of Strategy