I Would Run Away to the Air: The British Economy, Montgolfier to 727, Part 1

So I thought that scenes of anachronistic hot-air balloons were a B-movie/animation trope. And they probably are, but thanks to the publicists for The Aeronauts, actually finding one turned into a fifteen minute hunt. On the one hand, thanks to Andrei Tarkovsky for putting a balloon into the prologue to Andrei Rublev and Youtube user Eagle Burger for putting it up. On the other, thanks a bunch to the producers of The Aeronauts for spending all that money on spamming the Internet instead of making a good movie.

The question that I meant to foreground with that interpretation is, "Is there a history of technology answer to the question, Why did the Montgolfiers come when they did?" It's sort of a science fiction question that took me back to the afore-mentioned hunt around the Internet that failed to turn up any cavemen in balloons, an answer, which appears to be taffeta --and not an economically endogenous "free lunch" of pure innovation arising from the-superiority-of-the-White-race-Shit-I-can't-say-that-"culture," as the neolibs would have it. (In an unarticulated way.) Fuckers just won't go away. 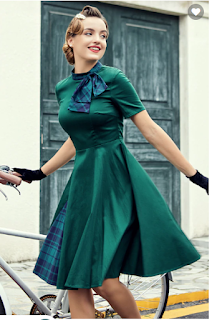 So we can all agree that by 1783, the Industrial Revolution was well along. The steam engine is thoroughly invented, we've had the flying shuttle, we've got the exciting part of the history of railroading in Britain where there aren't any railroads yet. Or if you don't want to riff on a half-remembered joke that you can't even reference, the "Age of Navigations." The authors of the Wikipedia article drag the Montgolfier brothers into the story via the family paper manufacturing business, which seems appropriately modern and innovative. But they made their hot air balloons out of taffeta. The Wiki says that taffeta has been made in France and Italy since at least, well, the Montgolfiers, and that the word itself is from Persian. Fashion history adds the detail that it was first woven in the Attabiya of Baghdad sometime in the 1100s, which seems like it is going to introduce us to a lost history of fabric making, since surely medieval Baghdad had a flourishing rags district and trade, and it sounds like this UNESCO explainer is going there. Unfortunately, it turns out to be purely etymological, going vial Seventeenth Century London swells dressed in "tabby," to slang for the prostitutes they habituated, to the modern "tabby cat." 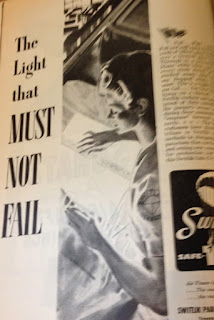 This sounds like the kind of anecdote that old time OED editors would enjoy too much to fact check, and is as dead-endy as dead-ends get. Taffeta is a twisted, woven (originally) silk cloth. It looks nice, has as close to zero permeability as you can get with animal fibre, and was still being used for parachute silk in WWII. Like all the other fabrics made in England proper (no Scottish jute mills or Belfast linen makers need apply), it is by definition not of the slightest interest to industrial history. A "quilted taffeta bedspread" turns up in the story of Darnley's 1567 death, at which point the narrative of taffeta as an exotic Middle Eastern import will serve as well as the Queen's Consort being "alive in South America somewhere." By the Montgolfiers' time it had gone native in the silk-producing countries of Italy and France, and I am willing to bet that they had improved the finish in such a way as to make it a better aerodynamic cloth. Could be right about that, could be wrong. It's not like anyone is investigating trivial questions like "who innovated what, where" before launching into Big History projects.

. . . Which brings us to "Victorian Britain, workshop to the world." 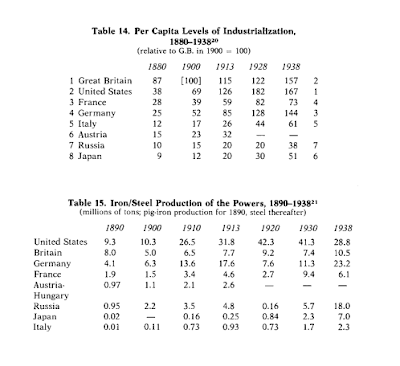 They're from a classic old-timey panic-book, Paul Kennedy's The Rise and Fall of the Great Powers: Economic Change and Military Conflicts from 1500 to 2000 [1988], which was about how all of America's pomp of yesteryear was about to melt away, like Nineveh and Tyre, based on his super-scientific method of wild-ass guessing the GDPs of the great powers of old based on what few statistics economic history could scrounge up. Britain's decline is one of his case studies, and this particular juxtaposition of charts, using known figures of iron and steel production to, as I say, wild-ass guess the "per capital level of industrialisation," is both an example of his technique, and the story about Britain, specifically, that I want to highlight today. So as much as I would like to ridicule a book that predicted the imminent end of an America-dominated world that came out in 1988, and at least implicitly invoked Japan as its most likely successor as paramount world power, I am going to have to stifle it. The man is one of A. J. P. Taylor's students, so he had some pretty big shoes to fill.
So let's look at the second chart, instead. Famously, it tells the story of Britain's retreat from its status as "workshop to the world" through what is supposedly the definitive index of production. Great powers are manly, and you don't get any manlier than iron and steel production! (Must . . not . . .link . . to . ..Simpsons.) The move from indexing pig iron production in 1890 to "steel thereafter") seems pretty dubious, but it does give our "America overtakes Britain in 1890, Germany in 1900[asterisk]" a smoother flow in the trends. The American crash over the 1930--8 interval can be written off to the Depression, as long as we don't set some  kind of trend that will lead us to writing off the German overtaking of 1938 to the opening of Reichswerke Herman Goering, or, for that matter, the Anschluss.
The particular problem with this charge is not my astonishment at the vigorous rebound of the British steel industry after WWII, which none of my undergraduate reading in the subject of "Great Powers, Rising and Declining," led me to expect, but rather Engineering's old go-to photograph of massive grids of high-strength, heat-treated, manganese steel rails for major street intersections, which went in around northern England in the course of the 1930s to replace fifty-year old Bessemer steel pieces, fabricated in place. Not all steel is the same, and for these charts to be useful, we would need to break production down in much greater detail.  Here's a basic discussion of rail steel for the home hobbyist.
But is this story all that helpful? It is difficult to measure the relative size of national economies or economic sectors within that economy as far back as the Nineteenth Century. In Britain, or England's case, we would want to know about mining, agriculture and services as well as industry, and we would have to dive into the sticky matter of "invisible exports."
In the latter case, we have all kinds of "invisible exports," from investments in Barcelona tramways to shipping to finance. In general, we're a bid queasy about Third World bonds, all in for shipping, and would love to not talk at all about the "vampire squids" of finance, where anti-Semitism always seems to lurk on the one hand, and savage imperialist exploitation, on the other. (It rather shakes ones confidence in the benevolence of the British Empire to learn that the Indian peasantry's per capita access to "foodstuffs" fell between 1871 and 1947, for example.) Fortunately, no-one understands the classic gold standard, Bretton Woods, or the mid-century London stock exchange, so we are spared of having to talk about it.
Hey, did you know that Jinx Falkenberg was born in Barcelona, spent her early years in Santiago, Chile, went to Hollywood High School, and was a "lifelong Republican?" Clearly her new radio show was the most important news story of the week of 25 August, 1947! 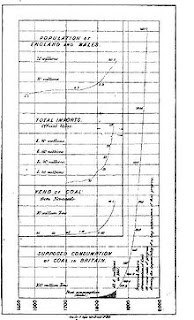 But is there more to the story even than this? In 1865, William Stanley Jevons' The Coal Question, introduced the idea, that, in effect, the growth of the British coal mining industry was a free lunch for Britain that could not go on indefinitely.  In the absence of better statistics, Jevons draws a series of exponential curves of growth and says, in effect, "what about that?" The inference is that "coal," and not cotton, finance or shipping, is "the source of the UK's prosperity and global dominance."
Cue The Economist talking about how if the industry could just scare up ten million tons of coal for export out of the 200 million being hoisted, postwar Britain's balance of trade issues would be solved. As Jevons wrote in 1865, "[H]ow shortened and darkened will the prospects of the country appear [in fifty years time], with mines already deep, fuel dear, and yet a high rate of consumption to keep up if we are not to retrograde."
Jevons does a good job of capturing the problem of ever-rising marginal costs of production in his characterisation of  a future of "deep mines" and "dear fuel," but misses what is now a classic problem of the "natural resources curse," its effect on the exchange rate, the key mechanism of what The Economist identified in 1977 as "the Dutch Disease." Assuming that Britain was afflicted with the Dutch Disease in the last third of the Nineteenth Century, when sterling stopped trading at a reliable premium on its official gold standard value, per the sixty-year-old data of Davis and Hughes, we have what is very much an alternate story of Britain's decline as "workshop to the world," and an explanation for its brief-lived post-WWII recovery between coal and North Sea oil. It's all about coal. (And an orgy of foreign investment based on that high sterling exchange rate.) this doesn't explain why rapacious exploitation of the Indian peasantry would be part of the story, except that if you can get away with it, why not?
Posted by Erik Lund at 12:50 PM