Old Europe: To The White Tower

That's the Danube on the left, the Sava on the right. Since that might be confusing, here is Google Earth, picking out the route from Venice to the White City: 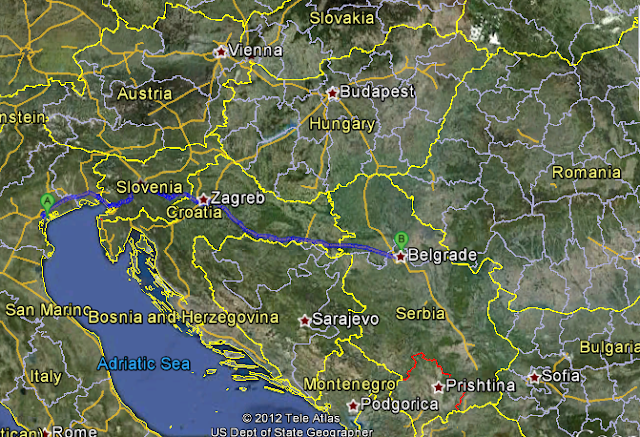 And now that we're oriented, here's the town and its rivers, with the road from Venice coming in from the left: 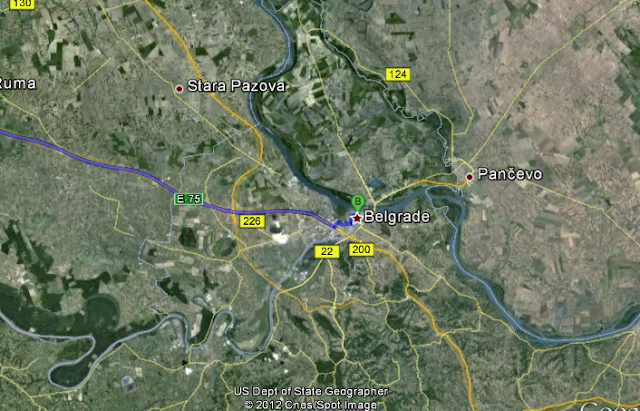 At this scale, you can see the Sava entering the Danube from bottom left, and the course of the relief canal that cuts out the meander on which Belgrade sits. I would imagine that if you descended the Danube in flood three hundred years ago, it would be a matter of choice whether you found the city on the blue Danube at all.

The Sava is another matter.

The Sava river is, according to its fans,* the third largest of the Danube's tributaries, and its largest tributary by volume --a calculated 55,000 cubic feet per second at average flow, says Wikipedia. To put this in perspective, the Rhine's basin discharge is only 70,000, and the mighty Mississippi is only ten times larger in normal flow. This is because the Sava drains the entire Dinaric Alps on its right bank, and the Julian Alps from its headwaters. That's a lot of mountains.

Traditionally, the Sava rises at the Zelenci Pools near Podkoren in Upper Carniola in Slovenia at 2700 feet above sea level, hard up against the Italian border and high above the Friulian plain, but its tributaries reach far back into the Slovenian mountains, almost to the foot of the Loiblpass through the Karawankes themselves. Just to the west, the Isonzo rises in the Julian Alps. Their tributaries continue to play footsie as they descend through the hard limestone mountains. On either side of the Postojna Gate, they are separated by only a few miles and a pass with a summit under 2000 ft.

The gate is a thousand feet above the first major town the Sava encounters, Ljubljana, the capital of Slovenia and the Iulia Aemona of the Romans, where Legio XV Apollinaris was stationed until 115AD.** This rapid descent is not to be characteristic of the river, however. Belgrade has an elevation of 384 feet compared with Ljubljana's 984. Six hundred feet over six hundred kilometers is not exactly torrential. Moreover, the river follows the edge of the Alpine orogeny for much of its upper course, with a marked different between its right and left banks. On the right are the hard, limestone heights, water rich and well-forested, while on the east stretches the marshes of Pannonia, all the way down through Zagreb to Sremska Mitrovica, the Sirmium of the ancients, birthplace of 10 Roman emperors,*** and on to Belgrade. The Sava is navigable for small craft as far as Zagreb.

Wait. Hold on here. There is a river road with a single, low pass on it, leading from a major Roman fortress city in northeastern Italy to Belgrade on the Danube. Let me repeat that: if you want to travel overland from Rome to Istanbul, there are precisely two major obstacles to overcome: the Appenines themselves, and a 2000ft pass between Aquileia and Ljubljana. If you want to go by water, then, after the cutting of Trajan's road through the Iron Gates, you only have to walk between the lagoons and Zagreb, a not inconsiderable, but also hardly insurmountable 231kms, measured by road from Trieste to Zagreb.

As historians of World War Ii, we know this route as Churchill's "soft underbelly of Europe," and we make fun of him, which we might as well continue to do for geopolitical reasons having nothing to do with routes and elevations. As casual historians of Antiquity, we apparently know nothing of it. The military road from Rome to the Middle East runs through the Balkans. It's an easy and convenient route.

And there's more! Czech national historians are deeply, deeply committed to the idea that there existed, in Carolingian times, a Slavic state that they call Greater Moravia. And why shouldn't they? It's true. We know of Greater Moravia from Carolingian and Byzantine sources both. The tricky part is that in 1995, American medieval historian Charles R. Bowlus published Franks, Moravians, and Magyars: The Struggle for the Middle Danube, in which he proposed that medieval Moravia was actually a state based at Belgrade.

Now, nothing could be less surprising than encountering a placename that appears in several spots around Europe.:(Bologne/Bologna, for example. However, a Greater Moravia in Serbia can't be the progenitor of the sacred Slovakian motherland, and to call this tome an unbook would be to understate the reception by the only reading community that cares about the medieval history of the Pannonian forelands. (A few Hungarian writers have taken cognizance of the work to endorse it, but the Slovaks have the upwind position in that particular "who oppressed who" most pissing match.)

All of this is terrible, because Bowlus starts with the only staff ride through this particular region that I've ever seen in modern literature.**** And Bowlus has a very compelling position that the lay of the roads and the trade routes shows that the Carolingian Empire was oriented to the southeast, which would have made it very difficult for it to operate to the northeast. As well as pointless, one might add. Bowlus notes that even some of the key Roman routes that we take as north-south roads were actually east-west. For example, the Romans did not build the necessary bridges to use the Brenner Pass north-south until the time of Septimius Severus, but they were already using it as an east-west route.

The mountains where the Julian and Dinaric Alps come together, and where the Alpine orogeny turns to bend so sharply southward, are laid out approximately as a star, so that someone seeking to go east from Rome towards the centre of civilisation is set on a path that can also lead north and west. And such paths surely existed in the early Iron Age, Bowlus points out, because the Hallstat salt industry must have counted the stockraisers of Pannonia as amongst their markets.

Or, well, I'm using that "must" word to describe prehistory. It's as bad as reading around the central thesis of a book that, while it persuades me, does not persuade those most expert, if also most biased. But that's what I'm doing. There is no doubt that the Carolingians expanded into and through this star complex and emerged on the Pannonian forelands, their axis of expansion pointed towards Belgrade and Istanbul beyond. Then, according to the nationalist reading of history, they took off in a tangent towards the Carpathian rise.

It seems more plausible to suggest that they were aiming at Belgrade, that the Sava road has put the White City in the middle of the world, between Italy and the Atlantic Basin beyond, and the Middle East. And we've forgotten that. The list of  10 Roman emperors born at Sirmium, near Belgrade, is often taken as showing the rise of "soldier emperors" due to a "military crisis." But that's not quite how politics works: in politics, the people at the centre of the action to begin with rise the highest. Or, at least that's my impression.

It all just makes more sense if Sirmium is the centre of gravity of the Roman world. And why shouldn't it be? It's in the middle.

*I know that that's a facetious way to describe geographers, but it's the impression you get from the statistics-mongering.
**(If we follow the road eastward, we find the Isonzo collecting the mountain rivers of Friuli and making them easier to bridge in a single go. Until 535, the crossing was at Aquileia, but the river changed course after a landslide in that year, and the old Roman fortress city fell into decline.

****There are actual staff rides of the region, but they're buried in the Archivo Bellico di Venezia. Once again, history is deeper and richer than we have the energy to research.
Posted by Erik Lund at 2:11 PM

Email ThisBlogThis!Share to TwitterShare to FacebookShare to Pinterest
Labels: Fall of Rome, In which I meander, Old Europe, Ultimate Secret