Nowhere Near Willow Run: A Not Terribly Technical Appendix

Let's get a sense of the stakes here. It's the dawn of 1943, and the Secretary of State for Air has another item on the steadily lengthening list of things that the leader of the Liberal Party has to argue with the Prime Minister about.

Specifically, he needs to continue persuading Winston Churchill to let the Eighth Air Force continue daylight bombing operations over Europe. This is not the balance of power, within this alliance or within the still-building Pentagon. Why is the USAAF's bargaining power so weak? Because General Eaker has to be persuaded to put his ass on the line and commit to 3 100 plane raids in the next month. Eighth Air Force is weak. At the end of next month, it will normally have a little more than 300 planes on hand, of which fewer than half will be available to sortie on a given day. This is the month when employment in the American primary aviation industry will reach 1.6 million, with an additional 1 million in primary subcontractors and 560,000 in secondary.(1) It's still the third largest industrial sector after can-making, but the past is a different country and all that, and it's enough for an annual production of 30,000 bombers out of a total of 80,000 aircraft.(2) Richard Davis estimates that the United States could have had another 29 armoured divisions for the cost of building up its strategic air force. And right now, that investment is delivering all of nothing to the war effort.


The broad outlines of an answer are obvious enough. The United States is just a year into war, two years into mobilisation. It doesn't have enough planes yet. Eventually, it will have too many.

So, looking back, the strategic theorist asks, "Could American planners have targetted a number between "not enough" and "too many," reached it faster, and fought a shorter war, to the extent that the strategic bombing offensive shortened the war, and a less expensive one?"

On its face, the answer to that question is that they couldn't, because they couldn't determine how long the war would take. The problem was not to have a given number of aircraft at the end of the production run, but rather each month. Production would have to meet attrition at the force level required to do the job. Any surplus of production to attrition would lead to a gradually-increasing aircraft surplus.

So the issue here is month-to-month effectiveness and loss rates. This blazing insight first occurred to the prewar wags at Kingston-on-Thames who suggested that they stop building Hurricanes and make SE5s instead, since the labour effort of producing an SE5 was so much less. Mind you, the Hurricane was a more effective plane, but given that apparently the entire role of the air force is to machine gun and bomb enemy ground forces, is all of that extra speed and climb really necessary? (That's the kind of hilarious  joke that we "Fighter Mafia"* types like to tell each other, with our obsession with machine performance over really big guns.

*Full disclosure here: I'm not really a "fighter mafia" type, but I do find it dispiriting that Google autocomplete will, indeed, finish the "All the Air Force needs is an A-10" search term.

Again, this is an argument that is obvious enough when pushed to its limit. A USAAF with B-52s vice B-17s would have busted up Germany real good, and expensive as B-52s were, it is hard to believe that planners wouldn't have been able to cut a few armoured divisions out of the fat of peak Eighth Air Force, with its thousand+ plane raids.

Is there a problem? The future Air Chief Marshal Sir Arthur Harris thought so, writing to Wilfrid Freeman from Washington in 1941 that


“[T]he arrogant American assumption of superiority and infallibility makes it hard indeed to get them to accept even our ideas –still less our help or our material demands. . . we have been living in a fool’s paradise where expectations of quality and quantity in American production and releases are concerned. . . however if the war goes on long enough the sheer weight of production made possible by their unlimited resources and manpower should make up for it in smothering effect. As to production generally, up to date they have had a damn fine war on British dollars. . . they are firmly convinced they are taking a major and direct part in the war . . . they are convinced of their own superiority and super efficiency and of our mental, physical and moral decrepitude. . . there has been no inkling of any interference with their own high standards of living. .... (3).

But I only bothered to type up that quote to set it against a more frequently cited one from 1938 praising the American industry and Lockheed in particular. Harris had ....forceful... opinions. That doesn't make them right.

More telling are writers who actually stick to the facts. In an article published 70 years ago this month, Martin Bue finds that in comparison to American equivalents, German instruments and accessories are 10–15% lighter, armament equipment 50% lighter, engines 9.5% lighter, and that the light weight is due to design, as load factors and standards in German machines are equivalent to American. Bue points out several specific examples of detailed improvements, for example a  16% lighter hydraulic pump at a saving of 3–5lb per unit at Pump Engineering Company, and a saving of 60 lb/ac in nuts and bolts per B-24E produced at Willow Run thanks to BootsAircraft Nut Company.** 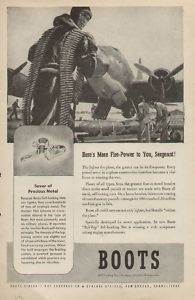 So how do you make lighter nuts and bolts? Believe me, this is not a small issue. Wartime numbers of Aviation and Aero Digest groaned under the weight of advertising far greater than even the slick paper consumer magazines of my youth, which you young folk today would never believe, and ads for lighter nuts, bolts and screws were pretty common by the late years of the war. Better design, better materials, better finishing treatment all contributed. The improvements to be achieved here can be extrapolated across a wide range of subcontracted materials and at the primary producers, too. It's not just nuts and bolts. It's everything.

So if American industry has fallen behind German in weight control across a wide range of products, it is clear that the problem is systemic. In a widely-cited article that apparently condenses an entire monograph, Irving Holley traces the history of the development of the aircraft turret in the United States and notes that the USAAF completely failed to develop weapon systems equivalent to the ones existing in Europe in the prewar years, and that, in the absence of state-led development, industry took up the slack.(5)

Unfortunately, he's wrong. British gun turrets were electro-hydraulic in operation, and the Americans couldn't copy them because they were still whipping their high-pressure hydraulic industry into shape in 1940--45. Instead, they used an all-electrical system based on amplidynes supplied by General Electric.***  Unfortunately, while General Electric vehemently argued that their amplidyne was a completely new invention that had nothing to do with Italian scientist Joseph Pestarini's visit to their labs in 1938, the Pestarini's 1952 monograph, Metadyne Statics (1952) baldly claims the amplidyne as a type of metadyne, so if GE doesn't want to give the misleading impression that there was a private patent infringement suit settlement in there, it had better get to suing sometime soon....

Oops. Well, my "Patent Troll" tag hasn't been used in a week, so there's that. Anyway, the point is that while the American War Department had nothing to do with the development of the amplidyne for military applications, those poor sods at their Italian equivalent did, indeed, fund the technical development of one of the weapons soon to rain death on them from above.

It's a well-worn refrain around here that state-driven research and development for military purposes entered the civilian economy through the war effort both as new tools, techniques, and products, and as new skills. Bringing the focus around to something as simple as nuts and bolts makes this a little more clear, even if I did promptly confuse the story by dragging a metadyne through it in the interest of reasserting the primacy of the state sector. That doesn't get us to the social process of making aeroplanes.

The story here is the way that an economy takes what is meant to be a product of pure exogenous strategy and turns it to its own ends. Sure, a better B-24, built in small batches at Consolidated's plants in San Diego and Dallas might have dropped more bombs on Germany at less overall cost and even fewer casualties. But, then, Ford paid better. And there is Willow Run.

As part of Ford's larger River Rouge complex, Willow Run was as much about real estate development as anything else. Ford wanted a new plant to build B-24s at, but he also wanted it at Willow Run, a Ford family-owned farm between Ypsilanti and Belleville,  34 miles from downtown Detroit. Ford seems to have assumed that his workers would commute to River Rouge by car in the short term, and move there in the long run, and he really wanted to build a new factory to the new and demanding "blackout" requirements, which, in effect, meant entirely artificially lighted and ventilated.

It's not exactly news that factory builders look to extract extra value from the location of their plants. It seems to have been an important issue in Bolton's decision to build his plant at Soho way back in the dawning days of the "Industrial Revolution," and it's not like Ford's motives were terribly sinister, or even that they ran against the currents of the time, except insofar as his employees had trouble buying new tires during the war years. The takeaway here is that Willow Run built for the air force of a country that was moving in the direction of having manufacturing sector employees commuting from one edge suburb to another.

And, somehow, it reinforced that trend. Even the skillset it produced went in that direction. The plant itself was all about deskilling, but the people who worked there practically had to build their own homes around Willow Run to make the place work, even as they adapted and developed the building to the somewhat unforeseen needs of the B-24. Sure, the plant was supposed to be about building planes. But, somehow, it turned out to be about building the new America of detached single residence homes in commuter suburbs instead.

Against the self-interest of entrepeneurs and the labour force, the Air Ministry labours in vain. Oh, sure, America had then, and still has today, a high tech industrial labour force, presumably descended from the Consolidated San Diego workforce, more-or-less. But that workforce is less important to the national economy than the whole housing>construction>automobile nexus that Willow Run reinforced. Is that a bad thing? Time and global warming will tell, I suppose.

*Full disclosure here: I'm not really a "fighter mafia" type, but I do find it dispiriting that Google autocomplete will, indeed, finish the "All the Air Force needs is an A-10" search term.
**I've never had the chance to use this little factoid in an argument with Eric Bergerud, so I might as well put it here!
***You know how an electrical engine/generator works? Put a current through a loop around a magnetic bar, and the bar will turn, or, vice versa, rotate the bar to create a current? Now imagine a similar device with a more complicated winding off at an angle or something, so that the current has no effect until you put another current through another winding to bring the first winding into alignment, to an extent proportional to the strength of the original current. It's a controller with an amplifier built in. Very elegant engineering.