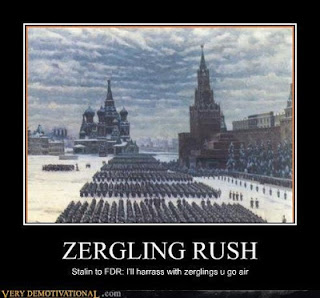 Some people go the long game and build up their skills. Others scrape. We'll see how that goes.

I want a graphic, and a semi-relevant thumbnail for this blog post to be semi-relevant, so because I don't mess around at Cheezburger.com, much less Funnyjunk.com, there is an excellent chance that you'll be staring at some kind of "no image available" graphic when this goes live.)

So this post has a triple motivation. First, using the Google to find out if anyone was doing the "history of buckwheat" eventually turned up the work of K. A. H. W. Leenders.* Second, in a highly sleep deprived state, I attended a barbecue thrown by an  old college buddy this Saturday and zoned out listening to his son talk about anti-Zerg rush tactics. (Such explanation as might be required. I do not, by the way, agree that Stalin practiced the Zerg rush. That would be more the Axis style.**) Third, I became aware of the Titan HD game app released by Valley Games. It is entirely a coincidence that I sat down to begin writing at 4:20 this afternoon.

The rush is famous from Starcraft, but it is a strategy every gamer knows. Do you build towards the end game, or pre-empt it by attacking early? It's not just that you will play games where someone groups the gargoyles in the Titan stack and goes for a fast win. It's that the possibility of the rush conditions just how far you can push the long term. Knowing that someone can come at you early means that you cannot invest as much as you like towards the end game payoff.

But, okay, buckwheat: once again, I am talking about an alternate field crop. We understand the grain-and-gold nexus of the cameralist state. Gold will be dear (will buy a great deal of grain) in a bountiful harvest, and cheap when the harvest is bad (a small amount of grain will buy a lot of gold), so that farmers will hoard buy gold when the harvest is bad and hoard it when it is good, and it is the task of the state to intervene in the market to even out grain prices and tax away gold to even out a process that is constantly at risk of tipping out of equilibrium. In the 1960s, when the United States launched into its benighted effort to stop communist dominoes in Southeast Asia, anthropologists were unleashed on the "primitive rebels" of what James Scott calls the Zomia, upland South Asia, and the result, as we all know by now, is the discovery of the "art of not being governed," the flight of peasants up the contour grid away from the rice paddy state when it fails them, and down towards the basins when it offers them prosperity: an ongoing process long masked by primitive romantic myths of migration and autochthonicity. The question then to be asked: how does this story play out in the Atlantic Basin?

Above all, because it weighs on us still, the process whereby the grainfield state abruptly metastatised in the Old Northwest in the 1790s and expanded to span the Great Lakes-Ohio-Mississippi basin. I have previously laid out my understanding of how this happened, but I'll do it again here.

in the first act, Josiah Harmar out 1453 men from Fort Washington on the Ohio River on 7 October, 1790 in a classic fall burn-the-granaries campaign. Per Wikipedia, not far from the modern Fort Wayne, Indiana, on 22 October, Harmar committed 400 men under Colonel John Hardin to a fight in which they took 223 casualties, including 114 dead. This signal defeat led to a redoubled effort in the spring. This time, General Arthur St. Clair was in command of another force of approximately 2000 men, directed Kekionga. Instead, he suffered St. Clair's defeat at Fort Recovery, Ohio, where apparently Little Turtle leading a thousand Indians through the teeth of American American musketry and artillery to expel them from high ground and a stream line defence. Wikipedia asserts a 90% casualty rate, at which point I kind of throw my hands up in despair at the death of all critical history and turn to Project Gutenberg, where William Henry Smith, the more sympathetic biographer/annotator of the St. Clair papers allows many extenuating factors before boiling it down to this: "the killed and missing numbered thirty-seven officers and two hundred and fifty-two privates; the wounded thirty-one officers and two hundred and fifty-five privates.Wikipedia additionally accounts for 200 camp followers "slaughtered."

Bereft of a better explanation, Mr. Smith offers conspiracy, weather, and craven militia, but on a per head basis, we need to account for a great deal of attrition. Up to the moment of battle, this is allowed under desertion, but once bayonets are crossed, the narrative of race war takes over. Smith allows killed and missing, but a moment later, we have it "being said" that execution fires burned for days afterwards."  Little Turtle: honoured American and genocidaire.

Yeah, no, I don't think so. This looks like what happens armies are defeated politico-economically They dissolve, and counting heads is futile, at best. Move ahead now just three years to Anthony Wayne's victory of Fallen Timbers on 20 August 1790. The same combatants, the same base of operation, the same tactics. But this time, only three years later, Wayne is able to bring 4600 men to Toledo, Ohio, complete with Indian scouts. The Indian army dissolves: Alexander McKee reports a total of 19 dead. The Treaty of Greenville is signed. Wayne receives 150,000 acres along the Ohio for "his warriors."

What else happened, militarily speaking, in 1794? How about this: a glorious victory that does not prevent 117 (or 350) sail loaded with American grain embarked in Chesapeake Bay, "enough grain to feed France for a year." That's a lot of grain, and much that came out of the old Northwest would have funneled through the Hudson-Susquehanna portage that I suspect remained under the private control of Joseph Brant and the extended Croghan family.  Not that the private interest of a single family matters anywhere near as much as the inauguration of a new era, in which cheap American grain is going to fuel an eighteen year war, at the end of which America will be changed far more than even old Europe.

The basic reason for starting this discussion of the "Heathen Rush," apart from laying markers down against the future (here's my thesis, stated again, a little evidence added incrementally), is that it makes a natural departure for talking about buckwheat, an alternate field crop with  a much stronger American purchase than European. But enough of that: Old Europe, buckwheat, and the Rush.

So why is Fagopyrum esculentum L. called "buckwheat?" Dr. Leenders, immersed in the Dutch tradition, reports that sixteenth century Low Country historians were convinced that buckwheat was a new crop, even though we know that it was domesticated in Neolithic times, probably in Szechuan. This is clearly not the case, even for the Lowlands and the Rhineland. Buckwheat is found in Roman-era excavations, albeit in such small quantities that it might be a weed. At the same time, the sixteenth century tradition did not come out of nothing. Leenders notes that buckwheat is first mentioned at Deventer on the IJssel in 1389/90, and documentary reference suggests a 50-year long spread from there into  its traditional range. Many parish churches have monuments to the specific person said to have introduced the crop to supply buckwheat groats as a boon to the poor.

The monuments, however, are telling, as they associate the patron with pilgrimage. "Buckwheat" comes from the Holy Land, and this is the sense of "Black wheat." It comes from the lands of dusky-skinned people, Leenders concludes, noting the frequent alternative of "Heidencorn," heathen wheat. Here, however, we get another, more plausible etymological line. Buckwheat, with its low nitrogen requirements, is planted on "the heath."

So the link here, which constantly trips off the tongue of old Europe, links poverty, difference and bad religion with the deserted lands, the forests, the heath, but also, curiously, the residual Romans (the Waelsch) left in a Germanised landscape, and also iron production through charcoal burning.

So we have a model of the origins and development of the agricultural landscape at the cusp of modernity, which is of buildup. Per this picture, the farmer is concerned with end game infrastructure. Water power is for milling. Land is for wheat, the magic grain with the highest calorie density of any food, and a healthy load of proteins as well. Building is for granaries, an ever escalating project, until we get to Joseph's famous silos, which can feed Egypt for seven years, or, better yet, those of Frederick the Great, which issue twenty-year-old grain to his troops. (Fittingly, the granaries that Maria Theresia built to match Frederick's loom near the new Kriegsarchiv building.) the more granaries, the more gold you can get, to bury and then to plough into more and more grain to buy more and more bullion. Somewhere down the line, you're going to get to the end game and use all of this stuff, and it'll be awesome. Unless the game ends first.

Now here's the rush, at the end of a protracted build up of all the facts, deep into the end game. Instead of putting off the payoff, put your money on the heath, on the empty land, on labour-saving strategies. Be the first into the market. You've got your salt pork, your iron. That's the traditional product of the heath. Now you've got grain, too, even if your product is mere buckwheat groats. Now, scarce grain can't buy precious gold. That's why buckwheat is the salvation of the poor. Because it rushes the end game.

Is that the significance of the sudden explosion of buckwheat cultivation in the Lowlands at the cusp of modernity? I don't know. Could be. Is that why bringing the American "heath" into the game changes the rules at the turn of the Nineteenth Century. (If it does?) I don't know. I'm just laying the marker down. Should be enough for Bronze League play. Thorough polishing, laborious research and diamond tight exposition are for losers when you can go for the rush, man!

*F. H. DeVere Robinson has graciously turned in his "hardest to type name without diacriticals at Benchgrass.com" trophy for reissue.
**Obligatory: http://www.youtube.com/watch?v=lskNTCzdLNE
Posted by Erik Lund at 6:53 PM

Email ThisBlogThis!Share to TwitterShare to FacebookShare to Pinterest
Labels: Cheese, Goodbye to the Vikings?, Old Europe, Pirate History of the Atlantic