Postblogging February 1943, I, Technical Appendix: One-Adam-Twelve, Where Are You?

This is cool, even if they are French, notwithstanding the DAK-suggestive shorts and forage caps. The Brits had them, (Northumberlanders, no less) but quietly gave the idea up after 1940. Stupid Brits. Here is relief for all of your "Nazi Superman are our superiors" needs.


Vroom! Vroom! You can also clothespeg an old hockey card to the spokes of your bike for a taste of the good old stuff. You probably want to do that before you've ridden a heavily-laden motorcycle down a road like this. (Also, important safety tip: do not ride a motorcycle across rough ground in shorts.Also, important safety-related fashion tip: do not buy your leather pants for motorcycle use from non-motorcycle related paraphernalia retailers unless you are very comfortable with your sexuality. Word to the wise.)

Here's one more  look at the machine that I am implicitly contrasting with  the motorcycles.

It's so tiny! This is one of the Daimler Dingoes brought ashore at Dieppe by Second Canadian Division. That would encapsulate it were it not for the even more stinging account in Beale's Death by Design. It's an armoured car with no turret, not even a weapon! (Unless you count a Bren Gun, but, seriously, by WWII an LMG is basically a decorative element. Heck, they put them on Matador variants! ) Beale even has some timely quotes from stakeholders who thought that it was grotesquely underarmed, and a tart word or two for the men, apparently cavalry officers, who insisted on features like low height, equal-speed reverse gears and front-and-back steering, all at the expense of proper firepower. The same quotes even show up in Richard Meade's recent biography of Richard McCreery.

You'll note, though, that the NPOV Wikipedia article has no difficulty in describing the Dingo as "perhaps the best British AFV of World War II."

Now, this might seem crazy. Here's a thought experiment. Recon units are all supposed to be up at the front looking for things for the artillery to shoot at. So if an armoured car spots something worth an artillery shot, why doesn't the recon unit shoot it? Because it doesn't have a gun? Well, that was stupid. Give the next one a gun! The Daimler Dingo was 4ft 11". That makes it good at hiding. I know, I know, there's nothing manly about hiding. Well, unless you're playing in stealth mode, but even then you expect to be able to stab people. The Dingo doesn't stab people. It goes up, it looks around, and then it tells command what it sees, and none the wiser.

There is nothing more important to proper management than timely intelligence. My whimsical photoessay deserves some caveats, since armoured cars have other roles than reconnaissance, but taking into account the crucial importance of the reconnaissance role, you can see that the constant temptation to shut the crew up in a turret and lumber them with a Very Big Gun represents a tendency to lose the plot.

There's probably some kind of commentary on the human condition here. I do know that as a middle manager, one of the constant fights within our echelon is over access to timely, useful intelligence, and a never-ending deluge of process intended to extract it, process that is inevitably gamed.

Which is probably why the hugely important subject of military communications in World War II is not better understood. Attempts to study it sidle up to the subject, look it over, bounce off it in sheer boredom, and wander on to tangents. People exchange intelligence on radio? Let's talk about SIGINT! Forward air controllers direct close air support? Let's talk about air war doctrine! Tanks have to talk to infantry, and infantry to tanks? Let's talk about armoured warfare doctrine! Army communications go over cable and telephone lines via switchboards... Actually, you know what? There's no way to make that interesting. Let's pretend its happening in the background and move on to more interesting stuff, like what makes British generals drool, and German generals rule.

From the perspective of this blog, it's crazy. Radio was arguably the most important thing in people's lives in 1938, and the only reason it got less important after the war was that, I've been told, video killed the radio star.  World War II, you might think, might have had something to do with that. And that, in turn, might have some bearing on this world that we live in.

Anyway...
It only took sixty-nine years, but there's a book already! 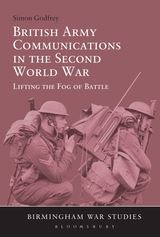 Not to sound ungrateful for Simon Godfrey's work. It's depressing to note that Godfrey is a "lifelong learner" who retired from marketing management type stuff to do a nice PhD thesis, because while we've got the thesis, we do not have a lifetime of scholarship to look forward too from him. If he got a job, that is. And make no mistake, because there is a lot of scholarship yet to be done. Wikipedia is getting ever closer to having all information ever, but this list of 33 British World War II-era army radio sets links to only two articles. One is to the most technically accomplished of them all, the No. 19.

Let us look at this. First, we have a dual frequency reciever/transmitter. HF allows formation control, while VHF allows intertank communications. Plus, there is an intercom, and, of course, the system uses laryngeal mikes and headsets so that voice communication can be heard over the engine. There is dual crystal and dial control for rapid switching between 20 pre-netted frequencies on the one hand, and searching up and down the dial for intelligent life, on the other. There is a wide power range, and the whole weighed less than 90lbs. It is interesting to note that it was co-developed by the Signals Experimental Establishment and pioneering British consumer electronics producer Pye, in a nice example of your old "military industrial complex" working in the consumer's favour for a change. (Click on this link for a sad story of missed opportunities) in 1940, which fair enough.

This is not going to tell you very much about the Model 19, but the source of the image might be more useful. Interesting, and its own way sad information: the Canadian version of the Model 19 console was bilingual --in English and Cyrillic.

The other is an otherwise little used short wave set included because it was favoured by the Long Range Desert Group. Cool!

And that's just the radios. As important as they were, Godfrey also covers wired communications. Coming out of WWI, the British Army briefly imagined a utopian future where everything was by radio, as befit a new and more mobile army. Gradually over the course of the interwar period, there was a reaction in favour of economy. This culminated with the 1935 Jackson Committee ruling, which recommended that the infantry would be dependent on cable communication under all circumstances. At the same time, the Royal Corps of Signals improved both the quality of cable and switchboards and the speed of laying at least as quickly as radio equipment improved. Godfrey could not find the Jackson Committee's terms of reference in the archives, so it is not clear how much this improvement was taken into account, above and beyond the presumably decisive issue of economy.

What is clear is that the Royal Corps of Signals was understrength in the prewar era, and throughout the war. This was a boon for regular soldiers, who got a  look in to the radio business when they substituted for signallers who were not available, but it cannot have been good for military communications. (Except insofar as it might have kept middle management channel bloat under control.) Godfrey even notices the training regime of Signalmen Metson, Newland and Smith. Newland was an 18 year old of the 1943 class cohort. Godfrey does not make it clear whether Metson and Smith were in the same intake, but their experiences seem parallel. In any case, initial RCS selection was on the basis of good scores on basic reading, mathematical knowledge, manual dexterity and problem solving. Good scores bought all three men out of the horrifying meat grinder that was regular infantry service in Normandy.

Newland, perhaps the most interesting from the perspective of my "economy of knowledge" thesis, received a 16 week basic instruction, learning to repair radio transmitters and receivers, battery chargers and telephone equipment, including small switchboards. Basically, he was trained, quite intensively, to run a radio/television repair shop -- a good career for Newland's time in the race, although he would have been well-advised to move into computers in his sixties. Interestingly, Signalman Smith, of the same intake, had an even longer course on the way to becoming a wireless operator: more training for far less civilian use. Signalman Metson was trained as a driver mechanic. While it is interesting from the point of view of what it tells us about wartime skills poaching that the School of Signals was running its own driver/mechanic course, the salient point is that the School might have gotten away with training its driver/mechanics longer than, say, the REME. (Godfrey does not say.) On the other hand, a tank wireless operator received "only" an eight week radio course.

Notice that we are also focussing on tactical radios here. Brigadier Angwin's article on "British Military Communications in World War II"  for the radio volume of the special number on wartime work of the Journal of the Institution of Electrical Engineers (Hey, military historians, Number 92! Anyone listening? Sigh.) focusses on the big shortwave sets for "global communications," as does the Green Book entry for the United States Signals Corps. (Although there's another Green Book, theoretically available online, on SIGINT. I couldn't get it to download.)

Generally speaking, I could easily tell a Whiggish story here. The radios of 1940 are scarce, under-utilised, and unreliable. One of the insights from the above-noted McCreery biography is just how dependent on unit experience was the use of radios by the reconnaissance/couverture units of the BEF. The effect of the decision to take the reconnaissance regiments away from the divisions that had them is usefully illustrated by the experience of 2nd Division, which somehow kept its. The armoured car regiments, both exercised in radio-controlled reconnaissance for the last decade, were hugely useful, and so was one of the composite light armoured brigades formed from the divisional recce regiments, while the other was just about useless.

On the other hand, not to get ahead of the story, the Allies landed at Normandy with a full set of new radios. Most were not going new into battle, having been deployed and tested in Italy, but they do reflect a major step forward in battlefield communications and control. Thanks, belatedly, to George Blackburn's memoirs,

we have a narrative tool of access to the development of artillery tactics that rendered the Allied guns such a powerful tool in the 1944/45 fighting, and we can distantly sense the importance of this transformation. We still lack anything like an industrial picture. There were never enough SCR-536s ("walkie-talkies" to go around) Motorola made 130,000 during the war, so clearly they were hard to make. One could make up a story from this about why the British did not make their own, the closest equivalent being the Mark 38. On the other hand, I literally just now discovered that someone has put a pdf of a JIEE paper by Anthony Davies up that might elucidate the question, but not today, as I am just about out of writing time.

On the other hand, we might not need a story. The walkie talkie was so compact in part as an antenna issue, and this goes to frequency. A VHF set, Motorola's design packed five vacuum tubes into its gigantic mobile-phone-circa-1980 design , suggesting fragility, overheating and battery life issues. Whatever: even if the SCR-536 had not worked (which it did), it was a great way to distribute experiential learning about the electronic world-coming-to-be throughout the army.