Prolegomenon III: Ammunition and the Supply Bottleneck on the Beaches

Goodwood was not an unprecedented operation in kind. Sedan saw the use of (two) entirely armoured corps in a break-in operation. It also featured a main effort by the heavy bombing force of the attackers. At Sedan this was only heavy by the standards of 1940, but decisive, in my view, because it cut enough cable to paralyse the defending French artillery. Alexander McKee, on the other hand, has characterised the preliminary bombing at Caen as the "heaviest air raid" in history. I doubt that it will qualify for this record when the B-52 carpet bombings of Vietnam and Desert Storm are taking into account, but that's only because B-52s can lift so much weight. By scale of effort, Goodwood really was the heaviest bombing in history.

The point of this post is that however we justify this in operational terms, it makes sense from  a logistical one because the aircraft could carry bombs over from England, whereas conventional artillery (of which a little more at the tail of the article) had to bring their munitions in through the bottleneck of the beaches.

This suggests that I need to talk about that bottleneck.


First, Quiberon Bay. It is more than just the place where Conflans was run onto a lee shore by bold Hawke, incidentally pulling his boss's bacon firmly from the fire. (Rodger has a good discussion, 280ff.) Not that I would ever suggest that George Anson was blessed as much by connections and able subordinates as by inherent ability. But surely it's a bit much to credit that he became only the second man to intercept a Manila galleon at sea in more than two centuries of operations without some kind of help at Macao?

Anyway, Quiberon Bay features prominently in the logistical history of World War II because while the Pentagon, as it was becoming, was skeptical about Mulberries and suchlike nonsense, it had a major crush on the inland sea of the Morbihan and the natural anchorage of 80ft depth scoured by the Auroy River opposite the fishing village of Lacmariquer, conveniently provided with a spur line of the Paris-Brest main rail line, so that an artificial port here, apart from not needing expensive and exotic towed temporary marine structures, would have rail clearance. Such are the wonders of Wikipedia that "Operation CHASTITY" now even has its own article, which notes an expected clearance of 10,000t/day, and a requirement of only 4000 man-months of labour to put in the necessary floating piers. 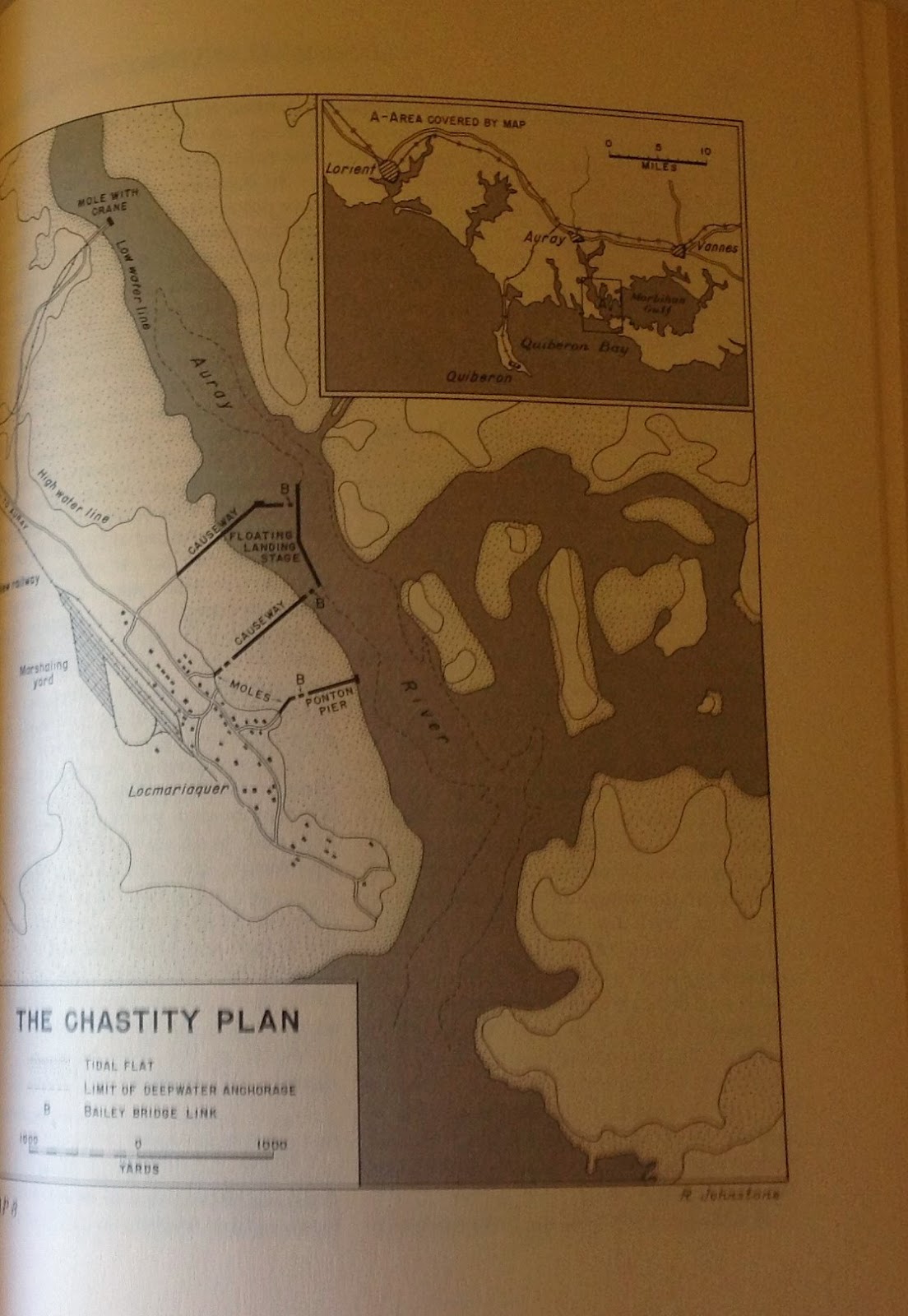 (Ruppenthal, 1:295). Moorage for 30 "deep draft," i.e., Liberty/Victory ships was intended, plus unloading berths for up to 4 Liberty ships by D+50. This was kind of key, because existing unloading capacity already exceeded the available supply of shallow-draft coasters. (Two-thirds of available British coasters were allocated to OVERLORD, on the hope that they would be released as soon as possible. (Ruppenthal, 2:125.).

Which is kind of an interesting point: if your high school was like mine, you learned that while quinqueremes are the logical transport for peacocks, apes, ivory and sweet white wine (Ophir must have been a very interesting place), coasters carry  coal, road-rails and various mongery. Put another way, coal and construction material. One wonders what Britain looks like as 1944 passes the solstice into the Sun's decline into another cold and threadbare winter, with all of its dirty coasters carrying ammunition to Normandy. I suppose it depends on whether you consider the temporary shutdown of at least a quarter of British blast furnaces to be a setback, or, on the contrary, an improvement.

Leave that aside for the moment, because whatever the consequences of taking up all of those coasters, CHASTITY is not going to be a solution. Work on it can hardly start until after the breakout from Normandy releases the American siege train to take Brest and Lorient, for the coastal artillery of these forts will interdict towage on the way to the Bay. (Or so the final argument for abandoning CHASTITY goes. Chronology suggests multiple explanations for the way that the clock ran out on the Quiberon Bay project, not least the fall of Antwerp.)

So there was a plan, and it failed before it had even been tried. As opposed to the plan, there was also what was actually being done, which was to land across the beaches and through MULBERRY B. How was that going?

Not very well. Here's an abbreviation and condensation of three pages of tables from Ruppenthal (1: 416--21), showing unloadings over the beach in the American sector. As these charts show, while cargo unloadings eventually exceeded targets and began to bring the cumulative planned buildup within range, vehicle and personnel unloadings lagged much more significantly from the targets set. (Note that D+15 is the middle of the storm, which is why the daily totals are so low.)

That the figures are so high is certainly a tribute to the men of the Port Battalions; but that tonnage exceeds targets while vehicles and personnel do not suggests a more complicated story. Or, more concretely and more relevantly to the story, that they are "drying out" coasters as well as LSTs and LCTs. Recall that "drying out" had originally been ruled out for fear that hogging would damage the hulls of LSTs and LCTs. These fears had been alleviated in part by the preparation of artificial hards, or intertidal earthen platforms on which ships and other vessels could rest nearly level. Northwest European coasters are designed to go into tidal ports, which, if lacking expensive docks and basins, require drying-out, and their hulls are designed for drying out in high-tide conditions. (They are short and round and full, while LSTs/LCTs are long and narrow. It is the Mediterranean/Atlantic, galley/hulk distinction, again.) That emphatically does not mean that drying out was a good idea. Even if it wasn't causing any stresses on the hull, drying out keeps a ship in place through a tidal cycle. Recall that the Lobnitz pierheads of the Mulberries could unload an LST in less than an hour; an achievement that any permanent quay/wharf/pier arrange could begin to rival. "Drying out" increases the amount delivered to Normandy specifically while reducing the overall logistical lift available in European coastal waters. It is not a tradeoff that will be felt in Normandy, of course. But....

So: to recap. As we prepare to tee off for GOODWOOD, the Allied buildup of vehicles and men has fallen well behind the tonnage buildup, which itself is at only 80% or so, taking into account MULBERRIES, British beaches, American beaches, and the quiet and quotidian work of Normandy's minor ports.

All of this, however, hangs on the implicit assumption that we can trust the tonnage clearance numbers. There is some reason to think that we cannot. The original plan for Normandy-side unloading would warm my District Manager's heart. (Hi, Mark!) It called for ships to arrive offshore, be identified, with manifests delivered separately by air. Staffs on shore would promulgate priority unloading targets, and ships would be "picked" for high priority materials. The need for this system became obvious with the failure of the German Air Force to appear over the beaches. There was no need for the preloaded AA ammunition, which would be only a pointless waste of labour and storage space.

Instead, the system broke down completely. Ships arrived unannounced, because of radio failures, and without associated manifests, both because of this and because of air liaison failures. Ships were instead picked by boats that came around to visually inspect the cargoes, followed by DUKWs and Rhinos which came alongside to unload according to staff priorities. The result was a desperate rummage through holds for mortar ammunition, for example, and a blunt refusal to receive AA ammunition at all --at either end. Ships therefore acquired a permanent debitage against their nominal carrying capacity consisting of orphaned AA ammo. How much this cuts into nominal unloading rates I cannot say --nor is it readily possible to imagine what the holds of these ships would have looked like after a few weeks of this kind of operations. (If it looks like an orphaned skid of over-ordered Pepsi, I would call that a problem, but my imagination might be running away with me.)

To substantiate the claim that tonnage targets might have been overestimated, I turn to the later case of Cherbourg, cleared and operated by desperate expedients without enough cranes or military operators, marshalling yard space, trucks or discharge: a backlog of 70,000 tons had built up by the end of August. (85) Colonel Sibley(?) OC Port, was relieved at that time. Typically of a bureaucratic purge, His replacement, Colonel Charles Strothers, is shocked, just shocked by the way in which  requisitions been inflated by including coal and rolling stock. He is also, per normal practice, to requisition more men and equipment to get the port operating at the target 20,000t/month clearance rate, since with a scapegoat in hand, the deficiencies of the initial plan can be admitted. (Ruppenthal, 2: 87, 101)

Into the fall, with 560,000t of the coaster fleet still in the sealift pool in November, turnaround at 135% of expected, and 20–25% coastal fleet was immobilised for repair, we can see the glimmerings of an emergent crisis.

At this point, I want to turn to ammunition. The British historian of the campaign in northwest Europe, unlike the American, has not closely investigated either the global munitions shortage that broke in the summer of 1944, nor the rationing applied in Normandy specifically. This is, I think, a reflection of the advancing state of the art in the great power official histories. Ellis's two volumes were deemed satisfactory when they came out. The Green Books revisited what was satisfactory, and the collective editors and authors of Mediterranean and Middle East took note.

That is, anyway, my excuse for reproducing/abstracting a table from the latter work and waving at it as though shooting in Italy proves a case about Normandy.

Abstract of an Extracted Table
@
It does, though. The takeway is that while the munitions crisis in America reflects the drawing down of war production in 1944 (just like Eliot "Calamity" Janeway correctly  speculates in the winter of 1944 --sometimes I only amuse myself--), the British munitions crisis also reflects (and probably so does the American) increasing efficiency at handling ammunition. I will have more to say about this as I discuss GOODWOOD, but note in particular the pickup in the rate of 5.5" and 7.2" use. The Commonwealth armies are not just using more ammunition. There is a developing trend towards using heavier weapons. Again, this bears pretty directly on GOODWOOD, and still more on TOTALISE and TRACTABLE. Mobile warfare turns out to require very heavy guns. Although, just as in World War I, it turns out to be the range these guns achieve that turns out to be more important than the weight of fire.