Are you tired of picturesque Ocean Falls, British Columbia? I know I'm not. This is Kimsquit Lodge, the women's dorm.

Let us say it's 195-- Okay, I've already used "194Q," so, let's say, "195R." That is, this the year that the future begins, so you are never actually there. You've been in Ocean Falls, man and boy, since before 1924, and you're thinking about next year, or the year after that. The year things start to move in this hick town. (The only Simpsons clip this could possibly link.)

So you're not overly impeded by reality, is what I'm saying. You can see the future. The company brings in unattached women to do women's work. (You know: staff the cafeteria, type, clean up. Obviously you don't put the nurses and teachers and head secretaries here. Obviously.)  They meet millwrights, they marry, they buy a home in Martin Valley. They get a car. By that time, the road is through. Their kids go through the class-enhancing magic of high school, and drive the 600km or so to Williams Lake, the 1200 or so to university to Vancouver. The 2500 or so to golden California and the kind of magical, middle-class jobs that people have been lighting out of the coast for since time immemorial --but now they can come back! No more people complaining about the isolation! Before you can turn around, there'll be one of those new-fangled "shopping malls" in town!

I don't want to make some German Indianer cosplayer squee himself to death or anything, but the burden of the picture is that Kimsquit was abandoned years ago. (Almost. James Sirois still lives there.) It's not the forest primeval. There's been some logging, and there's an air strip to accommodate fly in anglers.

If you can get away from that kind of thinking, you will notice that that's the Dean River issuing into the head of Dean Channel at 52 degrees 13 minutes North, and you will appreciate that this is nice farmland at the mouth of one of only three rivers that punch through the Coastal Range: the Fraser, the Skeena and the Dean. The first two host major seaports. (Prince Rupert has a container terminal now. That qualifies as "major," right?) So why not a third?

Because, we say now, in our diminished world where 195R never happened, because. It's just impossible. Not even worth bothering about. No-one's going to farm way out there, or build a railway connection. Or a town. We don't do that sort of thing any more. Better to leave the Dean River as a veritable Mecca of anglers, the place that makes every fly fisher's eye gleam at the mention, because of the superlative quality of the super-steelhead trout which inhabit this best of all possible rivers.*

Our booster/dreamer can be spared for not thinking that way, for naming the women's dorm "Kimsquit Lodge" as a step on the inevitable progress that leads to the moment (soon now!) when the road that links Ocean Falls to the world, the road that has to pass through Kimsquit anyway, climbs the Dean River valley to Anahim Lake.

From this distance, we can see the absurdity of this road that descends the Dean Canyon and climbs passes between  four watersheds on its way from Kimsquit to Ocean Falls. Looked at from the other side, the fact that the road goes through four heavily forested watersheds is an advantage. All of that fibre, tied to Ocean Falls forever!

Perspective: here's work on Wong Chee's Corner, the turn around the bluff that takes Ocean Falls Road from the townsite to Martin Valley in 1924, per the Ocean Falls Museum.

Here's work on U.S. 10, the later I-90, in Snoqualmie Pass, Washington, in 1950, from the University of Washington Library's Flickr account. 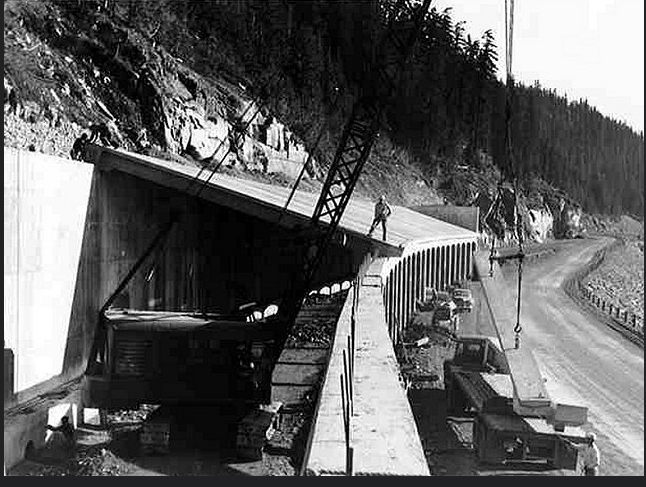 We're not even building interstates yet, but a bit of a change in methods, don't you think? 195R is the year when roadbuilding gets this easy on the road to Ocean Falls. It's year that never comes, a year as imaginary as flying cars.

In the imagination of Walther Model, briefing his Fuehrer on the evening of 25th August, the question was one of managing the withdrawal of Army Group B behind the Somme-Marne line in the respite given by The Allied halt and regrouping on the Seine. The Somme line would not hold forever, but it would provide a place on which to reconstitute the battered remnants of his command. Walther Model does not believe in 195R. But he is still wrong.

Model, too, imagines a future that will never be. a future where the Allies wear themselves out and reach an accommodation that lets the Third Reich keep some fraction of its spoils. Perhaps even Alsace and Lorraine. Germans tend to think that those provinces belong to Germany, anyway. Why not salvage some justice from a long war?

This morning,, while the world's attention is captured by the birth of the Fourth Republic in Paris, Canadians, British and American units close up the Seine.

Tomorrow, they will cross it, and end the dreams of a great German Reich forever.

Because they will keep going.

So what the fuck happened? Well, a beaten German army, of course. And air superiority, and good, fast tanks.

This post, of course, is about something else, about the mobile infrastructure that has emerged to build instant roads so quickly that bridging columns can practically advance as fast as the roads can be built. Not quite the magic of Graydon Saunder's Line infantry (buy the book here), but fast enough.

You need roads to reach the front. Sure, behind the static front of July, the Royal Engineers have built up a steadily-increasing "plant" of bulldozers, angledozers, "scrapers," "continuous-bucket scrapers," "blade or motor graders," "Ruston-Bucyrus No. 19 crawlers."

They have built a railway depot at Bayeux, and repaired the lines and bridges of Caen, and the Americans, not to be outdone, have built three rail yards to clear Cherbourg of the cargos accumulating there, but even with even with everything that has been done, the railhead is 35 miles behind the Seine on the day that the engineers get their ducks in a row and begin to build a new bridge across it, on 31 August. On 30 September, the first train will cross that bridge, and, ironically, it will be on its way to Antwerp, for this will be the last link on the main line to Antwerp to be completed. (Other bridges are smaller jobs for various reasons.) 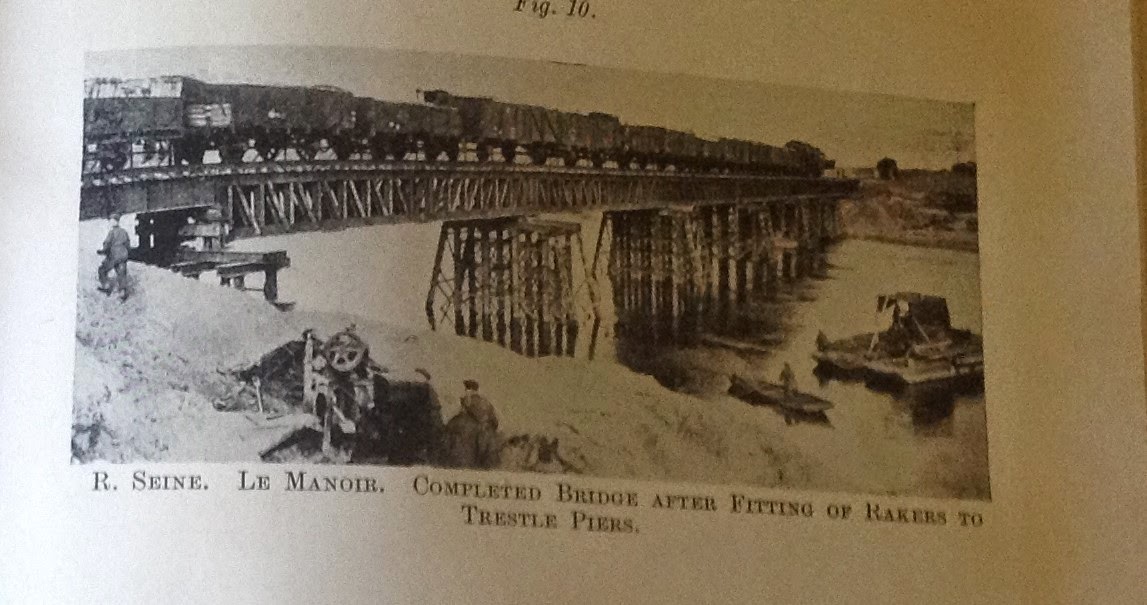 Nor does it help that the bridge is a bit of crap. The goofy trestles are the "camel's foot" thingies on which Tn. 5 devoted so much effort. They are necessary, because the bridge is being built clear of the encumbrance of existing bridges, and there is no time to sink proper pilings, but they even look makeshift, and will not survive the floods of the late fall. Notice, though, that the bridge is therefore only part of the story, because approaches to it have to be built on both sides of the river.

It is all very much to the credit of the Transportation Directorate and the mechanics of the REME, the two civil engineers reporting, J. H. Pooley and Henry George Follenfant** tell us. But it is also to the credit of the anonymous motor pool of trucks that move the materials. On the one hand, the design effort that created truck-mobile modular rail bridges is vindicated, even if the bridges are kind of awful in practice. On the other, it's a credit to the anonymous men of the motor pool. That's a lot of trucks, and, as the veterans tell us, most of them were driven by Black American soldiers, seconded to the "Red Ball Express" with no experience in truck driving, on the assumption that it was the kind of work that Coloured folk did in wartime.

Since something of a controversy is going to erupt on the Western Front in the next few weeks over the matter of supply haulage, it is as well to notice that underneath the debating generals and behind the convoys rolling up to Patton's advanced guard, the teach-yourself-to-do-it-while-you're-doing-it truck drivers and mechanics of the REME, RCEME and the Red Ball Express are doing their best to overcome the problem by advancing the railhead. Seventy years ago today, while de Gaulle hears a Te Deum in Notre Dame (and all honour to him, too, for all his infuriating quirks and suspect politics), it is these men who are winning the war, conjuring an entire rail bridge out of nothing --and this with not-exactly ideal equipment in the form of the 2 1/2 ton truck.

In other words, this isn't about equipment. It's about people, about skills, about well paid construction jobs. Enough has been learned in all of this to build a transcontinental interstate network. So why did 195R never roll around?