Next week, I need to talk about death by fire, on land, at sea and in the air. The week after, my March will be used up, since I'll need to do two techblogging posts in a row. In the mean time, before we visit the city that suffered in reality what we imagine happened to Dresden (bad as Dresden was), or an even more savage and inescapable fire that demonstrated once and for all that you cannot cram 90 airplanes onto 27,000 tons, let's do something fun. (I'd write "easy," but somehow this ended up taking up most of the afternoon on a day off, and I still have to shop for a new bike today!)**

Or racism. Racism is always fun.

From "Shadow Over Innsmouth:"

During the winter of 1927–28 officials of the Federal government made a strange and secret investigation of certain conditions in the ancient Massachusetts seaport of Innsmouth. The public first learned of it in February, when a vast series of raids and arrests occurred, followed by the deliberate burning and dynamiting—under suitable precautions—of an enormous number of crumbling, worm-eaten, and supposedly empty houses along the abandoned waterfront. Uninquiring souls let this occurrence pass as one of the major clashes in a spasmodic war on liquor.

Keener news-followers, however, wondered at the prodigious number of arrests, the abnormally large force of men used in making them, and the secrecy surrounding the disposal of the prisoners. No trials, or even definite charges, were reported; nor were any of the captives seen thereafter in the regular gaols of the nation. There were vague statements about disease and concentration camps, and later about dispersal in various naval and military prisons, but nothing positive ever developed. Innsmouth itself was left almost depopulated, and is even now only beginning to shew signs of a sluggishly revived existence.

Complaints from many liberal organisations were met with long confidential discussions, and representatives were taken on trips to certain camps and prisons. As a result, these societies became surprisingly passive and reticent...

You see, back in the old days, a patrician of the decaying New England port town of Innsmouth began trading with a tribe on some faraway South Sea Island. Eventually, for very good reasons, some Innsmouthers began intermarrying with the people of that tribe. (They are actually merpeople who live other places, including just off shore, so it's not that geographically far fetched. The rest of the fetching is done by Weird Tales.) It is all so awful that, just as the 1928 election cycle begins (Al Smith versus Herbert Hoover!), Federal authorities move in, blow up the town, and put everyone in it in concentration camps. "Liberals" are upset for a while, but when they see the awful, degenerate products of the miscegenating marriages, they all agree that, in this case, concentration camps are just fine.

Technically, racism is bad and H. P. Lovecraft is bad. It's just that this is so ridiculous. Beyond ridiculous, to the point that you just want to cuddle poor H. P. and give him lend him a nonjudgemental ear while he talks about his issues. It's probably about his Mom. It's usually about Mom.

It is also, though, about hidden histories. Most people who read "Shadow" come away with a suspicion that H. P. really, really wanted to go live under the sea with the Deep Ones. I doubt that embracing his "South Sea" ancestors (assuming psychological projection here) would have done very much for his organic brain issues, but it could hardly have hurt.

Though then we might have lost what made H. P. Lovecraft special, that art he had of implying a long and deep and very, very scary history --"the Mythos," and I find it easier to imagine non-Euclidean, cyclopean architecture then a need to explain any further. It's an art that's made H. P. Lovecraft's ridiculous South Seas of sunken R'lyeh bite deeper into the modern consciousness than the original New Englander-touched-by-the-South-Seas, Herman Melville. Though that's not hard, because that dude was ridiculous, and you can't tell me differently.

It is also a little weird for me because I come from those South Seas. Well, not the real South Seas of palm trees waving over white beaches, etc.,

But an even more remote and distant destination: Winter Harbour. That's my theme today: South Seas connections and Winter Harbours. Hawaii was often used as a winter harbour for traders on the Northwest Coast, but this obscure little town was a winter harbour on the coast. I started this post with more ambitious ideas in mind (in particular, pursuing the carpenters who were the first Chinese migrants to the Northwest Coast), but I've researched enough, and written enough, for a single week, I think. 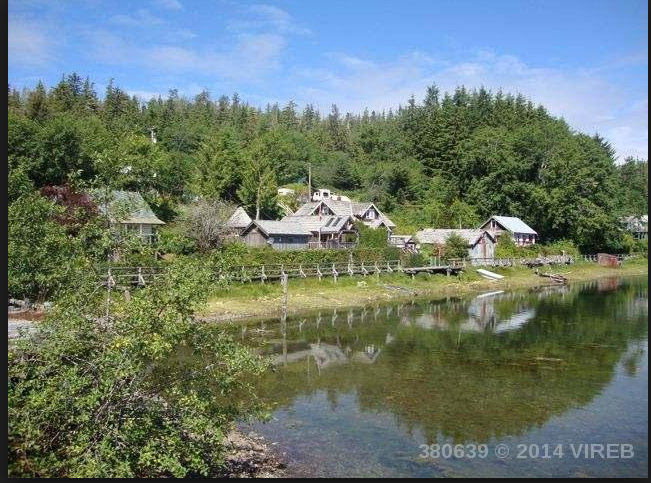 There's not really a lot to tell about it. The old survey noted the name "in the Nineteenth Century." It's a natural harbour at the northern tip of Vancouver Island, and at some point, presumably in the heyday of the Maritime Fur Trade, sealers and fur traders used to over winter there. It's quite possible that there were scenes of "unlimited debauchery," and that a few native wives sailed back to places like Innsmouth, although, overall, it's a great deal more likely that men like Queequeeg ended up marrying Innsmouth women. There's just a lot that we don't know, and more where people tend to get weird. I just learned yesterday that Vancouver found two Hawaiian women, one a "princess," held captive at Nootka/Youquot in 1793. It's an anecdote buried in his papers and presumably doled out in limited doses to feed overheated imaginations. Vancouver went on to point out that they were probably brought to the town by the rascally Captain H_B_, well-known for capturing natives under the pretext of trading with them. Sometimes he ransomed them; other times he carried them to his next port of call and sold them as slaves. Behind him, Captain H_. B_. left enraged locals who, in turn, captured trading vessels and enslaved their crews.

That's a lot of overheated imagination, right there. And true, too! Even the circumspect post journal of Fort Nisqually admits to occasional dealings in slaves, notably a marriage between two local notables in which the friends of bride and groom each contributed "8 guns, 10 mountain goat hides and a slave" to the new household.* The author of the Wiki article, already linked to, uses several ship's journals to establish that the Yankee ships on the Northwest Coast in the last days of the trade involved themselves in everything from mercenary service to slavery to make their profits. It's likely that all the sexy bits are trivial. Ethnologists collecting stories in Haida Gwaii in the 1930s were told stories of how Haida, Aleuts, "Kanaks and Hawaiians" were recruited to work on the sealers, and later the whalers in mixed-race crews. Labour was short, and slavery could only give way to wage and debt-service as a monetary economy took hold.

Of course, the sexy bits are important because they, unlike mixed-race crews of the floating proletariat of the Pacific, have their significance for family history, and that's where we started this. Faces are averted, stories not told. 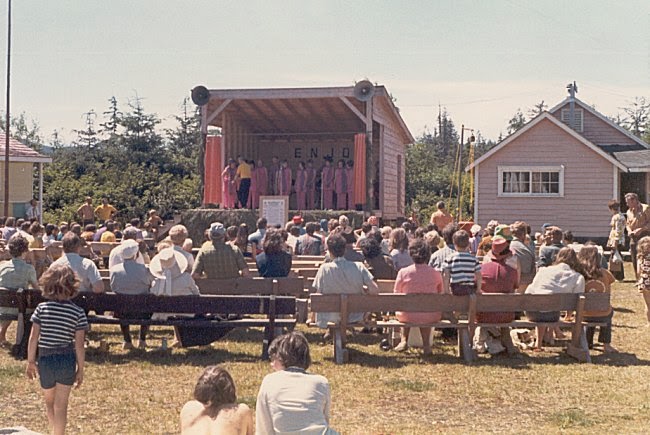 But they can be implied.

This is: i) the "first and only Winter Harbour Music Festival," in the summer of 1972; and by far the earliest Winter Harbour picture I could find on the Internet. There are certainly older pictures out there --Boas and Sapir were in the country in the 1920s and earlier, doing anthropology, but they're not going up on the Internet, allowing plenty of room to fill in our own Mythos.

The joke here is that everybody's faces are turned away from the camera. That is because, obviously, they're watching the act! They're not keeping any secrets, they're just a bunch of loggers from Holberg and fishers from Winter Harbour. Still, Winter Harbour's history is a secret. No-one has come forward with better pictures --of Winter Harbour, at least. (Holberg is another matter.) Probably a secret of neglect as much as of race-mixing shame, but a secret story, nonetheless.

Neglect, though, is the biggest part. The story of winter harbours usually goes like this:

Fort Vancouver is not a particularly good "winter harbour," since ships must pass the bar of the river, and because provisions are not particularly abundant. What it is, is the nucleus of a trading enterprise that is going to close the winter harbours over the next twenty years by out-competing the Maritime Fur Trade. It is the end of a bizarre stateless period of interaction between Europeans, Hawaiians, and Northwest First Nations on a more-or-less equal basis as they pursue, together, the first marine boom export business.  By its end, the mestizo aristocracy of the early "Oregon Country" is clearly in view. In 1841, 30 of the 33 male American citizens in the Oregon country, all to come into possession of the insanely large, 640 acre donation claims that Congress will mandate for people willing to migrate to the Oregon Country (just why is a question to be pursued another day), have "native wives."

This, of course, pertains to men resident in the country only. Carrying wives back to New England remains a matter of H. P. Lovecraft's imagination. Now, if I were writing this as fiction,"Martha, nee Atkins," would actually be "nee Maquinna," and there would have been some relief for her daughters in the form of a transfer of their land claim to Oregon --If Congress is willing to grant a square mile just for travelling across the Continent, satisfying this claim is certainly not unreasonable! But it is not like I've pursued the matter very far. . . Hawaiians in the old Northwest, it turns out, is more than enough for one blog post.

Probably a good point to end on.

*Told by the Pioneers: Reminiscences of Pioneer Life in Washington vol. 1 (Washington Pioneer Project): 60.  I am not even going to try to guess what a proper bibliographic citation of this would look like. It's not even entirely clear who wrote this, although from context it seems to have been Chief Trader Archibald McDonald.

**Because the old one's getting old.
Posted by Erik Lund at 2:41 PM

Email ThisBlogThis!Share to TwitterShare to FacebookShare to Pinterest
Labels: Blog Comment Follow-Up, Gathering the Bones, It's All About Me, Plantation of the Pacific, Port Alice