Too Late, No One Cares: Grexiting the Late Bronze Age: The Case for Not Everyone Dying in the Process

Again, it is worth pointing out a theory. (That theory is not, as you might suppose, that Erik is too lazy to work on "Techblogging May, 1945, II, today." I have very important reasons for putting that off to the end of the week. Important, I say!)

As late as the end of the first third of the Nineteenth Century, travellers to Greece were struck by the way that the lowland ports where they debarked their ships in search of the lost landmarks of Antiquity, Pausanias in hand, were tent cities. The "homes" of the Greek peasantry lay elsewhere, up high in the cool mountain heights.

There, for the most part, Pausanias did not go, and neither did the travellers. Mystras, near Sparta, was too famous to ignore, and the Acrocorinth was a good, stiff walk above that city. But as for the heights of Ithome or Ypati, the town travellers were prone to confuse with ancient Thebes, as Mystras was confused with Sparta.

The theory is that our Antiquity-centred view of Greece focusses on the coastal plains which are the most agriculturally productive under a regime of commercial agriculture focussing on the production of crops such as olives for export. What we are seeing in the Nineteenth Century is a resumption of that kind of agricultural economy in Greece under the stimulus of foreign demand, a "return to the plains."

Here's another take. Ruins, high politics, a past disowned. 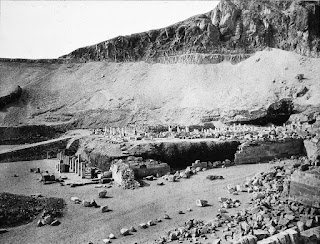 Time has not been kind to Nebhepetre Mentuhotep's House of a Million Years. (Though the modern reconstruction is spectacular.) The founder of the Middle Kingdom occupies an odd place in the history of Greece. If you believe Martin Bernal, he is the founder of a great Egyptian empire which colonises Greece. If you don't (and, frankly, you shouldn't), he is the founder of a great state that ought to have exerted a considerable influence on Greece. Hints that the Middle Kingdom did just that can then be heaped up into a mountain of inference that takes you back to Bernal and Black Athena.

But never mind that, because having given credit where credit is due, the issue with the mortuary complex at Deir-al-Bahani is not the distant days of 2000BC, but a tomb, carefully cut into the southern face of the cliffs near the ancient mortuary complex and subsequent additions. Here, some time shortly after 969BC, a priestly clan reburied the mummies of 40 pharoahs of the New Kingdom, removed from their original tombs. A little later, they added the mummies of 150 high priests. To hear them explain themselves, the descendents and followers of high priest Pinedjem I were doing the honly thing they could  to protect the treasures of the pharoahs from relentless tomb robbers. But careful examination of the unfinished tomb of Ramesses XI  reveals that the Pinedjemists used the site to process tomb furniture from these burials into more conveniently, shall we say, disposable, forms? It seems like a pretty disrespectful way to treat the pharaoh, but at the end of the period known as the Suppression, probably exactly as dark and sinister in fact as it sounds in retrospect, the victors were probably not long on respect for the late ruler.

It suffices to point out that most of the treasure buried in the tombs of Egypt for the eternal profit of the Two Lands was brought back into circulation about 950BC, and not by the tomb raiders who are conventionally blamed, but by the authorities who ostensibly fought them. The period of Egyptian history after c. 950BC gets little attention from Egyptologists. The country is ruled by Libyans and Kushites and even Assyrians and Persians and Greeks, and once you have foreigners in charge, the next step is miscegenation, followed by race mixing, followed by...

I'm sorry, I just got unaccountably aroused appalled by my chain of thought. Anyway, point is, this sort of stuff is bad and wrong and bad, so that even if all the archaeological evidence would seem to suggest a period of unprecedented prosperity, culminating with the Ptolemies, the most nearly world-hegeomic of all Egyptian regimes great power regime we can be sure that Egypt was, in some more  "in decline." Enough of Egypt! The torch has been passed, to the splendour that was Athens, the glory that was Sparta.  That's a Not-Safe-for-Mental-Health link there, by the way.

Only can we just, for a second, please not?

The story about the Spartan army carrying fetters in an invasion of Tegea to bind its inhabitants, only to be defeated and led away in their own fetters is colourful, and there's a certain ironic pleasure in the thought of those gigantic assholes being sold on the block by their captors. Except that I'm sure it didn't happen that way, that their kinfolk ransomed them. Slavery is for the little people, and I do not doubt that the ancient Tegeans were as complicit in it  as the Lakedaemonians.

Tegea, near Tripolitsa, did get a visit from Pausanias. He tells us of its great temple to Athena Alea,  site of Scopas' great frieze of the Calydonian Boar Hunt, and to its chthonic founder, Tegeates, son of Lycaon, father of werewolves. Tourists visit it, too. They have to, because Tripoli is plum on the road from Sparta to Argos --to anywhere in Greece besides Sparta, really. So up into the hills you go, and then down, and along the way, you can have a nice stopover and check out the grassy ruins of the temple, and have a nice glass of wine and lunch in a taverna. Don't forget to complain about being overcharged!

At the temple, and at an early date, French archaeologists discovered a votive pit over which the classical temple had been built. It contained "some Mycenaean and Sub-Mycenaean remains" in a late 10th Century context, the the more modern Norwegian School at Athens has determined. Three hundred-year-old antiquities were given to the goddess of the place, who was probably not named Athena this early. So were Laconian Dark Age and Argolid materials, hence the dating as post-Mycenaean. Also the implication, which needs to be spelled out, I think, that stuff was being brought up from the plains to north and south. 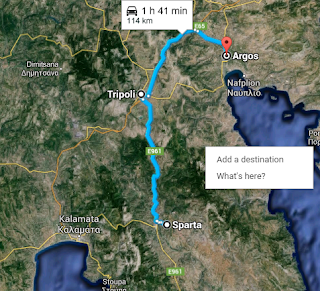 Sixty kilometers from Sparta to Tripoli, another 54 to Argos. Climbing 700 meters and down again  in 114 kilometers isn't quite a mountain climbing expedition, but you'd be feeling it in your calves! The nature of the votives, burned animal bones and open vessel votives suggests "drinking and dining rituals" to Yngve Thomassen Flognfeldt.

After perhaps two centuries of use, the votive pit was sealed in the mid-to-late 8th Century. A structure, recognisable by modern posthole archaeology (entertaining crazy person link) has established that an "archaic" temple was built on the site of wattle-and-daub, with a dirt floor. It is "archaic" in the sense of being ancient Greek, and "archaic" in the sense that wattle-and-daub seems to Eric Ostby to be deliberately archaisiing. Greeks, as we know, build in stone with tile roofs, so the decision to honour the goddess of the synoikising goddess of Tegea with this kind of structure must be deliberately archaising. The ancient Greeks of Arcadia know that their Neolithic ancestors built this way, so naturally they decide, being autochthonous in contradistinction to the Dorians who have invaded the lowlands, to honour their ancient past.

Much as I respect Ostby's work here, and appreciate his bold decision to put a draft of his paper up for everyone to see, this bit seems like reaching. Isn't it more plausible that this first sanctuary was built with the traditional materials? The next one, after all, was built with mud-bricks, wooden columns and only occasional stone. Either the goddess has reason to be a bit offended at the builders for going cheap, or, just possibly, they are limited by the materials and techniques at hand. (To pointlessly elide two groups of patrons centuries apart.)

The implications of this, just to spell it out --this is pretty much my point here-- is that post-Collapse, post the "acorn-eating" Late Bronze Age Greeks of Arcadia might have been building in perishable wattle-and-daub. (They are also, incidentally, speakers of the most Mycenaean-like dialect of ancient Greek. In traditional wise, this is presented as an argument for the survival of primitive vestiges in high places. James Scott, call your office, etc.) A recent Norwegian field survey in the Tegea area found stone structures of Mycenaean and medieval/early Modern construction, the kind of pattern elsewhere used to justify claims of a Late Bronze Age demographic collapse. But wattle-and-daub structures would not show up in such surveys. They do, however, require a more heavily wooded environment than existed later --or before.

Now, the earliest Tegeans had a votive pit, not a built structure here. There is, presumaby, a reason for this. Above all, it is down in a marshy area, probably at the boundary between adjacent hill tribes. Ostby qualifies it as the boudary between "useful" and "useless" land, but it would be odd if hill-living pastoralists did not make some use of the marsh hay. One does not build structures in flood plains --but that doesn't rule them out as cult centres.

So just to be clear here, we have a "Late Bronze Age" collapse, c. 1200--1150BC, a hiatus of discoverable cult activity through 1050, and then the resumption of it, notably at Tegea, in 1050--950. This does not necessarily mean a change in behaviour. the Tegean votive pit was found because we knew where to look --under the Temple of Athena of Alea. It does reflect a centuries-long continuity of site, a continuity which is lost in the medieval/early modern period, when the Arcadians of this region moved down the road to Tripoli/Tripolitsa.

So. The first step down the hill, back to engagement with the world system? Yes, surely. But, at least for now, I'm going to ask for a moratorium on assuming a "demographic crisis" in the Late Bronze Age Collapse. Cheap houses, built high in the hills, are a viable alternative.

And do give some thought to going out for Greek this week. I recommend the lamb.
Posted by Erik Lund at 4:48 PM