A Not Terribly Technical Appendix: Bats in the Belfry

There have been many crazy inventors, and many things to point at and laugh. But there has only been one "Bat bomb."

At this late date, it's probably not even vaguely possible to add something to the story of the Marine Corps (Yes, the Marine Corps. Who let them play with all that money?) $3 million plan to burn the "paper cities" of Japan to the ground with incendiary bats.

It turns out, however, that you can add something to the story of "Pennsylvania dentist Lytle S. Adams," Not surprisingly, the plan to set arsonist bats loose in nsuch belfries as Japan has,* originated with someone who --never mind, low-hanging fruit, to the point where you have to wonder if someone didn't authorise this just to make the joke.

My inspiration for posting on this comes from the left-hand side. That is, I was all-too aware of Adams from his incomprehensible ability to get funding, or at least attention, for his other crazy schemes before I realised that he was the Bat Bomb guy. Once I did, following up on him at The Atlantic piece which summarises the recent book on the Bat Bomb actually introduced me to aspects of his career of which I was unaware. Probably because they were late in life, and I am thinking of the fried chicken vending machine, here. This is a technology which apparently now works, although as a guy on the periphery of just this business, I could suggests some reasons why Dr. Adams' invention of the late Forties might not have been an entire success. I'm not going to do that, though, because there is more than enough material for this post in his patented (actually, multiple patents) method(s) for non-stop airmail pick-up

In the end, it doesn't matter that much. You don't actually need to know a famous politician to get a crackpot World War II scheme off the ground. Though if one were involved, I hope that he or she had to drive the Canol Road and fly the Airspeed Fleet Shadower.
So, kids. Now you know what a family road trip was like in the old days.

What really happened does not seem to have been a quixotic political intervention, but old money and sensitive politics, the two together not daring to say their name. Eleanor Roosevelt really was involved, but because her son had recently married into the du Point family. For it was du Ponts, chasing airmail contracts, who ultimately realised "air pickup" --to the extent that it ever actually was realised, which isn't much.

It's all seedy enough that one can well understand why a charming, if flaky inventor was brought aboard to run interference with the old Delaware family of Merchants of Death. Essentially, air mail contracts allowed air lines to claim their per-unit subsidies for flying an air route, while delivering the mail by rail. It was a thoroughly corrupt scheme that was great for the development of American commercial aviation, and from the du Ponts' point of view, a chance to get into this business of making money by flying over places was golden. The problem, which had already emerged, was that the contract required them to have at least a plan in place for picking up airmail in Appalachian mountain towns before the Post Office would let them just send trucks up for it.

Air pickup was that justification, and explains how the du Ponts came to own USA Airways. (Besides cooperating with Boeing in the 1920s, Adams was involved with Braniff in the early 1930s, so it is not as though the du Ponts invented this scam, or Adams as a catalyst.) In the end, once the du Ponts gained a conventional airline, Adams was bought off, driving off into the the sunset with a tin box full of du Pont payoff money in the trunk of his car and a scheme for winning World War II.

This was all five years after the Roosevelt Administration reran the notorious 1930 "Spoils Conference" which set the pattern of American aircraft manufacturer/airline ownership groups maintaining their profitability with guaranteed airmail subsidies. I've already linked to the 1934 "Airmail Scandal," but I did think I should probably point out its roots in a routes auction by the previous administration. Between air mail and commercial radio licenses, American business had a lot to remember, and thank, the Hoover Administration for, for many years.

That's what you'd call a digression, though. We could stand to know a great deal more about the intergenerational politics of commercial radio licenses, especially given the way that the American political media gets itself knot up every election year about the way that big media chains have just now started to hijack the political process. This is about air pick up gimmick, though. What about it? 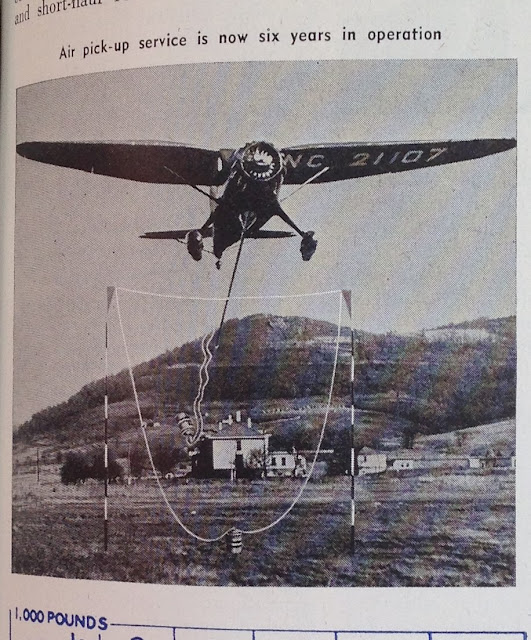 Adams' original invention was consideraby more elaborate than this farily self-evident set-up, lifted from the May 15 issue of Aero Digest. The interesting part here is that this is not obviously an  "invention."

You will have to wait until the 2:00 mark to see a prewar demonstration of "nonstop air mail pickup," but this was definitely a prewar thing, something Trimble gets right by pointing to 1924 Marine Corps experiments in Nicaragua. As far as I know, it actually goes back further than that, and by the mid-30s mail pickup was a standard set-piece in the annual RAF Hendon pageant. Trimble manfully suggests that there is "no evidence" that Adams was aware of this, just as there is no evidence that his much more elaborate 1920s apparatus was uncomfortably similar to World War experiments by the US Navy. The whole "oblivious inventor" defence might seem implausible to you or I, but it has stood up in court, so I guess it will also stand for historiography?

But the point is not the defensibility or otherwise of the Adams patents, but the fact that Richard S. du Pont bought them. There are differences of technique visible in this video, so perhaps the 1937 patent could have been defended in court, but they did not have to be. No-one was interested in contesting them, and they only came to view because of the way in which the Adams-du Pont relationship was ultimately dissolved. (Trunkful of small bills for Adams, passenger airline for the du Ponts, if you've that is. Say what you want about the tenets of patent trolling, at least it's an ethos. ) 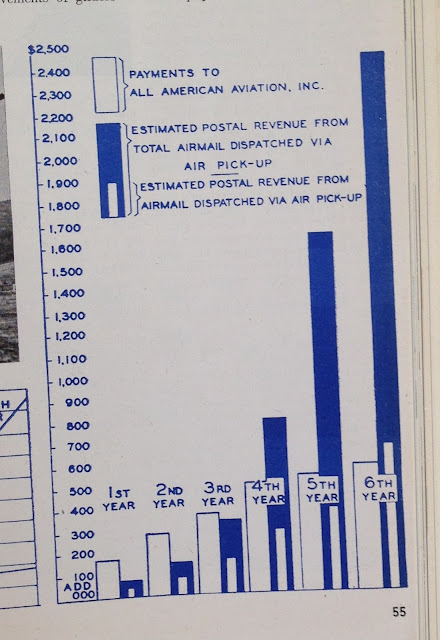 See the exponential curve of increasing All-American Airways revenues from air mail pick up?  It's nice of them to include the left-hand scale to put things in perspective. Hundreds and hundreds of dollars were made!

Unfortunately, it turns out that mail pick-up revenues didn't continue at an exponential rate of increase to infinity. Who could have seen that coming?

In his peroration, Trimble gives us pretty much the standard account of inventor versus institution. Adams wanted control of his invention and considered it in personal terms. Unable to compromise with All-American engineers, he was tragically excluded from the invention he pioneered, etc, etc. The alternate perspective, which is that he and the du Ponts both managed to get rich (well, he kind of rich, the du Ponts even richer) from a piece of hot garbage lifted from the Boy's Own aviation press is not considered.

I'm not going to argue with Trimble, though. Here's some classic 1940s advertising that probably illustrates, as well as it is possible to illustrate, how high tech manufacturing actually worked in the mid-war years.


If I made my point clearly enough, it is that I am in a myth-busting mood, inspired by the news of Alphabet and Zirtual over the weekend. (I didn't think the Zirtual thing could get worse until I read this Forbes review demandng that we stop judging a fine business model over little things like "stealing a week's pay from its employees," and "Only being financially viable under a slave labour model."

Heh. Slavery. It's sexy and trending.

Which brings me around to the last bit of old-timey advertising I've a mind to post today: 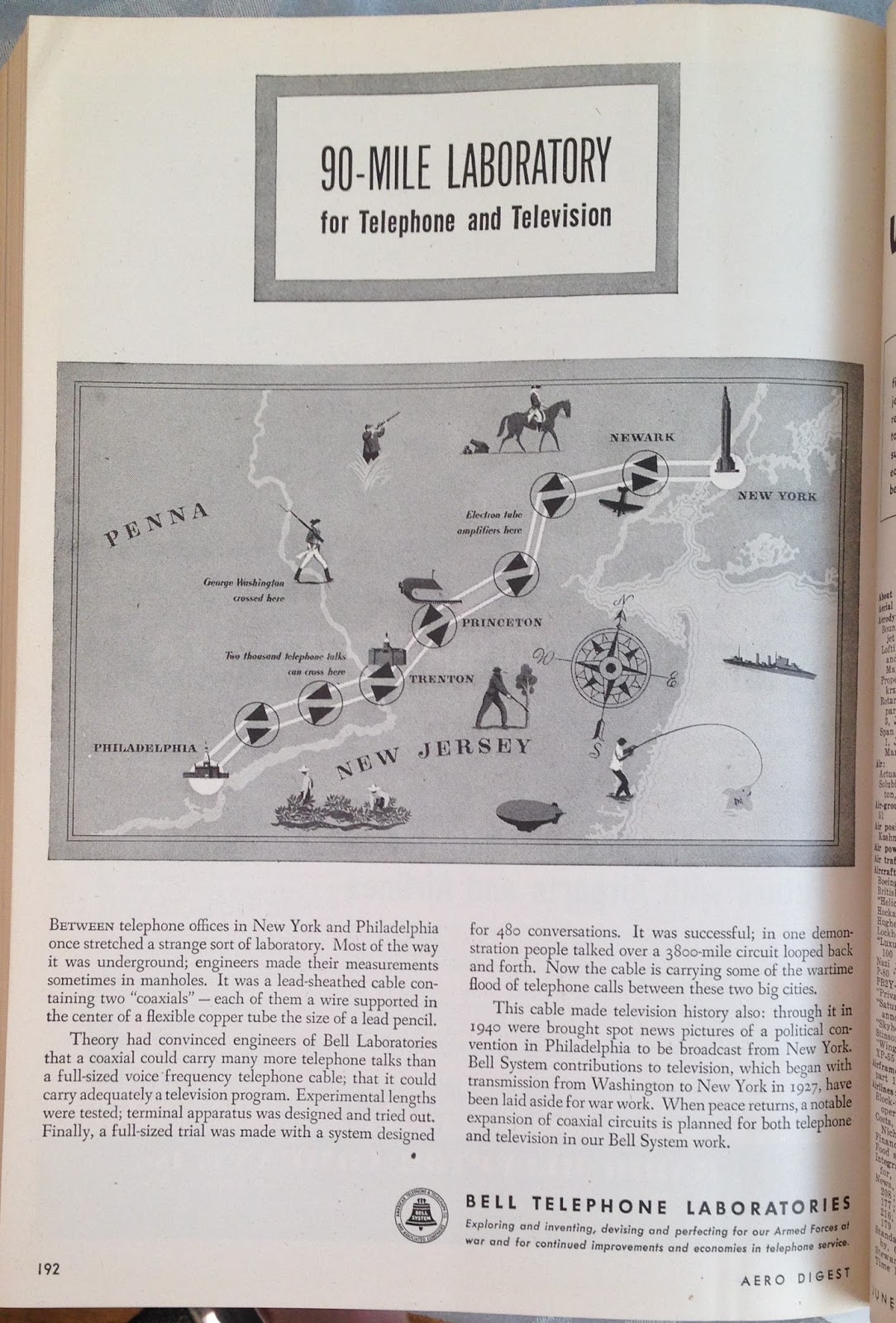 "Alphabet" is supposed to be Larry Page's way of showing the market that Google is, and always will be, the Bell Telephone Labs.  Now, while the last thing I want to do is discourage industrial investment, corporate investors might do well to ask Larry to what extent he understands what Bell Telephone Labs actually were. The Adams-US Airways story is a particularly naked way in which bad faith patent trolling served to justify monopoly profits, and we all know that Bell Telephone was a "natural monopoly." In fact, research facilities like Bell Labs are sometimes invoked as a justification for monopolies.

In this ad, Bell talks about a pioneering coaxial cable backbone "experiment" that carried a long-distance television broadcast in 1940. Indeed, if you read Brown's history of radar in World War II, you will learn that coaxial cable was an American invention (which it its, more on that in a moment). You will not learn, in this ad or in Brown, about "a fully engineered FDM coaxial route [that] was field trialled and opened for traffic in 1938 on the London – Birmingham route and extended to Manchester in 1940. The cable contained four coaxial cable tubes of 0.45 inch inner diameters. Two were used for telephony using a frequency band of 50–2100 kHz, with 4 kHz channel spacing and providing a total of 400 channels. The other two tubes were used for TV channels with a bandwidth of 1.6 MHz." [Keith Ward]. I smelled a rat here, by the way, because I've read that backbone being described in a prewar presidential address to the Institution of Electrical Engineers, published in the 1938 volume of Jour. Inst. Elec. Eng.

Of course, it's not a British invention, even if it was the "first in the world." (Germany, and, apparently, Australia have earlier claims to have not invented the coaxial cable.) That's because (Ward again) "The theory of transmission lines comprising a central conductor surrounded by an outer cylindrical conductor, both running along the same axis, e.g. a coaxial cable, had been studied by a number of Victorian scientists including Heaviside, Kelvin and Rayleigh. But the concept of its use as a bearer for long-distance FDM transmission systems was patented, in 1929, by Affel and Espenschied of the Bell Laboratories." Wikipedia updates this information by noting that Heaviside actually patented coaxial cable in 1880, followed by Siemens in Germany in 1884. Thanks to that bit of  recent research, national credits for the invention of coax now revert to Britain and Germany in the only forum that matters (Wikipedia).

We are, however, still left with Espenscheid and Afel (the former also the inventor of the radio altimeter, in 1924.)  Copying and improving the earlier Siemens patent proved sufficient to win fame and fortune for them, and ATT could then wait on British (and German and Australian) experiments to introduce its first "experimental" coaxial cable.  From here it looks as though the key to Bell Labs' success was much in Adams' spirit: being backward.

This is not to say that I'm not looking forward to Google's brand of fried-chicken-on-demand. I'm sure it will be way more delicious than Google Glass.

*I was brought up, and by "brought up" I mean had to discuss this inanity in a doctoral seminar, with the idea that while Western churches have bells which sound the hours, so that Westerners naturally become all mechanism-minded, because clockworks, Asians have, uhm, gongs or something, and also no sounding-the-hours, and so become all mystical and stuff. David Landes said it, so it must be true. Also, Max Weber. Anyone ever read the takedown of Weber in Mack Walker's The Salzburg Transaction?.
Posted by Erik Lund at 12:29 PM