Rain Follows the Plough: Harappa and the Cultural Defectiveness of Swarthy Foreigners

Edit: Just throwing in the whole crockpot: here's the link to the argument that a Bactrian king, Diodotus I,is the historical Ashoka. Pretty interesting from a linguistic point of view, since it raises the question of whether Sanskrit predates, or postdates the Hellenistic Prakrits.

Not exactly long on time this week, so I'm going to pull some old reading out of my --pants. It is, however, a bit of a response to various provocations. (Lameen sends me here, if you're interested.)


The joke here is that back in the late Nineteenth Century, a supposed "frontier of settlement" that delineated populated America from the "Old West" was passed by wheat farmers headed west. Supposedly, the improvements changes made by settlers would cause the micro-climate to become wetter. Rain would follow the plough, they said. Incorrectly, though there are other reasons for the abandonment of Kansas's numerous ghost towns. I could also make some strained point about the Middle East being dry, and the home of "Islamic extremists," and Kansas being dry, and the home of. . . But who would that be helping? The issue here is that we keep talking about culture (and language), where it wouldn't be unreasonable to start with rainfall.

A week ago, Brad Delong took us on a dive into the superb research of Islamic medievalist Eduardo Manzano, who asks just how medieval Islamic institutions became so different from "Western." The implication is that this is going to  matter for the divergence between "Western" and "Islamic" economies. Why are we European-descended, give or take, people so rich, while Middle Eastern-descended (look, let's just go with it, okay?) so poor? It's because of  Roman law something Benedictine monasticism something feudalism something private property. Or so I imagine the argument. The fun thing about this is that we have someone with a fingertip feel for Islamic history sketching an overly broad and schematic history of medieval Europe, with the ultimate outcome teleologically explaining the outcome of the assorted crisies, reformations, renaissances and revolutions of European history. Well, fine. Once we've excluded other possible factors, surely institutional history is a thing to look at, and Manzano is exquisitely sensitive to precisely the objections I've suggested here, and does his best to guard against it.

The question is whether we have, actually, excluded other factors.  Like rain. The Middle East is dry, or so I've heard. Not that this is going to be about the Middle East, Islam, and the Clash of Civilisations, because it is actually about something I've researched in the past, which is not that. It is Bench Grassish, though. Notice the new label!

East of the "Middle East," where Islam failed to thrive, lies the the Indian subcontinent, long since split from its Antarctic motherland, collides in slow motion with the Eurasian plate, producing the Himalayas, lies the Punjab, Land of the Five Rivers. (Maahi Ve, by Josh.) Much of the Punjab has been incorporated in the Muslim League's national home for Indian Muslims, Pakistan.

Before that, we are told, between about 2000BC and 1500BC, it was the home of something which we agree to call the Harappan Civilisation, after the archetype, an archaeological site fifteen kilometers west of Sahiwal, on the Lahore-Karachi Railway, on an abandoned bed of the Ravi River. Well-known to locals, who pointed it out to antiquarian Charles Masson, who described it in an 1842 book, Harappa was first excavated in 1925 by a team led by D. R. Sahni, commissioned by the Director-General of the Indian Archaeological Survey, Sir John Marshal. Subsequent digs, especially that led by British '50s television archaeologist, Mortimer Wheeler, have consolidated Harappa's reputation as one of the great Lost Civilisations of antiquity.

Qualifying the adjectives, the Harappan Civilisation is great because, apparently, it had a lost language, written in an undeciphered script. (Whether there's anything in it about the the Hiss case, we may never know.) It is lost, because, Mortimer Wheeler says, because Indo-Aryan, Veda-reciting, chariot-riding, bronze-axe wielding warriors of the north descended on them and destroyed the mud-brick citadels.

Later intepretations favour climate change or systems collapse or what-have-you, and absolve the Aryans on grounds of chronology, because the collapse actually happened about 1900, and everyone knows that the Aryans arrived at the stroke of 1500BC. Just count the generations back from the Trojan War. Uhm, science. Specifically, historical linguistics.  If you are not moved to follow links, pioneering German Indologist, Max Mueller, argued that since the Buddha lived c. 550BC,* and the Vedanga and and Sutra Vedas are in dialogue with him, they must be the latest of the Vedic writings. The chain of listed Brahmanic teachers of these Vedas takes us back to 800BC. The Samhitas, which are before these, must have been composed over, oh, say, 200 years (1000BC). The Vedic hymns were composed over about 200 years. (1200BC), a date confirmed by the date of the Trojan War archaeology's first good date for chariots down in these parts.

Fine, fine, whatever. I'm not going to be the iconoclast here. As Terence D'Altroy points out, we probably would not infer the existence of Tawatinsuyu from the archaeology of Chile, Bolivia, Peru and Ecuador, either. Having already used that excuse to suggest that the Uruk Expansion really might have been an empire, I am not going to exclude the idea of a vast, Indus Valley Civilisation/Empire, just because its existence would make modern Hindu nationalists very happy. As for kicking Veda-chanting, Indo-Aryan warriors out of the picture, at least since we realised that Conan the Barbarian isn't real, we haven't been big on the idea that barbarians burn down cities without replacing them, if at all possible. (In other words, our barbarian invaders have to be subordinated to a "systems collapse" model.)

Every July, as the land warms across the world continent, great columns of air rise from the ground, from the Thar to Siberia. Winds blast across the empty plains of Dzhungharia and out through the Gates. To replace that air comes moisture-laden ocean winds. For three long months, India and Pakistan are drenched.  As September ends, the winds change direction, and, at least in the Punja, a dry season follows wet.Not surprisingly, the transition between dry winter and a wet summer makes for a study in vegetational contrasts. Winter is a time of firm soil, dust, and tame rivers, a time for travel, and for planting the rabi crops, winter-sown, spring harvested. The rabi crops include barley, mustard, sesame, lentils, and, above all, winter wheat. These are the "founder crops" of the original Agricultural Revolution. Neither is the Punjabi peasant idle in summer, either, when the rivers become inland seas, and travel is all but impossible. This is the time of the kharif crops: rice, pearl millet, corn, black and green gram, cotton and perhaps more sesame.

True to the conservative nature of the peasant farmer, the preferred plantings of the uncertain kharif are cash crops. As elsewhere in the world, rice will be part of the main dish at a restaurant, naan bread served on the side. to make up the bulk and staff of life when the commercial rice crop fails. Rain, after all, makes the grass grow, and cows are a lot more amenable to untimely rains than crops. (Also, who actually eats pearl millet except poor people, chickens and cows, anyway? They've even stopped making cous-cous out of it!)

So. Anyway. Guess when the kharif crop cycle first becomes evident in the subcontinent's agricultural record? 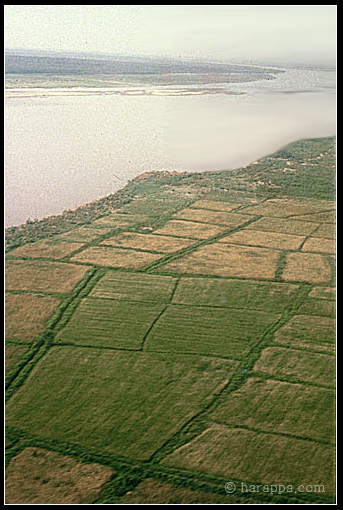 Jonathan Mark Kenoyer, who hosts this picture at his excellent harappa.com website, and is probably the owner of the copyright on the picture (AARH IM A PIRATE) captions it "rice fields almost ready for the fall (kharif) harvest stretch down to the Indus River near Mohenjo-daro. Mohenjo-daro, well downstream of Harappa on the Indus, and perhaps once squeezed between that river and a branch of the Ghaggar-Hakra River, is the other Indus Valley Civilisation city that everyone's heard of. While there are plenty more Indus sites, hardly anyone cares, because they're boring, just mud-brick buildings and more Mesopotamian sealings and bronze work to date them. The same set of enigmatic Indus inscriptions keep turning up there, but, thanks very much, we've got enough already. (New ones just bog down decipherment efforts.)

The archaeological site of Mohenjo-daro is on a Pleistocene ridge that can easily stand island in the Indus flood. It is under repeated assault by the river, which has very nearly reduced it to an archipelago, and the nearby village of "modern Harappa" is often reachable only by boat in summer. Unlike Harappa, the site was not known to locals --to a point. An early Buddhist stupa sits on its highest point, inspiring the fairly logical suspicion that an even older temple lies beneath. Unfortunately, and in spite of considerable plotting by Wheeler, the stupa still stands, protected by the Scheduled Monuments Act, an old Raj-era enactment allowing the police to break heads at the regular mosque-and-temple-dismantling parties that are such a charming feature of sub-continental politics. Although Buddhist sacred spaces don't come in for the same attention, the fact remains that still so does the stupa, and the archaeologists have had to dig around it.

They have done so, to the extent that the water table lets them, because this is what modern Harappa looks like from a satellite: 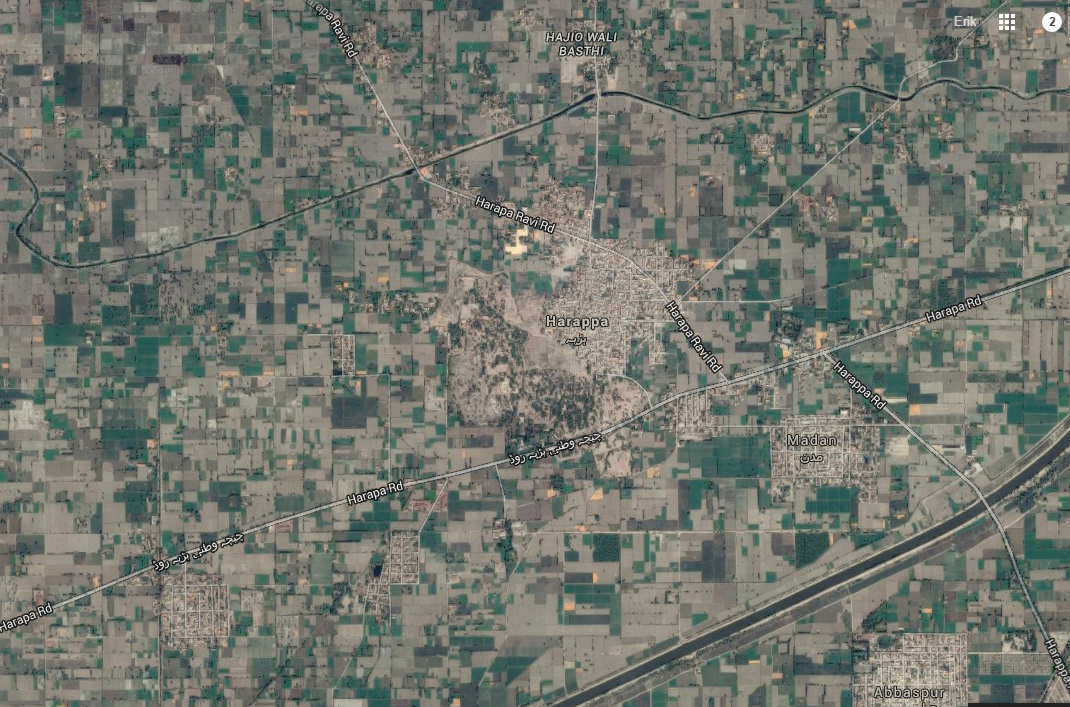 ,
Grow rice, grow archaeologists. I suspect that it's all one for the average Punjabi farmer, as long as the rupees roll in. Harappa isn't just a big, ancient city (perhaps 200 hectares in maximum extent). It's a big, ancient city that no-one has built over in modern times. The local urban types live in a city called Chhatto Wahan, which I 've never heard of, and neither as English Wikipedia. Pakistan is a fairly populous place, however, and it's got a lot of cities that I've never heard of --the point, insofar as I have one, being that if you want to live in a city near Mohenjo-daro, current evidence suggests that you'd be much better off building at Chhato Wahhan.

Why? Because it's drier! Mohenjo-daro is a dumb place for a city. Were Indus people dumb? Is that why their civilisation fell? Or is our paradigm defined by what's been made available for excavation? It's a lot cheaper to dig in rice fields than under this nice mosque!

*Note that this is the Pali long count, hence a heretical Theravadan teaching. Everyone knows that the Guatama Buddha taught a hundred years before Ashoka, ie. about 350BC. (Follow this link for your Ashoka-themed, tinfoil-hat related needs, although it's a pretty tame version of the "Ashoka was actually Demetrius I of Bactria11!!") So I guess the Harappan Civilisation fell around 1300BC.
Posted by Erik Lund at 1:07 PM