In Silliness, Truth: A Snooperscoping Appendix to August 1946, II

August is the "silly season." Congress, and everyone else, is on vacation (some people will go on road trips in the Canadian Rockies).

Pity the not-so senior staff at Time. They're putting together the beach-read number of the paper. It's going to be Time or Forever Amber. (Okay, it's going to be Forever Amber. But still.) How do you produce a can't-put-it-down number of a newsmagazine without a single high-placed source to tell you how awful Harry Truman or Harold Laski is? The answer is that you run all the "man bites dog" stories.

Well, here's the odd thing. The "man bites dog" stories of August 1946 turn out to be a lot more interesting than the politics of 1946. Maybe that's because I already know who won in 1946, 1948, and 1950. Maybe it's because that stuff just isn't that important in the long run. Well, to be sure, in the long run, the proto-UFO story from Sweden isn't that significant, and the fact that Bing Crosby is being sponsored by the company that will soon produce the first consumer (and computing) transistor products to be placed on the American market is mainly interesting to me. On the other hand, you have Joe McCarthy running for the Senate,  polio, and the bikini.


Louis Reard's original bikini, per Wikipedia, was first shown in Paris on 5 July 1946. But, just as Linda Christian isn't wearing a "bikini," neither was Reard's design a "bikini," either. He dubbed it the Atome, and advertised it as the "smallest bathing suit in the world." This sounds like a pretty soiund description, given that the design was "a bathing suit made of four triangles cut from 30 square inches." 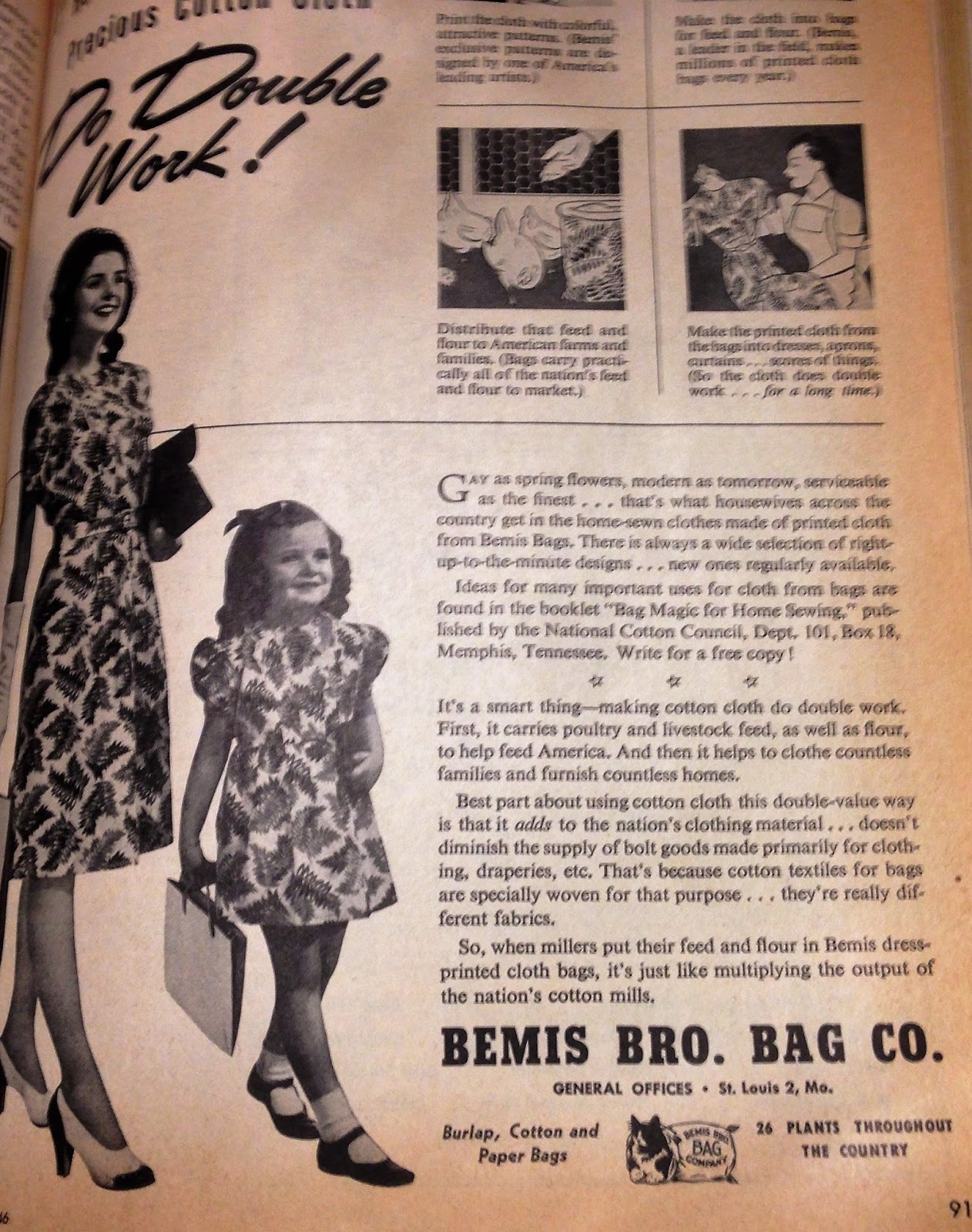 People aren't just going naked in public because they're naturalists. They're going naked because there's not enough cloth around. The world isn't growing enough stuff.

You see this jumped-up busboy? The French are willing to pretend to give him what he wants just to get Cochin China's rice exports going again. Siam, Burma, Annam and Cochin China are the rice bowls of Asia. Peace, from Korea to Bengal, depends on getting the paddies operating again. After that . . . we shall see.

Ho Chi Minh is a Communist, of course. They're everywhere. Louis' notion of calling his new bathing suit an "Atome" has an obvious logic, since it is small, like an atom. But at some point very soon, a much more relevant and more colourful name is going to be found for it: the bikini bathing suit is a

I'm cheating here, a bit, since you've already seen this image. The publicity given to the Operation Crossroads nuclear tests at the Paris Foreign Minister's Conference would seem to call for some kind of answer from those dastardly Communists, some way of saying that they weren't just going to sit back and be intimidated by the capitalist Bomb. Just why that answer would take the form of secret rocket tests over Sweden is another question entirely. This seems to be a continuation of the pre-war phenomena of "Airship Scares," which is in  my Internet buddy, Brett Holman's wheelhouse, so I will link to his site, and move on --after pointing out that I occasionally comment on his posts to the effect that a lot of what is going on with UFO scares is hypnogogic projection. People "see" their dreams in the night sky.

Two years from now, the unexplained lights in the skies are going to be aliens, not communists. So I'm saying that's what's in the subconscious of the Fifties? I  guess. People have done an enormous amount about UFOs and the Cold War without really grappling with the fact that there were numerous pre-UFO "scares" in which witnesses had no compunction whatsoever in pointing the finger at geopolitical enemies. No aliens needed in the 1890s or the 1930s!

That's because the real answer to the atom bomb turns out to be a bathing suit. Make love, not war, to coin a phrase.

I've had to make this point elliptically to maintain the framing device (I cannot see a 26 year old woman, writing in 1946, talking about this stuff explicitly with her father-in-law), but there's a great deal of sex in the August numbers of Time and Newsweek. (and blood, too.) That's because postwar, magazine circulation is in a bit of a nosedive. People have more to do now that the war is over. A very minor story this August is Press Wireless losing an arbitration hearing over its right to lay off one-third of its New York operataing staff. As often in these cases, the union's victory was rendered moot when Press Wireless declared bankruptcy a year later, emerging to carry on through to 1965, when it was acquired by IT&T.

A short history of Press Wireless is online here, and it is fascinating. Founded in 1920 as a joint-stock subsidiary of a number of American newspaper chains to operate a dedicated Halifax-London radio link, thereby bypassing the "big communication companies," it subsequently developed into a worldwide network of radio links dedicated to sending text, "radio pictures," and even facsimile reproductions of texts in character-based writing systems. From early on, it imported equipment and vacuum tubes "to evade American patent restrictions," and subsequently developed its own manufacturing operation, which was running at full bore in 1945. The sudden bankruptcy of this large, diversified and solidly-backed company must have been a bit surprising, and testifies to just how abrupt and savage the reorganisation in traditional print media was in the late '40s. Evidently, people didn't just have less time to read. They had a lot less time to read. 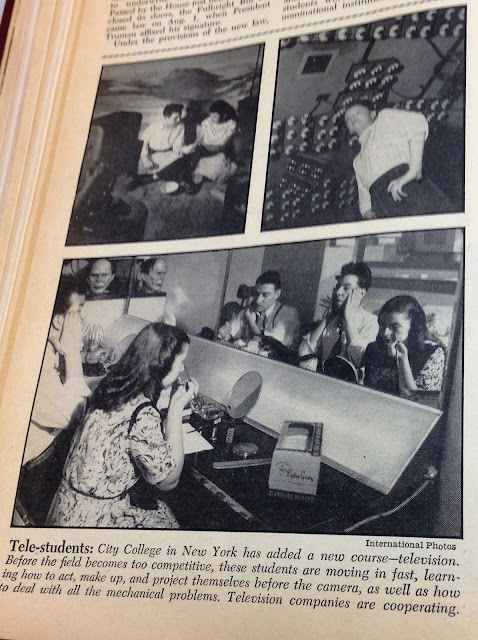 . . . Although there's other factors at play here. Also, given that PreWi began operating a repeating station in Tangiers at the explicit invitation of the U.S. Army "to handle press and government traffic with Europe," I can't believe that there's not more to this story than has been told in declassified venues. Somewhere, deep in the weirdness of the 1950s, there is surely at least one CIA intellectual who is convinced that Chinese characters are "ideographs," and bewitching himself into mad theories about characters, codes, cyphers, cybernetics and LSD. Or there should be. Someone's listening!

If political paranoia is a theme in August of 1946, in America, it also has a name: 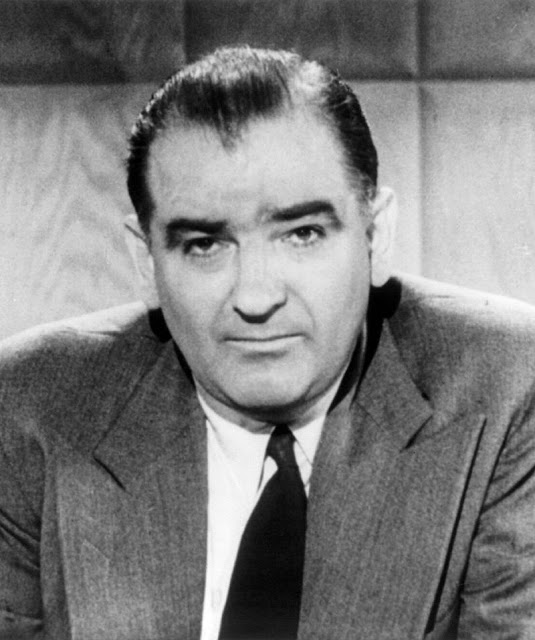 This is Joseph McCarthy, junior Senator of the state of Wisconsin, as we're a little more accustomed to seeing him than the youthful "Irishman" who appeared on the nation's newstands in August of 1946. That Joe was already willing to be reckless with the truth, but he didn't jump on the anti-communist bandwagon until a February 9, 1950 speech, given at Wheeling, Virginia. the Wheeling speech is embarrasingly familiar to me from having read William F. Buckley's McCarthy and His Enemies, in my youth, and having spent far more effort rationalising his account to give Buckley the benefit of the doubt. Let's face it: McCarthy got drunk, riffed on the Lee Report, and then decided to try and ride the tiger, probably mainly because he never managed to think of a way of dismounting that would preserve his political career. The fact that it ruined a lot of lives was fairly secondary to the man, which probably tells you as much about Tailgunner Joe (and, sigh, Bill Buckley) as you need to know.

But why? Well, maybe it's all projection. First, there's the rumours about the Senator's homosexuality, published in the Las Vegas Sun, indignantly denied in the Wikipedia article, sometimes assumed to be the cause of McCarthy's notorious fist fight with Drew Pearson. Looking back at the preposterous Army Hearings from the perspective of McCarthy's hospital bed, it's as good an explanation as (almost) any. Of course, it's also a bit beyond the pale. As recklessly and indecently cruel as McCarthy could be, he did not lean that heavily into the "Lavender Scare." And, heck, there might even be more. But if McCarthy was projecting when he denounced secret Communists in the U.S. Government, he had accumulated more than enough dirty secrets of his own without dragging in his sexuality or the possibility of an ancestor who "jumped the fence."

Pearson's deadliest, on the record insult, was the allegation that McCarthy was having "tax troubles" back in Wisconsin. We now know that MCarthy was censured for destroying his records as a judge, and he seems to have falsified significant parts of his service record, and then there's his "list of 205 communists in the State Department," which set the whole "McCarthyism" thing off. McCarthy was keeping lots of secrets.

I wouldn't lean into the McCarthy story at such length were it not for the fact that Father Divine revealed his second marriage in August of 1946; and that this is also the month in which All the King's Men was published. Father Divine, Joe McCarthy, and Huey Long. All we're missing now is Father Coughlin and Charles Lindbergh! And since we've got a gormless Lockheed plane at the plate, it's kind of like having Lindbergh around.

If I'm going to pull this back to technology, I want to talk about the strangely occluded boundaries of public and private in American life. "Conservative," "Liberal," or just plain religious, what makes figures like Divine and McCarthy so fascinating is their willingness to charge back and forth over the lintel, to take what is domestic, and make it public; and, perhaps, to take what ought to be public  and make it private. 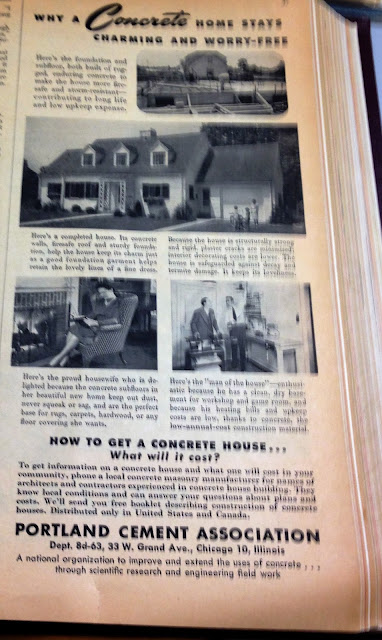 Domesticity is a big thing in 1946. For families sharing small apartments, it is aspirational, and with the housing shortage, there's a lot of aspiration going on. I thought that I had more than one ad for home furnaces in my current set, but it turns out that I was mis-remembering this hopeful advertisement for concrete homes. The point, as I was going to develop it, was that forced-air central heating is one of those "new" technologies that we don't really think of as having a particular moment in history. But it did! The day of shoveling out the clinker and pumping in the oil is rapidly coming to an end. People will be cozy in a way that they have never been before (unless they're dumb enough to buy a concrete house).

Then I was going to riff on the first signs of that other signifier of the 1950s, the "iron lung." But I don't have any photos of that. Besides, the polio story is going to get bigger for the next few years, and it's time to put this to bed. Iron lungs? Hermetically sealed environments? House --and spaceship. Public and private. . .
Posted by Erik Lund at 8:22 PM