No Other Eye: A Recovering From the Flu Extra 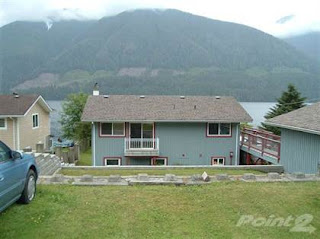 1040 Marine Drive is one of "30 homes listed for sale in Port Alice [British Columbia]" at this website.

If it seems a little charmless, it's probably in this visual field:

The front of the house looks so bare because there's not much gardening being done. Port Alice is, or was, a beautifully leafy town, but with the population that has fallen by half since I left to go to university in 1982, there's no-one there to do the work.

So, yes, I thought I'd share my recovery of personal continence by talking about holography, and, specifically, Sean Johnston's "The Parallax View: The Military Origins of Holography," currently up on Academia. edu.


Holograms, as Johnson points out, are images recreated by projecting an illuminating beam on the interference pattern created on a storage medium by a coherent beam previously used to illuminate an object. I'm being a little vague here, because the holograms everyone is familiar with are visual light phenomena created by illuminating objects with lasers; but the technology originates with the x-ray crystallographers, notably Mieczysław Wolfke and the William Lawrence Bragg, the British scientific one percenter distinguished academic who just coincidentally happened to be the son of a Nobelist. Bragg's main activity, x-raying metal structures to achieve pioneering levels of engine efficiency, aircraft lightness, and, eventually, nuclear explosiveness, was in turn an entre into a wartime scientific mandarin.  The maths and practice of creating a full, three-dimensional image of an x-ray object, complete with parallax, have an obvious relevance to the problem of finding crystalline flaws in large, artificially aged, extrusions of exotic aluminum alloys.

So, holography is big, and has interesting, but classified implications. This was a problem for  emigre Hungarian physicist, Denis Gabor, not cleared for classified work, but employed at British Thomson-Houston in WWII, and eager for a research project that would keep him out of Signals Branch at the tending-a-radar-station-in-Singapore level:  The answer was: BTH was working on an electron microscope. So he applied holographic practices, and created something nice, and then.. . . something something Pink Floyd.

Johnson points out that something happened in the gap. It turns out that there was another big application of imaging by coherent beams of electromagnetic radiaton during the war years, something called "radar." I know, I know, I was surprised, too. With Gabor set for life and inclined to wander the sunny scientific uplands of futuristic punditry, hand-in-hand with Norbert Wiener, it was left to an American group led by Emmett Leith and, later, Juris Upatnieks to develop something called "synthetic aperture radar" at the Willow Run Laboratory of the University of Michigan.

Johnson's point is that the high Cold War synthetic aperture radar research at Willow Run Laboratory constitutes the crucial missing link between pioneering work on x-ray holograms and the explosion of optical curiosities after the invention of the laser. Beyond that, however, it is an inquiry into a lost research community. The other significance of "The Parallax View" is that it was a 1974 political thriller. Student political activism led UM to divest itself of Willow Run Laboratory in 1972.

While it is probably the scaling-back of Air Force research support that led to the curtailment of this growing research-industrial complex in the American industrial heartland rather than the activities of Tom Hayden and the Students for a Democratic Society, it is interesting that the goals of student activism converged so neatly with the state's desire to retreat from direct research support in favour of "public-private" initiaitves. And that this happened at a great Mid-Western university at just the very moment that the educational-industrial complex began to metastatise to its current, economy-threatening size is just icing on the cake. Willow Run may not be what it was, but Michigan U hardly misses it! A Marxist would say, "It is no coincidence. . "

Actually, though, it is not a Marxist saying that in my mind's eye, but rather my master's supervisor, Stephen Straker, who had a little something to say about parallax in his only published piece, "a n Eye Made Other."

That "only" may look like a criticism. I don't know, I wasn't privy to the innermost details of his life. Steve was a great educator. He loved the Raincoast. His vision deeply informs the Arts One programme that has educated all of my nephews and neices, so far. He never got his History of Science Programme at  UBC, but, given the way that the world is retreating from boutique humanties programmes, that's not necessarily a bad thing. I mean, who needs good history of science, anyway? It's not like mistaken understandings of how technology works risk misinforming public policy, or anything.

What I am coming back to, in the moment of clarity, awake, well-rested, comfortable, in bed this morning, is a conversation, oh so very long ago, about the new English teacher hired by Seaview Junior Secondary School for my Grade 8 year. A. had said to me, a week before, that she thought that the new teacher was . . peculiar, and might threaten our education. I thought that she was strange, too, and I liked A., so I agreed. That next week, she reported that the teacher had been let go.

"She cried," A. said, a gleam in her eye. In that moment, I realised that I had done a bad thing. I had no idea how bad, then. Now, I suspect that my word was decisive. I was the boy with promise, after all. Whereas A.'s mother stood to benefit by reaping substitute teaching gigs. (Thinking about it, I begin to understand why my principal blew up at me when I clashed with my Socials teacher a few months later.)

So, we lost a teacher. A few years later, we lost the principal. The schools of Port Alice are closed now, and the few stable, long-term teachers they attracted, have long since retired. Some may still live in the community, but most do not. Why stick around? The town is not, will not die. A speciality cellulose pulp mill with its own stranded water power, in an ideal location, is a good idea. It may never operate again, but people have proven willing to stick around waiting, in case it does, for a lot longer than some more critical nodes of our fraying global economy proved willing to sit and be quiet. The pulp mill at Port Alice got its start making rayon for artificial silk, and nitrocellulose for explosives. The rayon business may not be able to find its feet, but I'm more bullish on ordnance than I've been for a while.

So add the privatisation of the Willow Run Laboratories (and our continuing failure to create a practical holographic computer memory storage system) to the TSR2, the Rotodyne, the Concorde, to the retreat from the Raincoast. Something went wrong in the 1960s, and in this installment, we find Tom Hayden and Ronald Reagan on the same side. It is no conicidence, indeed. . .
Posted by Erik Lund at 10:24 AM