Looking Back at the Siege of Britain, I:Small Boats, Small Ports, Small Coals

This post should be "Postblogging Technology, April 1947, I;" but my rotation off night shift was marked by a spell of 11 days working out of 13 (some of them in particularly grueling duties), and I was not feeling the motivation over my last two days off. Arguably, I should have just shook it off

Maybe this will help. Although a weekend in might help more.
but that's not how fatigue works. On the other, hand, I did do some things with my weekend, and while I am perhaps reading too much into my random consumption of popular culture.

World War II's longest and most grinding campaign was Grand Admirals Raeder and Doenitz's attempt to choke off the domestic economy of the United Kingdom by the somewhat indirect expedient of stopping the rest of the (free) world, and, ultimately, they were defeated by the world's middle managers, at a terrific cost paid, above all, by the people of Bengal. HMS Bronington, meanwhile, turns out to have a bit of history, having been the WWII-era minesweeper chosen as the Prince of Wales' command in 1976.  While the flaws of Prince Charles' character do not strike me as falling along the axis of irresponsibility, I can think of other leaders and potential leaders of the Free World who might have benefited from a youthful spell in command of a fishing troller.

this is not entirely correct. At the outbreak of the war, there were between 17 and 20 million deadweight tons of shipping registered under the flags of the British Empire, depending on size cutoffs and one's handling of ships taken up from trade. There were another 8 million tons under the flags of continental allies. War planning allowed for the construction of 250,000 DWT per quarter in British yards, while Canada produced 3.5 million tons, mostly of the Liberty type. (I assume that Down Under shipbuilders were kept occupied by barbies and strenuous efforts to Keep Australia White.)

While German submarine sinkings greatly exceeded British Empire production, they had far from erased the net gain from the transfer of the Dutch and Norwegian fleets by the time that  American building began to make its influence felt. After that, the German war effort only checked the rate of increase of the Allied shipping fleet. (Though this picture would change dramatically after the coming of peace allowed for the laying up of uneconomical and dilapidated vessels, you cannot win the war after you have already lost it. Unless that's what's happening now.)

One can fairly argue for a crisis of the battle in the winter of 1943; but it was a transient crisis. The Bengal Famine "began" in the spring of 1943, hard on the heels of the crisis of the Battle, to be sure, but after, nonetheless. The relationship here is highly indirect, but there is no doubt that a lack of shipping played its part in the Famine --only it was a shortfall of shipping that began after the vector of the global shipping total turned resolutely in an upwards direction.

Or should we be talking about shipping at all? In pre-war planning, the focus was on ports rather than ships. It was calculated that, in peacetime, the United Kingdom received 55 million tons of imports annually, and that with the east coast ports closed, the maximum total that could be imported annually was 41 million tons. (My source, here and for much of what follows, is Betty Behren's official history, Merchant Shipping and the Demands of War (London: HMSO, 1955). 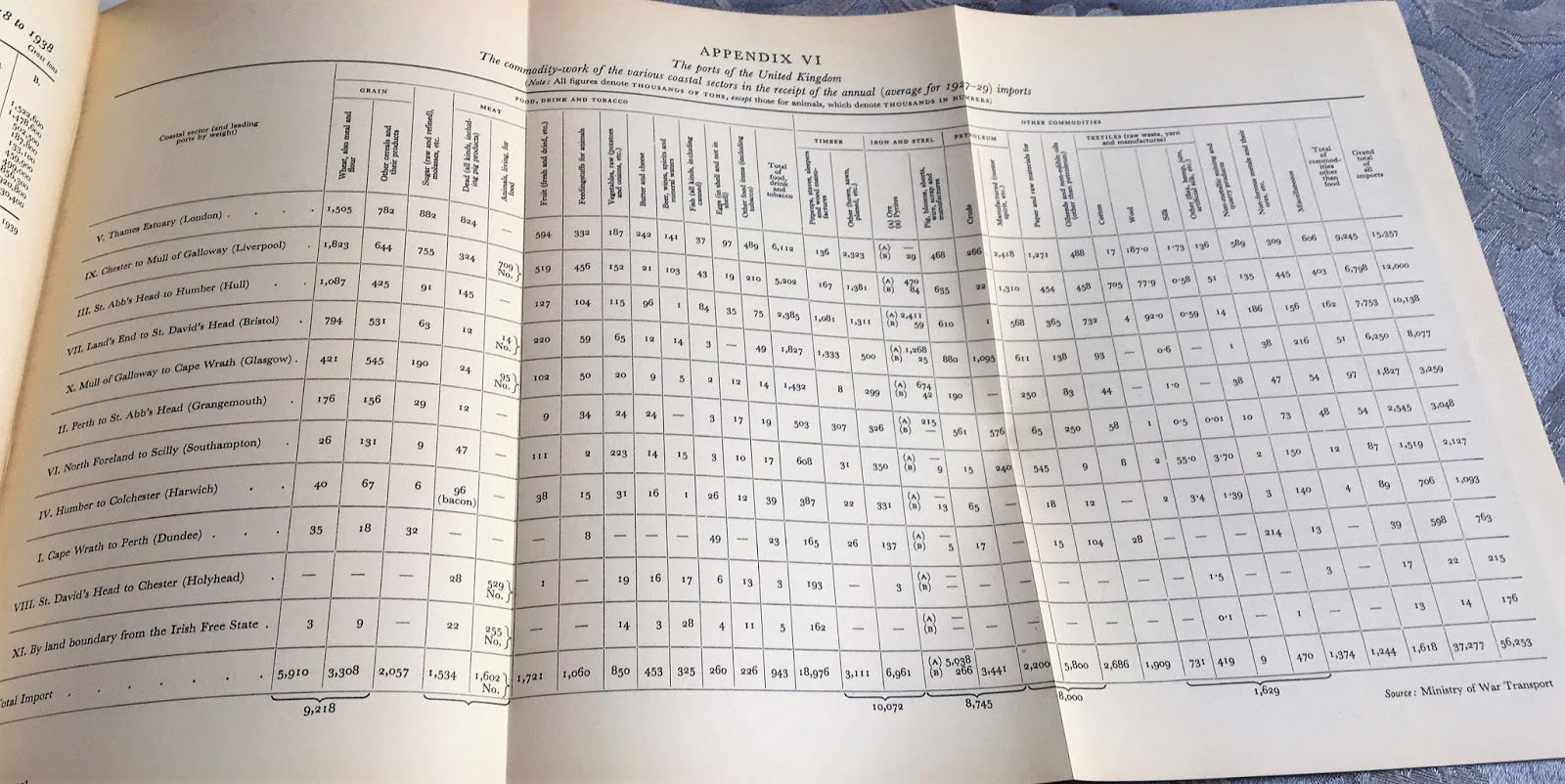 The west coast ports did their best: 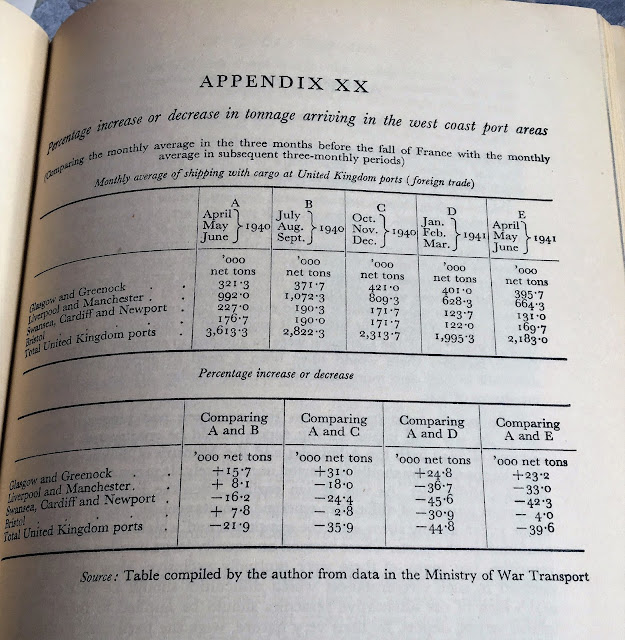 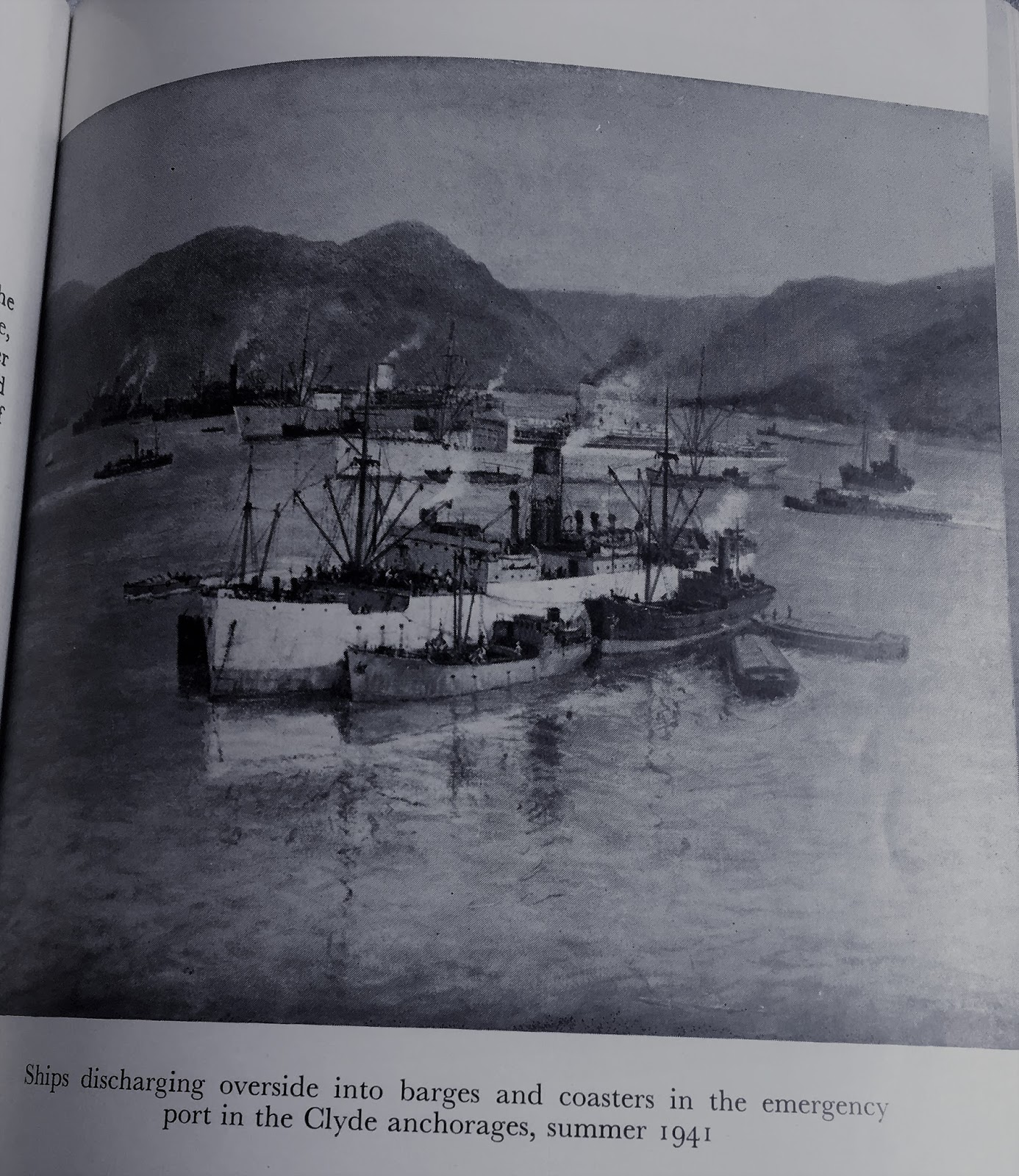 The picture doesn't quite capture the flavour of things, so I will quote a story from Behrens, admittedly from Murmansk and not Clydeside, of a ship immobilised for six weeks as a 35 ton crane was used to lift a 68 ton piece of machinery out of its hold by alternating lifting it by one corner after another, slipping some lumber underneath. Ultimately, sixty railcar loads of lumber were used. People are working very, very hard, and also very inefficiently, to keep these unsuitable ports in operation.

The crisis came in 1944, and was distinctly less funny: 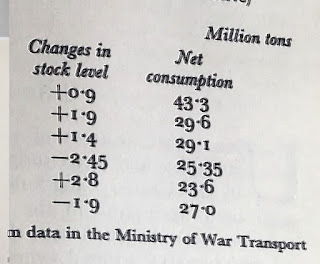 I've already talked about the causes of the crisis, which had a great deal to do with the campaign in Europe.
It's not so much the diversions of the 550,000GRT of the coaster fleet to unloading at France that's the issue. That bit of business isn't even terribly obscure, thanks to John Masefield. It's the terrible, systemic disruption of the entirety of the British internal communications systems by the logistic burden of supporting the war effort --again, I have talked about the lack of covered storage here before-- and a general paralysis of worldwide chains of communication, due to delays offloading all over the world.

The German Grand Admirals might not have envisioned Liberty ships idling in the roads of Ironbottom Sound, but they had a fair idea of what they were trying to accomplish, and knew that mines and air attacks on ports would play their roles in the Great Siege.

They also knew that the main remedy to this would not be dashing destroyers equipped with high tech antisubmarine detectors and weapons, but rather hundreds and hundreds of fishing trawlers converted for minesweeping and even antisubmarine convoy duties, something I have also talked about, all-too briefly. The Wikipedia pages to which I have linked talk about "classes" of war-built Admiralty trawlers, including HMS Bonnington, because there is no way to generalise about the origins of this fleet, which was 200 trawlers taken up, largely from the Scottish fishery, at the beginning of the war. Admiralty subsidies had helped pay for these vessels, and mandated that they be equipped with acoustic depth finders and radio compasses; because, in its diabolically clever way, it had provided an arsenal of simple ASDICs for retrofitting aboard. It had not been quite so clever as to foresee radar installations in place of the radio direction finders, but RDF has its uses, anyway. Nor had it been so clever as to provide in peacetime for the expansion of onboard accommodation to provide for a double crew of 30 men including "two skippers," which is not the way that the Royal Navy talks, but whatever. The source where I get that from also points out that since there was no way that the prewar fishing fleet could provide so many men, the balance were called up from the shore, and were not prepared for life on a trawler in the northern seas.

I think that's code for "They threw up a lot." North Atlantic sailormen are notoriously circumspect in their language. (NSFW version!)

You find these details, by the way, not in the Naval Estimates, but the Annual Report of the Fisheries Board of Scotland.) Talk about your weatherbeaten ships, on which the eyes of the Grand Army never set, etc, etc.

But, again, it is worth talking about costs:

Masefield reminds us that the coasters carried coal. He's not so clear (no-one is) where the men who manned this vastly expanded fleet came from. I'm not saying that they came out of the collieries, but truth is, the collieries leaked men everywhere, and not just in England. It might surprise Corrrelli Barnett (I know, I know) that the coal production shortfall was Europe-wide in 1945. I know it will surprise The Economist when it turns out that the country's nationalised coal industry will hit its production targets in 1947 (197 million tons, and not the briefly-discussed increased target of 220 million.) I take this point specifically from a leading article lamenting provisions for a five-day week for miners and proposing instead that as long as the crisis continued, everyone should just keep working all the time until. . .

If there's a point to this bit, it's that the editorial writers of the mid-century Economist are wrong, and that the reason that the mines are failing is that the miners have already been worked past the point of diminishing returns. The whole world has been. That is what is showing up in the collapse of English imports. Not to get ahead of myself, but Fortune, seventy years ago and one month, is writing about the relationship of the English postwar boom (again, eat me, Correlli) and the power crisis from which the United Kingdom has so recently (seventy years ago) recovered.

My interpretation: the world has worked so long, and so hard, that they need a rest. There's a reason that the next decade-and-a-half is going to be remembered as the era of the three martini lunch. I don't approve, but I understand.

The thing is, the people who directed this have no idea what they're asking for. Click through to the Wiki article on the Bengal Famine if you don't believe me, or come with me to look at the sad and neglected stacks from which I rescued Behrens for this post.  Or read The Economist! The people who have no set in motion the trends that are culminating in the spring of 1947 simply have no idea what they have demanded. In spite of that, they will get their postwar economic boom. (Even if The Economist will contrive not to notice, for entirely mysterious reasons). But they will get it because they will be forced to let people work less.

Email ThisBlogThis!Share to TwitterShare to FacebookShare to Pinterest
Labels: D-Day, Fall of France, Pirate History of the Atlantic, The Great Siege, Zombie Day