A Techno-Cultural Appendix to July, 1947: Attack of the Mutants

Talking about a Legion of Super Heroes story of the 1960s with a particularly obvious homoerotic subtext, Chris Sims once commented on the point where subtext becomes so obvious that it is surtext. As we were reminded this week, what, in connection with hilariously naive comic books is a joke, had an earlier life as the Very Serious Artistic Movement known as Surrealism.

With surrealism in its death throes in the month that America's middlebrows were introduced to Existentialism as both Very Serious and Very Sexy --the month that the UFO became official, on top of that-- I am very tempted to say something incredibly insightful and pithy about the trends in French intellectual fashion that have washed over North American shores since 1947. 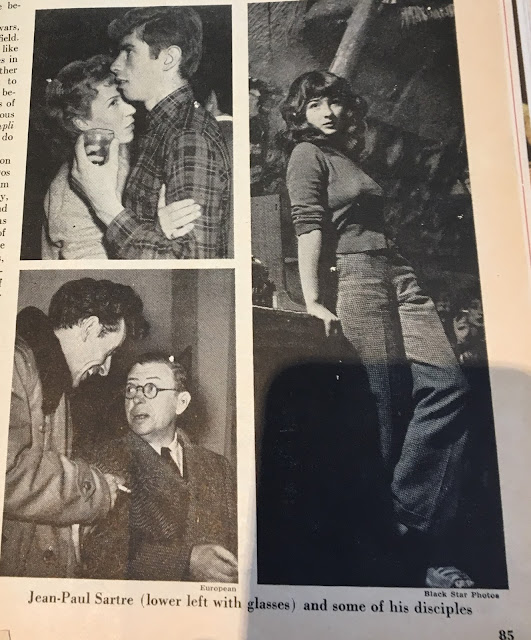 . . . But that's far too ambitious for me, even given that I'm casting my net pretty widely in insisting on a cultural investigation of technology this time around.

The big science stories this month revolve around Berkeley's new, 184" cyclotron. It will, soon enough, merge with generalised atomic hysteria to produce a popular literature of atomic holocausts, atomic mutants, and, more hopefully, "children of the atom," a theme imprinted on our popular culture by John Wyndham long before Patrick Stewart was fitted for a wheelchair. (After various false starts going back to H. G. Wells.)

That is, a genuinely popular literature. Looking at my vintage ad collection, I think that there's a case for arguing that science fiction had more popular penetration in the Forties than is allowed in the community's self-understanding. Again, a bit much to get into here. 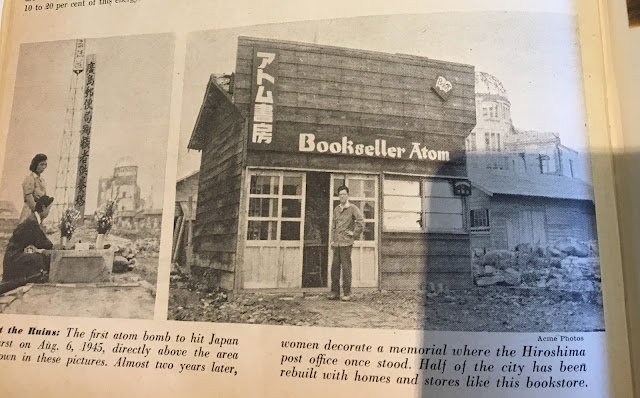 The story of the early postwar years of the Lawrence Berkeley National Laboratory are inevitably going to be an exercise in historical surrealism. As the American weapons programme lurches towards the Teller-Ulam thermonuclear device, state secrecy is going to enshroud its work, but, at the time, the secrecy could hardly be admitted, not only because of the desire to conceal the direction of the research effort; but a very real disagreement over the direction of that research. It was something of a revelation for me that there was an early (and public!) research focus on muon-catalysed fusion, eight years before Luis Alvarez was permitted to "discover" it, and I expect my Nobel Prize in History in the mail soon. More importantly, it is a lesson in taking the announced major cyclotron experiments of 1947 with a bit of salt. That said, it looks as though the science being done there in 1947 was more-or-less "stamp-collecting" science, working out the details of assorted atomic fissions and fusions that could already be predicted by theory.

The same can emphatically not be said about Melvin Calvin's work (with Andrew Benson and James Bassham), tagging molecules with radioactive carbon-14 produced in the cyclotron, to trace the multi-step biological process named after him, the Calvin Cycle. Or the Calvin-Benson-Bassham Cycle, or, as Wikipedia will now have it, taking no sides in the spectacularly ugly dispute between Calvin and Benson, the one, particular, "light-independent reaction" of photosynthesis. And at this point, I'm not even going to try to stumble any further into summarising work on carbon fixation when I can just scrape a pretty picture.


With due apologies to Nobel-winning work, this wouldn't be the story of UFO month, even with Hurricane Harvey (because carbon fixation), were it not paired with Curt Stern's work in isolating "genoproteins" from lamb thymus glands. There's a lot to like in this connection. There is the use of an endocrinal gland, which recalls the American xenotransplanting medical fraudsters of the Twenties and Thirties, a previous incursion of science fiction's fever dreams into humdrum reality with the same object of creating the Overman. There's the fact that this involves the prehistory of DNA research. Notoriously, James Watson, one of the three co-winners of the 1962 Nobel Prize for Medicine for discovering the double-helix structure of DNA, later wrote an autobiography that artlessly revealed that Crick and Watson may have stolen priority from Rosalind Franklin. I've already linked to Jerry Donohue's 1974 book review in the Quarterly Review of Biology that comes up at the head of search results for "lucky jim dna," although I am not sure that it is the precise article that Stephen Straker used to teach as a cautionary exemplar on the difference between actual discovery and sustained claim to priority. It has been a long time, and it will, again, suffice for the purposes of the conversation. And, finally, the fact that Stern's late work on the structure of DNA has been written out of the history of discovery is both typical of the sordid history of DNA research. (And I mean really sordid, in a way that goes far beyond "Franklin didn't get priority because she was a woman/Jew/Communist" sordid --true as that is.)

Without out getting too far into another set of weeds, it is worth pointing out that a critical and thoroughly cynical history of scientific and inventive priority raises serious questions about the social causes of innovation. We've lived the past century and more in a world where innovation, like capitalism and many other things, is supposed to arise from culture. Stephen's point in teaching the history of the discovery of DNA is that we can't trust the narratives upon which we base these cultural histories of innovation. So finding yet another excluded DNA worker is just more grist for the mill.

There are other ways in which Curt Stein is an interesting figure here in his own right. It is pure coincidence that he worked on low-dose radiation safety during the war years, but not that he was a critic of "racial hygiene,' for fairly obvious reasons, but also as a geneticist with standing to comment on the absurdities of eugenics. Among her other endeavours, Margaret Sanger was a eugenicist, and that might even be part of the reason that she is on Melvin Calvin's mind this week.

Calvin's attempt to expand his research into something relevant to Newsweek's busy readers on the go. "We have already learned," said Calvin, "that from the standpoint of utilisation of available energy from the sun, plants are relatively inefficient. They use from 10 to 20 percent of this energy. While it is pure speculation, perhaps when we learn the secret of photosynthesis, it will be possible to increase the efficiency . . . [T]here could be a corresponding increase in food production. Remote as this prospect may be, at the moment, it is probably not as remote, human nature being what it is, as the solution offered by Margaret Sanger to the problem of better balance between the world's population and its food supply."

This might be a bit of a fantasy, but the lab is also producing carbon-14 "marked" barley, to trace through the production of meat, eggs and dairy. I'm not sure what Margaret Sanger has done recently that she is at the top of Dr. Calvin's tongue. It's probably not eugenics. That was just me trying to bridge paragraphs. The International Committee on Planned Parenthood will be formed in 1948, and perhaps some preliminary work has reminded Calvin of Sanger. Perhaps Newsweek sent a female reporter, and he's being a creep. Perhaps it is the massive news coverage of the actual, ongoing  world food shortage. As we saw last week (or, to be more accurate, Monday night, thanks to work schedule disruption), the world seems to be staring down a food catastrophe next year.

The forthcoming crisis of '48, we know about, and, obviously, the fact that it won't happen, that the crisis of 1948 will be something completely different, is something that Dr. Calvin cannot know. What is striking is that he is formulating the argument not from the "food shortage," but rather the "population surplus" point of view. And here there is a problem, because Europe's population is declining, not rising. Well, actually, it is rising, now, but that's not yet apparent in the statistics, at least, according to Dr. Moncrieff.

Does Calvin, or, for that matter, Moncrieff, have any inkling that there is a baby boom going on? Reading the glossies back in '44, I would have said that he could hardly not have known about it. The problem is that it seems to me as though popular culture has stepped back from the wartime domestic fantasy of  hearth and home. 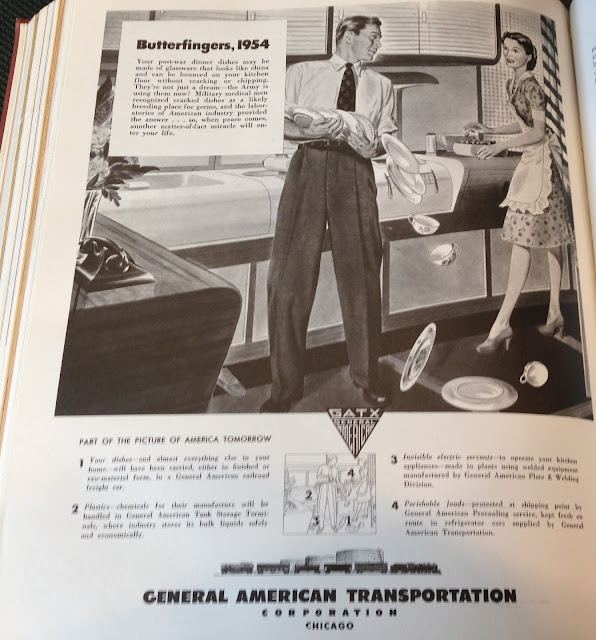 We don't care about babies any more. This perhaps reflects actual market research on the typical peacetime Time, Newsweek and Fortune reader (ads in Canada's Maclean's still relentlessly targets housewives). Perhaps it is just the prejudices of the industry. All know is that the "baby" thing has receded from public attention, and my suspicion right now is that people in 1947 are only very slowly becoming aware, if at all, of the change in the American, English and French population trajectories.

What does that mean? We've seen Dr. Moncrieff, or, rather, his careless epitomiser* come very close to an argument that I would make, that the rising English neonatal death rate is due to the declining birth rate. (That is, something something "demography causes secular stagnation.") Just to be explicit instead of trying to explain by implicature, I think that the epitomiser has recklessly launched into writing the article summary before reading to the end. Dr. Moncrieff's point is that, given the United Kingdom's ongoing demographic crisis, excess neonatal deaths are a particular tragedy.

So we are still in a world where the future holds too few (white) people, not a "population explosion," except of brown people. As of July, 1947, we still live in this world: 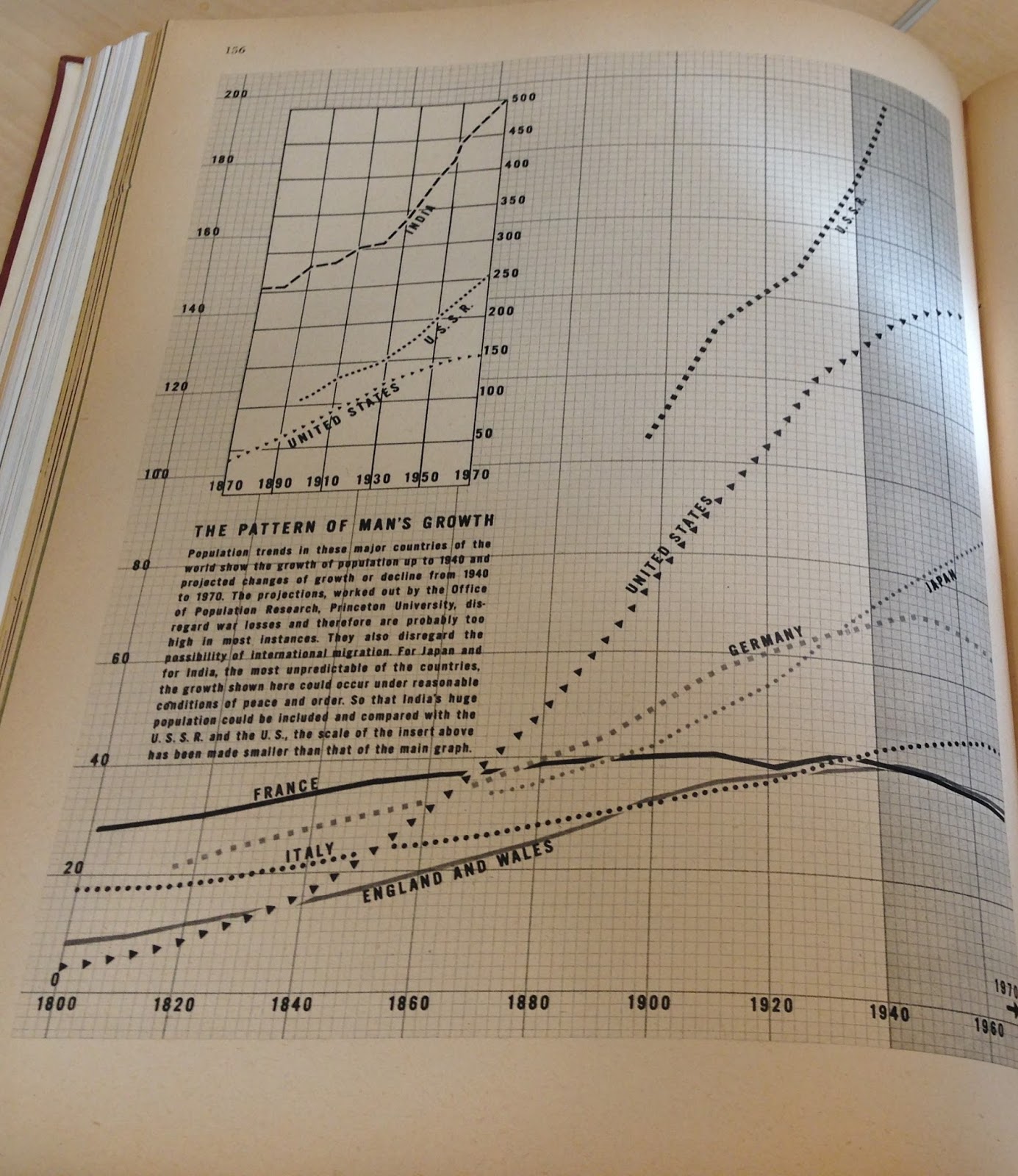 The frightening problem is a shortage of food, not an excess of people. Speaking in the of our surreal world of ideas and fantasies overlaying reality, it looks as though the Green Revolution comes before the World Population Explosion (of brown people).

*I can be critical because I never start summarising an article before I've read it to the end, as I suspect happened here. Ever.