A Technical Appendix to Postblogging Technology, August 1947: The Science of Cozy

Because honestly, The Engineer: Who wants to hear about heating houses in August? Or a really hot, summery Vancouver September, for that matter.


The "last corner" a returning veteran rounds before seeing his actual home, after all those long, weary weeks of travel back from Europe/Okinawa/practically anywhere on Earth.*

At the time this picture appeared, people were probably looking forward to the biggest and wildest American holiday season, ever. If so, they were disappointed. Retail spending numbers were good, but the story was one of silence: houses bright and warm, but for family, not wassail. Maybe it was the suffering experienced by so much of the rest of the planet that put a damper on the festivities. 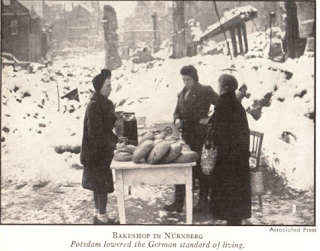 Maybe it is just a perception born of the first signs of the post-cost-plus advertising crunch. What I'm going for in this introduction is the idea that Thanksgiving and Christmas '45 were intensely private, bourgeois affairs: a moment to gather around a hot stove and bridge those lost Best Years of Our Lives. Private --and warm.

This September, we met the University of Illionis Department of Mechanical Engineering's Warm Air Research House, established 1908, not that you'll learn that from the Wikipedia article, in an article about the efficiency of humidifiers in heat pumps, butchered by either the author or The Engineer's editors until it was hard to tell what was going on. 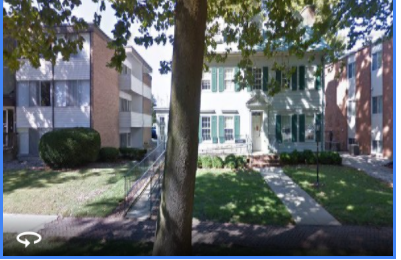 At the time, I scraped the Wikipedia picture of the place, as it exists today. This time around, I'm using the Google Street View version, because it gives a slightly better sense of the neighbourhood. Perhaps I'm being a bit impressionistic, but this doesn't look cozy to me. The apartment buildings to either side look a little too impersonal. Catering to students, perhaps? And don't even get me started on the unfenced setback look so beloved of urban planners. My current ride to work goes through a few blocks like this. Could there be a more naked demonstration of zoning's implicit agenda of sterilising land and artificially boosting property prices? (Rhetorical question: next, it takes a dogleg around a military base situated on ridiculously valuable land that DND can't sell it without throwing personnel stationed in Vancouver on the overly-expensive Vancouver rental scene (WTF?), and turns off just before I hit the 18-hole urban golf course. Although the planners can argue that all of that's beyond their power to fix, unintended consequences, can't do anything about it, oh, hey, let's have another park because there's not enough public green space!)

That being said, the former Warm Air Research House is in the middle of some fairly high density zoning. It's hard to say that Vancouver rents would be more reasonable if there were more neighbourhoods like this, and I haven't a clue about the situation in Urbana. If I had to guess, the House is someone's very long-term residence, and the current owners aren't at all bothered at being a registered historic location preserved for posterity. The heirs may be a bit concerned, but it's a bit hard to see anyone either building a new house on the lot, or fitting another multiple-occupancy unit on the space.

The reason that I'm making a big deal of the House's setting is that I am firmly convinced that it should be in a single-occupancy zone, with high hedges and and trees so thick you can barely see the houses, a swingset for the grandchildren, etc. What house, in all this continent, better deserves to be drenched in unaffected sentimentality and sepia-toned nostalgia than a former research station devoted to making homes cozy? Even the most cynical, world-weary historian of technology couldn't object to --Damn it, Graydon, stop ruining everything!.

At least heat pumps are part of the renewable-energy revolution, and have been for a long time. The Wikipedia article says that the first ground heat pump was installed in 1948 by Robert C. Webber, and since it's quoting the Furnace Repair Edmonton website, how can I argue?

That being said, I'm pretty sure that the heat pump in the article in The Engineer is part of the House's air conditioner. It's certainly not a ground installation, and Seichi Konzo, the most easily-Google-able researcher to work at the House, was an expert on air conditioning and forced-air heating, not hippy-dippy heat pumps. Besides, it's the Warm Air Research House.


Konzo is known to history, to the extent that he is known, as an air-conditioning man. 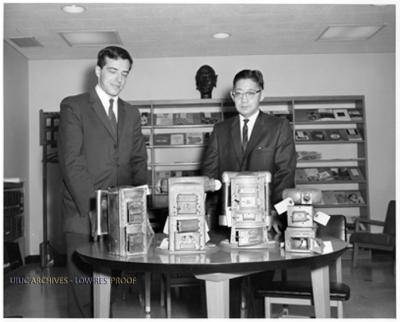 His Times obituary notes that he moved into the first air-conditioned private residence in America in 1932, and here he is, above, looking at humidifiers, not furnace burners. Everybody knows that air conditioning is the coming thing, and has been for awhile. We only have to look at the growth of the "Sunbelt" to see its sociological significance, and if you're old, like me, you remember the coming of the automobile air conditioner very, very well; but when the American Society of Heating and Ventilation Engineers presented Professor Konzo with a plaque on the occasion of his retirement, it was still 1972, a world of no-draft windows in cars and that goofy little heater in my grandfather's Land Rover that Did Not Actually Work. And they said:

"Professor Konzo made outstanding contributions as one of the leaders of the UIUC program that brought the heating and ventilating industry to maturity through meaningful research and interpretation and dissemination of knowledge. Complete comfort in household climate, which is taken for granted today in the United States, is due in large part to his research efforts. His masterful teaching of engineers and interpretation for craftsmen are recognized as responsible for creating the host of technicians at all levels that has sustained the industry. The American Society of Heating, Refrigeration, and Air Conditioning Engineers (ASHRAE) conferred upon him its Distinguished Service Award in 1963, the E. K. Cambell Award of Merit for Teaching and the degree of Fellow in 1967, and its highest honor, the F. Paul Anderson Award, in 1973."

In 1972, a cold home could still make bathtime a nightly struggle for a young mother. (And her children.) We know what there is to thank Union Carbide for.

It's also not all warm air, either. I mean, I would confine this post to warm air heating, if I could, but I can't because I have some great ads for electrical radiant heating products, too? 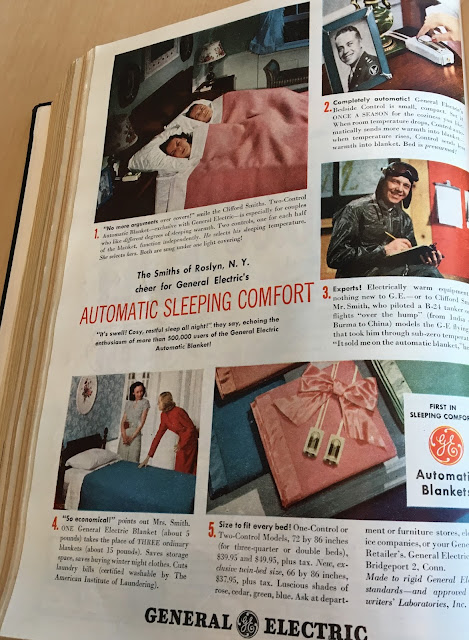 At work, we'll be worrying about cashier comfort up at the front, soon:

It's the "vital zone!" You can tell that menopausal employees are not on this advertiser's horizon, because I would strongly, strongly recommend that the reader not broach the question of which parts are hot, and cold. On the other hand, if you are retrofitting an industrial or retail space that stubbornly refuses to be warm enough for work, you are going to end up hanging heaters where you can, not where they will go best --if there is any place where they will actually do their job. So "vital zone" it is! 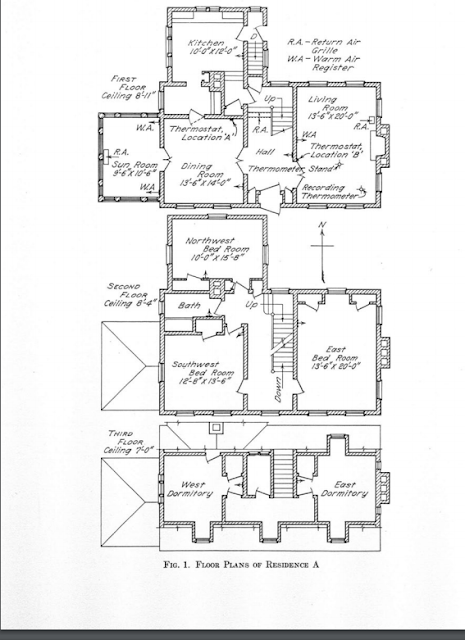 This is "Residence A," perhaps the House, perhaps not. As of the early 1940s, when Professor Konzo seems to have thrown himself into his work, almost as though there were things going on in the world that he could not bear to confront. It is taken from an article published in 1943 that is still in the University of Illinois files (most don't appear to be). Extensive studies lead to rather anodyne and counterintuitive conclusions. For example, the main benefit of having a fireplace on fuel savings is that it heats up the thermostat in the living room and leads the rest of the house colder. As often, when a mechanical engineer deploys the full power of research on the real world, the final conclusion is that, if you want a cozy house, you have to learn how to hold your mouth right when you build it. (It's a matter of locating thermostats and registers, routing heating ducts, and putting the right amount of insulation in the right place.)

Perhaps the real conclusion, undersold by the abstract, is that forced air is better than radiators. According to Popular Mechanics, as from 1952, the House got a thorough trial of radiant heating via hot water and steam circulation before the researchers settled on a forced-air system as superior. I assume that that was the state of the art as of the mid-60s, when the houses of the Port Alice new townsite were being thrown up, because I have fond memories of sharing the hot air registers with the cat, or cats, and dog. I don't think that that was how they were designed to be used, however. As for sitting Chef Boyardee premixed pizza dough on them to, hopefully, rise, well. . .

I think, however, the problem might have been over-zealous control at the thermostat. Those who didn't have to pay the "hydro bill," as we said in the day, even for an old oil furnace, could afford to be more liberal with what turns out to be a bit of technology with a history of its own. I'm told --by the Internet, and why would it lie?-- that we owe it all to one Professor Warren S. Johnston. In true "American inventor" fashion, he actually popularised something that had already been invented abroad, but it is not as though there's much to go on. The history of Professor Johnson is closed and comfy, small-town bourgeois, if you will. He came, he made his money, he died in Los Angeles in 1911; and if you google "Johnson Controls," you may well be led, as I was, to a palatial local office in your own city, and from there to a sumptuous website. There's money in thermostats, it seems --but very low profile money.

The business is about low profiles, though. It's not like you'd want this in your living room:

The good thing about central heating is that you can hide it. And no "fireman!" 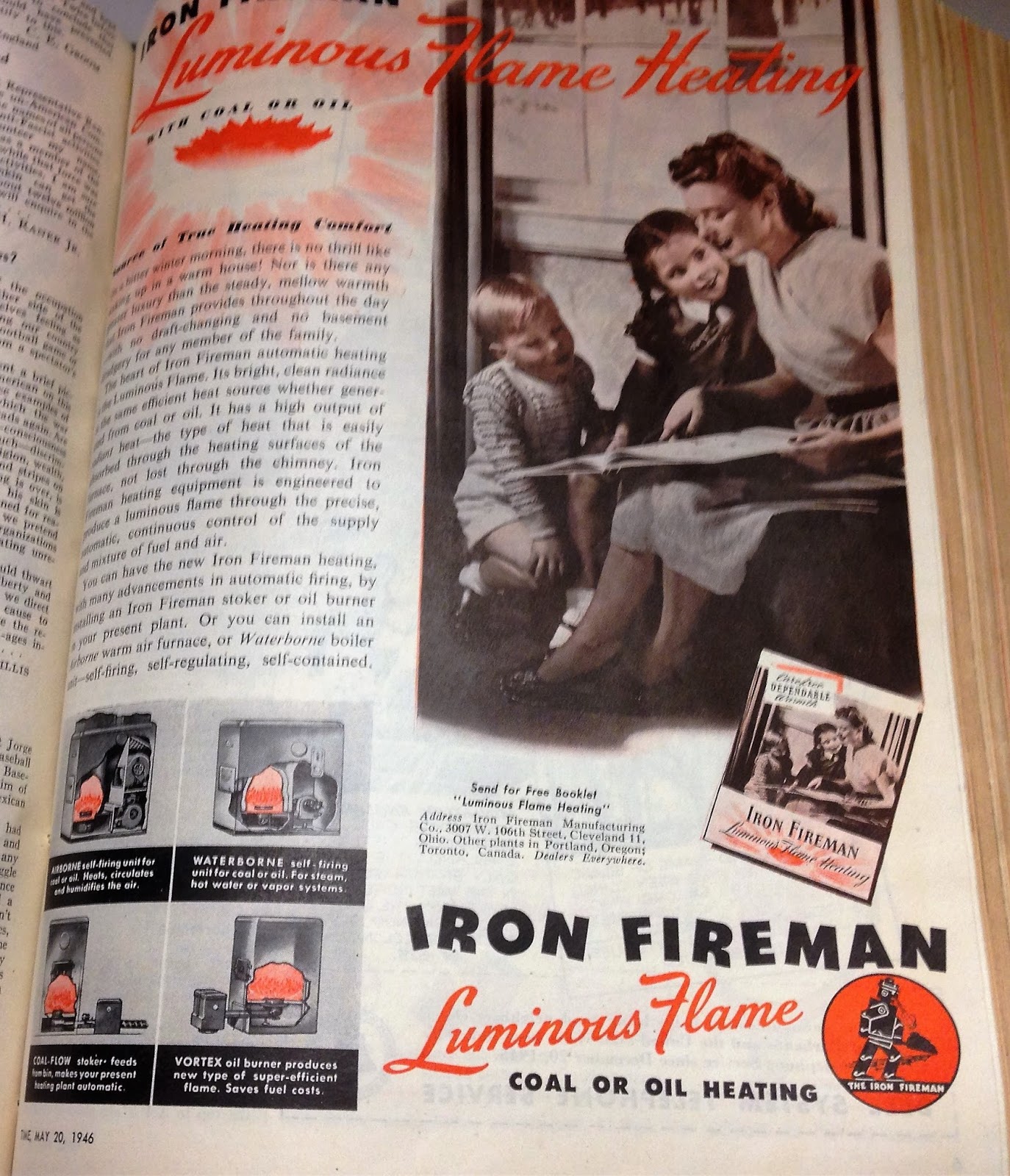 People like that Agatha Christie quote, where she says something to the effect that before the war, you couldn't imagine yourself so poor as to not have a servant, or so rich as to have a car. After the war, it's all reversed. In this ad, the selling point of the central-heating furnace is that it gets rid of an actual guy, the fireman, who used to attend the natural circulation furnace of people like the ones in the ad, shovelling out the clinker.

There would, of course, be a separate door around back for the fireman. It's not just an upstairs/downstairs thing; you do not want him walking across the carpets!

I'm not going to spend any more time today dwelling on the social and technical changes embodied in the modern, cozy house. The technology doesn't take much explication, and these fine old ads have done that; and the point, of course, is that I need the rest of this week to write something for next week.

In the meantime, get out and enjoy crisp Fall air, falling leaves, and put a log on the fireplace --it's carbon neutral! (Just remember that it only saves on gas if the thermostat and the fireplace are in the same room.)