The words of Tiglath-Pileser I (1114--1076BC), strong king, unrivalled king of the universe, king of the four quarters, king of all princes . . . attentive purification priest, to whom by the command of the god Samas the holy sceptre was given . . . whose weapons the god Assur has sharpened and whose name he has pronounced eternally for control of the four quarters, capturer of distant districts to borders above and below, radiant day whose brilliance overwhelms the regions,splendid flame which covers the hostile land like a rain storm, and who by the command of the god Enlil, having no rival defeats the enemy of the god Assur; . . .

At that time I marched to the insubmissive land Katmuhu which had withheld tribute and impost from the god Assur, my lord. I conquered the entire land of Katmuhu. I brought out their booty, property and possessions. Their cities I burnt, razed and destroyed. The remainder of the (inhabitants of the city of) Katmuhu, who had fled from my weapons (and) crossed over to the city Seressu which is on the opposite bank of the Tigris, made that city their stronghold. Taking my chariots and warriors I hacked through the rough mountain range and difficult paths with copper picks and made a good way for the passage of my chariots and troops. I crossed the Tigris and conquered their fortified city, Seressu. I spread out like grain-heaps the corpses of their men-at-arms in the battle. I made their blood flow in the hollows and plains of the mountains. At that time mL laid low like sheep, with the army of the land Katmuhu, the army of the Paphu which had come to the aid and assistance of the land Katmuhu. I built up mounds with the corpses of their men-at-arms on mountain ledges. I allowed the River Name to carry off the bodies of their warriors out to the Tigris. I captured in battle their king, Kili-Teshub, son of Kali-Teshub, who is called Errupi. I carried off his wives, his natural sons, his clan, copper kettles, five bronze bath-tubs, together with their gods, gold and silver, the best of their property. I brought out their booty. I burnt, razed (and) destroyed that city and its palace." 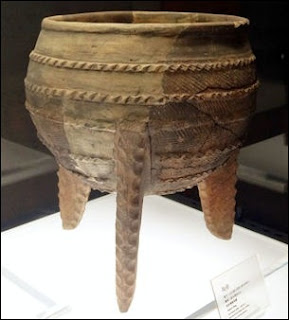 Welcome to the Late Bronze Age.

At that time I received tribute from Ahunu, a man of Bit-Adini and from Habinu, a man f teh city Til-abni, silver, gold, tin, bronze, linen garments with multi-coloured trim, cedar logs, the treasure of his palace. I took hostages from them (and) showed them mercy.
On the eighth day of the morning Iyyar

And now it's the Iron Age.

Assyrian and Neo-Assyrian kings do go on.* I've reduced the font in hopes of defeating the "wall of text" effect, and bolded the interesting departures in the strings of cliche and formula out of which these narratives have been strung. As far as I'm concerned, the key points are the "chariotry, cavalry and infantry" formula, which appears for the first time in this section of the much longer Ashurnasirpal narrative, and the detailed catalogue of bronze vessels which appears at the head of Tiglath-Pileser I's catalogue of booty. To anyone familiar with early Chinese history, this will resonate. The translations ("bath-tub," "casserole," "pail," "kettle") may be infelicitous, although I hesitate to mention it given how ungrateful it makes me sound (a million thanks are not enough for the Assyriologists who translated all of this), but the ritual importance of these vessels is easy enough to imagine given that context.

It is, admittedly, a bit tricky to place Tiglath-Pileser I within the Late Bronze Age horizon. The stylised date for the Late Bronze Age collapse is 1200--1150, and Eric Cline will even make 1177BC "The Year Civilisation Collapsed."
You can either see Assyria as avoiding the LBA Collapse, or having a late one, due to "Aramaean pressure" beginning, perhaps, towards the end of the reign of Assur-bel-kala (1073--1056), when he ran out of the resources or motivation to complete the text on his Broken Obelisk. In either case, there is a caesura between the Assyrian Middle Kingdom, from roughly 1056 until the Neo-Assyrian revival under Assur-Dan II (934--912). Given that Sharples wants to have the British Late Bronze Age collapse rollling across the country from east to west between roughly 800 and 700BC, I'm perfectly happy with "retarded collapses" in one country or another; but the idea does raise questions for causal explanations reliant on either Volkerwanderungs (as above), or the currently fashionable Climate-Change-Made-Them-Do-It explanatory model.

We can also wonder about our sources. Yes, cast bronze vessels play a much less important role in Ashurnasirpal's catalogues of booty, and the presence there of iron is as clear an indication of the transition to the Iron Age as might be wanted. It is also, going back to our original theorist, Hesiod (who gets a new lease on life here thanks to "hemerology") a very different kind of age. Yes, Ashurnasirpal collects roughly 10 tons of iron in Lebanon, a number not to be doubted given the amount of iron objects found by archaeologists in the Neo-Assyrian new cities; but as far as prominence in booty catalogues go, this is not the Iron Age, but rather the "Monkey Age." No-one cares about iron, bu the (Neo-)Assyrians seem more impressed with the monkeys they received as tribute in their campaigns along the Mediterranean coast than the narwhal tusks also included in the booty.

Iron is simply not as glamorous as monkeys (or singers, princesses with rich dowries; or, apparently, ducks.)


As suggested, though, it seems to me just a bit dangerous to take anything in these texts at face value. The Tiglath-Pileser text is mainly concerned with a campaign against the "Mushku," who have established themselves in the bend of the Euphrates. This ethnonym has had the Indo-Europeanists tied in a knot ever since, as the Mushki are identified with the Phrygians, speakers of a language closely related to Greek, and, supposedly, emigrants into Anatolia at the time of the fall of the Hittite Empire, usually dated to 1177BC. (One solution to the problem of Phrygians-too-far-east-too-early is to assume that the Assyrians have transferred the name to another group, which sucks the Dumezilian fun right out of it.) Meanwhile, the text itself, found on numerous clay prisms around the temple of Assur in the city of Assur, was an early test case of the reliability of cuneiform translation. Otherwise, Tiglath-Pileser's annals and narratives are well, if fragmentarily, documented in clay tablets and bricks found at Assur and sometimes Nineveh, and a cliff-face inscription at the source of the Tigris. There is an Internet tradition of an engraved text on copper plates, perhaps found at Comana, but it seems unknown to modern scholarship. Apart from the  cliff face inscription, the Tiglath-Pileser literature orbits his stele, one in a line of royal steles at the temple of Assur in Assur. One of the reasons that we know that the Assyrian state went through difficult times after Tiglath-Pileser is that many of his successors could never afford to commission texts for their steles, which stand bare, or perhaps with only the royal name inscribed.

In other words, to make a long story short, it's essentially all the same genre of literature.

The Ashurnasirpal narrative is very different. It is a single piece of work, compiled together from multiple genres, created by assembling texts inscribed on a variety of monumental sculptures erected at his palace at Calah [Kalhu]. This makes it very difficult to sort out just when in his reign this particular section was written, and what its original genre was. It is rather jarring to read of a Neo-Assyrian king "showing mercy," as opposed to flaying, beheading, heaping up corpses and burning cities; but, again, one has to consider specific context. It would be very nice if we could be certain that the first time the Neo-Assyrians counted cavalry as a division of their army was when Ashurnasirpal incorporated Aramaean  tribal forces into his army for a campaign westward towards Lebanon, after which he founded his own royal city. Unfortunately, we can't, and the best that we can say is that the "chariots, cavalry and infantry" formula appears for the first time towards the end of the 883--859BC period, while Assyrian cavalry itself shows up a little earlier, in the reign of Tukulti-Ninurta II (891--884.)

In an agreeably whiggish analysis, this cavalry of Ashurnasirpal seems to be a little inept. Another rider has to hold the reins of the archer. By Sargon's time, the rein-holders had evolved into a separate branch of light cavalry.

(The saddle probably helps, too.)


Further on a technical note, and sourcing my comment about finds of iron artefacts in Neo-Assyrian contexts, I need to mention Matasha McConchie's Melbourne thesis, now published as Archaeology at the North-East Anatolian Frontier, V: iron Technology and Iron-making Communities of the First Millennium BC (although I'm willing to be that that is not how this title would emerge from the MLA). Why? Because, apart from the catalogue of iron objects found at Sargon's Khorsabad, McConchie modestly offers perhaps the most comprehensive analysis of the actual quality of iron objects of the first millennium, BC. She shows that they are, with a few exceptions, low-carbon iron of low hardness, albeit high tensile strength. The reason for this appears to be that ironmakers did not have enough control of temperature in their furnaces and could not manage carbon uptake. The smelting technique probably passively favoured decarbonisation, and the one notable exception, an early piece found at Sardis, has a higher-carbon, higher hardness ("steel") strip welded to a backing of low-carbon iron. McConchie points out that this makes iron tools and weapons inferior to bronze implements of the LBA in terms of sharpness of cutting surface; they should be understood as "utiliarian" objects and material, made in a cottage industry, perhaps by individual households --a conclusion familiar from the British Iron Age. The Khorsabad assemblage is, then, of a large quantity of iron made in distributed, small workshops. No wonder there is no control of carbon content!

I know that I am probably belabouring the obvious, but the "iron axes" that Assyrian kings use to hack out paths for their armies are, in contrast to the "copper picks" used to "smash" them, are just what their place in the booty lists imply: Low status objects.

Drawing to a perhaps unsatisfactory and telegraphed conclusion (I need to talk about hemerology and Aramaeans!), we have further evidence of bronze's collapse in prestige, now dated to the Assyrian "dark age," and of an insurgent role for the new technologies and skills of iron-making and horse-riding, thrusting their way into the attentions of the great. Is technology changing things in a bottom-up way, or is that a hopelessly naive and romantic notion? Stay tuned!