(Since this happened seven years ago, somehow, a link.)

I was thinking about doing an appendix on the vocoder, which turns out to be a very important technology, but that would be hard, and blind landings and runway lighting are  considerably more pressing. I usually date electronica's invasion of popular music to the Beach Boys, and while I'm sure I'll turn out to be completely wrong about that, it sure hasn't happened by 1948!

So that's the original California Gurl covering Rebecca Black's ironically-enjoyed autotune hit from 2011 as a way of seguing to Arcata, California, the home of the American blind landing. More or less.

Since this is also about automation, funny story. UBC has quite an extensive engineering library, but one that was folded into the general collection, held in the stacks and storage of Main Library, a delightfully (for a certain value of tolerance for low ceilings, dim lights and generations of grime in hard-to-clean nooks and crannies) Name of the Rose-esque building that was torn down a decade ago. The replacement building houses a great deal of classroomish space on the same footprint as the old building, the space saving being made up with a massive compact book storage area serviced by an automated retrieval system. The wing occupying the same geometric volume as the old Fine Arts Library (and School of Library Studies) was turned into a dedicated reading room, with a certain residual of books left on the open shelf. To put this in perspective, the shelf holding the TL725 call number range that includes everything from a complete run of Airport (the engineering journal) to a 1929 manual on airport design, begins with a book about Porsche's automobile design philosophy --it's an architecture subject, for some reason-- and ends with one on the Roman pottery industry. Open shelf holdings on the subject of airports consists of a 1978 textbook and a book explaining the cost overruns on the then new-built Denver Airport, and proposing a charmingly naive theory about how megaprojects go over budget. (Not enough planning, I think. I didn't spend a lot of time with it.)

The point of the story? The automated retrieval system was down on Friday, for the second time in two weeks. I'd be a great deal more accepting of this if the new building weren't as big as the old one, although admittedly with less floor space thanks to the vaulted ceilings, which make a truly magnificent setting for study hall activities. Look, I understand that there are all kinds of problems with the open stacks concept. An alternative is fine. But it needs to work. If I were a bitter crank, I'd just come out and say that the modern infrastructure of scholarship is designed to make it impossible to access. Said fevered maniac would go on to observe that since no-one knows what the point of most of this research is, apart from keeping money flowing to post-secondary educational institutions, administrations are probably half-consciously all in on the project, and that it's amazing that we still have libraries at all. He would even advance a theory about how the p-scores all came to be janked.

Ahem. Okay, I'm better now, and I managed to put something together off the Internet and stuff like that. It's been aggregated.

Arcata, California, a Lexis-Nexis search reveals, seems mainly famous for a geographer's conference held there twenty years ago (this might be an artefact of the way the index is put together) and for a moratorium on new fast food restaurants. It's that kind of town, and one can only imagine the town's reaction if there were still a battery of twelve ultraloud bullhorns blasting the fog out of the sky over at the airport, today.

In the 1930s, Arcata was still a logging town, best known for having the worst flying weather of any airport in America, due to the extremely high prevalence of fog, dark nights and rain. Eric Conway presents the prewar story of bad weather, "blind" landings in the United States in terms of the development of the Instrument Landing System, an approach that focusses on bringing an aircraft in with a combination of instruments in the aircraft, and "localisers" on the ground that tell those instruments where the plane is in relation to the airport. Ideally, the ILS guides an aircraft along a "glide path" from cruising altitude to ground. Although since "glide path" gets into popular culture thanks to Arthur C. Clarke's fictionalised account of the sometimes-rival Ground Controlled Approach method, I've no doubt committed some terrible heresy in conflating the two. ILS is most often associated with the Lorenz system, which became the basis of the Luftwaffe's blind bombing system, leading to the "Battle of the Beams," and R. V. Jones' irritatingly self-aggrandising history of same.

Ground Controlled Approach is the one we're intuitively familiar with, in which an airport controller at a radar station in a tower "talks" an aircraft in. In the postblogging, we've become vaguely familiar with the objections to it. The radars are expensive (and difficult to maintain), and the operators' pay is a heavy burden on the airlines that used to be expected to operate the airports. More germanely, we are coming up on 13 August 1948, "Black Friday" at Templehof Airport, when the GCA controller "lost his nerve," and three C-54s crashed and burned on the runway.

Books about airports, including technical ones, tend to spend a great deal more time on the terminal than the boring stuff, and that seems to reflect peoples' priorities, as well, if the contrast between Tempelhof's magnificent public architecture and its badly outdated flying surfaces is anything to go on.

As the war went on, it became increasingly clear that that would not do. Conway traces the new emphasis to reports from Europe, where Spaatz's staff pointed out that Bomber Command wouldn't fly unless Met predicted a 500ft cloud ceiling over Britain, while 8th Air Force required 1000ft. Blind bombing aids were only half the battle, David Langmuir told the director of the MIT Radiation Laboratory. Or the next battle, he apparently went on, as the director's main takeaway was that he was suddenly being asked to take on a major postwar project while he was doing his best to shut the lab down and send its staff back to civilian life.  The upshot was the CPN-18 project, which had a somewhat quixotic wander through the halls of bureaucracy due to being approximately an order of magnitude more expensive than the entire CAA budget. It would take a new climate of public opinion to persuade Congress that it was the nation's job to provide research and development funding for commercial use on such a scale. In any case, talking a plane down is hard, and GCA would never be much more than an auxiliary to ILS.

Meanwhile, Army and Navy alike were looking into more practical approaches to blind landings. This is where Arcata comes in. Conway says that the services turned to the University of Southern California to manage the project, but this contract "failed" in mid-1946. I am guessing that that is what the brief surge in publicity for sonic, ultrasonic, and fogbank-seeding methods is about. After that, the services turned to United Airlines to implement what seemed like a sure-fire solution.

We've heard enough about FIDO by now that the details surely don't need more coverage. The British abandoned FIDO because it was egregiously expensive, but I'm insanely happy to see that United Air Lines passengers actually did have reservations about landing between two towering walls of flame. It also turns out that turbulence from the FIDO lamps was dangerous enough to crash several small aircraft during the years it was in use in Britain.

The plumbing did not go entirely to waste, however. I may have to take my snide comments about Rufus KleinSmidt back. Even as people were farting around with ultrasonics, the USC team was taking a much more basic step: diverting some of FIDO's abundant natural gas flow to a 3,500 foot array of 38 75ft towers, 17 on each side, with a 5000 watt natural gas light on each. It turns out that there was a constituency which had been overlooked in the arguments over ILS and GCA. Pilots wanted to at least start tackling blind landing with good lighting. This really doesn't sound like the way to accomplish that, but it at least reflects some clear thinking about how to go about it, once the authorities were reluctantly persuaded by all those crankish, borderline nutsy-kooky letters in Flight. (And elsewhere, to be sure.)

So what does this good lighting consist of? Once I figured out what I was looking for, I found some blogs that do a pretty good job of explaining ALS, including this one, from which I stole this picture with pretty lights that probably blink. 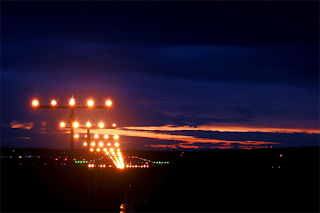 The upshot is that a plane approaching an airport along the designated approach route (that "glide path," again), will see a series of lights that, in a very complicated way, will tell the pilot what visibility conditions are, which constrains heights and breakoff points, what those are, where the plane is with respect to them, whether it is over or under height, and so on.

At least, that's the upshot in a fully developed system. The one that went into Arcata in 1952, after a screaming fight with pilots, was nowhere near so elaborate, and also a "centre line" system, instead of the "slope line" system the experts preferred. I have no idea what that means, but Conway explains that Congress was so upset with the pilots' union that it zeroed out funding for the Arcata project after it was compelled to adopt the pilots' preferred system, in the grounds that if no-one was going to listen to the experts, there was no point in funding investigations.

I have no idea if that is true, but I do know that the natural gas lines were removed from the scaffolding at Arcata and replaced by Strobeacons by Sylvania, now produced by a Japanese firm, which provides a brief outline at its website in hilariously retro Japlish. Popular Mechanics from 1952 describes the strobe lights, which used massive capacitors to energize xenon gas bulbs, as "shooting fireballs in the sky," guiding planes to safety.  It seems a little odd that we're conceding the invention to Sylvania here, so I'm going to slap a Patent Troll label on this post out of generalised suspicion. Not because it's ended up featuring Rufus KleinSmidt! Maybe I should do a "Horrible self-aggrandisers" tag? 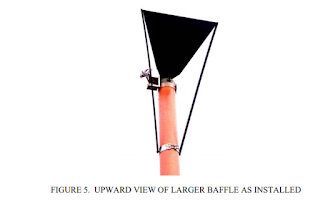 Back in bucolic northern California, drivers on the distinctly rural-looking "main road" that runs along the Arcata airfield perimeter fence were less impressed. It is possible that their concerns were not taken entirely seriously, given the frightening series of accidents involving planes coming down along the lighted approach routes as the Fifties went on. According to the potted history in the report to the FAA, above, it was not until 1975 that anyone was stirred to contemplating action in response to commuter complaints, and nearly another generation before a team from the FAA arrived to put lampshades on the Strobeacons. (The team calls them "baffles," because that sounds more scientific.)

There's probably more to be said here. I took a third year course on the physics of illumination. It's an important subject! It also has interesting parallels with problems of sound and a bearing on architectural practice, particularly designing libraries where you can read. And it involves a great deal less math than replacing parcels of sound signals with bandwidth units and reconstituting voice from the resulting signal using a keying signal, or whatever it is that vocoders do.