A Meta-Technical Appendix to Postblogging Technology, August 1948, I: Productivity, Again 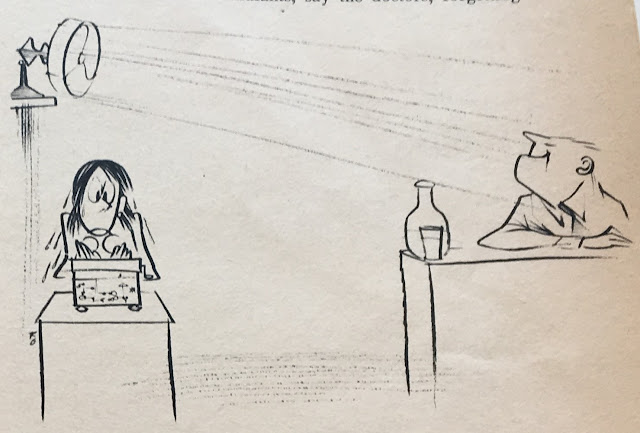 Fortune's August, 1948 article on working in August, which couldn't have been written in August, but might have been inspired by a June heatwave, because the writer and the staff artists threw their heart into it. The results are still a pretty inconsequential story. As far as it is about anything, it is, perhaps, a mild recommendation to not be so liberal with the salt pills. (Remember salt pills?) Or, it is an impressionistic account of air conditioning's ongoing penetration of American life.

That said, looking back from 2018, it is a reminder that, seventy years ago, they sometimes had to close factories and even offices because it was too hot to work. Distant times! The same issue carries Ala'i's tone-deaf efforts condeming Iran's ongoing dam projects for diverting the "one-tenth" of Iranian agricultural labourers who were  healthy enough to work, and the ongoing "Deutschmark miracle," in which the miraculous recovery of the German economy somehow happens around and behind the miraculous recovery of German agriculture, which provided the key ingredients for a steady rise in the average German caloric intake in the summer of 1948.

While I am not going to argue Ala'i's public health credentials here, this is perhaps a good place to bear in mind that, in much of the world in 1948, the amount of work done by the hand had a lot to do with the amount of food the economy chose to spare its labour. Heat waves aren't that different from famines in some ways. While offering horse sense on the subject of salt, Fortune is unaware, as most people were, that the body is also quickly depleted of phosphorus and especially potassium. It offers the common, but incorrect, idea that people eat less at very high temperatures as an explanation for the ubiquitous low-grade heat stroke supposedly inflicted by "over-eating" during a hot spell.

Taken together, "laziness" is a great explanation for low productivity if you're using your monopsonic power as an employer to deny your labour force enough food. The coal crisis tended to bring European economies face to face with the limits of this logic. I'm not sure that other people took it on board, and that particularly applies to the United States.

This is important because, through the Marshall Plan, Americans were in a strong position to dictate terms of aid; and the idea that European socialists were lazy was ubiquitous. It would also be irrelevant, since the class of American business leaders who could be found to express opinions about these things seems to have overlapped fairly strongly with the class of American business leaders who were underemployed due to their extrusion from actual management duties. It is not irrelevant because the theme was taken on board by British thought leaders. The echoes of the theme of perennial low British productivity have been heard on this blog before, but with the formation of the Anglo-American Council of Productivity, they become the story of the day, and invite some investigation.

So let's take a look at the headline industry for a second, as far as I picked it out of The Economist: 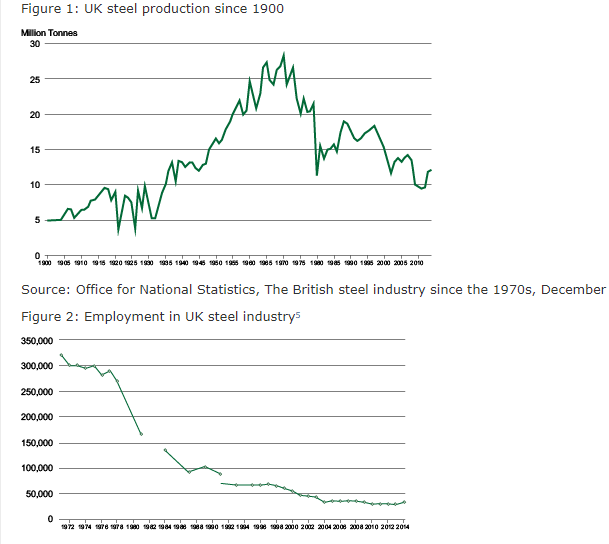 The story of the postwar decline of the British steel industry is best told by the centre section of Figure 1, above, scraped from a United Kingdom Parliament briefing document. See that huge dip, showing the effects of trade union demarcation, underinvestment, and feckless Labour administration with nationalisation and all? The dip, which goes from 10 million tons in 1940 to an absolute low of 28 million tons in (it looks like) 1968, is stark testimony to . . .

Wait. Isn't "28" bigger than "10"? I'm confused. At least we can compare it with an ultra-efficient American production
. . . . Which, uhm. Yeah. Well, let this be a reminder to everyone about  just how much trouble you can get into when you let facts into a perfectly good argument.

This would be a nice proof of something, but it turns out that it is cherry picking. Even The Economist focsses on "the radio industry" as the great British disgrace, and that has been the focus of such literature as looks at Rostas' doorstopper.

Fortunately, this is great for this post, because, as I've been making a big deal of for weeks now, the other big story this month is the latest "robot factory" foofaraw. John Sargrove's Electronic Circuit Making Equipment, the ECME, not only has an acronym, just like ENIAC, but produces three radios a minute. If the American bench worker is 3.48 times more productive than the British, then bring on the robots!
By the way, if anyone is interested in the politics behind the Anglo-American Productivity Council, here's a JSTOR link. It's not very revelatory. Labour is pivoting towards the centre in anticipation of the general election, and needs a way of justifying "wage moderation." The idea that  wage increases should be linked to rising productivity (where have I heard that before?) was persuasive. It was also up Stafford Cripps' wheelhouse, and it was flattering to Paul Hoffman and to the kind of business executive who got involved. The "3.48" story offered argument enough that something had to be done, and if there's one thing I've learned from reading Fortune, it is that there's a kind of businessman who is very sure he knows what needs to be done.
It seems clear now, and even at the time, that one of the things that needed to be done, was an audit of Rostas' numbers. The systematic nature of the bias in his data suggests a basic problem in his analytical method. I am sure that Peter Scott (pdf) was not the first to notice that comparing the 1935 British Census returns with 1939 American figures, and using the 1935 exchange rate, was going to produce a systemic bias in favour of American productivity figures. Scott, recalculating, finds that American workers in the radio sector are 2.1 times as productive as British, and closer to the average, and to the comparison of national incomes. (475 versus 661 "international units per male earner per annum", in yet more relevant reporting from this month.)

The traditional argument is that British industry was less capable of taking advantage of economies of scale due to a smaller domestic market. Against this, the case against the radio industry is that radios had less market penetration in Britain due to higher costs. The British "cartel" was leaving money on the table by keeping prices up, and profits down. Scott shows that this estimate, based on British radio licenses, fails to account for non-licensed use, and that British market penetration was actually higher, in spite of higher prices. Taking much larger American exports into account, he notes the dominance of America car radios and "midget" radios, the latter being low cost, low profit items with no parallel in British industry. Well, except for Sargrove . . .

Also, if you will recall from the interminable Radio Digest catalogues-masquerading-as-articles stories, the American radio industry was not dominated by Fordist conglomerates, but, rather, by numerous garage-scale small manufacturers, just like Britain. Scott has the numbers, if you're interested. The industry was not consolidating in either country, and, given the rate of technological change in it (remember FM?), there was no particular reason for it to do so. Investment in mass production was clearly an enormous gamble when the product was evolving so quickly. In both countries, the original radio patents were held by a small group of large manufacturers in a "pool," and in both countries, these large manufacturers struggled with the rapid mass obsolescence of the large inventories of radios they produced by "mass production" methods. Faced with popular demand and a variety of license-avoiding tactics, the radio cartels in both countries ultimately acquiesced to the growth of small, license-paying producers. However, circumstances in the United States were much more favourable to anti-trust action. The upshot is that Marconi's patents were honoured more in Britain, and license payments were higher.

This brings me to the most interesting and counter-intuitive part of Scott's argument. License costs were fixed on a per-valve basis in Britain, and dominated price considerations. To outsell the competition and make money from added-value, British manufacturers (of "valves" even more than radios) had to emphasise "performance, design, innovation (`gadgets’)," to a greater extent than American manufacturers, who had more room to compete on price.  British valve makers aimed to reduce the number of valves needed in a radio, and focussed on multi-stage, high gain valve designs, to higher tolerances. The American scene was able to focus on multi-tube radios, increasing the number of tubes to increase performance, while also increasing the barriers to entry into the capital-intensive business of valve-making. When marketers entered the scene on the radio side, American radio manufacturers could double down on this strategy. British radio manufacturers could not, because they could not get the valves.

So it took me a while to track down someone on the web who thinks he knows what might be going on with the Sargrove radio, but I did! According to Finnish amateur historian Pekka Ritamaki (pdf), the Sargrove radio was based on Sargrove's UA-55 two-function valve, which seems to be derived from the Loewe NF three-function tube, which allowed Loewe to make a one-tube radio --the Sargrove was two-tube, I think. Loewe also spray-painted the non-tube parts of the radio circuit, leaving the Germans (but no-one else) to claim this 1926 radio as the first "integrated circuit."

Since a single valve that combines signal amplification with audio output tends towards the complex, Sargrove's UA-55 had no less than nine pins, an arrangement for which no socket then existed. The fact that British Tungram would need to make its own sockets to go with its proprietary tubes, must have pointed Sargrove in the direction of manufacturing a complete circuit "board." (Quotation marks because we have another example of an inventor struggling towards a concept that hasn't really crystallised yet.) A decade later, not only the concept but even the "robot factory" had emerged, by Sargrove's account, fully fleshed. (There are rumours of a completed Sargrove radio at a museum in Australia, but these have not been confirmed. A New Scientist article is full of visions and plans, but no concrete products. Sargrove, ever the mensch, blames his tools. The relays and tubes in the ECME were constantly breaking down, and needed regular repair and replacement.)* He was forced to develop a sideline business, travelling the country, lecturing on how automation was the solution the the labour shortage, arguing that plants like the ECME would allow the "redeployment" of labour to more important national goals.

By the time that Sargrove got a publicity spot in Wireless World in 1955, the basic problem of first costs had been grappled with, and the pitch for the ECME had turned from manufacturing price to ease of quality control due to the "neater" assembly. This is pretty weak stuff, and a little strange, given that the output diagnostic checks were also automated, However,descriptions of the ECME manufacturing process make it clear that the "unskilled female labour," pictured here, were in charge of adjusting the "variable controls" after they installed the tubes.** Exactly how the two operators are supposed to cope with a flow of three radios a minute is left unexplored, although white-coat repair guy in the background is a good indicator that it won't be such a problem in practice.

What's even less clear is how selling a low-labour, low cost, mass-produced British radio to under-employed Asian masses is a good idea. The Japanese transistor radio will conquer the markets that Sargrove is targeting, but it was not made in a high-wage economy. I think. It's not like I have to have an opinion on the rise of the Japanese consumer radio industry yet. Maybe Sargrove had the business model down, if he could only have made the ECME work. Although my own inclination is to call bullshit on the  whole "productivity" story.
___