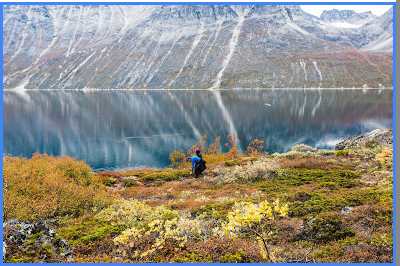 This is Tasiusaq, Greenland, from Google Maps. Tasiusaq is a settlement of 90 people, surrounded by three sheep farms, and not exactly full of amateur photographers with Internet access, but  "Monica T.," and her friends went there in 2015, and took some awesome pictures, of which this is one.

If I had to guess why some outsiders might have been in Tasiusaq, it would be its proximity to Qinngua Valley, about fifteen kilometers away. Qinngua Valley is a 15 km long river valley terminating at Tasersuag Lake, which drains into Tasermuit Ford, and is an honest-to-God Greenland National Forest.
The actual woodland is only a few acres in extent, and not unique in Greenland, as the Wikipedia article claims.  Somewhat surprisingly, the Greenland Norse-era history of the area is unknown, in spite of the weather, agricultural possibilities, and its centrality in the old Eastern Settlement, but there is a large Norse site at the bottom of the valley. I was directed to it by Dr. Dayanna Knight's recent Viking Nations: The Development of Medieval North Atlantic Identities, which several times obliquely refers to a contrarian thesis that Erik the Red's Brattahlid was located there, rather than the traditionally accepted Qassiarsuk on Tunulliarfik Fjord.

Repeated, unexplained, oblique references in a monograph derived from a doctoral dissertation inspire me with the suspicion that Knight is keen to tell a story that couldn't get by her committee. My subsequent investigation leaves me less confident of this first assumption, but, what the heck, it is what directed me down this road, and Knight's commitment to "practice theory" archaeology is interesting, if not well engaged below. I have some photos and maps to post, so here we are. Specifically, we are at the page break.

It took a while to find a way into the literature, but eventually I found this paper, on Academia.edu. There's been quite a bit of archaeology in Greenland recently, thanks to someone at the Leverhulme Trust reading Jared Diamond's Collapse and throwing ONE MILLION DOLLARS at corroborating (or not) his zeitgeistalicious thesis.

Kevin J. Edwards, J. Edward Schofield, and Jette Arneborg had the delightful task of finally following up on Ole Guldagger's conjecture, and disposing of it. The original objection to Brattahlid-at-Qassiarsuk was phrased mainly in terms of the fact that the name refers to a steep hill, while Qassiarsuk is about the least hilly place in a very  hilly country. Qinngua is noticeably hilly, larger, and what about that National Forest? Wouldn't Erik the Red naturally pre-empt the best land around?

This is actually an old argument: Guldagger's skepticism is second wave. People have been arguing that Brattahlid was at Igaliku for literally centuries. It is not a  more plausible location for Brattahlid, on the basis of the ruin group, but it is from the perspective that it is the true "new Brattahlid." 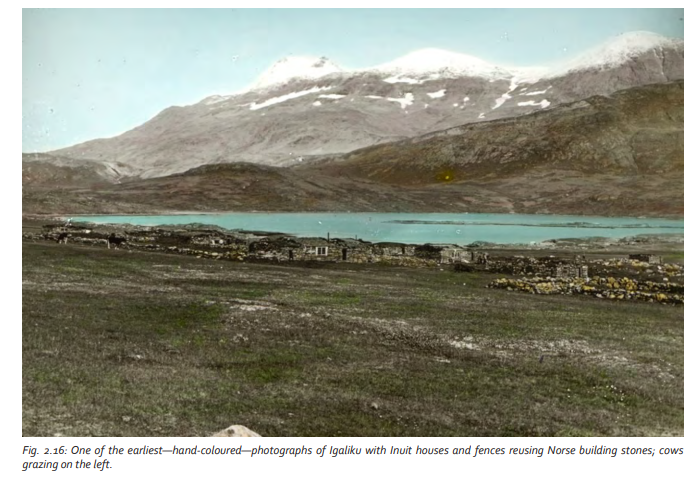 Anders Olsen and his Inuit wife, Tuperna, moved to Igaliku ("the Gardar that was") from Nuuk in 1780. They were not the first kitchen gardeners in Greenland, but the site allowed them to build from that experience into full-scale market gardening, providing milk and vegetables (turnips, it turns out, are a Greenlandic staple) for the Royal Greenland Company. Their descendants became the patriarchs of Greenlandic agriculture, leading the shift to sheep farming in the Nineteenth Century, and back to mixed pastoral agriculture in the last. Their descendants use modern and more efficient methods to produce the maximum yield on some 1200 hectares of permanent hayfields in the Kujataa district, the former Eastern Settlement. Turnip and a glass of milk go well with fermented seal blubber.

If you're curious, but not curious enough to follow the link, Edwards, Schofield and Arneborg report that the Qinngasa site, although large, lacks the large church structure and associated graveyard that are deemed to be indispensable markers of high-status Greenland Norse sites. I'm also, personally, less taken by the case for Qinngasa on closer reading, as it turns out that it is hardly the only underutilised candidate area for the "best agricultural land in Greenland." 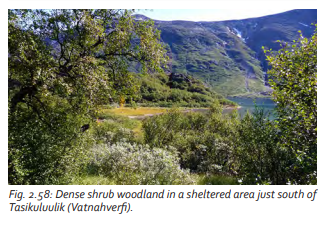 The Vatnahverfi has even been described as "lush." Subject, like the Qinngua area, to fairly extensive archaeobotanical work, recent work has relied on a set of clues indicating manuring, irrigation, and persistent sign of barley cultivation. I personally think that last is a bit of a misdirect. Modern Inuit farmers routinely sow barley to enrich fodder crop yields, without reaping, or wishing to reap, a mature crop. Not to rest too hard on recent profound insights, but it seems to me that if you're going to irrigate, you really need a  halophytic crop to manage salinisation, and barley checks that box. The presence of drying kilns may indicate that Norse farmers tried harder to salvage edible barley than their modern successors, but the basic argument really doesn't change. The one thing that all of this research has underlined is that it was a big waste of Leverhulme money. The Diamond thesis is wrong. Greenland Norse farmers left their land in as good, if not better shape, than they found it. The forests and native ecosystems survived, while Norse farmland was readily taken up by the descendants of Anders and Tuperna. Modern explanations of the "collapse" therefore return to the breakdown of Greenland's trade relations.

The Brattahlid story has other dimensions. Ari the Wise, the first scholar to attend the circumstances of the landtaking of Greenland, if he existed, has some dubious things to say about Erik the Red. I hope you do not think the less of my praise of the UNESCO submission for being taken by the extent to which they agree with my skepticism about this story of a single, three-year exploration, followed by a single mass migration. That said, Ari may have been naive, as a thirteenth century scholar often seems to be in retrospect, but he puts his finger on something strange, right away. The farms of the Eastern Settlement are often named after someone. This is not the case in the rest of the North Atlantic Interaction Sphere: Not the Faeroes, Iceland, or even the Western Settlement of Greenland. Ari supposes that the men behind places such as Herjolfsnes must have been captains in Erik the Red's fleet, and "men of substantial stature." At the same time, Ari finds it odd that they are not related to the leading Icelandic families of the era. He does not say that it is odd that Brattahlid follows the more common North Atlantic naming practice that tags it with a simple geographical label.

Nevertheless, it is clear that Brattahlid was, and remained the lawspeaker's seat down to the end of the colony. Erik the Red's dynasty disappears from the scant literature with his son, or perhaps grandson, but the place retains centrality. When a diocese is erected in Greenland, the lawspeaker has it in his power to grant Gardar/Igaliku to the bishop. The UNESCO report underlines just how odd this is, and in an exception to its normally solidly scientific and well-edited style, launches into a digression about the presumptive lack of evidence for local unrest in Norse times, which is presumably the skeleton of an argument that the lawspeaker probably had not recently removed an overmighty vassal from Gardar --the usual circumstances in more prosperous regions.

But the name represents "habitus." Stripping away ideological claims about use and practice, the modern archaeologist can hope, by rigorous application of the cloudiest jargon, to penetrate through to directly link embodied practice with everyday life and come to understand the origins of these communities. The patriarchal names of so many Eastern Settlement localities is evidence of unique origins: but ones that do not extend to Brattahlid itself. Brattahlid is the most "normal" landtaking in the Eastern Settlement, although typical of the Western Settlement, so scarcely unique to Greenland. The presence of a church building and associated cemetery, and lack of pagan burials, undermine the saga narrative, in which Erik is a pagan, and which pushes the settlement of Greenland to just barely before the onset of the Christian Atlantic. That would be a reason for looking for Brattahlid elsewhere, had pagan burials been found anywhere  in Greenland.

Writing about pagan burials in Iceland, Knight's practice theory-oriented outlook emphasises their social role. First generation, early settlements tell us very little besides the fact that they were built by groups that were very certain that they could reproduce their existing social relations in the new setting. Food security had to be guaranteed in advance: the transfer of pastoral agriculture implies careful planning so as to have young animals suitable for transport; items found on site are "utilitarian." They do not turn back on the Atlantic context, because it is precisely from that context that the new settlement comes. Pagan burials, then, reflect involvement in pagan networks. Ship, ship-outline, and horse burials make this explicit.

But so, of course, do cathedrals. Whatever happened in Greenland, it was intimately engaged with a North Atlantic interaction sphere. At various points, in discussing Brattahlid, Knight is drawn into discussions of the Brough of Birsay, supposed site of a Pictish monastery, and candidate mother house for a lost "papar" network of daughter monasteries in the earliest stages of the western movement; and to purported "Irish" style round, turf churches, associated with papar hermitages. Whatever we make of that romanticism, there is no doubt that the Gardar cathedral was erected by a British architect, possibly Irish.

It's too bad that my Windows-Chrome-Blogger related save problems of last week lost me Time's science pages for 16 August. Not much science going on there, but we would have been treated to a discussion of a 1948 excavation cutting through a supposed "Norman church perimeter" around the Newport Tower.

The fact that the Tower is mysterious has a great deal more to do with the obscurity of Rhode Island's early history after colonisation. It turns out: Gardar, too. According to our isotopic and bone evidence, farm abandonment actually started fairly early in Greenland, in line with an increasing reliance on seal meat, especially amongst lower status individuals. As far as we can tell, the seal hunt was the guarantee of food security in the Eastern Settlement from the time of its establishment, but it became more, not less, important over time. If we are not to write everything off to ecological collapse, or loss of agricultural land due to sea level rise, then this is because sealing (and walrus hunting) became ever more important. Dairying and cathedral building, and the clothed corpses buried at Hvalsey, skirting Christian burial practices to the extent that the clothes represent significant wealth, are as much practices of identity reinforcement as anything else.

The more Inuit the lifestyle became in practice, in other words, the more the Greenland Norse clung to "European" practices to signify identity. One begins to discern a story somewhat similar to the one invoked to explain Dorset Culture art. Social discipline, enacted through the ritual aspects of everday practice, is needed to keep people sealing. Without it, people defect to easier, or, at least, less dangerous lifestyles.

Just to make it explicit, I have argued, in previous installments of this series, that the appearance of the Greenland Norse is most plausibly understood as the same process as the one that occurred in 1780. Anders Olsen really is the modern Erik the Red, or the other way around. Inuit hunters, presumably drawn to the earliest "walrus hunters," became Norse. It's ethnogenesis, again! And the story of the "collapse," then, is one of reverse ethnogenesis. 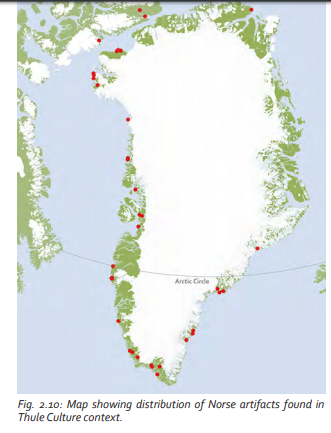 Once again, the fascinating thing is that the densest area for discoveries is Tasilaq, by consensus of the sagas the earliest visited and most commonly-passed Greenlandic settlement. Paleo-Eskimo throughout, and not well characterised by existing narratives of Arctic cultural successions. We  need to know more about Tasiilaq!
Posted by Erik Lund at 7:41 AM

Email ThisBlogThis!Share to TwitterShare to FacebookShare to Pinterest
Labels: Cheese, Gathering the Bones, God Speed the Plough, Goodbye to the Vikings?, Old Europe, Pirate History of the Atlantic