Gathering the Bones, XX: Salt of the Earth 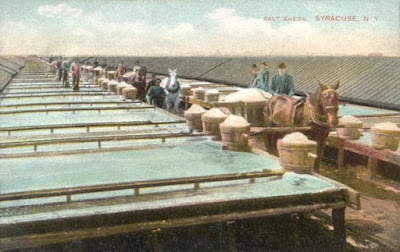 I hope everyone enjoyed my vacation week as much as I did! I went away with the notion of writing a "Gathering the Bones" installment on the Erie Canal, and came back with an eerie synchronisation to report.

To echo what you'll hear at Wikipedia if you can be bothered to follow the link, and for what it's worth, you may not, the Canal is a 584km "navigation" from the Hudson River at Albany to Lake Erie at Buffalo, New York. Lake Erie has an average elevation above sea level of 173m, compared with sea level at Troy, New York, as the Hudson is one of those odd, sea-drowned river valleys that occur in formerly glaciated regions. This is an enormous climb for old-time navigations, where the locks have to be evacuated by atmospheric pumps, limiting the total lift to five meters or so (shamefully, it's the old Imperial measure of twelve feet that is sticking in my mind). There are no less than fifty locks along the route, along with other engineering features, notably aqueducts carrying the canal over river valleys, or, conversely, rivers over the canal. Also, in order not to be too inconvenienced by the canal, locals were allowed to throw bridges over the canal at a height that

--Well, I'm not sure, "low bridge" notwithstanding, that the blame lies more on the side of the bridge builders than the canal boat builders. Can't we all just agree to get along?

Considering that the canal was built, and by some notably amateur engineers, I think it's probably fair to say that the engineering problems take a back seat to politics and finance here. This was going to be a "Gathering the Bones" article because my suspicious mind couldn't let go of the coincidence that New York was led into the canal building era by a member of the Clinton political dynasty that first rose to prominence in the age of the Clinton Earls of Lincoln, which lineage provided New York with a royal governor from 1743 to 1753, and  later, in the person of the Governor's son, a British Revolutionary War general with a distinctly intriguing and perhaps deliberately-obscured maternal lineage.  Meanwhile, the American Clintons were rapidly rising from obscurity, beginning with the arrival of Dewitt Clinton's great-grandfather from, of course, Presbyterian parts of northern Ireland, where birth records were illegal(!)

Unfortunately, modern scholarship has caught up with my suspicious mind, with John Lee's 2010 biography of Governor George Clinton acknowledging that he was a distant relative of the then-Earl of Lincoln. It's in Wikipedia and everything! Since I've been rusticating for the week, as opposed to the library stacks, I can't tell you what Lee's connection is, but the timing would seem to suggest descent from either the fourth earl, Theophilus, or one of his two siblings who sailed to America in the Winthrop Fleet of 1630. There's a great deal that we do not know about the Clinton Barons and Earls and their family connections with early American settlement, but it's hard to turn the Erie Canal into an extension of that enterprise, and since my thunder is already well and truly stolen, there's not much to say about the politics of the inception of the Canal. I could check back in with the consequences of the Canal, where it plays its part in the rise of the Anti-Masonic Party and the Mormons, but that all seems a bit sketchy for today, and, anyway, something much more concrete has arisen.

So the issue here is finance. Funding is always an issue in megaprojects, and the comparison that drew my attention a long week ago was with the half-assed infrastructural support that doomed the East African Groundnuts Scheme.

Instead of building a proper railway and seaport to export the crop being grown in the East African Highlands, the originators of the scheme started out with a utopian scheme to automate the cultivation process and produce the crops, which were then expected, I assume, to more-or-less find their own way to the market. There's a lot to say here about the brain-rotting properties of both colonialism and technological optimism, but, again, it would be a bold reach when I finally arrive at my well-telegraphed point, which is that I was inspired by a reference to one of Dewitt Clinton's funding streams, a dedicated "salt tax."

Did you know that Syracuse, New York, is the Salt City? Beds of antediluvian salt, buried deep beneath the sedimentary deposit of the eroding Appalachians, salinise ground waters that once entered Onondaga Lake as a bitter spring, due to various mineral salts present in much lower concentrations than a very economically viable concentration of sodium chloride. Some typically colonialist literature establishes that the Onondaga treated it as taboo or some such and ignored the resource, which seems moronic even if we go with the old-time author who claims that the Iroquois didn't preserve food by salting. You don't need to extract salt to exploit salt flats, which will draw animals from the surrounding countryside! This in itself would explain the role of Onondaga Village as the capital of the Iroquois Confederacy.

In any case, the clean story is immediately refuted by the sources, which attest to the existence of a small salt extraction industry in late Iroquois times, providing salt for curing beaver pelts. And, of course, the Onondaga negotiated an annual render of 150 bushels of salt from the springs when they ceded Onondaga Lake, which is a lot of salt when you don't use it for anything. Also some more, they put a clause in the treaty specifically reserving the salt springs of Syracuse to the public use and benefit.

This state-owned pump house supplied highly saline water to privately owned evaporating beds in the Syracuse salt works, which then had to pay a tax and store their product in state-owned warehouses. It's a weird hybrid of public and private, but I'm going to weigh in very heavily on the side of "state owned." We don't know a great deal about the ancillary industries that would have sprung up around salt production, because the industry abandoned Syracuse at the turn of the Twentieth Century in favour of the salt mines further west in the Onondaga Formation, and very little more than the nickname survives to inspire the locals.

I did, however, learn from one that the corporate ownership behind the Solvay Process factory that might have precipitated the ruin of the local industry eventually descends to Honeywell. (Used to be a soda company, and now it does IT.) I also learned, as usual, that the American Solvay Process Company "invented" the Solvay Process, which I mention here to justify a "Patent Trolls" tag, even if most people sensibly say no such thing. At this point, I  think I might be beating a dead horse in the person of the "All those American patents prove that American society was uniquely innovative in the Nineteenth Century," but just to be sure, I will continue to slap the label on when justified. 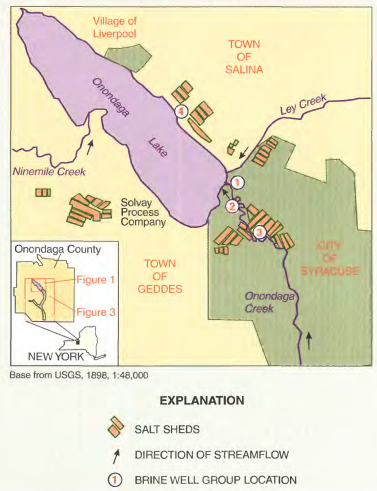 Nowadays, everything is vexed by both an ongoing land claims lawsuit, since the land was ceded to New York, in a land treaty with that state, which seems just a bit hinky, on account of being completely unconstitutional, and because Solvay-AlliedSignal-Honeywell is trying to wriggle off the hook for a Superfund cleanup of the old Solvay Process plant.

The salient point here is that the Clintons first pushed through the Onondaga land cession, then the canal, and used the canal to alter the local hydrology of the Syracuse era, expanding the possibilities of the salt industry, which they taxed to fund the canal itself, which, I assume considering that solar evaporation didn't really take off for another half century or so, brought the necessary fuel, presumably Ohio coal, to Syracuse.

There's more to be learned here. At this point, the thread most in need of being tugged free is the pelt treatment process.

To summarise, beaver pelts, especially dried, defleshed pelts, prepared for long distance transport from the Pays d'en Haut, are first relaxed in a soaking solution of Tide, ie, laundry detergent, then pickled in water, vinegar and salt,then neutralised with a baking soda (sodium carbonate) solution, then tanned with a commercial product in this video, which is presumably a mix of oil and ammonia.

That is a whole lot of traditional chemistry, repeatedly turning to the products of the salt spring, either for salt itself, or for the soda ash that is the basis for producing everything from soap to ammonia. Unless the Iroquois used alternative methods. . .

It presumably starts before the arrival of "European civlisation," but since it was the women doing it, we don't know, and we don't care, and therefore don't have to grapple with the strange notion of an Indian chemical industry at the hearthplace of the Haudesonee Confederacy. And whatever we make of the ethics of George Clinton in pushing the Onondaga out of their traditional lands, we can only celebrate the decision to do it for the benefit of the people and state of New York. The salt rises from the Earth. Why shouldn't it be a public enterprise?