In a spirit of pure academic inquiry, I am going to note here that I rode up Anarchist Summit Thursday morning with my bike badly out of whack for various reasons. It was in much the same condition on Monday when I summitted the Alison Pass on the Hope-Princeton less the last hill before Sunshine Valley. All of this is important research, and in no way humble bragging.


In the same spirit of data collection, a shout out to the Alpine Motel of Keremeos for having good internet and pretty much good everything considering that it is a family-run small motel, your only option in the other Windy City. Ramada Inns are also nice, although you'd expect that. At the price, any complaints I have about the Boundary Creek in Greenwood have to be set aside considering the effort the new owners are putting into it. It must be something to show up to do a painting contract and end up owning a motel, instead. On the other hand, one thumb down to the Adriatic in Osoyoos, which could have viable Internet at the price, but which is in a late stage of dissolution due to the decrepitude of the owners, and two down for the Manning Park Lodge, which hasn't a shadow of an excuse. 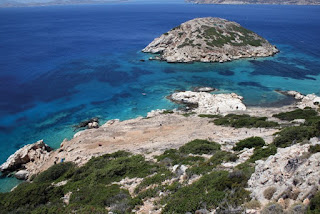 So Alex turns us up an Independent article on ongoing excavations at the islet of Dhaskalio in the Cyclades, which turns out to be a semi-retirement project for the indomitable Colin Renfrew. The Independent makes the point, not brought out in at least the extract of the World Archaeology article, that a monumental building phase at Dhaskalio, a so-called Greek pyramid, in fact rising tiers of marble buildings on a pyramid-shaped islet, occurred within a century of the Pyramids, Stonehenge, "first Mesopotamian kingdoms," and the cities of the Indus Valley Civilisation. I have reservations about the Mesopotamian angle and can't even begin with the IVC, but they do seem to buttress a case that checks out for Stonehenge, the Pyramids and Dhaskalio.


Since Renfrew has a monopoly on explanation/interpretation of the site, I'll start with Dhaskalio, whttps://www.world-archaeology.com/features/dhaskalio/here he adduces a two-stage history. In the first, about 2700BC, people began travelling to Dhaskalio's parent islet of Keros and depositing broken statuary and other durable artefacts at what was probably then an isthmus between Keros and Dhaskalio. Renfrew's account rests heavily on the presumed lack of everyday reason to travel to these barren islets, at which I bristle slightly. I assume that archaeozoology has ruled out a nesting area or a seal rookery, but would like that confirmed somewhere. Beginning slightly later, copper ore was brought to a windblasted beach on Dhaskalio for smelting, and about 2500 the political landscape of tiered marble buildings had emerged, while deposit activity at the isthmus tailed off and came to an end.

There are obvious parallels to the Stonehenge 3, II stage besides the Independent calling our attention to it. (If you'r wondering, I am absolutely begging off any attempt to delve into the Giza site. That's way too much work for the ninety minutes I have to kill before it is time to start getting ready for the road again.) Deposit activity doesn't come to an end, nor does building begin in 3, II; but the scale of the latter is immensely increased.

Synchronicity across vast distances speaks to something more than coincidence, and, of course, the Stone Age/Bronze Age has been an important transition between eras for as long as we've had eras. I know that it is fashionable to denounce it as an artefact, but it is such an enduring explanatory mechanism that I am inclined to promote it to the status of Something That Actually Happened. Maybe that's just the prejudice of the historian of technology, but I think I have more than insulated myself from accusations of androcentric focus by singling out the role of jewelry, detergents, textiles,. You know. Girl stuff.

So let's specific some kind of techno-cultural transformation that's sweeping the planet. (Wool textiles, I say.) Where do we go from here? Well, to the eve-of-Brexit anxiety that is sweeping the new field of genetic archaeology, with a "population replacement" model of social and cultural change taking hold of efforts to explain the British scene. 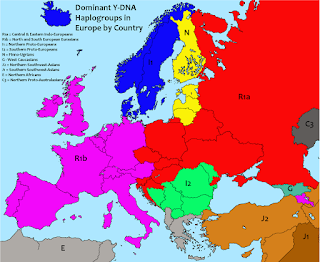 The dominant picture of Europe's genetic history (Y-group) is that everyone looks more-or-less like their neighbours, and the Scandinavians look a bit inbred. 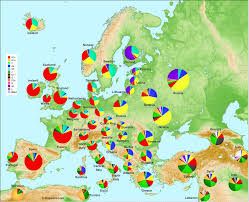 More detail only refines that.  However, if you look at the scanty remains of ancient Britons (and, to be fair, we have a lot of them. It's not like basing the "Ancient North Eurasian" ancestry that can be traced from Ireland to South America, and, so far as I know, Chad as well, on a single boy who died near Lake Baikal 24,000 years ago.) it turns out that some kind of population replacement, to include genocide perpetuated by trans-Channel foreigners, occurred in Britain at both the beginning of the Neolithic and of the Bronze Age.

For the purposes of this post, that means that incoming "Beaker" people arrived, exterminated (not really; the share of Neolithic ancestry rises over time, indicating that a population survived and intermixed gradually, but don't tell Nigel! [pdf]), took over Stonehenge, and promptly dressed the place up a bit --in a way that seems pretty respectful of existing henge and cursus traditions. From tumuli to roundabouts, the Brits seem to love their circles. If that's not weird enough, the cattle barbecued at the adjacent work/party site of Durrington Wells includes a significant number of animals --pigs as well as cattle-- from the Scottish Highlands.

Skepticism about long distance trade and transhumant pastoralism aside, this is pretty striking evidence of the power of cult to unite the island of Britain, and of the ability of incomers to assimilate into and improve upon existing cultural practices.

Ain't no politics round here any more than there's tourism promotion. Try the steak next time you're in the Thyme And Plate in Grand Forks, B.C.

Email ThisBlogThis!Share to TwitterShare to FacebookShare to Pinterest
Labels: Blue Plate Specials, Bronze Age Collapse, Holidays, It's All About Me, Ultimate Secret