That's the spirit. Now for something whitebread. CBC Radio's old time stable of local Can-Con did a Christmas album together!

Christmas is a time for being nostalgic and remembering old-timey things. The problem here is that British Columbia is such a young province, that, apart from some generic big-band music, I'm digging into the Nineties here. Does that even count for nostalgia yet? If it does, Canada's Metal Queen  has some seasonal stuff. "Peace on Earth," And, yes, Michael Buble has a Christmas album, because of course he does. I'd honestly rather a tribute to the ancient concrete barn to which I will say goodbye on 16 January:

A Youtube search for a "Vancouver Christmas" does turn up something. It's tongue-in-cheek, but it is this year's Christmas in Vancouver.

Speaking of old-time British Columbia, here's the picture I've been pushing down the page with gratuitous video inserts so that I can post it in its glorious original size. 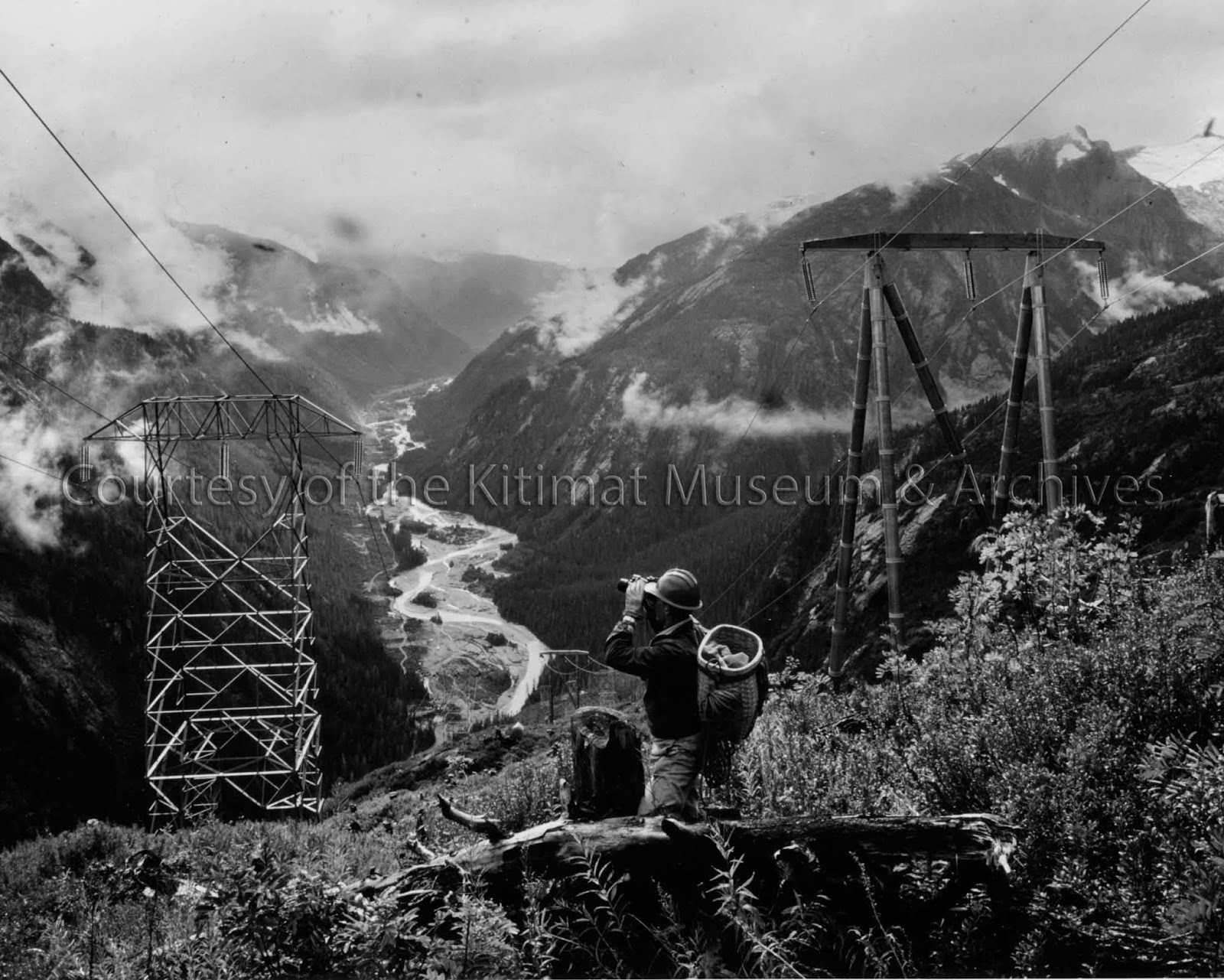 This is the Kemano high-voltage ("high-tension") line. It runs from Kemano Powe House 75 kilometers to the Alcan plant in Kitimat, British Columbia.  Kemano generates 890 MW from eight turbines that receive water from the twenty-six and a half million acre foot Nechako Reservoir on the high upper reaches of the Fraser River. The water is diverted through a 16km tunnel carved through  the Coastal Range, falling 800m from the heights of the Interior Plateau to sea level. Built from 1951 to 1954 by the province and Alcan, working together, because the provincial government could not be persuaded that such a project was feasible in such a small and remote province, the power lines are less interesting than most other aspects of the project. Nevertheless, the twin 300kV lines carried fully 35% of the power generated in the province in 1956. (And a super-imposed telephone voice channel, if you remember that bit of mid-century technology from earlier installments.)

Kemano I would not have been built without Alcan. There was no point in generating electricity so far from a major market. It would also not have been built for a plant at Kitimat much earlier than it was. Even a 75 mile high voltage (tension) line would have been too much. Nowadays, the Kemano project is controversial because Alcan would like to go through with Phase II, which is controversial both because of environmental reasons and because Alcan is suspected of wanting to shut the aluminum smelter down and selling all the power into the continental grid.

That's where this digression gets me to Engineering this month, and a vague awareness that we are getting an opening-night ticket to the Ferrite Age.


But, first, I want to go all in on the nostalgia angle. 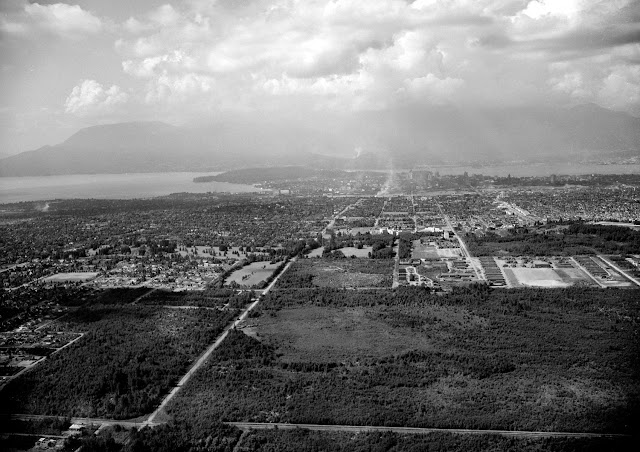 This is an aerial shot of Vancouver looking north. with the corner of Oak and 45th on the lower left. The forested wilderness in the foreground looks a but different these days: 1959, as it says 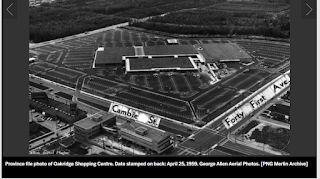 The picture is a reverse angle from above the parking lot in the middle right, and while much of the Oakridge Mall has yet to be built, the left third of it is my workplace, give or take various renovations. It was all built in quite a hurry to accommodate a rapidly growing Vancouver, which is why we have three leaks through the ceiling and counting. It's definitely a sign of problems when the rainwater is coming in through the reinforced concrete deck of a rooftop car park! In terms of what comes after, I guess we'll see how much juice the ferrite age has left.


Ferrite is a ceramic material consisting of mixes of metallic oxides made from Iron (III) oxide, Fe2O3, also known as rust. Iron is an unusual element, and has not only multiple oxides, but multiple polymorphs within them. Thus, the various ceramics made from barium, manganese, nickel and zinc have a variety of electromagnetic characteristics. They are all insulators, and ferrimagnetic, but it is their resistance to demagnetisation (coercivity) that is of most interest. High coercivity ferrites can be made into permanent magnets, while low-coercivity "soft" ferrites are readily magnetised and demagnetised. This is the more important property in the early exploitation of ferrites. As Dr. Brailsford in F. Brailsford, "Magnetic Material for Electrical Power Plants," Engineering, 16 September 1949, 293--4: 294, this low coercivity makes them ideal for the magnetic cores of inductors, transformers and antennae, meaning that transformers made from them can step current up and down for transmission on high tension lines with much less hysteresis loss than the conventional transformers of 1949. 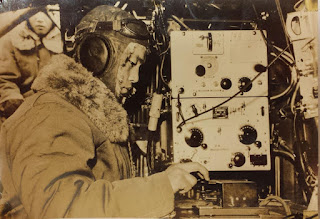 Before I go on to the corporate history, I am trying to give this as human a touch as I can, but Google is not cooperating. Professor Brailsford taught in the University College of London's electrical engineering  faculty for a very long time (publications from 1938 to 1970), but managed to go without a faculty biography, or even a Christian name, unless it was "F."

Fittingly, perhaps, Dr. Brailsford was also a bit weak on the history. It turns out that iron ferrites were first synthesised in 1930 by Yogoro Kato and Takeshi Takei, who went on to found TDK Corporation. which, per the company's Wikipedia history, then slept through WWII before waking up to mass produce magnetic tape in 1952, and compact cassette tapes from 1966.  The company's Code of Conduct page, of all things, notes that it produced 5 million radios containing ferrite cores in oscillators, mixers and transformers during WWII. [*]

The second article linked notes that Philips patented the ferrite core as soon as a Japanese military radio fell into their hands. This seems like dirty pool to me, but Philips didn't rest on its laurels, and Wikipedia notes specifically the first "hard" ferrite, barium hexaferrite, developed at Philips in 1950. The Wiki article is fascinating. Philips workers discovered it accidentally while preparing a sample of lanthanum ferrite to test its use as a semiconductor!

Meanwhile, a number of groups were looking at the hysteresis loop in some magnetic materials as a way of using transformers with hysteresis loops, which would automatically produce left- or right-hand currents depending on the direction of current to which they had last been exposed. This was seen as a way of getting a 'solid-state" switch, but in 1949, An Wang and Way-Dong Woo, working at the Harvard Computing Laboratory  used the phenomena to produce a memory element analogous to the delay lines and hydraulic tubes we've encountered around here before, coming up with write-after-read to address the way that hysteresis is reset by the next "switching." Wang was able to patent the idea, and opened Wang Laboratories to commercialise it in 1951. Other users contributed other features which made a magnetic-core memory possible in the MIT Whirlwind computer, ancestral to the SAGE air defence and SABRE air ticket reservation systems that are so prominent in the early history of computing.

On reread, that all seems a bit facile. You can follow up with the Wikipedia articles and see if you can disentangle all the overlapping claims yourself, but the salient takeaway is iron ferrites lead to magnetic cores which were used in some very consequential computers of the 1950s. And also magnetic tape! These are things of which I was only vaguely aware in the far distant days of earlier this week, when I started this post. Truly we are in the Ferrite Age!

Coming back to barium hexaferrite is the first high coercivity (that is, "hard") iron ferrite. Marketed as "Ferroxdure," it was widely used in permanent magnets in the 1950s until replaced by more complicated materials from 1980. This Philips-published manual is very high on the uses of Ferroxdure in magnetic motors because it can be used in relatively great thicknesses without manifesting significant adverse magnetic characteristics. Apart from motors, Ferroxdure-style material found early acceptance in the inductance coils and transformers used in, yes, long-distance high-voltage current transmission.

I might as well return to the Nechako-Kemano Project, since I have before me F. L. Lawton's "The Kemano-Kitimat Hydroelectric Power Development," in Journal of the Royal Society of Arts 101: 4912 (13 November 1953): 887--909. As Lawton points out, aluminum consumption is rising by 9% a year, and the Kitimat plant will draw on a Jamaica bauxite mine and flourspar from Newfoundland. The plant will require thousands of workers "with necessary homes, schools, churches, recreatinal facilities and all the needs of a modern, well-balanced community." Music in the ears of empire-builders like Boss Johnson and W. A. C. Bennett! As for Engineering, the glad news was that half the 300kV cable order, one of the initial step-up transformer banks and one of the generators from the initial order were to be bought in the United Kingdom. Alcan is "buying as much as possible from the United Kingdom."

Also, notwithstanding being completely irrelevant to this post, I can't help noting that Lawton defends the use of penstocks inserted into the tunnels, and an underground powerhouse, because they are not "vulnerable to enemy action." (Russians aside, sounds like Kemano would be a great place to hide from Skynet!)

Underground powerhouses aside, there's something more than a little remarkable about this. Lawton talks about building a town of 50,000 from scratch at Kitimat, a theme taken up by Maclean's, which has put it all online at its archives, apparently without a paywall: 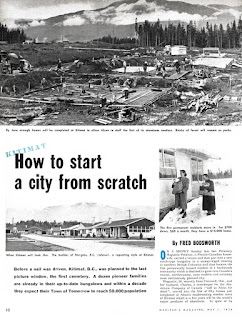 I feel guilty now. Kitimat is a city of 8100 today, not 50,000, but 8000 is still more than nothing, and while Google searching around, I found a US Congressman pontificating about how a similar project in Alaska was dubious because the power would have to be given away. He goes on to point out that a development at Churchill Falls has been stalled because no-one wants to use the power it will generate at a townsite like Kitimat.

We in British Columbia are luckier than we know. It might be that our timing was just right to reap this particular reward of the Ferrite Age. It remains to be seen whether we can keep it, or whether the plant will succumb to the temptation to transmit the power even further --to run server farms, no doubt. Not ones operating magnetic cores, but still part of the Ferrite Age.

Anyone who finds Dr. Brailsford's vitae online is welcome to comment. I promise not to be ashamed that my Google search skills have been shown up again! Other than that, I think I've covered off a proper Technological Appendix, so I'm off to see Star Wars IX: Rise of Meh at the Fifth Avenue.

Email ThisBlogThis!Share to TwitterShare to FacebookShare to Pinterest
Labels: Blog Comment Follow-Up, History of Science, Holidays, It's All About Me, Technical Appendix