So. Oscars night. I'm pretty much a third-person spectator, since I haven't seen any of the nominated movies. I was prepared in advance for a travesty, as 1917 beat Parasite for Best Picture. Needless to say, it didn't happen that way, but the argument for 1917 in advance --that it was British/-- rang a little bit off when I was simultaneously reading the wall-to-wall coverage of the Rank Organisation's disastrous 1949. The dolorous refrain of "the government has no place in business" resonates to the Newsweek reader, at least, with its marquee economic educator/analyst carrying on a rotomontade on the gold standard. We'll get a tiny taste of Henry Hazlitt's ongoing goldbuggery  next week, but it won't really do his literally months-long freak out justice.

The common theme here, which gets to food and turbojets to round out the post, is that, after 70 years, this stuff hasn't aged very well. Perhaps and this is just me spitballing here, maybe, just maybe, government does have a place in the boardrooms of the nation? 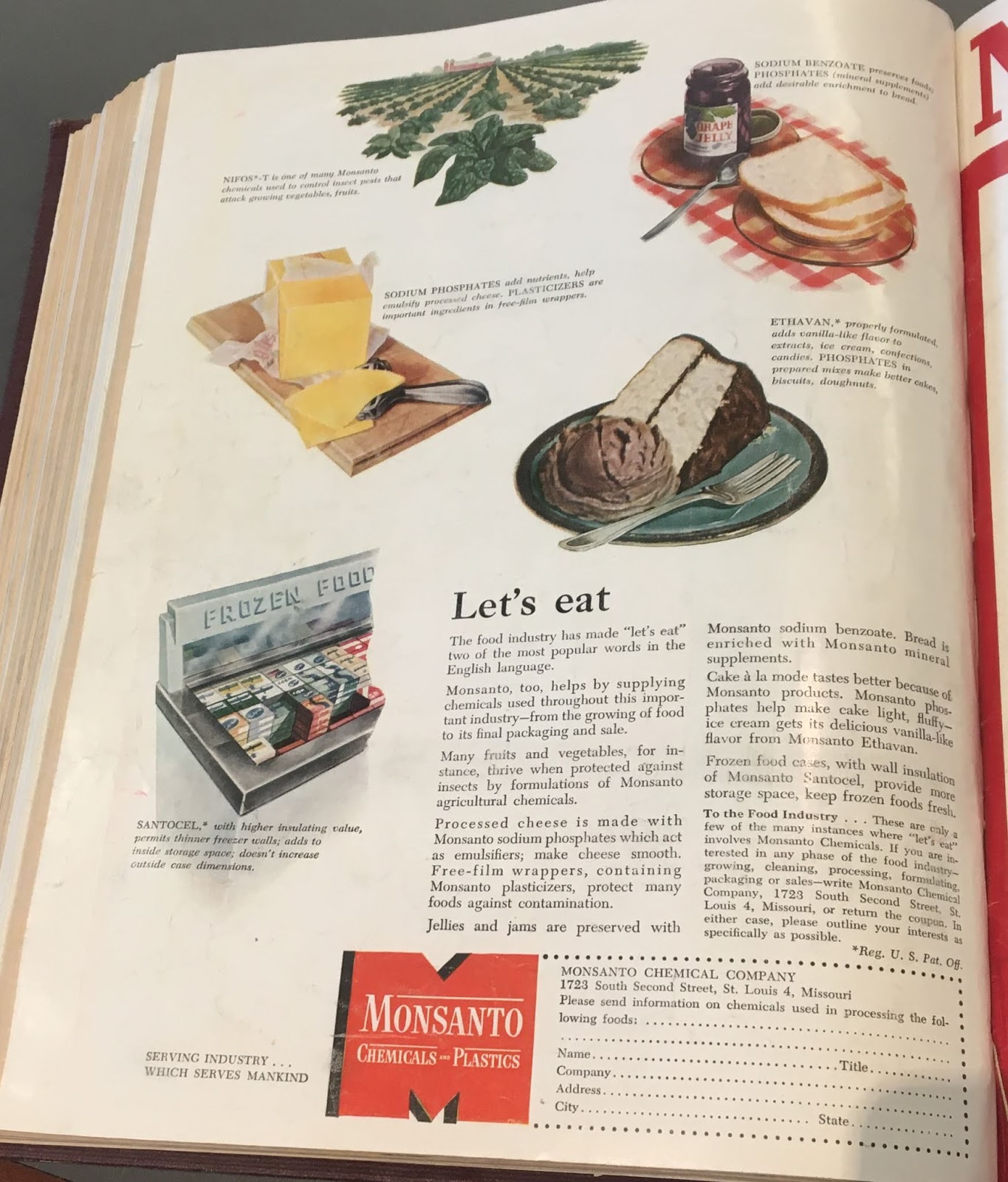 Pesticides! Emulsifiers! Sodium benzoate! "Ethavan!" Talk about better living through chemistry. My point, such as it is, isn't that people in 1949 hadn't yet decided that they didn't like "chemicals" in their food. It's that The Economist hits the agriculture beat at the back end of November,but the Monsanto ad is much easier on the eye than this: 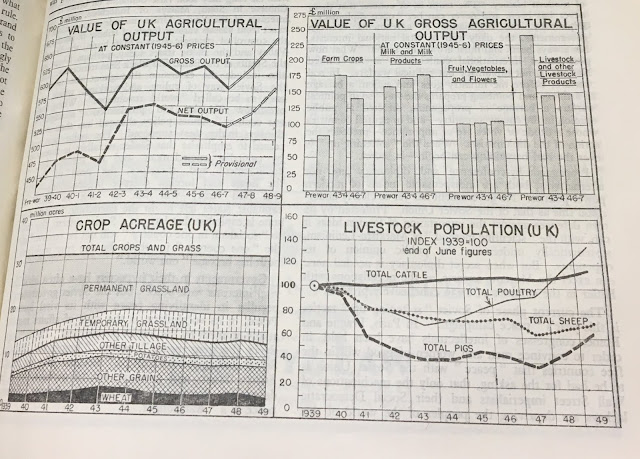 Britain's wartime agricultural accomplishment has had its day in the last few years as an example of what planning and social solidarity can do. It is less well known that between the war and Britain's adherence to the EU's Common Agricultural Policy in 1973, that wartime success continued and was extended. The Economist being The Economist, the substance of the article is mostly waxing gloomily about the failure of the livestock sector to recover, accompanied by clarion calls for continued animal feed imports. Given America's latest bumper crop, and the likely cost of American price caps, one can also see an argument to trans-Atlantic solidarity here. If America is going to keep on growing so much in the way of small grains, the least the British consumer can do is blow through the exiguous calorie count of 1947 and stuff his or her pie hole with domestically produced bacon, ham and a good old English roast beef.

It's a great deal less taken with British grain production, but that's going up too, roughly tripling between 1945 and 2011. Given the sheer number of stories in the aviation press about helicopter crop spraying, we can be sure that a large part of that story is also better living through chemistry, but that's just a technological way of saying that more capital inputs means more calorie outputs.

Of course, what's really got to frost The Economist's chops is, that up to this point, Corn Law Repeal is dead. It may gleefully anticipate rationing-sick housewives turning Labour out of office, but it is mainly lukewarm about the Tories because they seem reluctant to turn away from policies like not-paying-for-massive-imports-of-American-small-grains-by-cutting-wages. As it happens, in America's desperation to export as much agricultural product as possible, the big country across the pond has given up what little leverage it has over markets that choose to restrict agricultural imports. 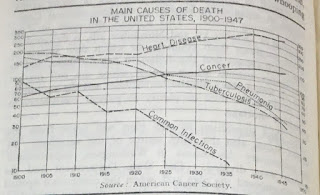 So what is going on in America? Buried in last week's postblogging (trust me, I don't expect you to pick it up!) is a  mention of the lastest Census Bureau revision of American population numbers. Americans are now expected to number 150 millions in 1950, up from 137 millions in 1940. That's a pretty swingeing increase. The American side of The Economist is usually less blitheringly stupid than the British, but in this case the discussion starts out spectacularly, asserting that this is not due to "a change in the birthrate (which has been declining, except for wartime exuberance, since 1900," or to immigration, which is true, but also set to change, but due to longer lifespan. This isn't wrong, but the view from 1949, which sees the trend going all the way back to 1900, contradicts the common notion that it's all down to the miracles of modern science. The spectacular decline in deaths due to common infections certainly accelerates with the coming of the sulfa drugs, but seems to reflect either hard-to-pinpoint improvements in public health, or else a generally more robust population. 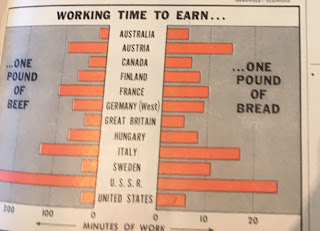 Speaking of which, while The Economist wasn't doing its Big Mac survey to cut through the cruft of international exchange rates, productivity measures and standards of living to figure out how people were doing, Newsweek has a primitive ancestor up in time for American Thanksgiving.

Americans --and Britons!-- are getting, I'm going to suggest, more food to eat. And whiskey, too! 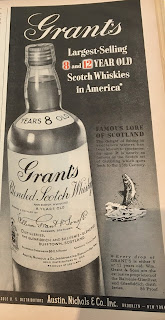 Someone, in the retrospective discussions of Whiskey Galore, characterised its whiskey-positive narrative as some kind of bolt from the blue. That, is not exactly the case. Whiskey is on the upswing in 1949, anyway. The same cannot be said for the Rank Organisation, which announced a disastrous financial year in November, driven by an attempt to meet the British government's 45% domestic quota while maintaining showing rates in pursuit of the wartime peak. The Economist predictably predicts that this can't go on, with the usual dire implication that, while Britons cannot make movies, they also cannot do without imported American movies, and that therefore the whole country is doomed to run out of USD and starve to death in order to keep on watching Hollywood cinemactresses fall out of their dresses. (But enough about next week!)

Whiskey Galore's worldwide $651,000 box office isn't exactly going to change that by itself, but it's also not precisely an isolated incident. Ealing Studios pushed out two other Britcoms in 1949, (Passport to Plimlico and Kind Hearts and Coronets) both well-regarded by critics in retrospect and well-suited to fill out the playbill at any American repertoire theatre interested in doing an "Ealing comedy" event. It will also prepare the way for The Lavender Hill Mob and The Man in the White Suit. More interestingly, it turns out that it is precisely the Rank Organisation's push for volume that was key to Whiskey Galore's success, as sheer lack of space at the London studio drove the movie out to be filmed on site. While that meant that production costs blew up, the picturesque Hebrides setting and the mix of professional amateurs and locals was an important part of the movie's formula for success, as it would be for subsequent movies in the same tradition from Local Hero to The Full Monty.

There's some kind of moral about "government waste," I'm sure.

And then there's the fuck-ups. I took a picture of the T-40 as part of a very hopeful Newsweek article about it being just about out of the woods, mainly because of the lead article in this early December science section, "Robot Psychoanalyst." That one is fun because it illustrates how it is never too early to start vapouring about AI, but a) the whole thing came out unfortunately blurry, and b) OneDrive seems to be having a problem this morning and I can't save my edits. The Allison T-40, the twin-T-38 turboprop, an almost spectacularly ineptly-designed early American product that I'm sure I've mentioned here before if only because of the 28 vacuum-tube Master Control Unit intended to ensure that all the reduction-gearing, pitch-changing and assorted other ghastly complexities worked according to specification.  The problems with pitch changing seems to have had more to do with a mis-designed gearbox than with vacuum tubes failing, but we can at leat thank the failure of the T-40 for the follow-on failure of the Super Savage, which probably saved the lives of a few naval aviators, if the benighted career of the Westland Wyvern is any indication.

The moral of the story is that if you want successful,. state-promoted turbojet engines, you have to start early and spend the money. I was going to expand on that with a discussion of Wellwood Beale's press junket on the theme of "America could so have jetliners if the government just gave me gobs of money," but it seems like this post has come to a natural end, and I need to get to work.