The Bishops' Sea: Who Is This "Henry" Guy, Again? 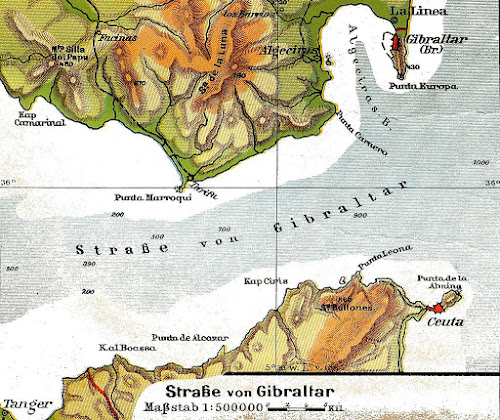 The anonymous author of the Wikipedia life of Marinid Sultan Abu al-Hasan Ali ibn Othman (1297--1351) seems to really like the way that this 1930 German textbook map contextualises the affairs of Ceuta and Gibraltar. Sultan Abu al-Hasan captured Gibraltar from Castile in 1319, and then tried to use it as the springboard for a more ambitious campaign against Tarifa, aiming to restore a Marinid Moroccan presence in Iberia, provoking an ambiguously enthusiastic response from the Nasrids of Granada and the last, successful defensive campaign of the Reconquista.
My question for this week is whether it actually contextualises this: 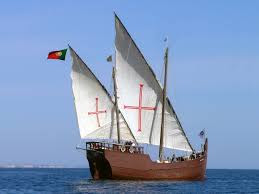 I'm not trying to ask a profound question here. The Boas Esperanca is no Kon Tiki or Olympias. It's a pretty good reconstruction of a well-known and historically important ship type. We may not know exactly what a Fifteenth Century caravel looked like, but this is fine and it's surely close enough for counting. There's really no significant questions about the vessel itself. But this is, occasionally, a blog about the history of technology, and one of the more important current set-piece arguments about the role of technology in history is that it was invented by one Prince Henry the Navigator.
"The caravel (Portuguese: caravela, IPA: [kɐɾɐˈvɛlɐ]) was a small, highly manoeuvrable sailing ship developed in the 15th century by the Portuguese to explore along the West African coast and into the Atlantic Ocean." Which is bullshit, in that it's just a big old fishing boat, but also pretty amazing considering that biographers of the Portuguese prince have been spending decades purging the public sphere of the idea of Prince Henry as a teacher and master of the arts of celestial navigation, teaching the sciences of the sea to a generation of young explorers at an ascetic academy on Point Sagres, opening up the world to European---
--So, yeah, anyway.  Point is, the moment that Nineteenth Century notion is thrown on the ash heap of history, it sneaks back in again through the back door, an obvious nod to a narrative of technological determinism in which you need the services of a great man to exogenously introduce the necessary technology to change all history.
Why not? It's how it works in Sid Meier's Civilisation! Navigation takes a ton of Science points, but the moment you have it, you can dump 600 gold into a caravel and, if you're lucky, have enough luxury goods flowing back to your ports to bring your empire back to positive happiness in a turn or three.
Some pushback, even if not dispositive, seems warranted. And you'll probably guess from my choice of two really, really bad reconstructions that I have an axe to grind, and that "pushback" is likely to turn out to be a hatchet job. Long time readers probably won't be surprised. Anyone else, I'm just being upfront. Though not so upfront that I can't do a driveby on the Trireme Trust!
Leopold von Ranke says that politics has pride of place. Political history may not trump history of technology, but it certainly rules the writing of history, and in the case of a Portuguese royal prince, as Henry was, politics have a better than usual claim to the spotlight. So it seems like a good idea to set the stage, even if one has the usual problem of finding a starting point.
For lack of anything better, I am going to go with Abu al-Hasan 'Ali (1331-1348), the last of the great Marinids and patron of Ibn Khaldun, conqueror of Gibraltar in 1333, and the loser at the Battle of Rio Salado, where he faced Alfonso XI of Castile, penultimate king of the Ivrean dynasty, Afonso IV, last but two of the Portuguese House of Burgundy,  with at least the moral support of Peter IV of Aragon, penultimate king of the House of Barcelona. You can tell from this that the later fourteenth century is going to be spicy, as the kids say.
But all that was for the future. Some sources suggest that Abu al-Hasan 'Ali's was concerned that he might be deposed by his son if he failed in his little adventure, but Morocco seems secure enough. It has been 33 years since Abu Yaqub Yusuf spent his reign firefighting around the periphery of a vast empire stretching from Algeria down to Mauritania and up into Spain. The sheer scope of Marinid strategic commitments might leave one wondering if Abu al-Hasan 'Ali might have been overreaching when he talked about being made "emperor" in Toledo, but it in the nature of conquest states to expand. And if, ultimately, he was able to maintain a large enough fleet in the Straits of Gibraltar to neutralise  the Portuguese, Aragonese and Castilians, and perhaps Boccanegran Genoa, perhaps the Marinid imperium was destined to implode as quickly as it expanded.
Though, if so, it was in a general Fourteenth Century competition to see who could implode first. A victorious Afonso IV returned to Portugal and was promptly embroiled in his son and heir's doomed affair with Ines de Castro, setting the scene in which the legacy of his grandson, the last Burgundian King of Portugal, Ferdinand, was set aside by his illegitimate grandson, John, Master of Aviz later John I. Meanwhile, the death of Alfonso XI left the  throne of Castile disputed between an illegitimate son, Henry of Trastamara (fourth of ten by Eleanor de Guzman), and Peter the Cruel, legitimate heir, who with an obvious PR problem, and also something of a trend setter, since Castile's turbulent politics would fail to throw up another long-lived and successful monarch until Isabel the Catholic.
Before that, though, there were "Fernandine Wars" to show that Portugal was going to have problems dealing with its more powerful neighbour, even when strong kings were pitted against weak. It was therefore something of a miracle for Portugal that John I, first king of the House of Braganza (1357--1433), was able to triumph over Castile in the civil war of 1383--5. 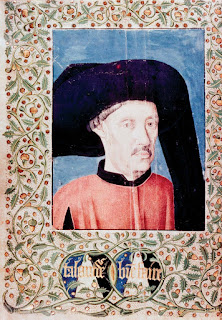