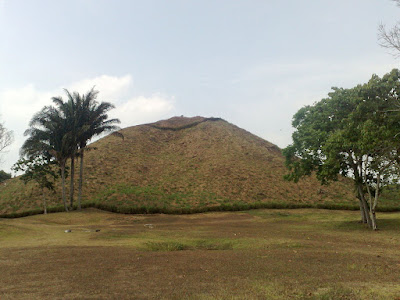 The Great Pyramid at La Venta is 2400 years old, give or take. The fact that it is a clay mound erected in a lacustrine setting makes it very much reminiscent of the much later Monk's Mound at Cahokia. Based on the archaeologically reconstructed building technique at Cahokia, Martin Byers links Monk's Mound to a springtime "World Renewal Ceremony" in which a gathered community celebrates the end of the spring freshette by carrying newly deposited river silt up to the top of the mound and plastering new layers each year. The archaeologist cannot tell whether this prehistoric activity is linked to the "Earth Diver" story. Having been properly skeptical about the role of the Earth Diver story in the Ohio-Mississippi Valley of the 1100s, we're left being all the more cautious about an epoch another thousand years distant and farther away. Nevertheless, the fact that the Olmecs built their pyramid in clay rather than in stone like their more immediate successors in the Mayan regions, Oaxaca and the Valley of Mexico is a standing invitation to speculation. Bombs away! 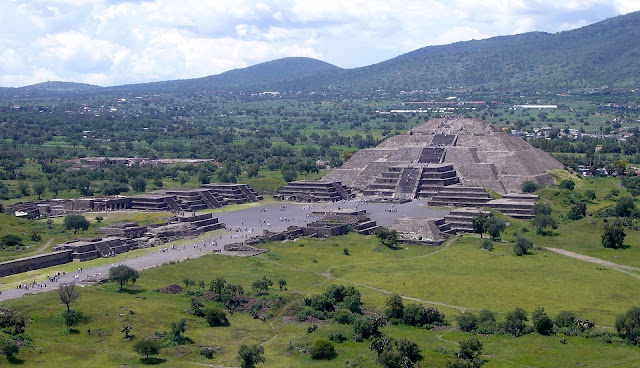 The La Venta pyramid was long thought to be an artificial mountain, but recent work (says Wikipedia) shows it to have been a regular rectangular pyramid with stepped sides and inset corners. Monk's Mound was built in a series of terraces rather than steps, so the major argument for seeing it as being inspired by Mesoamerican pyramids in general, as opposed to La Venta in particular, is its placement in the centre of a similar landscape of plazas and smaller structures, and various familiar uses of those plazas and structures (ritual games and caffeinated beverage consumption, mainly.) Here a more utilitarian argument is that the Olmecs, as the ancestors of all subsequent North American civilisation, were also the rudest, and so built in clay because monumental stone structures were beyond them. The Cahokians, whoever they were, were similarly marginal but in space rather than in time. The function of the pyramid remained the same, and so the intervening epoch of Mesoamerican stone pyramids simply reflects the greater wealth of the Classic-era civilisations of the tropics.
Maybe, but the Olmecs do present us with some special problems, especially if we do not question Greeks bearing gifts. By that I mean that the traditional narrative of the rise of urban civilisation draws on Old World experiences, and an insistence that New World trajectories to statehood are of similar antiquity and can be explained in the same way is seen as a bracing corrective against traditional, racist discourses. The rise of several Old World civilisations around grain agriculture in river valleys in semi-arid areas offers a master narrative that explains the surprising coincidence in time between Egyptian and Iraqi developments, and a more problematic key for understanding developments in Central China and in the Punjab. As Amazon summarises James Scott's latest, "all early states are based on millets and cereal grains and unfree labor." Because grain stores well, you see. 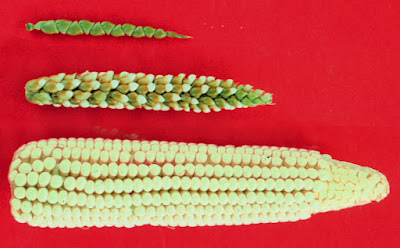 The story, as I am familiar with it from my youth, is that Zea mays was domesticated perhaps 7000BP in the Valley of Mexico as a domesticated hybrid of a wild grass called teosinte, but the history of the domestication of maize remains fraught with difficulties from the point of view of both archaeology and botanical studies. There is also a bit of a temporal gap between domestication and civilisation. 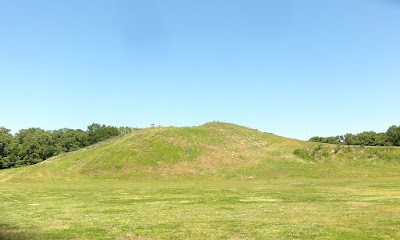 Reviewing the evidence, Robert M. Rosenswig of SUNY Albany concluded, in a monograph published in 2012, building on decades of failure to establish a clear history of North American civilisation with or against the grain, he looks somewhere else. Ironically enough given just how the Olmecs rose to prominence, as a result of California-bound travellers kicking around the Isthmus of Tehuantepec, he puts the Olmecs' position astride the main lines of communication in pride of place. In the Soconusco Plain behind the Gulf Coast and the Coast proper, controlling access to the Isthmus, some time between 3800 and 3000BP, a number of localties rose to prominence. In Rosenswig's reading, Mesoamerica is historic times would remain an archipelago of complexity in a sea of foraging societies, with long-distance exchange between the pelagic states(?) the source of that arcane knowledge/social legitimation/actually useful stuff.The Soconusco Lowlands in particular are ideal for this because they mediate stone from the highlands with the salt from the coast. Olmec big giant stone heads are the clearest possible statement of these community's ability to bring stone down from the mountains.
Importantly, early signs of settlement intensification and feasting activity correlating with long distance exchange clearly predate the widespread use of maize and the narrowing of faunal assemblages to deer and dogs. (Which we may take as indicative of a maize-based economy in which maize plantations draw deer to be harvested, and dogs act as secondary processors of undigestible maize byrproducts and how's that for coprophagic euphemism?) Feasting, settlements, ceramics and the state comes first; “agriculture,” including the management of deer resources, comes second. (170—2). Technological change (as manifested in changing ceramic assemblages that show increasing reliance on maize) coincides with social collapse at the  original Olmec centres and the development of secondary ones, in particular La Venta with its pyramid. As for the rise of the systematic exploitation of multi-earred maize corn varieties as a grain crop, this can be seen as following from Olmec exploitation of lacustrine resources. The common use of maize as a flood-retreat irrigated crop isn't expedient. It is the origin of maize agriculture.
Now let us take it back a bit. The traditional "against the grain" narrative sees a simultaneous origin of archaic, grain-based states in suitable ecologies the world around. It's human nature, you see. This requires a Western Hemisphere original sin, and the Olmecs are far too late for that. Enter northern Peru's Norte Chico civilisation, with the right timing and some of the right characteristics for an archaic state. (I'm not drawing reservations about agriculture, but rather a lack of ceramics, an underwhelming political landscape and, of course, the lack of writing.) Given that I've heard a lot about Norte Chico over the years, this post was inspired by actually looking at it and discovering a bit of an Archaeological Guilty Secret: No grain.
As Wikipedia puts it: "Research into Norte Chico continues, with many unsettled questions. Debate is ongoing over two related questions: the degree to which the flourishing of the Norte Chico was based on maritime food resources, and the exact relationship this implies between the coastal and inland sites." The inhabitants of Norte Chico ate a lot of fish and mollusks. They also gardened a variety of crops, but the evidence for maize corn consumption was scanty, and way back in 1973, Michael Moseley of the University of Florida concluded that complexity at Norte Chico was supported by marine resources, not grain agriculture. This, apparently, is so embarrassing that it still hasn't reached the wider public. Indeed, in a pattern that I am intimately familiar with from Aviation Week, not a breath of the problem was heard until a heroic pollen study provided scholarship with an argument to refute it, at which point it became a solved problem. 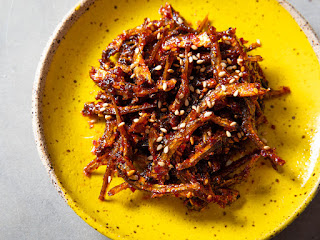 As Jacob Earnshaw of SFU, I think, now, points out, there would be nothing surprising about an early Peruvian society based on marine resources. The Peruvian coastal fishery is rich, and we already have a paradigm case of a Pacific American complex society based on marine resources, on the epi-contact Northwest Pacific coast. As for that heroic pollen count study, we cannot carbon date pollen, it gets into everything, and so the main argument that the maize pollen found in Norte Chico contexts, dates from that period is that the sites must have been sealed until post-Contact times, after which Mexican maize varietals with different pollen became prevalent.
I am unpersuaded. A civilisation feeding tens of thousands of people on corn maize for hundreds of years should surely leave more than a single deposit of cobs! (Clearly the Norte Chico civilisation did have maize corn and did consume it. But equally clearly they did not have multi-ear variants, and there is no reason to assume that it was used as anything but a green vegetable and source of sugar.)
The precocious date of the Norte Chico civilisation is certainly an obstacle to drawing a straight line to modern times, but at the same time, this is a functional argument about society's being shaped by their techniques of subsistence. This is not about ideas and images persevering. It's about the kinds of food we eat, and the landscapes from which we draw those foods. Andean civilisation quickly took its own course, but north of the Isthmus of Panama, we have an oecumene of pyramids and plazas, built on the wetland margins.
As Jared Diamond himself pointed out, there is simply no large region with a "Mediterranean climate" in the Americas in which a Mediterranean-style civilisation can start. The Americas are a pretty wet place in general. What they do have is vast lacustrine zones. In that, of course, they do not differ from the Old World, but they do lack is domesticated sheep to exploit the biotic productivity of the wetlands efficiently. Although I would be amenable to seeing the Western Hemisphere use of deer (and buffalo?) as something halfway between hunting and domestication --distant herding? Close hunting?. If the largest source of food is the lacustrine, and it is, and there are no sheep to go eat the roughage there for us, then we are going to have to exploit it in a different way, and fish and mollusks only carry us so far. 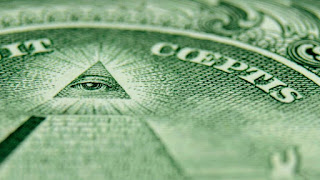 And this is why I connect La Venta and Cahokia: Flood retreat agriculture, world renewal ceremonies, and the world as pyramid/mound, and I ask how much of this carried over through the presumptive Columbia caesura?
At this point the crazed speculation seems to call insistently for some cracked symbology. You're welcome.

Email ThisBlogThis!Share to TwitterShare to FacebookShare to Pinterest
Labels: Cheese, Gathering the Bones, Nimrod, Plantation of the Pacific