Postblogging Technology, June 1951, II: In The Time of the Magnet 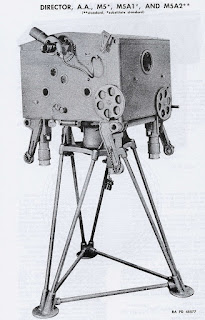 Magnets and electricity are funny things. The language of electromagnetism currently permeates our discourse. You think you know what you're talking about, and then, bam, it turns out that you don't. This is especially true of "amplifiers," which sound like blindingly obvious gadgets that give an extra oomph to an input current. There's all kinds of uses for a gadget that turns a small input into a large output. But that's not what they do at all, and it isn't until you understand what they actually do that you appreciate why conversations about historic amplifiers so often turn to logic gates.

Which turns out to be pretty important when everyone's talking about these new "computers" they have now. I have included a Kerrison Predictor, a very simple computing fire director, here because it contains a magslip element. Magslips are more often described as electric motors than as computing elements, probably because if we don't distinguish "control" from "computing" discussions about automation become impossible. Magslips also don't use the "one weird trick" that makes magnetic amplifiers possible. See? You think you know what's going on, and then the language betrays you!

Magnetic amplifiers turn up in Industry Observer in the 14 June 1951 issue of Aviation Week. "The armed services are studying the use of magnetic binary amplifiers 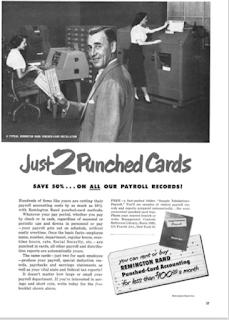 to replace vacuum tubes in digital computers, which will speed them up and reduce servicing." Wikipedia led me very quickly to the one application of the magnetic binary amplifier that seems to have engaged the enthusiasts, the Ferranti Orion, but it turns out that magnetic amplifiers were used to replace some or all vacuum tubes in contemporary computers as diverse as the ERA MAGSTEC, precursor Ferranti Sirius, Univac Solid State, and English Electric KDF9.

From there we can go back to the "magnetic amplifier" in general. Again, Wikipedia provides a useful account which boils down to exploiting magnetic saturation to create a binary on/off switch. A ferromagnetic piece will show a steady increase in magnetisation when exposed to magnetic fields of increasing strength. Any such material will experience a "saturation point" where increasing the strength of the magnetic field will no longer increase magnetisation, and in certain materials there is a practically instantaneous transition. Changing flux affects electric current, and vice versa, while static magnetic flux does not, therefore the on/off state can both be read, which is the basis of magnetic  memory, and used to manipulate the characteristics of an output alternating current so that it takes on the appearance of an input alternating current, only more powerful. (The "amplified" output current is not the same current as the input current. Confusing!) 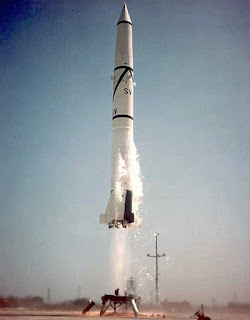 Magnetic amplifiers contain no moving parts, although of course neither do vacuum tubes, the real difference being no dangling filaments just waiting to be broken off by untoward shocks including, but not  limited to, G-forces and vibrations. This might be what is motivating whoever leaked this tidbit to Aviation Week, but the actual first binary magnetic amplifier computer was the ERA MAGSTEC, delivered in the wake of ERA's first commercial success, the ERA 1101, itself a commercialised version of ERA's latest codebreaking computer for the Navy, the Atlas II, not to be confused with the Ferranti, later ICT Atlas, which was followed by the ICT Titan II, at which point I can only conclude that the industry was intentionally messing with historians.

The blithely succinct Wikipedia article records that Drew Pearson took an unhealthy interest in ERA "at about this time," suggesting that a company staffed by former Navy codebreakers getting untendered Navy contracts and leveraging top-secret work into commercial projects was just a bit unethical. "About this time" would seem to cover the early summer of 1951, but I can't confirm the exact timing without a trip to the library, which is not on the schedule for today. In any case the MAGSTEC was not delivered until 1956, which while a reasonable timeframe for developing a new technology today, is far too long an interval for the rapidly developing Fifties. So maybe this leak was an attempt to get ahead of the Washington news cycle, and maybe it wasn't. 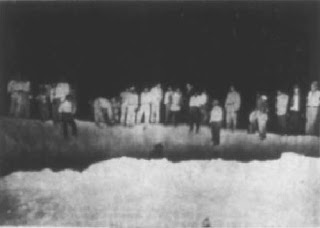 Taking a bit of a step back, the Navy, and presumably ERA, was interested in the magnetic amplifier because it had been widely used by the Germans in WWII, including in the V2, Americanised as the Redstone and put to highly satisfactory use randomly bombing northern Mexico, plus also upper atmosphere research. (That's what they all say!)

The slight Wikipedia artefact which is the link leading to the Orion rather than to magnetic amplifiers would appear to relate to the very large role the Orion played in the end of the Ferranti/University of Manchester partnership. Disgruntled by the division's poor performance, Ferranti sold it off to ICT, the British offspring of Hollerith/IBM. Ferranti then replaced the Orion 2 in its sales catalogue with the Ferranti-Packard FP-6000, kept it there long enough to sell six machines, and then sold the Ferranti-Packard division --to be fair, as part of the whole computer division package, as the Wiki article on Ferranti-Packard makes clear. Ferranti-Packard had only been kept going as a viable concern by a stream of orders related to the introduction of the postal code, and once the USPS introduced its own automated zip code readers, American movers could take advantage of economies of scale also leading to automated cheque readers. No wonder everyone says that the history of business computing machines is such a rich and interconnected study! 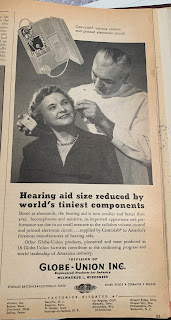 Ferranti, meanwhile, was not quite as obtuse as its exit from the business computing sector might suggest. Over in the defence electronics sector, the company was the main contractor for the guidance electronics of  BLUE ENVOY, the missile, which was lofted to high altitudes under line of sight guidance before switching over to self-guided radar homing. The resulting ARGUS system had to direct the control vanes of the BLUE ENVOY missile, and so had "a complete control feedback system," and also by implication there were some kind of logic-controlled amplifier motors in the system, albeit aboard the missile, and not on the ground at the ARGUS station. Ferranti developed ARGUS with an early generation of transistors, hitherto the elephant in the room for this discussion --it's not that transistors were unknown, it was that they were expensive and somewhat unreliable, being prone to blowing up at the least sign of a power surge. With money out of the way, MoD being made of money, you see, Ferranti had no problem offering an all-transistorised computer to it, even as its commercial side was developing the binary magnetic amplifier as a cost-efficient alternative that might have a better logic, with multiple inputs "voting" on the output, a system familiar to us from Apollo. One of the blog's regular advertisers, Mullard's, even provided the transistor, the OC71, originally developed for hearing aids.

Fortunately, ARGUS survived the cancellation of BLUE ENVOY in the fallout of the Sandys Report, and the first Argus (decapitalised because no longer an MoD project) was supplied to ICI to control its soda ash/ammonia plant at Fleetwood. Hurrah for soap! Meanwhile, ARGUS had a second wind with BLOODHOUND, a second generation SAM that defeated the ECM revolution wrought by the carcinotron. Subsequent generations of ARGUS begat subsequent generations of Argus, with the Argus 400 shifting from germanium to silicon transistors and achieving first delivery in 1966. From this perspective, ditching the commercial side, whether transistorised or clinging to the magnetic amplifier, makes sense. With a new technology and bright prospects, the industrial side could re-enter the commercial market as soon as a non-compete (capitalism!) agreement with ICT expired. That, of course, didn't happen, but it does not seem to have hurt Ferranti very much, which instead went bankrupt when it mistakenly bought an American subsidiary with no actual cash flow not coming in through the backdoor from the American security apparatus, a story that I assume the judge only bought because no-one was willing to come up with a better one. (See also, with a darkly hilarious Kaiser connection.)

So that's the sordid story of the magnetic amplifier as a computing element. From the Nazi V2 to some inside dealing at the Navy's codebreaking division to some feckless lads at the University of Manchester and on to oblivion because of a parent company that was happier making SAMs than in the trenches of commercial computer sales, and is no longer with us because, when the market fell out from under SAMs, it bought a company that claimed to be making money in the business through insider dealing to the world's last white supremacist regime, then working on becoming a nuclear missile-armed power. I know it's a cliche, but . . .