A Technological Appendix to Postblogging, July and August 1951: The Avon State

Way back in the 28 July number, The Economist wrung its hands, as The Economist was wont to do, over the aero-engine problem. This is a problem that, as far as I know, no-one else has ever heard of, but which is well worth another look, once extracted from my historicised postblogging voice and given the longer perspective that history of technology has denied it. It seems especially pressing when I am preparing to postblog September. We have a new month's worth of handwringing to deal with, this time over "the inflation state," Attlee calling the election, and the annual Farnborough show. I can't help but think that the last two are linked, that one reason The Economist is banging on about airplanes so much is that the Farnborough show has turned into a very exciting demonstration that the Attlee government is doing something right. It would, as usual, blow The Economist's cover to be too down on Farnborough and planes, in general, but one can get there by a short detour if the flesh is willing. 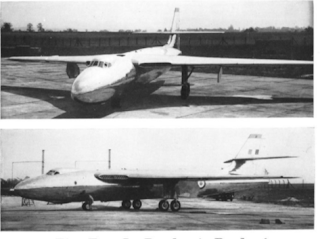 How many times has the Vickers Valiant already appeared in these pages? That's the thing with technological journalism. By the time that the thing appears as an actual thing (and that time is still not yet for the Valiant), it is boring old news after years of prefigurations, and only going to get more boring as it fades in the rearview mirror. It is good to go back to, yes, The Economist, and see that the actual impression that the Valiant made, flying at Farnborough, was so earthshaking that there was briefly talk that it would be licensed for American production. 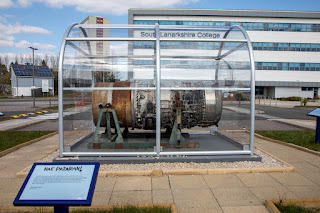 Like the Canberra/Martin B-57 before it, the Valiant was powered by Rolls-Royce Avon engines, four in this case. Although important inasmuch as it was half of the first generation of British service axial turbojet engines, and the more successful one. Eleven thousand Avons were manufactured through the end of Caravelle and Lightning service in 1974; and it is still in production and service as a generator set.  This is a healthy number. It falls far short of Merlin production, but "[e]ach of the newer engines requires roughly three times the machine tools and man-power needed for a piston engine." The aircraft component of the rearmament programme will require a "greatly increased" labour force from its current 158,000, although the exact number is unknown, and of this unknown number, about half will be in the engine plants. Orders were placed at Rolls-Royce in the summer of 1950, but factories are still being set up.

Peak Avon production will not be reached for another two years, at which time, besides the Valiant and Canberra, it will be going into the Supermarine Swift fighter and its as-yet unnamed Hawker rival, the Hunter, as well as the hopefully Atlantic-capable Comet II. Hunters took both the Avon and the Sapphire, so the almost 2000 Hunters built did not absorb quite as much of the total Avon production as the headline number suggests, but the Avon pictured above, was built in Glasgow in the early 1970s for a Chilean Air Force Hunter, although it never left Clydeside due to the Chilean junta's decision to use its jet fighter bombers to attack a number of targets in downtown Santiago during the coup. I wish I were still in the library this morning so I could read The Economist's response.

To return to 1951, The Economist is concerned that this grand scheme is impractical as a matter of manufacturing. "Production methods for British jet engines have so far consisted of adapting known machining techniques to finish rough components to the accuracy required in gas-turbine engineering . . . . Such techniques are quite suitable for limited commercial production where the scale of output does not justify the designing of special tools to carry one operation through from start to finish; but they may prove both clumsy and wasteful of tools and man-power when applied to quantity production."

The industry's anticipated bottleneck is labour. It hopes that some labour will be released by the curtailment of production in the exporting "metal-using industries," but isn't optimistic.  The real solution seems to lie in enlisting new manufacturers in areas with larger labour catchments, a point which The Economist will make when it eventually discovers a way to cover it dismissively, describing the workers of Coventry as "adaptable," and "machine minders." Which is at least better than admitting that Standard Motor Company built  415 Avons between 1951 and 1955, just down the hall from the Standard Eight, with no fuss or muss at all, perhaps for the best considering that Lord Tedder came aboard as chairman in 1954, something that might raise eyebrows in the cynical set.

The Economist is concerned with production technique. Unlike the centrifugal compressors used in de Havilland engines through the Ghost, which can be made on automatic profilers with about 150 hours of machining, the intermeshing rotating rows of blades used in axial compressors will require anywhere from 2500 to 2000 blades, probably of stainless steel alloys. (Rolls Royce is still using light alloys, but it does not seem that that will be practical much longer.) "An engine production line of 100 engines a month" will require about 200,000 blade, or a million a month when the full aircraft production programme is achieved, while in the United States, production "may rise to several millions a week." The blades have to have a complicated aerofoil shape and must be produced with "extreme accuracy." Light alloy blades can be die stamped at high speed, but the die sets are limited to 1500 to 1800 blades. Die-making is a time-consuming process requiring hours of  hand-filing in its final stages. Stainless steel blades being much harder, dies will only last for 300 blades, after one to two hours of machining after initial forging.

Some of this seems a bit precious. Apart from the idea of the United Kingdom producing 12,000 turbojets and turboprops, much less the United States producing more than 100,000 turbojet and turboprops, the argument is that, so far, the industry hasn't been able to design a machine for producing blades in quantity. "Wide use of one high-speed tool known to have been developed for machining the rough forgings is held up by the reluctance of the designer to part with it on the terms offered by the Ministry of Supply, but the same machines will be tried out in quantity production in the United States in the spring. . . . [we will then find out if this makes up for] the difficulty caused by the preference of engine designers for blade of this intractable material . . . . It is difficult in these circumstances to share the apparent optimism of the industry and the Ministry . . ."

The Economist goes on to explain how all of this industrial insouciance is being driven by the manufacturers' belief that, once they've settled the responsibility for providing all these blades on subcontractors, it is not their concern any more. This is folly, it is explained, because it does not solve the problem of providing alloy steel forgings and machine tools. It would appear that it was solved with something called "precision forging," although Springer won't let me read the article.  According to this here advertorial, it involves drop hammers and "CNC milling workstations," and this plant allows the company that is advertising itself to bid for blades for "thermal/nuclear steam turbines and forged compressor blades." So on the one hand, we have the development of numerically-controlled machine tools, so important to the development of computing and industrial productivity in this era, and the prospect of gaining access to a much wider range of mechanical engineering work with the new equipment. 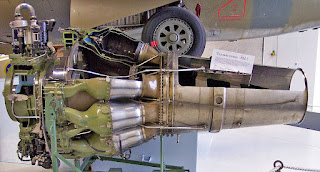 While I can't say I'm surprised to find The Economist being wrong, or that, a little later, it turns out to be a highly motivated piece of wrongness. "Some sections of the industry view with disquiet the abandonment of nearly all officially sponsored development work on centrifugal compressors, which are relatively simple to produce. Even if this decision proves to be correct on technical grounds."

Experts. What do they know? It appears that some guy at De Havilland has been talking to editorial. 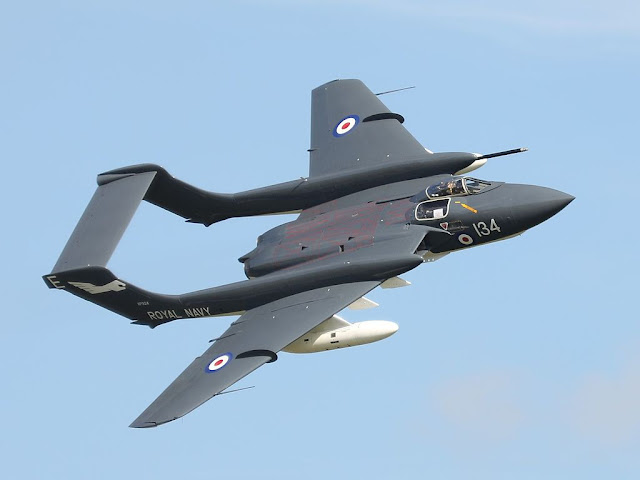 Directly, the argument is that Britain could have all the jet engines it needed, cheap, if it would just persist with centrifugal designs.  (The Economist, not to put its thumbs on the scale too obviously, suggests relaxing accuracy requirements, instead.) Corporate history has dropped any further development of the  Ghost down the memory hole, but there seems to be something going on with the company's transition from the Venom to the DH 110, which was tendered to the RAF's all-weather (night) fighter proposal, only to lose to the Gloster Javelin and be saved by a Fleet Air Arm order. The 110 was almost ready to fly with Avon engines at the time of writing, so at best this is an argument for putting a Ghost successor in a DH110 successor. Or perhaps the Comet II?

So that's your deep dive into precision forging of Avon compressor blades, which was supposed to create an all-pervasive, airminded state centred on the production of jet engines for warplanes, and turned out to equip a few toolrooms for the new age, of, as it turns out, runaway anthropogenic climate change due to ever more, and more responsive electrical power supply from thermal plants. One could wish for a bit more of a turn towards nuclear in these long past days, but one could wish for a great many things. Wouldn't the Severn Barrage be a nice thing to have been built way back in the Dirty Thirties right now? Oh, well. This isn't the time to be looking backward with regret. It's time to be sabotaging forward with enthusiasm!