If I had to make three arguments for using Newsweek for postblogging, they would be: i) It's in PARC, and the library can get at the stuff in PARC, even as it begins to buy replacement copies of course work resources trapped in the ASRS facility on account of the automated retrieval system being broken and, at least for the moment, impossible to fix; ii) it has very pretty pictures that are more clearly out of copyright than Time's; iii) and this is where I stretch a bit, it is precisely because it is a bad newspaper. I mean, we're already reading The Economist, and it is, casual brutality and inordinate ego aside, a good paper. Why not see how the other side lives? Read the lazy, second-rate pundits and marvel at the idiotic predictions and rake-stepping proclivities of its business, political, and even show business prophets?*

So when Washington Trends drops word that the Navy is working on two nuclear submarines, and not just one, the reader is not sure what to make of this. It could well be like "the South will be decisive in 1952," just another case of Tom Connally (probably), playing a befuddled Ray Moley like a violin.

Or it could be something solid. As it happens, there was another nuclear submarine project proceeding in parallel with Nautilus. You haven't heard of it because it was a bit of an embarrassment, but Seawolf definitely happened. 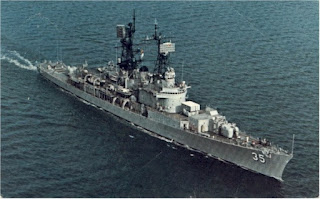 This is not SSN-575 Seawolf, but I've already shown you the Wikipedia picture of Seawolf, and I want to make a connection with the related DL-2, USS Mitscher, the second "destroyer leader" launched by the USN after the post-WWII hiatus in destroyer building. Laid down in 1949, commissioned in 1953, and scrapped in 1980, Mitscher mainly has an ambitious, superheated steam machinery installation in common with Seawolf. Considering that SSN-575 was the second US nuclear submarine and the first and only American submarine with a liquid-metal (sodium) cooled reactor, the superheat installation might seem like the wrong thing to focus on, but it was the most problematic part of Seawolf's plant in the short time between its March, 1957 commissioning and its its 12/12/58--30/09/60 refit.
Seawolf was a blip in a a very successful production programme which continued without a hitch to, ironically enough, the second Seawolf, which turned into "the second most expensive nuclear submarine ever," after a French boondoggle, and led to a construction pause before the less expensive Virginias were substituted for the remaining Seawolfs on the ways. Mitscher, on the other hand, was another straggler in a Fifties construction programme that culminated in a fifteen year gap in design activity between the 1957 Charles F. Adams class and the 1972 Spruances. I invite the reader to meditate on the Wikipedia characteristics box of the broad-beamed Leanders and that of poor Chas. Adams, struggling to achieve the same legend range (albeit with a swingeing top speed of 33kt) on a 20% larger complement and twice the horsepower. The USN has struggled to maintain a viable escort mix since WWII for what I have to assume at this point are structural reasons, but the construction hiatus between 1957 and 1972 certainly didn't help. Not to beat a dead horse or anything, but the very high superheat and pressure chosen in these 1950s-era ship classes dues not seem well-advised in retrospect.
It is a reflection on the state of history of technology historiography that the story of high pressure steam in modern navies is told by two complementary books, Harold Gardiner Bowen's 1954 Ships, Machinery and Mossback, which presents the American programme as an unalloyed success, and Louis LeBailly's 1990 A Man Around the Engine, which presents the British response as reactionary and inadequate; whereas 1954 was the midpoint in the unfortunate American experiment with 1200 degree, 1000psi plants, while LeBailly could look back on the extraordinary production, service, and export success of the Leanders.
All that said, more than once around here, SSN-575 was not really another product of Harold Bowen's NRL superheat shop. Marine liquid-metal reactors, and, even more so sodium-cooled ones, are fairly natural candidates for superheat installations, as the primary coolant is just so hot. Sodium boils at 883 degrees Celsius (1621 Fahrenheit). A separate superheat installation makes an abstract amount of sense, and Rickover's preferred pressurised-water reactor was already pumping hot water around ship under high pressure. I'm just not sure that the problems of installing one aboard a submarine were fully taken on board. The Wikipedia account of Seawolf's early propulsion trials led me to the official history, which is fortunately available online for download. Hewlett and Duncan provide useful background to the GE programme at Knolls/West Milton, which was proceeding separately from Rickover's programme. Technologically more complex than Rickover and Westinghouse's project at Shippingport, its success would further undermine Rickover's position with the President after his recent failure to beat Calder Hall into commercial power production in spite of a prodigious outlay of resources. (In fact, the prototype West Milton sodium-cooled plant was hooked up to the grid before Shippingport.)
The problem with Nautilus was that it was sold as a high-speed attack submarine, but  was slow, and all but unarmed. Rickover and Westinghouse's preferred S1W plant would evolve through multiple iterations, the S5W giving 15,000hp, sufficient to drive  Thresher (1958) at 33 knots, albeit with an even lighter torpedo loadout than Nautilus. On the other hand, compared with Nautilus, which vibrated too  much to even use sonar above 5kts, Thresher was a genuinely silent, as well as fast class. The performance characteristics of Seawolf's S2G plant appears to be deeply uninteresting, but I eventually found it buried here, at 78 MW, comparable to the S5W and 10% greater than Nautilus' 70 MW S2W installation.
This is the quote from Hewlett and Duncan that appears in Wikipedia:

Although makeshift repairs permitted the Seawolf to complete her initial sea trials on reduced power in February 1957, Rickover had already decided to abandon the sodium-cooled reactor. Early in November 1956, he informed the Commission that he would take steps toward replacing the reactor in Seawolf with a water-cooled plant similar to that in the Nautilus. The leaks in the Seawolf steam plant were an important factor in the decision but even more persuasive were the inherent limitations in sodium-cooled systems. In Rickover's words they were "expensive to build, complex to operate, susceptible to prolonged shutdown as a result of even minor malfunctions, and difficult and time-consuming to repair."[4]

The odd truncation already appears in Wikipedia's source. It turns out that the "makeshift repairs" were inspired by the discovery of mercury in the moderator sodium, followed by the superheaters. The machinery had been built as a triple-vessel system with an intermediary space filled with mercury precisely to serve as a diagnostic of leaks between water and sodium leading to a potential catastrophic oxidation event. Leaks in the superheater and then in the S1G steam generator were fixed. Further leaking into the superheaters due to stress corrosion in the system during a full-power  trial led to the "makeshift repair" cited above, which consisted of bypassing the superheaters. Seawolf went to sea at reduced power, and Rickover proceeded to make over the West Milton lab as a pressurised-water joint, more-or-less taking it out of current work on Navy reactors well into the Sixties.
Liquid sodium plants would go on to have a mixed history on land. The Atomics International(!) division of the Rocketdyne(!) subsidiary of North American Aviation worked on one at its Santa Susana Field Laboratory with the general intention of developing a nuclear reactor for space use(!) and had an unfortunate series of radiation-release boo-boos that you really shouldn't have that close to LA. On the other hand, the UK Atomic Energy Authority ran its Dounreay Fast Reactor mostly successfully for many years, and sodium and lead-moderated reactors have gone to sea with the Russian Navy without (mostly) blowing anything up. although perhaps also without a compelling use case. as the Russians reverted to pressurised water reactors in the follow-on classes,  much to the regret of us science fiction fans, although not necessarily anyone else.
I will tentatively normalise the industrial use of liquid sodium by pointing out that sodium-cooled piston valves were the absolute go-to of mid-century aero-engines, but that was just a tiny dollop of liquid metal, and no-one is, or was, pretending that mid-century aeroplanes weren't conflagrations waiting to happen.  The same cannot be said for great dollops of liquid metal sloshing around a live reactor core. Still, fun's fun, and it sure looks like the S2G was done in as much by Hyman Rickover covering his ass as by its intrinsic weaknesses. One briefly wonders, after seeing the chronology of the Shippingport fiasco laid out, how Hyman Rickover kept his head during the latter days of the Eisenhower Administration, and it is noteworthy that President Eisenhower made a point of taking a cruise on Seawolf on 26 September 1957.
So, in conclusion, Seawolf, and S2G, are kind of like Betty Grable in that it lost its studio contract due to contractions in the business and the actual and expected future volatility of a key liquid component; but it is not impossible to blame an  upstart successor. Is that the first time that USS Thresher has been compared with Marilyn Monroe? They both suffered from fatal depressive episodes!
I'll see myself out.
____
*-"We're doing a remake of Uncle Tom's Cabin."
-"Okay!"
--"It'll be  a musical."
--"People will love it!"
--"Starring Betty Grable."
--"She's perfect!"
This is, apparently, not a made-up conversation.