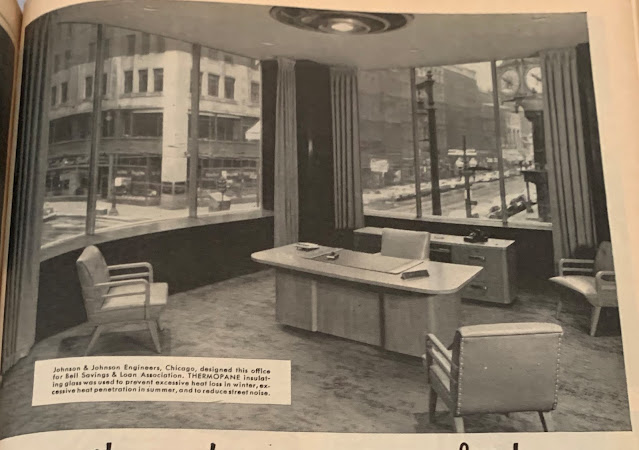 So I guess the story of the cubicle is that the Greatest Generation, Silents and early Boomers grew up and went to work in a paradise of grand corner offices; but by the time of the late Boomers/Gen X, a new business culture shoved everyone into cubicle farms where everyone has dwelled ever since. Dilbert premiered in 1989, so I guess it checks out. At some level. There's just not enough space to give everyone the Daylight Walls experience.

So, anyway, true story: The University of British Columbia's Automated Storage Retrieval System went into operation in 2005, and has been showing signs of wear and tear for years. At some point during the pandemic shutdown, it failed entirely, leaving the university's main library collection and its high-demand storage collection buried in a hole in the ground with no means of access. (Newsweek was sent to the low demand PARC storage facility when it was culled from the open shelves, which is why I still have access to it.)

All ASRS collections will continue to be inaccessible for the foreseeable future, and since there is still some residual demand for "books" in the educational process, UBC has begun rebuilding its undergraduate collection. 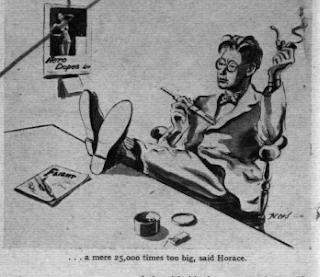 Unfortunately, all the library shelf space that was liberated by the ASRS has been repurposed for administrative offices.

Since the pandemic, and again with no end in sight, most university administrative personal have been working from home, and all of those offices are vacant.

I'm not going to try to draw a moral here, although I'm really tempted. 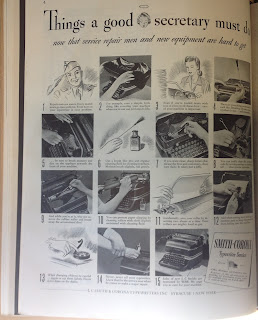 First, I should address the elephant in the room. (is there an elephant in the room? I can't tell. I'm middle aged and white!) There was never a time when everyone worked in a corner office. Most actual office workers of the 1950s were in "secretarial pools" and "drawing offices."

What we are talking about here is not the expectation of "most workers," but the status anxiety of people who think they deserve corner offices, and get cubicles, instead. I'm not going to point the finger. My generation has been all about getting promoted into a position that used to come with a corner office, and now comes with a cubicle, and for which there's never a really good explanation. It started with the end of laundry services at my college dorm the year before I enrolled, and it's been going on ever since. There's always a laundry privilege or a vacation week or a reduced tuition fee for the post-actual-classroom-instruction phase of the PhD to chip away for no very clear reason. 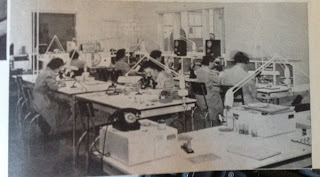 Fighting cubicles is okay, I'm saying, even if the "girls" in the drawing office would have killed for the privacy of a cubicle wall from the beginning. From that perspective, you can at least start from the position that cubicles are an improvement. Today's question is: When did they start becoming an improvement?

The "proto-cubicle" ad I mentioned two weeks ago is this one, from Great Lakes Steel: 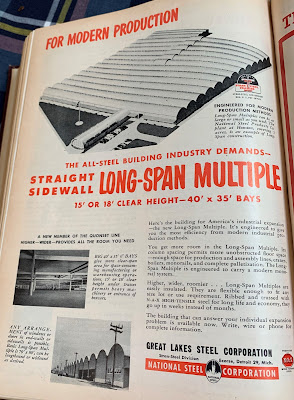 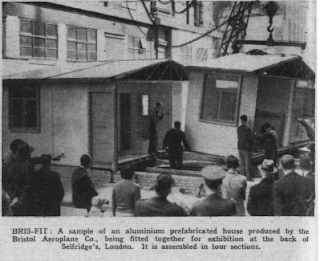 It's a bit of a stretch, as you can see. The Quonset hut originates in any number of earlier, First World War temporary steel structures. The Wikipedia article attributes the specific design to the George Fuller Company, which turns out to be a notoriously badly behaved firm within the American architectural community, while Great Lakes Steel was a  minor player in the American steel industry that was absorbed into US Steel and is today remembered for the prolonged death rattle of its Zug Island works, still a significant Detroit-area employer even with only 500 staff in a factory that once employed thousands. (Hopefully no cubicles there!) There was probably a connection between Great Lakes Steel and George Fuller back in the day, but good luck figuring out what it was. The point here is that Great Lakes is flogging steel structures to industry. It's a bit of a come-down from the high point of prefabricated houses only a few years before, but it keeps the lights on now that there are no more instant university residences to throw up.

Speaking of the Greatest Generation moving on from love to marriage to baby carriages, the University of Illinois at Champagne has you covered. 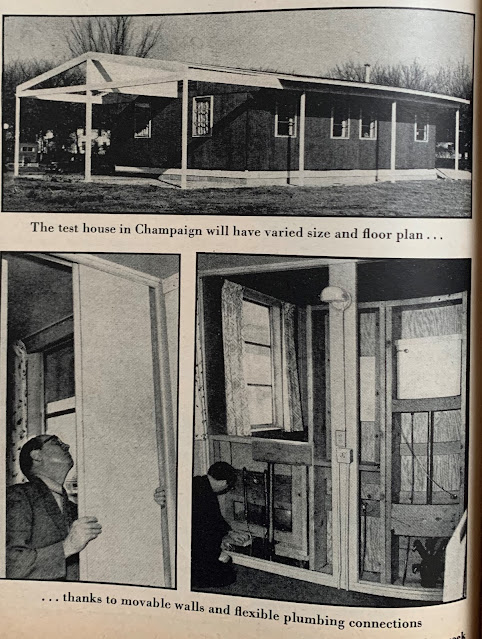 This "Space-use project," sponsored by the United States Government Housing and Home Finance Agency, is being managed by the university's Small Homes Council, and is an experiment in finding the ideal layout for a typical small frame house . . .newly built for a family of four." Unlike the capaciously Edwardian Warm Air House at Urbana, easily convertible from a dorm for twenty to a single-family home, this building has long since disappeared. Professor Rudard Jones, the head of the project, talks a bit about his  about it in the course of his interview for the university's oral history project, but it's an hour of an old guy talking about his undergrauate days that doesn't hit his faculty days until 1:03:40,  and then mainly to drop a comment that finally allowed me to track down the Building Research Council of the University of Illinois-Champagne, which evidently lacks a website, much lessf fripperies like a Wikipedia article.

So, the plan, way back in 1951, is to move the partitions and even fixtures around every few months and survey the residents about it. It all sounds very scientific, but the goal seems to have been to push back on the ongoing inflation of American home floorplans, and good luck with that! It is the movable partitions that set me down this path, and there's something charmingly retro to the fact that Newsweek feels the need to explain this ubiquitous feature of modern life. I think I've covered off the absence of discussion on the business side with the social observation. There are no cubicles in the office workspace because most members of the workforce aren't deemed to need even that much privacy. I regret now not looking up the "Cubicle" article on Wikipedia, which makes exactly this point as the central insight behind the Herman Miller Research Corporation's "Action Office II" of 1978.

There is some continuity in the blather about the Action Office and the Newsweek article, which makes me think that Rudard Jones and Herman Miller were drinking the same bathwater, assuming that it is their voices behind the two articles. I'm about as unconvinced of the value of movable partitions for proving that a family of four can be comfortable in a small rancher as for proving that throwing temporary half walls up in an open-plan office somehow increases creativity. It seems more likely that the rise of the cubicle has as much to do with downward mobility pushing middle class engineers down into spaces formerly occupied by secretarial machine operators; and that this is probably an issue for gender history. Women don't code, men don't secretary, so when the men kick the women off the "business machines," there's got to be something to indicate that they haven't lost status!

Email ThisBlogThis!Share to TwitterShare to FacebookShare to Pinterest
Labels: 194Q, History of Science, It's All About Me, Technical Appendix, Things of the Last Days