I Would Run Away to the Air: The British Economy, Montgolfier to 727, II 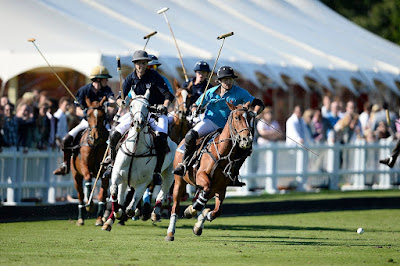 How about that sport history? Guys, and I do mean "guys," some of us, maybe most of us, are here for the cultural history, for which purposes we're more interested in dates than the areas of early polo grounds. 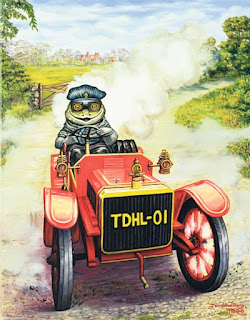 Anyway,  it turns out that Major General Joseph Ford Sherer (1829--1901) is the "father of modern polo," which I will take as proxy for a stronger claim about how polo as a social phenomena of the high Victorian period. There's a website associated with the Polo Hall of Fame, but I decline to explore it further, even though, I notice, it has a brief and actually pretty relevant discussion of the history of polo ponies;. My excuse is that equestrian history is even more inaccessible than sport history. In truth, I want to gesture at the evolution of the wealthy British male consumer's "need for speed" through various horse breeds strictly as a prologue to machines, and facts would just get in my way.

It turns out, and here I am just showing my lack of culture, and specifically the fact that I didn't read or have Wind in the Willows read to me, that Mr. Toad follows exactly this path. Beginning with a horse caravan (a Victorian fad I completely missed above), he moves on to his notorious automobile-born adventures. Finally, the questionable "Scouring of the Shire" conclusion in which the "Wild Wood" hoi polloi are expelled from the family seat. A perfectly understandable plot point in a child's novel, it becomes questionable when seen as a political allegory, and it might reflect the kind of anxieties which Joseph Chamberlain set out to embody. 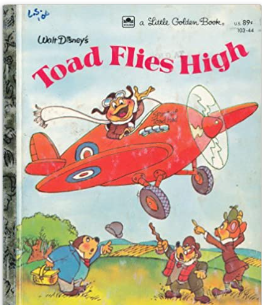 Kenneth Grahame would have written a much more useful book for my purposes had Mr. Toad escalated from row boat to yacht and through a bicycle to an aeroplane, but that's a bit much to ask of a book published in 1908. Plenty of people have carried Toad's adventures on into the air, and the Amazon entry opposite even credits Kenneth Grahame as author, but that seems to be some kind of automation error.
The early history of the bicycle is better known than the the history of polo. More people ride bicycles than play polo, early velocipedes are joyously absurd contraptions, and I am hardly the first person to note the roots of the more important automobile industry in bicycle production. I am not going to recapitulate the thirty year history of the bicycle before the 1888 "safety bicycle," but it is important to note the gestational role of the  Coventry Sewing Machine Company, incorporated in 1861, and which first produced velocipedes from a French original in 1868. Both William Hillman, of the Hillman marquee, first as an independent firm, and then as part of the Rootes and then Chrysler group; and James Starley, the patriarch of the family that founded Rover, were associated with Coventry Sewing.
The story, as I have it from various nostalgic British writers of the Thirties and Forties, and I may be recalling the egregious C. G. Grey here, take it for what it is worth, is that the bicycle market became oversaturated so quickly in the mid 1890s that market leaders had little choice but to move on from bicycles to motorcycles and cars. This was, very roughly, the age of Smile's Lives of the Engineers, a book firmly rooted in the equivalence of "engineer" and "civil engineer," in spite of the contradictions of the age. That is, he is  forced to straddle the gap between the heroic civil engineer, manager of large construction projects and builder of viaducts and bridges; and the artful designer of locomotives, on the other. It's not an easily bridged gap. Prince Eugene, that "noble knight," threw a bridge across the Danube river that carried ten thousand pieces and wagons across to take Belgrade for his Emperor. Siege management is very definitely something that both heroic generals and engineers do, and the identification between the two makes an uneasy room at the top of the social hierarchy for the military engineer, a class that includes Wolseley, Gordon and Kitchener, speaking of eminent Victorians. On the other, as a survivor of assorted splenetic old Economist editorials against the Amalgamated Society of Engineers, I can report with some confidence that the skilled hands that habituated the tool rooms of the nation were on the other side of a divide across which the likes of James Wilson enthusiastically waged class war. 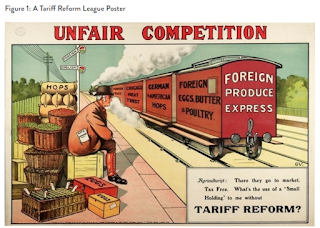 This might, however, be just a bit early for the bicycle story. Coventry Sewing Machines was, as I said, founded in 1861, nine years after Wilson delivered his opinion of the ASE's pioneering ban on overtime and piecework. It followed on the founding of the Singer Sewing Machine Company in the United States in 1851,  much as fellow pioneering bicycle builder, Birmingham Small Arms, was founded in the wake of the British adoption of  methods of mass production and interchangeability of parts associated with the Hartford Arsenal and other early Connecticut weapons makers. The fact that this technology can be traced back across the Atlantic to Revolutionary France doesn't really efface the American connection. Anxieties about the American contribution to the British engineering industry flourished in the last third of the Nineteenth Century, part of a more general concern with foreign imports that were supposed to be threatening the British economy. 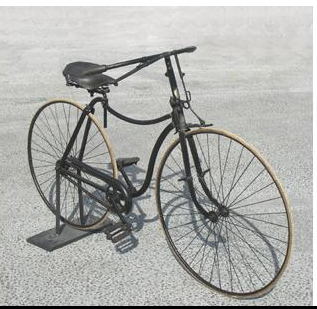 Here, though, it is interesting to look at Chamberlain's famous Birmingham stump speech during the 1903 election, and his list of threatened industries: "sugar is gone; silk has gone; iron is threatened; wool is threatened; cotton will go! How long are you going to stand it? At the present moment these industries...are like sheep in a field." None of the lost industries are  "workshop to the world" sorts of things, and all except iron and (to some extent) wool are re-export industries. What I'm saying here is that the panic, as I reconstruct it, is compatible with "Dutch Disease," and that the real problem is that the pound is trading too high. The less re-exporting an industry does, the better it will do in this regime, and that is actually pretty good news for the "high tech" industries.

Let's look at the safety bicycle, using an image I stole from the BBC, hopefully not too unethically, since I am now going to link to their "A History of the World" in objects page. Everyone thinks that the Rover Safety Bicycle is important! The BBC is all on about social mobility and safety and such-like humanitarian things, while I look at this structure of bent (unnecessarily!) steel tubes and that pneumatic tyre and see a revolution in the way things are done. A technological revolution! The best kind!

Steel tubes are surprisingly hard to make. the inside surface tends to get scratched up, and then you get rust from the inside out. Or they come apart at the seam. Riflemaking is a good entre to figureing out these tricks. Assuming that you've  got the art down, you don't have to make bicycles with them. You can sell your tubing in standard lengths, and all the customer has to do is put in the machinery to cut them to length cleanly and bend them smoothly. They're kind of like timber, in the sense that the yard sells it by the length to the woodworking shop.

Speaking of which, I've arrived at yachts before tire tubes. But since I want to get this post up before I catch my connection for Kamloops in half an hour, I'm not back tracking. Thomas Sopwith is moderately famous for the Sopwith Camel, and it isn't uncommon for successful businessmen to get into yachting in later life, and Sopwith comes to us down the usual path. An heir to a successful mine engineering fortune, he played around with motorcycles, cars, and hot air balloons before arriving at planes in the prewar, and I suppose in retrospect I would have done better to start with 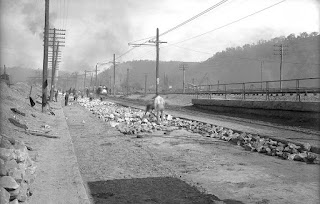 Hubert Scott-Paine. The point is that yachts, and specifically racing yachts with formed plywood hulls, are a more-or-less lost aspect of the "need for speed" era, due to their expense, but again derive from changes in industry as woodworking shops turn to novel (wood) materials and tools to produce cleaner and faster hullforms. And also pianos. Lots of pianos for middle-class music lessons and mass-market sheet sales, but I seem to have wondered into another Connections-style area of history, and will leave the rest of it to musicologists except for the observation that if you can make pianos out of the wood, you can make planes. Oh, and big, complicated woodworking saws!
Okay, finally, those tyres. They're more important than they seem! The received story is that the bicycle popularised the "paved," or, as they say in England, "sealed" road, helping to prepare the way for the automobile, and here I don't want to argue with the received wisdom, but to put a pin in it.
This very helpful diagram from a civil engineering educational site shows the construction method for a Macadam or Telford road, the trade distinction being in the size of the rocks. The basic concept remains the same, however. A pulverised layer of very small stones lies on top of a bed of increasingly large stones, giving a combination of good drainage and good traction. The concept is eons old, and the only reason it is named after some early Nineteenth Century British civil engineers is that they were the managers who did it systematically as they were firming up London's connections with the hinterland. It is a historical era close enough to the modern that you can trace the family dynasties of the engineers on through Nineteenth and Twentieth Century liberal politicians and developers to Margaret Macmillan, not that I'm bitter that she's famous and I'm not.
It's also a terrible system for pneumatic tires, which suction up the paving surface, letting water in, which quickly washes out the substructure. The distinction between North American "paved," and British "sealed" catches what is going on quite nicely, since asphalt was laid on top of already-paved roads in Britain, while the first paved roads in most parts of North America were asphalt-surfaced from when they were laid. No sealing, no cars, so let us all now pause to acknowledge the debt of gratitude we owe to those Victorian bicycle speed demons with their road-eating machines.
At this point, then, we've got shops, the raw material of construction, a social-technological revolution gathering steam, and, if it isn't obvious enough already, some young 1%ers with mad money to throw at someone who can help them go MOAR FASTER. So instead of moseying along to a little thing call the automobile age (I bet that's good for a few paragraps!), I'll hit the road for Kamloops.