The Early Iron Age Revival of the State, XXVI: Against Apocalypse

Earlier this week, when my work schedule looked quite different from the schedule that eventuated, I spent some time writing an answer to a question over on Quora. That question asked if the Late Bronze Age Collapse was an apocalypse.

As is often the case, I wrote to the question in response to an earlier answer by a popular and usually quite insightful Quoran with an inane theory about how the collapse was a salinisation event, as totalitarian Late Bronze Age elites forced the peasantry to over-irrigate the soil to the point where yields were ruined by soil salination.

My first response was along these lines:

There's a reason that old time Middle Eastern irrigated agriculture focussed on barley. Then it occurred to me that if people were seriously going to go to a substructural accouint of the Late Bronze Age Collapse, than an exposition of the sustructure of the Antique Middle Eastern economy was long overdue. It also occurred to me that another blast against our addiction to exogenous apocalypses was overdue. 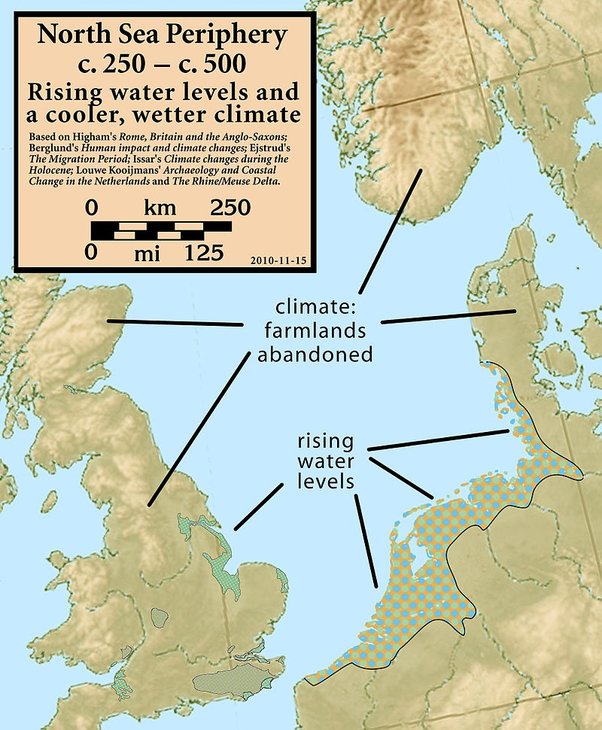 This would be a longer and more lucid anti-apocalyptic blast if I had not been at work at 4am this morning on a scheduled day off, but as it is, I can neither type nor spell[t], and this will have to do.

Let's call it an exercise in putting a marker down.

The last time I wanted to talk about this, the "Dunkirk Transgression" was a mystery beyond the ken of humanity. We now have a Wikipedia article about it. As far as I know, the idea that a series of maritime "transgressions" profoundly affected the sub-Roman period by. among other things, compelling the Anglo-Saxon migration, is still an obsolete apocalypse, which is the way that I deployed it over on Quora. "Look," says I, "Apocalypses come and go, like fashions." That being said, I want to acknowledge that the Transgression appears to be someone's life work (and that person is the source of the illustration above, via Wikipedia.) Louwe Kooljmans has been working on the ecology and archaeology of the North Sea Lowlands since he defended his PhD thesis in 1974, and it seems as though he remains taken by the thesis that an apocalyptic exogenous event in that area, perhaps related to "tidal bulges," had a profound impact on that enduring historical mystery, the fall of the Roman Empire.

The Transgression isn't completely irrelevant to this discussion. When I went looking for a treatment of the Laconian lowlands in the Late Bronze Age/Early Iron Age transition, I encountered one of those classic works of archaeology/classic history, Paul Cartledge's Sparta and Lakonia: A Regional History.  This is actually an interesting problem, in that the period of underutilisation extends longer in the Eurotas than elsewhere in Greece. If my thesis is correct, the absence of archaeological evidence of inhabitation in the lowlands of Lakonia in this period reflects populations moving uphill. Cartledge explains it with a thesis related to a hypothesised late Roman "erosional event" which presumably buried the crucial material. And, to be fair, the erosion event better explains the lack of archaeological evidence for activities in the basin before and after the Early Iron Age.

I am not the only person to question the Late Roman Flood/Silting Event. Horden and Purcell take aim at it in one of the short reviews they wrote when they were supposed to be working on Liquid Continents, which I do not imagine we're going to see in print. On the other hand, Horden and Purcell take a general anti-apocalyptic stance with which I sympathise, but which allows accusations of partiality. This (pro-erosion) article has a a very brief review of the literature going back to Ellsworth Huntington's 1911 historical geography of Palestine. It's always fun to read a Huntington arguing against contingency in history. (If we allowed contingency in history, we might be misled into thinking that luck played some part in human affairs!)

So, anyway, this is a particularly old apocalypse involving persistent concerns that other people are farming, or farmed wrong, and that there will be consequences. Or were. It's a bit confused. Anyway, eventually if we  keep on ploughing in straight lines or letting the salt creep in by growing too much wheat, we'll end up like those poor Martians, digging canals all the way from the Poles to the Equator. There's somewhere a serious book about these early Twentieth Century anxieties about erosion and deforestation, but I probably shouldn't be talking about it here, as in my current state I'll probably wander about talking about the Scopes Monkey Trial (relevant, I swear!) and the Imperial Forest Service.  (This looks interesting!)

On the contrary, the Early Iron Age is a good example of humans learning to farm (and herd) better. I know, I know, it's a very Whiggish, pro-Progress kind of story, but it's hard to see that it is wrong.