A Technological Appendix to Postblogging Technology, June 1952: And Colour Television!

Last week, it was hard to avoid giving the impression of being prematurely bored of SAGE. Even as the postblogging approaches SAGE from the front-end back in 1952, my attitude is shaped by Annals of the History of Computing 42, 1 (October 1983), the SAGE special issue of the already-unbelievably old flagship journal of computing history. SAGE had only been discontinued three years before the special issue, which, to put it in further perspective, came out in my second year of undergraduate. SAGE led to SABRE, the "Semi-Automatic Business Research Environment," which had only rolled out to travel agents seven years earlier. SAGE made its smooth transition from working technology to academic history for understandable reasons. It's like the Protestant Reformation or the Eighteenth Century London underworld: an inherently good "site" for historical work.
Having been somewhat personally bruised by the idea that the Ruthenian borderlands are a better "site" for historical work than, say the entire Austrian Empire, I am probably too willing to forgive myself for being cynical about overworked historical sites, but SAGE's claim here is hard to dismiss. Besides being a major customer and driver in the first decade of the computing industry, it pioneered many of the technologies behind the Internet, whose importance I will reluctantly acknowledge, and as the ongoing Ukrainian conflict underlines, national air warning and defence networks have a lot more staying power in the modern era than most utopian Fifties-era national security initiatives. Indeed, between the last Nagorno-Karabakh war and the repulsion of the initial Russian Special Military Operation, they would appear to be  right up there with aircraft, tanks, nuclear submarines and atom bombs in the list of things that international security cannot be without, a modern "queen of battle."
So, okay, yes. But SAGE is old hat, and boring. What about, I asked myself, the datalinks from telephone to computer? After all, analog lines are inherently noisy, and when you set out to conver analog input into digital data for processing, and then use the output data to create a graphical image for battle control, noise is a huge problem. The more data points to fit into your forced curve, the wilder the excursions which must be smoothed, to the point where the output data (the bomber track) might be nothing more than GIGO.

The importance of the telephone  network, which, at its peak, received everything from VHF from the DEW lines and UHF data  from AEW aircraft and forwarded it at 1200 baud on commercial toll lines, is underlined by the fact that the telephone switchboard stations, unlike the SAGE blockhouses, were underground and fortified. I did not find much about the telephone engineering of the network, however, and was quickly shoved in another direction. As with MIT redirecting its early work on WHIRLWIND to the SAGE project, so RCA sought a second life for its Selectron tube memory system in the nascent national defence computer engineering project. Ultimately, Jay Forrester passed on tube memory, whether RCA's or the more-developed Williams tube, in favour of magnetic core memory, and RCA "assigned their engineers to color television development, and put the Selectron in the hands of 'the mothers-in-law of two deserving employees (the Chairman of the Board and the President).'2]"
And this is kind of my objection to historical sites. (Silos?) We get locked into an academic historian's idea of what is important, and whole genealogies of advisors and students get bound up in them, and other subjects get missed entirely.  What's more historically important to our modern, Internet-enabled world, SAGE, or colour television? It's not, I submit, a question with an obvious answer.
Actually a pretty good summary at every level!)
The basic problem with colour television is that if you are firing three primary-colour  elements to give a colour image, you are using three times as much bandwidth as black-and-white, which is why early-Fifties talk about the future of television is crazy for UHF, in spite of its limited broadcast range and the possibility that all future discussion of the early history of television would be riffs on Weird Al.
(They couldn't get Schwarzenegger for the real show.)
The Wikipedia article has what reads to me like an awfully irenic discussion of the horrible battle between the rival CBS and RCA/NBC colour television systems that, like so much in immediate postwar American business history seems instead to call for a treatment like the one Richard White has given the Gilded Age railroads. In any case, either the National Production Authority or CBS pulled the brakes on its electromechanical system on 20 October 1951. Part of the problem was that the CBS-compatible sets were too expensive; but there was also an ongoing issue with compatibility. Clearly, the ideal colour television set would be able to pick up black and white broadcasts as well. Forward compatibility meant that televisions that worked with interim colour television broadcast technology would have to be able to work with a later technology that addressed the bandwidth, power consumption, and hardware cost issues that limited the interim technology.
Working together, the FCC and RCA/NBC developed the Compatible Colour system, which was encoded as the NTSC standard. While it all sounds an awful lot like socialism to me,  it kind of worked, and formed the basis of such colour television programming as was available to those who could afford to very conspicuously consume colour television in the United States of the Fifties and early Sixties, as assorted backwards regions like Europe and Canada made their slow way to the modern era of The Lucy Show in colour.
The Wikipedia articles are not exactly rich with technical detail, and, to be fair, the technical details of colour television are extremely boring, having to do with controlling beams and engineering luminant elements, with little in them of interest to the high science (and history of science) of computing. But the Selectron, like other storage tubes, was specifically a means of "storing memory" that relied on a CRT's property of being able to capture and hold a charge. In a television, this was means to the end of creating a visual image, and could not be allowed to persist beyond the physiological dwell time of the human visual processing system. In a memory storage tube, the charge needed to persist until it could be read, but the technical issue remained the same, since it was a matter of an incident beam energising a phosphorescent element. 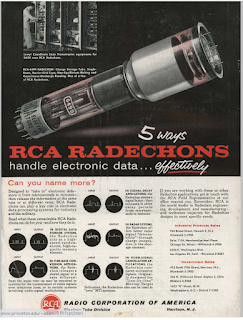 Phosphors will discharge their energy as a secondary electron emission rapidly if they are charged beyond a certain threshold. In visual systems, this secondary emission wipes the image. (Early radars used image persistence to subtract ground clutter, as in the Radechon tube.)  In a memory storage tube, it allows a second beam to "read" the data input by the first beam. This has the drawback of erasing the memory as it is read, and also leads to a steady decay of memory, which is why the Selectron was designed with a third, "holding" beam to continuously replenish the background field strength while replenishing memory was left to the read/write beam.
A minor  drawback of the Selectron tube was that it hardly ever actually existed, at least in the originally projected 4096 bit form, so it is understandable that management stepped in to redirect resources to the slightly more important colour television project, where all that engineering background in persuading electron beams to illuminate the right targets could be put to a slightly more commercially viable product. Unfortunately, no-one invites the engineers so redirected to computing history seminars, and we lose the thread a bit in comparison to loving reconstructions of dead-ends like the Selectron and its peers. Not to mention the overtaking of PAL by the Sony Trinitron and the end of the British television manufacturing industry.
Fortunately for history of science, there are still a few wild-eyed independent researchers working to discover the link between the deployment of colour television and the rise of Skynet. You're welcome!
Posted by Erik Lund at 12:32 PM