"The Majesty of the People Had Disappeared" 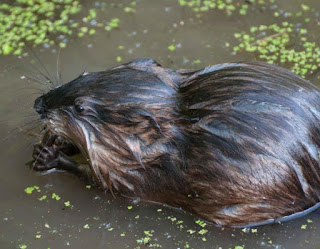 This is the Story of How Raven Brought the Sun to His People. According to a Haida story, in the beginning the world was in total darkness.        The Raven, who had existed from the beginning of time, was tired of groping about and bumping into things in the dark.        Eventually the Raven came upon the home of an old man who lived alone with his daughter. Through his slyness, the Raven learned that the old man had a great treasure. This was all the light in the universe, contained in a tiny box concealed within many boxes.        At once the Raven vowed to steal the light.        He thought and thought, and finally came up with a plan. He waited until the old man's daughter came to the river to gather water. Then the Raven changed himself into a single hemlock needle and dropped himself into the river, just as the girl was dipping her water-basket into the river.        As she drank from the basket, she swallowed the needle. It slipped and slithered down into her warm belly, where the Raven transformed himself again, this time into a tiny human. After sleeping and growing there for a very long time, at last the Raven emerged into the world once more, this time as a human infant.        Even though he had a rather strange appearance, the Raven's grandfather loved him. But the old man threatened dire punishment if he ever touched the precious treasure box. Nonetheless the Ravenchild begged and begged to be allowed to hold the light just for a moment.        In time the old man yielded, and lifted from the box a warm and glowing sphere, which he threw to his grandson.        As the light was moving toward him, the human child transformed into a gigantic black shadowy bird-form, wings spread ready for flight, and beak open in anticipation. As the beautiful ball of light reached him, the Raven captured it in his beak!        Moving his powerful wings, he burst through the smokehole in the roof of the house, and escaped into the darkness with his stolen treasure.        And that is how light came into the universe.

Moral: Raven is a lying, rapey asshole, but he brought us the Sun. By the way, if you follow the link above, you'll be taken to a fairly long and also bowdlerised version of the story of Raven and the First Men. In the uncensored version, he takes the first men and the first women and introduces them to sex; in the version above, he's more the guy from the band who keeps at the mike until the kids come off the walls and start dancing at the teen fling, but that's because the linked version is meant to be taught in Grade Six classes, which probably do not  need to hear about how the clam's foot is like a [*], and the chiton's lips are like a [*]. Shorter: Raven not only brought us the Sun, he made sure that there were further generations of Men.

Muskrats aren't ravens, and generally when people draw this kind of comparison, they probably don't include Muskrat, who has no surviving genre "Trickster" stories, unless you count The Deerslayer, which I do. Instead, eager to prove the sciency-scienceness of their field of Comparative Mythology, they go on a world tour with Anansi, Monkey, Rabbit, etc. The Trickster is a "universal myth", which is like a Universal Flood, only real.

You know what? Bullshit. I'm saying Muskrat can be a trickster, and that it is perfectly fair to compare Muskrat and Raven without universalising the story. This is just a story about tricky assholes. Anthropologists took more care to record stories about Raven than about Muskrat, but everyone tells stories about narcisssitic assholes. Villages have ambivalent relationships with narcissistic assholes. They're disruptive troublemakers, but, unlike assorted higher beings who will go nameless here (but I'm lookin' at you, Thunderbird) whose only interest is to hang out at the top of totem poles, Raven actually gets down with the people. Sure, he only does it because regular people admire his shiny feathers --but at least he needs us, which is more than you can say about the big guys way up there.

So I'm sliding from Raven's Raincoast people --pretty reliably Democratic voters, at least south of 49, to Muskrat's Old Northwest/New Rust Belt people, , who came out yesterday, when no-one else did.

People in small scale societies mythologise stories about difficult people. In larger scale societies, sometimes they elect them President. The mythological story explains why: Raven will go steal the Sun for us from the big guy, because, well, he needs our approval. Sure, he may need therapy more than praise; but we need the Sun, and we're not his parents.

In other words, this extended riff on mythology is intended to introduce a very simple Big Idea. Donald Trump is a Trickster figure, and he's a also a lot like Andrew Jackson.

Yes, yes, it's arguing from analogy, but, seriously, take a look at the "tariff of abominations." Trade was the issue, back then, too. (Please, however, do not look at the causes of the Civil War.)

By the way, if you're wondering whether it is fair to say that Muskrat's people are the same as Jackson's, the point is moot, because the Old Northwest was so lightly populated. There were 25 electoral college votes in the two Border States in 1828, 27 in the four-then organised states of the Old Northwest, fifteen of them in Ohio. Indiana and Illinois are still appendages of the Border States.

If you follow on the link to my long-past blog post on the election of 1828, you will see that I'm making heavy weather, once again, of the demographic argument. Specifically, I offer the argument, that the all-out pace of American population growth was noticeably slackening in the first decades of the Nineteeth Century, and then picked up again in the "Age of Jackson."

I continue to believe that, when we're talking about the 1820s, this has more to do with ethnogenesis of Native American populations as White, but that's very sensitive ground, as one might be led to say something awful about Indian Removal.

However, I am also going to guess that, way back then, this growth presumably also indicates a robust birth rate, that we can talk about how it was just beginning to fill up the Midwest, and that we can segue into the current emptying of the Midwest.

Why is this happening? Probably a lot of it has to do with people emigrating from counties where there are no jobs; and also immigrants not going there. But I'm also going to put this here: 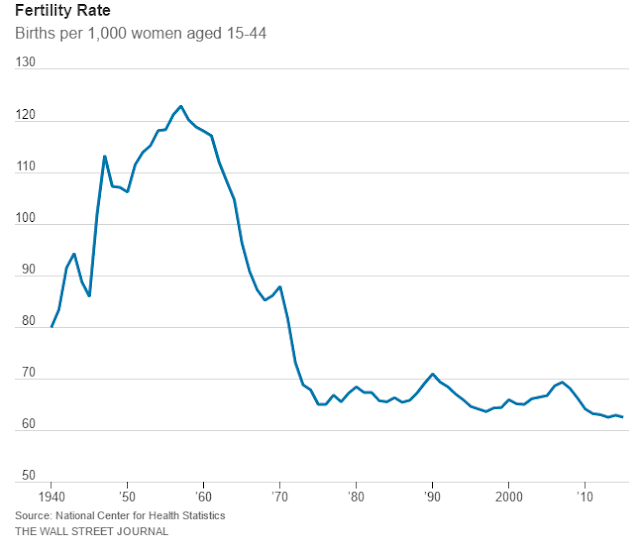 This chart was snipped, as the attribution shows, from the Wall Street Journal, and so I'm going to blame them for obscuring the key lede, which is that the birth rate unexpectedly declined year over year from 2014 to 2015, refuting the confident assumption that the strengthening economy would reverse a trend that began with the 2008 recession.

So what did voters want in 2016? They wanted the Sun, which is why they voted for the only guy to promise it to them.

Jeez, you'd think that this stuff wouldn't be that hard to figure out.

Email ThisBlogThis!Share to TwitterShare to FacebookShare to Pinterest
Labels: Gathering the Bones, Public Engagement, Things of the Last Days