A Technological Appendix to May 1948, II: Somewhat Germane(ium)

So this week we have news of two British computers, clearly described as such. This is pretty damn interesting! Hitherto, I've spent a lot of time emphasising the "prehistory" of computers. 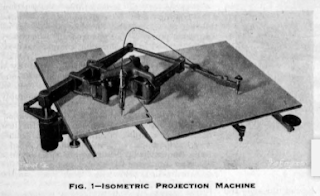 Look! An automatic computing device for engineers! It's like CAD before computers! However, today's first article, which is about the EDSAC, or Delay Storage Automatic Calculator, is clearly identified by The Engineer as being about an "electronic digital computing machine." Yes, we still have qualifications, but the transition from the human computer to the machine that old-time academic historians, immersed as they are in their Kuhnian framework of paradigm shifts, has been made.


EDSAC is moderately famous, at least amongst the crowd that likes to dwell on ancient British industrial glories instead of moving on into the bright future of financialisation.

Not so the second machine to make the news this week, the one made public by the Telecommunications Research Establishment. The TRE machine might be TREAC, the slightly obscure predecessor to RREAC. Or, given that the dates are a bit early, it might be MOSAIC, which was actually under construction by 1948.

Given that both TREAC and MOSAIC were directly inspired by COLOSSUS, the super top-secret code-breaking computers at Bletchley Park 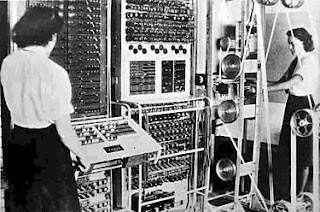 I'm a little surprised that either would be considered for public viewing, but since that's what TRE opening its doors to the public and showing off its computer means, I guess I'll have to defer to what is written down in black and white, and not to my prejudices. On the other hand again, hundreds, if not thousands of people were involved with COLOSSUS, which achieves a kind of weird secret-not-secret status with the 1966 publication of D. F. Jones' Colossus. (A super-top-secret computer is given control of the Free World's nuclear arsenal and [SPOILER] uses it to take over the world.)

Since no drafting machine or automatic car-frame factory has ever taken over the world, we've clearly moved into a new world here.

The Wikipedia article on Wilkes specifies that EDSAC was built to provide Cambridge with a computer, not to push the state of the art. The Engineer is not terribly interested in the computing part of it, but spends a great deal of  time on the memory device (and, yes, it calls it "memory"), which consists of pulses in mercury columns which are electronically sampled at one end and then fed back to the other end, causing a series of pulses in the column and an intermittent electric signal that can be picked off and used as a data input. It sounds like a bit of a Rube Goldberg device, although I could swear I read about something like it in an earlier issue of The Engineer, although my search-fu is failing me. Thanks to the other main branch of computer historian, the antiquarian, there's quite a nice Wikipedia article on delay memory, to which I can only add the obvious point that it is credited as being invented by computer pioneers J. Presper Eckert and John Mauchly before the article goes right on to note that it had already been invented by wartime radar researchers, although Eckert presumably deserves credit for refining "storage in an acoustic medium" into the specific details of the mercury delay line. Mercury was favoured because it matched the acoustic impedance of the quartz crystals used to convert the acoustic signal into an electrical one at either end. This aspect of the use of the piezoelectric properties of quartz very strongly suggests that we should also look to sonar research for the origins of this technology. However, unlike radar work, which was very difficult to keep secret when airliners kept flying into mountains, postwar ASW and anti-mine work is really secret, and I've never seen any particular insight into this.

Actually, the more I think of the mechanics of this Rube Goldberg contraption, which apparently ended up using powerful, shaped transducers to send shaped, ultrasonic pulses directly from one crystal to the other, so as to avoid tube-edge interference, and even provided corrections against changes in acoustic properties with temperature,  the more sure I am that the pioneers had access to sonar work. Who else was active solving these kinds of problems?

MOSAIC, if it is MOSAIC, is even more directly connected with radar and defence concerns. The most elaborate of pre-1954 British computers, it was also both defence-related and not in crying need of the kind of security that wrapped COLOUSSUS in enigma, as it was built to support radar processing at Malvern. Although designed by Alan Coombs, a man with COLOSSUS experience, who is not the same person, Google take note, as American conservative radio personality Alan Colmes.

Coombs and his team of GPO engineers were working on keeping Britain safe from Communist atomic bombers, and not doing their best to conceal just how good GCHQ was at breaking modern cipher systems. MOSAIC had 6000 thermionic valves and 2000 germanium diodes, but since it was only for cleaning clutter and other interference out of radio-frequency signal inputs, it is boring and the work I am citing is ready to move on to the Manchester Mark I after exhausting everything there is to be said about MOSAIC in a mere paragraph.  To be fair, the work in question is about Elliot Brothers' computing efforts, and the British fire-control-maker-and-soon-to-be-computer-pioneer did not have much to do with MOSAIC.

Also, to be unfair to me, I wanted to drag that bit in to make it clear that Elliot Brothers was moving out of naval fire control and into computing. I'm still a bit puzzled that I can't find a similar signature for Smith's Instruments, given that the SEP 1 autopilot is a far more sophisticated British computer than anything that Elliot Brothers has built (except to the extent that they were responsible for late iterations of the HACS high angle control/ blind fire system). Either way, look, see? Admiralty? Air Ministry? GPO? Public institutions! So getting back to MOSAIC, clearly under design from 1947, and entirely reliant on "germanium diodes." This is the point where I call back to various Radio News articles about semi-conductors, specifically selenium rather than gallium, being used in "rectifiers." The last time I did this I was able to track down the lab that developed and marketed the original selenium rectifier pretty easily, but I can't remember my starting point, and I would be remiss if I didn't share the standard format modern "history of the diode" with its weird lacunae, here.   The developing lab appears to have been Federal Telephone and Telegraph, founded at Palo Alto in 1907, so very much Silicon Valley prehistory, but by 1933 absorbed into the International Telephone and Telegraph conglomerate, and perhaps a conduit for German science and research.
As you'll see in the article, there was wideranging work with semi-conductor diodes in the rearmament period. "Crystal-controlled" radios are a prominent issue, but so are infrared detectors, at which researchers, including the Notorious Lord Cherwell, beavered away throughout the war in search of enough accuracy to see anything besides the Sun; and, of course, sonar, but that's Sekrit. Once war was well begun, and microwave radars had come in, the need for some kind of, to coin a phrase, "solid state" switching device for handling inputs was obvious. For example, the decluttering devices that used delayed line memories usually added a phase-inverted, time-delayed signals to each other: persistent "clutter" cancelled out, leaving an image free of land forms, at least. Applying this in practice to 9.2cm wavelength signals was asking a great deal of a "thermionic valve," and vastly more of the delayed line concept than it was capable of delivering.

So the idea of processing signals (at least by inverting and adding them), and, somehow, storing them, was very much in the air. That was very much what Bell Labs, and a parallel project at Purdue, were working on in the late war years. It was their development of an amplifier "circuit" that led to a generalised theory of semiconductors and the first transistor. (Unless they just stole a 1925 patent.) The discovery was publicly announced in June of 1948, so hopefully we'll hear more about it in the technical press in the next two postblogging installments.
Posted by Erik Lund at 11:26 AM