The Early Iron Age Revival of the State, 15 1/4: Wool And What Came Before


The earliest date at which I could expect to finish my next postblogging has receded towards next Tuesday in a gradual way, so I could say that I'm setting out to write a little jeu d'esprit (go France!) The truth is that it was not until Saturday morning, surrounded by my grandfather's books and preparing to climb a mountain on a family occasion, that I thought of something worthwhile to say: a quarter's worth of a legitimate installment in the Sacred Spring series, a very modest contribution to Getting Technology Right. This is a blog about restoring grass to its place at the centre of technological policy; a new horizon was opened up over at Brad Delong's the other day, and there is something to be said here about that. 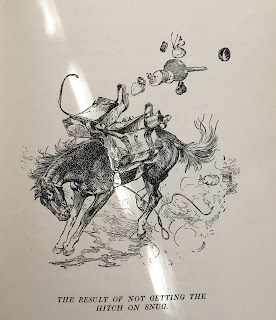 Ordinarily, I would be referencing my grandfather's copy of Kephart's Camping and Woodcraft, but I've already added it to my library at home, and can't read it here in Vernon. I  have instead Stewart Edward White's sillier Camp and Trail. "You will obtain a waistcoast, with plenty of pockets, which your womenfolk will extend for you." I know, I know, the 1910s were a different age, but come on, man.

This is about wool, plain and simple. Mountains get involved into it as an end to the means of wool, and only one. Wool lets humans living in cool climates to exploit mountains and to function deeper into winter. In that sense, it is a time machine, allowing our ancestors to use more of the year. Along the way, there are some aspects of the "Secondary Products Revolution" that leverage wool. For White, horses, mules and burros are inseparable from outdoor life, and I think it will be worth coming back to those "burros," the mountains, and textiles at the end of this post.

I'll start with setting the problem. The Stone-Bronze-Iron Age scheme has a certain utility for the technological historian, but often suggests that it's logic worked itself out in the real world. The Bronze Age might have come before the Iron Age by literally millennia, but the transition is marked in the archaeological record by at least some trends that persist to the Early Iron Age break. Cemeteries full of furnished, individual burials speak to an epoch of social stratification; bronze hoards to a "monetary problem," to be hopelessly anachronistic. A vogue for monumental "hierophanies" such as Stonehenge and the Pyramids might be stretched into some prehistoric anticipation of r>g by a caffeine-idled autodidact. Whatever. It is well worth grounding the problem.

What set the Bronze Age on its long  trajectory towards collapse and iron? In western, northern, and central Europe, and then back around through the Western Mediterranean as far as Sardinia, it was pretty clearly the "Beaker Complex," a period of unprecedented, Europe-wide contact, in which similar ritual artefacts were made and used across virtually the whole of the European Union. Nothing like it had happened before, and it would be a long time before it happened again.

Apart from signature artifacts --the eponymous beakers, wrist guards, arrow heads, and, most importantly for this post, spindles-- it has long been suspected that the "Beaker Complex" was carried by intrusive populations. The original insight occurred to physical anthropologists working from skull shapes, a now-unsavory branch of the human sciences associated with Nazi ideology. The extension t narratives of migration, conquest and the extermination of inferior races is as obvious as it is repulsive.

Er, sorry about that. I didn't mean to get personal! Obviously, if science ends us up with invasion and population replacement, that's where we are. Sure, one's patience with nightmare stories about migration, immigration and "population replacement" is at an all-time low. Sure, one worries about narratives of technological change that bring it sweeping in from elsewhere. But if that's what the science says, that is what you're stuck with. It's just that, maybe, there is another story about patriarchal men out on the land.

Let's face it. It is disquieting to see that as soon as the Nazi spectre was put to rest, we got chariot-riding, ax-wielding "pastoral barbarians" from the Pontic steppes. They even wear brooches, or clothespins, or, anyway, the personal pieces of bronze jewelry used to clasp overcloaks at the throat, and which we now associate with "barbarian" wear. Unfortunately, neither Mary Isaacs nor Mrs. Albin, to speak of "barbarians," need clasps at their throat. That is left to an ancient past, although not terribly ancient on the northwestern plains of 1922. A place where "population replacement" comes into focus as a pretty serious problem.

This migration/replacement/conquest story has come around again, thanks to mitochondrial and yDNA studies, to the same point. Something genuinely significant happened to human demography at the Neolithic-Bronze Age transition. It would be hard to say that the Beaker people in those graves, your Amesbury Archer and his ilk, were "Yamna Culture" intruders from the Pontic steppe, when, as far as we know, he came from Spain, but our map of archaic DNA distributions does suggest an influx of male lineages from the territories where rape-mad Red Army soldiers might originate. Just because I don't like it, doesn't mean that it's not true.

On the other hand, maybe the forgotten gurus of my grandfather's library have something to say. And they do! 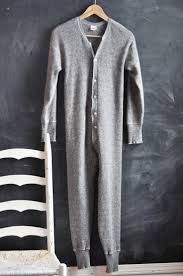 A well knit pair of wool longjohns is a grandmother's love in a surprisingly compact package. Stuart
White will have long underwear before a coat, a(n extra) blanket, much less linen and cotton drawers. Two pairs, worn over each other, he prefers to fur coats, at least in any temperature short of winters in the Sierra Nevada.

But back up a moment: 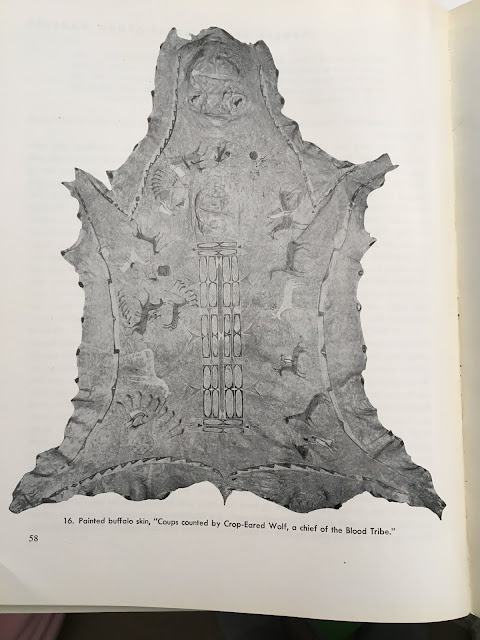 This is one of numerous painted buffalo pelts used to illustrate Barbeau's Indian Days, and the only uncredited one. I assume the owner was unwilling to be associated with the mighty Crop-Eared Wolf  in public. Not so the artist, who has executed with a skill that a small picture of a large hide does not make entirely clear. 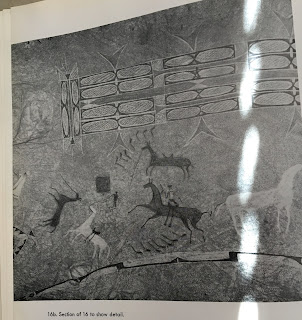 Now I show the work. 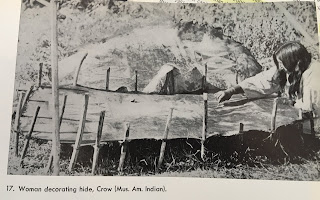 The well-mounted retinues of men like Crop-Earred Wolf or the Stony sociopath, Crooked Nose, who appears in several chilling anecdotes, were well-furnished with painted hide hangings for large tipis; but the point is that they are large, awkward and resource intensive. Stewart White loves his buckskin shirt, but notes that it takes five deerhides to make one, inclusive of those practical as well as decorative fringes.

Longjohns are fairly resource intensive, too. That said, all that is needed to make them is more yarn. I've talked about shearing and cleaning yarn around here before, and gestured at the art of dying it. Forget that here: the outdoorsman's advice has to do with wool's ability to retain its insulating value while wet, and to wick out moisture. It is tedious and quotidian, but the fact that you can sweat in your woollen underwear and then be warm when the Sun goes down, may  be the difference between life and death on the trail.

White advises the new outdoorsman to procure five key pieces of wool clothing. A felt hat can take a shape and provide sunshade and rain cover alike. Long underwear, I have already mentioned. He is at pains to emphasise that they are not uncomfortable in the heat, and, as I've said, are lifesavers in the cold. He also prefers wool trousers to the canvas jeans of the west, noting that jeans are all very well until you have to go in and out of the water, either on the trail or because you are an upper-class twit of a fly fisherman. Finally, wool socks have the same virtues. Overall, especially when riding, you want a western slicker, "two sizes too large," so that it covers the legs. After all, the long flaps can be belted up "like a pantomine king" when one has to go by foot.

But wait! There's more! White doesn't think that you should burden yourself with too many blankets, but you certainly need one, to be used as a wrap at need, as well as bedclothes.

A canvas and a "rubber" sheet, laid over horse blankets, complete one's bedroll on riding trips. (White has no time for sleeping bags.) 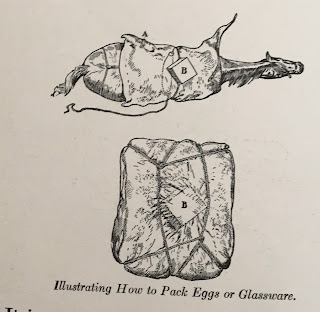 Neither the ropes nor the covers that form this pack saddle are going to be made of wool, which is too elastic for the duty. The horse blankets that cushion the load are another matter. They have to breathe. For that, you need wool. You also, by the way, says, Stewart, need an AXE.


"On a horseback trip in the mountains, however [a hatchet, tomahawk, or Marble Safety Axe] will not suffice. Often and often you will be called on to clear trail, to cut timber for trail construction or to make a footing over some ultra-tempestuous streamlet. You might peck away until further orders with your little hatchet without much luck. Then you need an axe --not a "half-axe," nor a "three-quarters axe--" but a full five-pound weapon with an edge you could shave with. 'Chewing a log in two' is a slow and unsatisfactory business."

The evidence is that wool arrived in Europe at the end of the Neolithic and usurped the place of the bast and other vegetable fibres (linen and grass) attested in earlier use. The temporal coincidence of wool with the Beaker Complex and the arrival of animal traction is surely no coincidence. There's a reason we speak of a Secondary Products Revolution! One can talk about the economics of the transition until one is blue in the face without displacing your axe-wielding barbarians from the steppe. What it might be as well to talk about is Otzi, the alpine traveller of c. 3400--3100BC who dramatically failed to surmount the physical hardships of the Brenner Pass, leaving us with the toolkit that linked the regions of Europe together before the Beaker Complex. No more need be said here than that he was wearing a small fortune in furs that would not have kept him warm so well as woollens, that his bearskin hat must have been uncomfortable except in very cold weather, and that he was certainly in no position to run a pack train.

Otzi's adaptations to alpine conditions were rare in his time: a millennia later, travellers were everywhere: crossing the Irish Sea, canoeing coastal routes in the Mediterranean; penetrating into Jutland and southern Scandinavia. In fact, given the wealth of furs he was wearing, it is hard to see how, even in his time, there were not intrepid woodsmen hunting for pelts and hides for their "womenfolk" to turn into shirts, pants, moccasins and hats.

Let Stuart Edward White make it very clear. Without woollens, these far travellers will not make it through rain squalls. I do not know why they travelled, as the isotope analysis shows that they did. Was it to hunt or to exchange, carrying amber, metal and trade blankets? Was it to charm, Burkett's singers, diviners and doctors? Did long-haired young men, sweet voiced and strong-calved, charm maidens, or did beetle-browed warriors make room for themselves with a hard blow of an axe? One scarcely begins to know, but it was not done without woollens. Longjohns. We need to care about longjohns, or, more practically, socks.
Posted by Erik Lund at 1:10 PM