The Early Iron Age Revival of the State, 17: "Boiled in alkalis and then laid out in the sun and wind to bleach:"

Thus F. H. Bramwell, who begins his very brief discussion of the "chlorine bleaching powder industry" (F. H. Bramwell, "Mechanical Engineering in the Chemical Industry," Engineering, 24 June 1949: 597--600, for those coming in late) with the observation that in the vague, early times before the chemical industry, crofters used to boil cloth in alkalis, than lay them out to bleach. "Chlorine was found to expedite the process," and "chlorine stills" were developed for the home production of chlorine. He goes on to describe the Weldon still, which doesn't seem very homemade to me, and says that it worked by the oxidation of hydrochloric acid with manganese dioxide.I assume that manganese dioxide was a common industrial earth, and that people were burning salt in sulphates to produce hydrochloric acid. Which, as these things go, is actually a reasonably safe thing to do.

Or perhaps that's just the sort of thing that Professor Bramwell had learned to say about doings on Britain's blasted heaths. 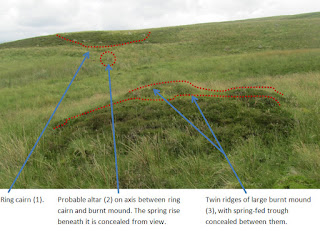 Fresh from war work at "the X Site,"  just outside Rhydymwyn, Flintshire, or perhaps just from investigating it, the erstwhile Major Bramwell knew from wild chemistry on wild moors. (Which is to say, I am not giving this trivia up.)

Professor Bramwell explains that Weldon still was assembled of locally-available flagstones, boiled in tar if of porous stone, with seams closed by more tar, hemp cords, and external ties. The aqueous acid was collected as it dripped out of the still. Making bleaching powder involves some extra steps, of which the most hair-raising involves men with handkerchiefs tied over their mouths, raking a powder of hydrated lime laid on the floor of the insufferably hot still until it was deemed sufficiently saturated for sale.

Since it's been awhile since I've last been on this subject, a recap might be in order. During the early to mid Iron Age, that is, from around 800 to 500BC, a pristine emergence of the state occurred in the western Mediterranean. The most famous of these new states were Rome and Carthage, but there are numerous other examples, such as Massilia (modern Marseilles) and the romantic and enigmatic Tartessos, somewhere in coastal southwestern Spain.

It is perhaps noteworthy that the most westerly of these new states were more fragile than Rome and Carthage, and vanished into obscurity with the rise of Roman power. Perhaps we can describe them as peripheral, and extend the discussion beyond the Mediterranean basin to early oppida such as Heuneberg and Bourges. But whatever else might be said of them, for the purposes of this blog, the key element is the emergence of the forest industries. Correlation? Cause? Mirage? I don't know!

To take them in reverse order and add some clarity to the idea of "forest industries," "mirage" refers to the suggestion that these trends are not new. The most obvious answer to that is our conceptual paradigm. Iron production is constrained by fuel rather than ore, that is, by charcoal. Iron-making is a great forest industry, because forests generate charcoal. Iron production defines the Iron Age. Still, the idea that the link between the forest industries and the pristine emergence of the state is a mirage can be maintained by pointing to evidence that iron making began after the other trends that we identify with the Iron Age. Glass production outside core areas like Egypt is more firmly dated to the earliest Iron Age. Glass is made with alkalis, and these are traditionally  sourced from potash. Soap or detergents require alkalis and are traditionally produced from potash. It is hard to see a woollens industry without cleansers, which makes woollen cloth a forest industry; with the additional connection that iron shears made possible the transition from relatively labour-intense but longer and uncut teased wool to sheared wool.

Having dwelt upon alkalis, wool and chemistry, it is time to dive a bit deeper. 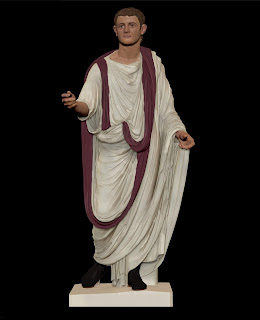 Toga! Toga! Toga! The toga praetexta, here modelled by Senator Mannequin, isn't quite the all-purple imperial toga, but as the experts keep reminding me, when weaving large pieces on a Roman-style warp-weighted handloom, you need to start with a strong edging to anchor the weaves in the middle bits. The implications of the insight is that the toga, along with other Iron Age and Roman-era garments made of large pieces of cloth, are not to be seen as crudely improvised, but as symbols of wealth. Large pieces like the toga were at the limits of contemporary weaving practice, which is why they show up in -the sixth century "situla art pieces" of the Villanovan burials around Bologna and elsewhere in the Eastern Hallstatt. (I am indebted to Susanna Harris for this insight.)

When we write the history of the Eastern Mediterranean's arrival in the Iron Age west, certain points remain interesting and controversial. Did the Phoenicians really go looking for silver at Tartessos to meet Assyrian needs? Does the Sargon stele recovered on Cyprus really show that the Levant was looking eagerly westward for Western resources? Does "Orientalising" art represent an  overbearing colonial presence, up to, and including, a Turkish colonisation event in northern Italy giving rise to Etruscan civilisation? How important is colonisation, generally?

What's not at issue is the search for the murex snail that produced Tyrian Purple. The famous dyestuff that produced otherwise impossible-to-reproduce colourfast reds, blacks and purples is generally agreed to be both labour and resource intensive. Not surprising when it is produced from a secretion in snail mucus! As with sea silk, any large-enough market for this luxury good is going to drive the expansion of factories around the Mediterranean littoral and adjacent Atlantic waters as far west as Spain and perhaps even the Canaries. There is plenty of archaeological evidence that exactly this happened, and it suffices in itself to explain Iron Age "colonisation" in the west, only subject to there being sufficient demand for high quality dyestuffs. 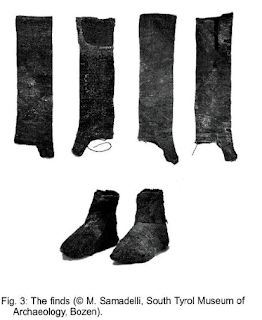 Here, recent archaeological discoveries and new frontiers of archaeochemistry transform our understanding of the Early Iron Age. In 1994, the retreating snowfield on the slopes of the Passo Pirnlücke revealed a stash of well-made but also heavily worn (darned and patched) clothing, of which two sets of leggings (probably inner and outer) and a pair of shoes were the best preserved. They are imperfectly carbon dated to the 800-400BC period. Karina Grömer reports that they are typical handloom products, in that the design was produced in the weaving process, and not tailored from a bolt. This is a vitally important point that holds for Iron Age and Roman textiles, although the author takes this generation-old insight almost for granted. For her, the important point is that inner threads reveal evidence of dyeing.

From a more remote and peripheral (that word again!) region with a much more comprehensive set of data comes reinforcement and the kicker. Iron Age clothes recovered on Danish bog bodies are uniformly well made, like their Bronze Age predecessors. But, unlike them, are consistently and brightly dyed. No Bronze Age bog textiles are known to have been dyed. It is not that dyeing was invented at the Iron Age to Bronze Age transition. Distrusting indirect evidenceas perhaps a bit excitable, I point to direct archaeological evidence, admittedly from the eastern Tarim Basin.  However, Bronze Age dyeing may be characterised as "experimental," whereas workers on Late Bronze Age/ Early Iron Age dyed clothing are willing to talk about "industrial" scale production, at least in Palestine.

The dyes so far identified in the leggings is probably woad, a source of indogitin in lower concentrations than from indigo. Madder and a cochineal-like dye extracted from insects native to southern France have been found on the bog bodies. This is important because while Tyrian Purple was not reproduced in Bramwellian times, no mystery, however bogus, attaches to the production of  dyed clothes from woad, madder, indigo, cochineal and other industrial dyestuffs. The precursor, in the case of indogitin, indican, is extracted from the plant material by fermentation (which gets rid of what is not indican). It is hydrolised, that is, dissolved in water, and exposed to an alkali to give it "bite," that is, turned into indogitin, which readily binds with keritinaceous material in wool. Saturating the long-chain cellulose materials in cotton is much more chemically challenging and leads to a long list of exciting chemical processes involving various acids and culminating with the discovery of even more exciting chemical products, such as guncotton.

Stale urine is an excellent source of ammonia, and the Emperor Vespasian imposed a tax on collecting basins at public urinals, which is one of those everyday details of industrial practice that has been recalled from Antiquity. Well-to-do literary men can hardly be expected to tell us about how clothes were shaped on the handloom to the virtual exclusion of tailors, but jokes about urine have a lasting fascination. The one noteworthy exception to this lack of interest amongst Roman literati is Pliny, who leaves us with a well-known (in the industry) mystery concerning the process by which murex snot is turned into dye. His process, involving the fermentation and reduction by boiling of the collected snot organs in a heavy brine, does not and should not work. In 1998, British engineer John Edmonds added some potash to the brew and produced indogitin, as we might expect.

In fairness to Pliny, he might not even have been aware that the ashes flying around the simmering pots were an ingredient. They would have been collected around the coastal factories and were probably typical coastal halophytes, ideal for producing sodium hydroxide in the pot. One might even go so far as to assume a functional factor. Whatever the other advantages of using murex instead of woad and other indigo-containing plants, the Phoenician dyemaking colonies of the west didn't need urine, and thus the social apparatus required to collect it. Because they were on the seashore, you see. 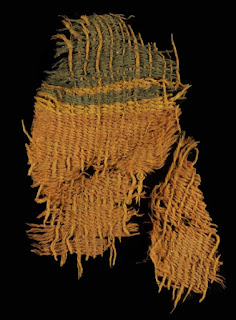 It seems as though indigenous textile production styles gave way to a more Mediterranean style in the late Iron Age. In Italy, this means increasingly "Greek" production as Hallstatt gave way to La Tene. B. Martin-Aguilera reports a similar chronology from southwestern Iberia. At the moment the scholarship is tentative about the relationship between the production and consumption of textiles and the emergence of urban centres in the Iron Age Mediterranean. The question is whether the rise of the "Mediterranean" textile ecumene promoted urbanisation along the coast while retarding it inland.

That kind of inventiveness gave way to Mediterranean sameness, and, perhaps, a retreat from technical inventiveness until the appearance of the draw loom in Late Antiquity and the emergence of the medieval textile trade in bolts of cloth rather than finished or semi-finished pieces. A particularly fascinating aspect of this, although far afield from this blog post, is that since the textile business already integrated Indian and Chinese production, this change in the standards of trade must have somehow been coordinated across the whole Eastern Hemisphere in the course of Late Antiquity.

So there you go, a little piss and vinegar for the weekend.