The Early Iron Age Revival of the State, 18: Apocalypse As Driving Force (Speculation)

Arguably, the real speculation around here is what my work schedule will look like next week, and whether I'll need my Saturday off to start work on postblogging July. I don't think I'd better spend any more time around here than this, and I do want to double down on the idea of the Bank of Thebes carrying out fiscal easing operations by looting New Kingdom tombs and injecting bronze and precious-metal-liquidity into the Mediterranean basin economy, with immediate and gratifying effect.

Tearing my eyes away from the Mediterranean coast of France and its tantalising proximity (on the same continent, anyway) with Oppidum Heueneburg, perhaps Herodotus's "Pyrene," there is a first pristine new state of the Iron Age that by rights claims priority of attention. Dido's Carthage is incomparably the greatest foundation of the era "around 800." In fact, notwithstanding Virgil, who needs several centuries between Aeneas and Romulus, archaeology is increasingly clear on the approximate reliability of the traditional 813BC founding date. In fact, we might be close to getting rid of the "approximately." From carbon dates to a mass of pottery that can be correlated with the incredibly precise Aegean sequence, we can certainly say that it occurred sometime between 830 and 800. It's the very model of the Early Iron Age revival of the state. Unfortunately, that raises a bit of a problem, which I guess I've already "solved" with my introduction.


Carthage's perfection as a paradigm of the Early Iron Age revival of the state goes far beyond the fact that I can throw "800BC" around as a date without immediately offering a qualifier about how the Iron Age began in different areas at different times. It is pristine in being built on a site with no earlier settlement activity. It also introduces, as many a Tunisian will have noticed over the years, a West Semitic language into a Berber (Afro-Asiatic) context. It's not the only place where Phoenician is in a position to influence other languages, but since we get a bit shirty about West Semitic influence on Indo-European languages like Greek and the Italic family, and have little idea what language the "Tartessians" spoke, it is one place where we can let our historical linguist freak flag fly while only offending people who deserved to get colonised on account of their shameful delay in developing a local nitrocellulose industry.

In fact, Maria Eugenia Aubeta is willing to date one Phoenician pristine colonisation event (at Morro de Mezquitilla), to 807--802. Interestingly, the German excavators at the latter place, working from 1967 into the mid  found a lost scarab and a blacksmith's forge in the earliest layers of the settlement, which they dated, in the more conservative style of the day, to shortly before 750AD. It's a small difference, but an important one. The linked article pushes first Phoenician contact with the Atlantic maritime zone to the period before the Late Bronze Age collapse, and the settlement of Carthage, along with the other early colonies, to the period of the Assyrian "collapse," circa 824--753 (although not all Assyrianists would push the "stagnation" back before 783.) Nevertheless, the general point still stands. Although trading with the Neo-Assyrian Empire, the Phoenician coast was not under Assyrian pressure, and we do not now look to refugees fleeing Assyrian atrocities as the first colonises of Carthage. Although Aubet rejects this "Frankenstein Model" --seriously!-- she accepts the traditional story that Elissa/Dido led a group of refugees from internal strife. Internal strife in an ancient city state isn't necessarily anything that needs explaining. But on the assumption that it does, that we are missing a driver, I proceed.

I'll frankly admit that this post was inspired by Academia.edu's bots, which decided that since I liked Ad Thijs' paper on the Wehem Mesut, that I would love to see all of his other papers relating to chronological problems in the Egyptian 20th, 21st and 22nd Dynasties. Thijs advocates moving some fairly significant dates here and there, but the apocalypse remains safely confined to the Eleventh Century, a phenomena of the Late Bronze Age Collapse. He does advocate for moving the dates of various 22nd Dynasty pharaohs named Shoshenq around, with the consequence of removing a supposed sack of Jerusalem in 945BC down a century, undermining a key argument for the reality of the House of David. This is naturally quite important, since if archaeologists and Egyptologists can prove that David and Solomon were Eighth Century myths, Israel will have to give Jerusalem to the United Nations and accept a two state solution, as is only fair.

That, however, only takes us to fifty years before Elissa's departure from Tyre. The key reign is that of Usermaatre Setepenre/Setepenamun Shoshenq III (837--796). A lunar correlation allows us to date the accession of Pedubast I to the eighth year of Shoshenq's reign and to either 835 or 824. In either case, Shoshenq was reigning in Tanis from 813 down to 800, while Pedubast had claimed a royal title and reigned in Thebes. After almost two centuries of stepping around it, realities had been squarely faced. Egypt had two kings. Pedubast I is best known from the active propaganda of his opponent, Osorkon B, who eventually won out and decorated the Bubastis Gate at Karnak with a copious Royal Annal. Osorkon tells us that there was a three-decade civil war in the Thebaid featuring rival kings and High Priests of Amun, although apparently acknowledging that "Osorkon B" and the subject of the Annals are the same person also leads us closer to the two state solution, [something something].

Pedubast had at least enough sway to have his cartouche carved at Karnak and at the Great Temple in the Dakhla Oasis, leading Egyptologists to conclude that his power base extended to the Western Oases. This is all very well, but it is worth noting that Thebes would have been by far the largest city in the Mediterranean Basin at this time. I understand that a complex of temples and palaces and the villages of the oft-rebellious workmen across the river might not technically qualify as a city. But in any realistic terms, the concentration of population and aritsanal skill seems to qualify. At some point in his reign Pedubast commissioned a life-sized bronze statue, of which the middle bits survive. It is both a highlight of Egyptian art in the period and the only surviving such statue from the period. Thebes was capable of some very impressive feats, a point I dilate on a bit below, because I'm disorganised that way.

Meanwhile, Osorkon B/III and his father, Takelot II/F being based at Heracleopolis Magnus, an abandoned city site not far from Beni Suef that we like to refer to by a Greek name because being confused is fun! 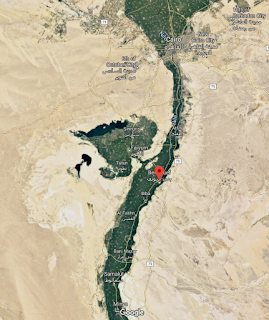 If Takelot F and Takelot II are the same person, we get into the same mess with our key Shoshenq being active too late to ravage Rehoboam's Jerusalem. Presuming that we've had it up to here with Biblical archaeology's past-colonising ways, Takelot II was the High Priest of Amun at Karnak in Thebes before he started calling himself king, instead. This makes him a bit of a pluralist, if not a simonist, and perhaps that is why a revolt broke out in Thebes, pushing Pedubast I to the fore, although the actual leader may have been the long-time High Priest of Amun at Karnak, Harsiese B, attested from 874, in which case there might have been two High Priests of Amun even before the revolt, which seems strange, but doesn't bother the Egyptologists, so I guess it doesn't bother me. It looks like the argument is that there were two High Priest Harsieses, and I just fell into a Wikipedia-set trap of unreliable speculation above.

On the other hand, the name of the High Priest of Amun between 860 and 855, who would be Harsiese B, according to the theory with which I started the paragraph, was erased from the official list in antiquity. Pedubast died before the end of the rebellion and was succeeded by Shoshenq VI, who lasted until his own year 6, and, uniquely, has "Beloved of Amun" written in his royal cartouche. Something ideological is going on here.

Unlike the shadowy Theban pharaohs who came before him, Osorkon III celebrated himself in style, with numerous donation steles and stones spread from Heracleopolis Magnus down to Thebes. His son, Takelot III, was served by a Treasurer named Djedmontuiufankh, for whom we have a family tree liberally sprinkled with progenitors named "Harsiese," on which slender evidence I pronounce the local elites of Thebes and the Western Oases to  have reconciled themselves with a victorious northern faction. Exactly how that happened, I have no idea. The functional issue that detains us here is the Bank of Thebes' fiscal easing programme. The KV40 cache, discovered in 2014, confirms that royal mummies were still being collected, unwrapped and deposited collectively well into this period. I am going to choose to take as evidence that officially sanction tomb robbing was still going on, justifying my argle-bargle about fiscal operations. More grounded would be the observation that robbing tombs of bronze and bullion, and reworking it, is clearly a major industry in Thebes by 850 or so, but one that may be in the process of exhausting its reserve.

No major pharaohs were found in the KV40 cache, reinforcing my supposition that the burial fields were playing out by this time. On the technical side, relying on such other evidence as I have, casting life-size bronze statues of people is very challenging technical work. We owe the fame of Leonardo da Vinci to the technical-cultural ferment inspired by a commission to cast a free-standing eight-meter-long bronze equestrian statue of Duke Fernando Sforza of Milan. This was far more technically challenging than the Pedubast statue, but allowing for a suitably Whiggish trajectory of technological progress, the Theban project seems precocious enough, and allows me to riff on Bert Hall's old graduate seminars to observe that any artisans who could pull that off must have worked in bronze casting before in what counted, for these times, as highly technical ways.  The obvious candidate pieces are bronze ritual vessels, well attested in literature and the Assyrian tribute lists, if unknown in Middle Eastern contexts. As for significant downstream consequences, industrial-scale cupellation of silver has to get its start somewhere! (Put some lead-silver in the tombs, and we're good to go.)

Piling on a little more completely unjustified speculation, it is likely that a good part of the recovered bronze wealth enjoyed by the rebel Theban regime was in the form of temple furniture. That being said, for my "Bank of Thebes is carrying out fiscal easing operations" speculation to work all the way over at Carthage requires injecting that metal into the larger economy. Short of the discovery of Third Intermediate Period material in Siwa or Fezzan to demonstrate the existence of a trade route via the Western Oases, perhaps even to Carthage, we have a problem.  The Theban regime may or may not have needed Mediterranean resources such as horses for war or luxury goods for patronage, but access to the Nile route, it was not going to get them. The Pedubast regime has a problem, and perhaps this is the problem. Too much of the burial fields' treasury is still locked up in temple furniture, and that might be why it was so short lived.  Since its fall is so closely coincident with what increasingly looks like a sudden explosion of Phoenician activity in the west that my anachronistic "increased money supply" story seems vaguely plausible.