UBC Library is currently closed, 'cuz there's nothing that says social mingling and contagion like old books. The decision will be "revisited" on 8 April, and although I expect I know what the decision is going to be, I will wait before I take steps that I'll regret, such as subscribing to Aviation Week to get access to their online archives.

That's if the apocalypse hasn't got me by then. Since a considerable number of my customers seem determined to keep on paying for bananas, the Sing Tao, and other random old person goods with small change hauled out of the crevasses of their outer wear (and probably can't pay any other way), that does remain a worrying possibility. At least, to this point, I don't have to worry about the other apocalypse, when people can't make rent in April, leaving the poor, honest rentier no alternative but to evict, foreclose, liquidate, and otherwise shut down our entire civilisation. You know. Just like what happened in China.
Speaking of historical analogies, this is a historical blog, and I perhaps didn't give the total shutdown of the British economy in the winter of 1947 as much time as it deserves. That's especially true considering that it has largely gone down the memory hole. (Just like poor Edmundo Ros, then reigning supreme on the BBC's Third Programme.) 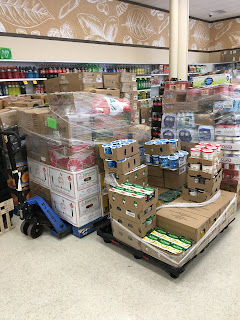 So the winter of 1947 was when the  British economy shut down (well, the "non-essential bits") to save coal. Depending on the particular business, the shutdown lasted for most of the month of February and into March. BBC television, for example, was off the air from 10 February 1947 to 11 March, while The Economist missed its 22 February and 1 March issues in perhaps the gravest blow to press freedom and English values since ever. (Says The Economist, which managed to get its point across in an insert in the Financial Times.)
(Look! It's the economy not going!) 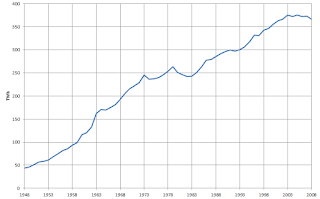 So. What happened? In spite of my constant carping, it is nice to have a digital archive of old issues of The Economist, because it means that I can answer this question. It's first important to realise that this was in some respects growing pains. People apparently don't like to compile statistics of British electrical generation before 1948, because that was before nationalisation and you'd have to add or something, and, besides, the war makes it impossible to spot a trend. On the other hand, a graph that starts in 1948 isn't particularly useful for 1947, except insofar as it is as good a barometer of post-1947 economic activity as any. Engineering used to do regular thumb suckers on electrical generation in Britain, and if I could find any of  them (that sounds hard!) I would be able to report that it was going up pretty fast in 1946 and 1947, too. 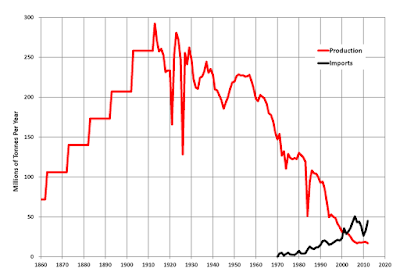 Doubling in ten years seems like a pretty fair clip, and runs well ahead of coal production, which declined uncontrollably through the war years and then begins to climb again with nationalisation. In spite of the Economist's relentless pessimism, the 1947 production nearly hit the government's ambitious 200 million ton target, and when monthly rates began to exceed that annual target, coal exports presumed in  plateauing in the 1950s and beginning a steady decline in 1948. Coal shortages would reappear in 1951 and 1952, and we can see from the chart that production plateaued in the 1950s and began a steady decline in the early 1960s.

Considering that, as late as 1970, coal was still providing 200 TWh of less than 250 total, this is almsot entirely a story of sustained economies. That's a lot of efficiency! Has anyone told Correlli Barnett? Intriguingly, the backwards view of the old electrical supply engineer takes dead aim at the British Standards Association and the government's drive for industrial standardisation, noting that the restriction of turbogenerator production to just two standardised types got in the way of innovation, and was dropped just two years later. Has anyone told, etc?

The winter of 1947 was not, however, the most auspicious beginning to all of this. It is probably not that surprising that The Economist was sanguine about the actual shutdown, while profoundly concerned about the balance of payments. The coal problem, The Economist points out, came from a failure to ration coal to essential industries, allowing stocks to run down to the point where pretty much everyone had to shut down. And wasn't "manpower" like coal, in the sense of being a resource that was in short supply, and which needed to be rationed out to essential (export) industries? If this doesn't seem like the smoothest of pivots, it's pretty typical of the Crowther-era The Economist in that a Leader that's ostensibly about the coal crisis can barely be bothered to spend a page on it before moving on to predict the imminent end of American imports (and thus mass starvation) and a continuing decline in coal production due to the 40 hour week amongst other scattershot attacks on the government, the cabinet, and Emmanuel Shinwell.  This bit particularly annoys me, as the steady rise in coal production through the mid 1950s is as clear an argument for the 40 hour week as you can possibly imagine.

Not content to level a blast at the shirking coal miners for being so lazy and trade-uniony as to get tired after a mere 48 to 50 hours in the pits, The Economist also directed a somewhat oblique but still recognisable attack on that particular breed of slothful and unpatriotic Englishman who heats his home with an electric space heater. (To be fair, it might also be interpreted as an attack on any kind of home heating; but the electrical supply industry tends to go spare at the space heater at the expense of the old fashioned coal grate.)

Moving on to Business World's more focussed approach (at least, when it is not attacking Hugh Dalton's easy money policy in  impenetrably jargon-riddled language), we learn that, in advance of the shutdown, unemployment in the range of 5 to 6 million was expected, and a cost in "national income," as The Economist was still saying, of £40 million a week. Wikipedia says 4 million in the end, out of a workforce of 21 million, so in the end, not as bad in the moment as the august magazine predicts. The Economist goes on to assert the well-known "California stop" principle of economics, which says that if the economy has to stop and idle until the light changes, it will take forever to get it back up to speed, resulting in a more likely loss of between 3 and 5% of British national income for 1947.

There was also an "enormous increase in public expenditure" to consider. As from 15 February, the Government had already guaranteed full pay to civil servants through the shutdown while only asking industry that it meet payroll for the shut down weeks, presumably out of its own pocket. This predictably had The Economist concerned about the fairness of it all. Although at least, thanks to the booming economy, there was a substantial primary surplus and a fully-funded Unemployment Fund to call upon.

In the end, while 1947 was not a good year for the British taxpayer, and the floating debt increased by some £470 million, although this was in the expected range and the budget would return to surplus in the next year. fortunately, revenues, expected to fall by £56 million, instead rose by £80 million, a good measure of the general buoyancy of the economy. 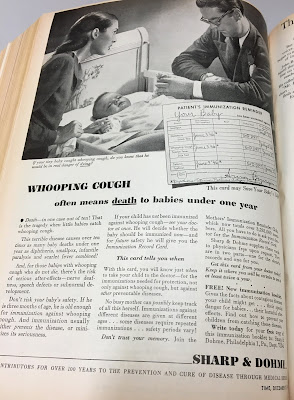 These results are not the final verdict on the stoppage of 1947. The Wikipedia author traces everything from devaluation to the Marshall Plan to the Labour defeat in 1951 to the winter of crisis. However, I find myself skeptical that electors remember things that far back; every non-dollar economy in Earth devalued in the fall of 1949, rendering a "made in Britain" explanation a bit problematic, even considering sterling's strength in those days; and while the Marshall Plan was a landmark in the development of the postwar liberal order, it should also be remembered as a bailout for the American farmer. In the absence of a global food and agriculture policy (the same issues of The Economist that cover the coal crisis trace the failure of John Boyd Orr's "world food policy"), what else are you going to do?

So there you go. One historical example of a national economic shutdown that didn't end the world. Hopefully a good precedent for the coming months!

Search Results£. Wikipedia says 4 million, out of a work force in the range of 21 million.

Email ThisBlogThis!Share to TwitterShare to FacebookShare to Pinterest
Labels: It's All About Me, Public Engagement, Technical Appendix, The Great Siege