An Epidemiological-Technological Appendix to Postblogging Technology, 1943--49: The Iron Lung

I'm not a medical kind of guy, so I've mostly stayed away from the human sciences side of things in these technological appendices. Although I do see, looking back, that I promised a Technnological Appendix on iron lungs at some point. When I did so, I had 2022 more in mind, but the pandemics of 2022 will have to take care of themselves.

Also, the doctors can't be entirely immune, if only because we've met so many awful, awful surgeons in the pages of the old Medicine sections. I'm going to have to hit the right balance between body horror and humour, but the various maniacs experimenting on maniacs deserve some notoriety. Especially when the guy who was treating polio by jackhammering kids wound up as a President of the Los Angeles AMA in later years. Again, though, it looks like I can wait and do a long, long checklist of doctors doing brain surgery on mental patients just because they can. (Or bisecting King George to relieve his stutter or possibly cold sweats, as they actually did.)

So. Iron lungs. Yes, they are a very technological solution to a very real epidemic. But there's more to it than that. I'm old enough to remember the detritus of the popular culture of the 1950s,. Joke books were a thing, and beside the still-acceptable "Polack jokes" and "dumb blonde jokes," there was a genre of "sick jokes" that included  "iron lungs." For a child of as early as 1964, the iron lung had become a mysterious phenomena of a forgotten age. The jokes, not so much.

Hard as it is to imagine, even believe, in this modern age of the triumph of science, between 1952 polio had gone from a seasonal terror to a historical artefact. An age in which children still died of disease had ended, overnight. At which point it seems as though we decided that we could do without children, and thus this modern age of pandemics that kill the elderly.


Wikipedia describes poliomyelitis as a viral disease that infects neural tissue, although it can manifest in the upper respiratory, where it makes its first inroads after oral infection and in the gastrointestinal tract due to "viremia." While about 70% of polio infections are asymptomatic, about 1% infect central nervous system tissue. This will cause symptoms of head and bodyaches, and general blahness at least; in somewhere between 10 and 50% of those cases proceed to paralytic symptoms, some of which are permanent. Paralysis is as uncommon as 1 in 1000 in children and one in 75 of adults. Children typically suffer paralysis of one leg; adults are more likely to experience extensive paralysis in the chest, abdomen, and all four limbs. It is in these cases and respiratory difficulties, often permanent, result.

From these numbers, it will be clear that the United State's 1952 total of 58,000 cases, with 3,145 dead and 21,269 suffering permanent represents a pretty much universal epidemic and something of a public health failure. Coming in the midst of a baby boom, a runaway disease of childhood is to be expected, but one can imagine a more vigorous effort to cut down contagion than was made. In practice, Americans lived with regular epidemics and depended on herd immunity and a vaccine.

The National Foundation for Infantile Paralysis held its centennial convention in New York last week, where it heard that several polio epidemics are raging in the United States right now, with cases reported up to 12 July numbering 2881, compared with 1419 last year at this time. Texas had 745, California 447, and North Carolina, worst hit, 658. Where and when the next outbreak will hit is not known . . . Although normally seen as an infant's disease, more and more teen-agers and adults are being hit by polio, and fewer young children. Fully 25% of victims are now over 15 . . . [immuniities may be fading] . . .  Of those who died in the 1946 Minnesota outbreak, 44 died in the first week, and only about 17% lasted longer than a week. Survive five months, and you will survive indefinitely. Symptoms, which include headache, sore muscles, fatigue, digestive upset and throat pains, should be treated by putting the child to bed immediately. "Extreme physical activity is almost suicidal, and merely average activity is highly dangerous." Eleven experts joined on the podium  . . . to warn against public swimming pools during polio season. . . .

At this point I'll skip over the dubious contributions of a mid-century child psychologist worried that parents will give their young polio victims a complex by "pampering" them, and a team of surgeons hot to "treat" polio by surgically modifying  leg lengths by removing bone from one leg and grafting it into the other, as we are use to this sort of stuff by now and hopefully grateful that they invented "medical ethics" at some point. (Is that patentable?)  On a more credible note, some electrical engineers had an electromyograph to "listen" to the paralysed muscle and devices that might stimulate breathing or nerve growth, and one potential miracle cure, the "anti-vitamin" Oxythiamin. On the bright side, as 1948 turns into 1949, there is some hope that there won't be a polio epidemic in 1949. The delightful Dr. Sarnoff, also of Harvard's School of Public Health, did not make the conference with the "electrical stimulator" which had recently kept a brain-dead five year old breathing for 52 hours.

I have questions for the administration of the Harvard School of Public Health.

Talk of polio vaccines pops up in the blog as early as the 17 July 1944 number of Time, which slightly hashes a story about research into an inactive vaccine, killed by ultraviolet radiation. Hilary Koprowski demonstrated a live polio vaccine as early as 1950, but polio vaccines are tricky beasts due to the large number of wild polio strains and the potential dangers of infection by a live vaccine, and his was not approved for use in America. The crucial importance of an inactive vaccine is signalled when this blog joins old-time polio, already in progress, so Salk's inactivated vaccine of 1955 can look back at nine years of "the vaccine is almost ready" news stories at least.

I gather that the Salk vaccine was administered by injection and required multiple doses to take. According to his rival,  Albert Sabin, the ultimate goal was an orally-administered, attenuated live vaccine, a goal strongly questioned by Salk.  Sabine's vaccine launched in 1960, but in a particularly disappointing episode, Albert Sabin's attenuated live vaccine was not approved for American trials and had to be tested in the Soviet Union, with the predictable result that anti-communist politics delayed its introduction until 1962. It is predictably disappointing that Sabin was Jewish, and although so was Salk, he seems to have married a Gentile woman well before his rise to fame. 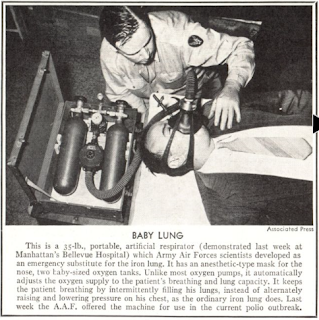 Sigh. The things you learn. But, of course, all of that is for the future in the winter of 1949, and what we are interested in is weird and frightening contraptions. Go, progress!

This one has featured around ehre before: the first "automatic" ventilator (almost) guaranteed not to blow your lungs out is now available. So if you are wondering why ventilators aren't ubiquitous, like, say, fire axes, it is because they have to be maintained, or they can blow out your lungs. (I also like the fact that it is a 35lb "portable" equipment.)

A proper iron lung is a "negative pressure ventilator." It seems a little counterintuitive, but we breathe by creating a lower-than-atmospheric pressure in our lungs by expanding our chest cavity. This causes air to rush into the lungs. An iron lung sucks air out of a cavity around the chest, causing the diaphragm to expand. This allows the patient to breathe normally. It's a very simple and elegant solution, although the best known iron lung in America in 1949, the "Drinker respirator," weighed 750lbs. Because we are talking about America, Philip Drinker and Louis Agassiz Shaw, both "professors of industrial hygiene" at the Harvard School of Public Health, patented and demonstrated their version of a century-old technology in 1928, with the intention of treating coal gas poisoning. However, they soon won fame for the efficacy of their invention in treating polio. Their iron lung was soon being produced in large numbers by Warren E. Collins, Inc., of Boston. Notwithstanding a price of $2000 each, fortune did not follow fame, as John Haven Emerson took their patent apart in court. Emerson's machine was better; but an Anglo-Australian refinement designed in Adelaide and mass-produced in a Nuffields factory was at least as good, and "one-thirteenth the cost" of the Drinker device.

Now there's a bit of Thirties Fordism I'd never heard about!  Also, Edward Both, designer of the Both-Nuffield iron lung,not only worked in Adelaide, but died at a place called "Mount Beauty," which is a major Australian vacation spot on account of actually having seasons.

At this point, I'm pretty sure the Australians are just having us on.

Speaking of having us on, how about the Frederick Snite family of Chicago, Illinois? 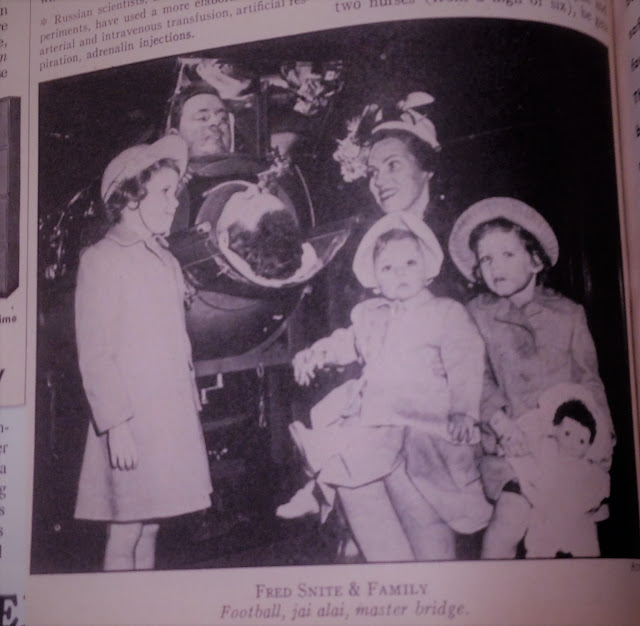 A victim of "infantile paralysis" at just the right age to benefit from the wonders of modern science, Frederick was determined not to let his diagnosis dictate his life. Which is praiseworthy I guess, once you get over the weirdness of attending Notre Dame home games in a specially-built trailer accommodating his iron lung, or donating a stone from Lourdes to Notre Dame's on-campus imitation of Our Lady of Lourdes.  The son of a "wealthy Chicago financier," Snite caught polio during a 1935 world tour, remaining in Beijing University's only iron lung for two years until well enough to return to the United States in 1937. He married Teresa Larkin in 1939, and must have had his daughters in pretty rapid succession, as this picture is from the 18 November 1946 issue of Time.

Snite died at the age of 44 in 1954 after eighteen years in the iron lung, and was very proud of having lived a "normal life," which is emphatically not what I would call it. There are three surviving iron lung users in the United States today, or at least were, in 1987, but it does not seem that any of them were continuously dependent on the device. I find it  hard to believe that Snite was, either, what with the procreation and all, but he sure enjoyed appearing in public in it!

So that's it for this journal of a plague year. Join me next week for a ten thousand word rant about people who go to the grocery store to buy three bananas from three change purses in the middle of a national quarantine.
Posted by Erik Lund at 11:41 AM