Here I am, back at my comfortable computer station in Vancouver, as from 9:40 last night. With the ergonomic issues --and the fatigue that comes from riding six hour+ stages-- I could write something more substantial, but I'm not going to, because I have a very small but personal matter in my teeth, and I am going to get it out! 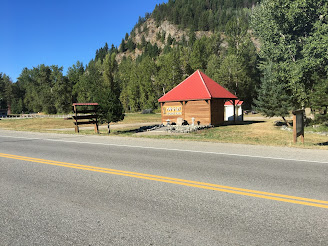 A large part of high school Canadian history, at least in my day, was dedicated to the building of the Canadian Pacific Railway.  I am not even sure that it is possible to argue that this is wrong, and offer a revisionist "People's History of Canada." It's not that there's not counter-narratives --that is, in fact, what I'll be writing about today-- but there is a very strong case that there would not be a Canada without the "iron road from the sea to the sea." I'm going to waffle all over that claim (I think it's wrong but am utterly unprepared to do the work needed to sustain a counterargument), but it's hard to argue against the economic and geographical logic.

The old-time historians and commentators were not modest about our ancestral achievement.  Firm that the "natural" lines of North American communication ran north-south, so that the railway realigned the geopolitics of a continent in line with the sociopolitical preferences of the infant nation. It was even, at least by the 1970s, the fashion to acknowledge some non-White participation, with dutiful Chinese labourers and misunderstood Metis, as well as the usual lot of "Indian guides."

Leaving everything else aside, there was a strong British Columbia connection to the generation that gave us this history, starting with Pierre Berton himself. For them, much of this argument was intuitive. It is hard to get from Vancouver to the interior of the province of British Columbia, and, more specifically, to travel between the Okanagan Valley and the Coast. For my grandfather's generation, you could take either I-95 or I-97 south until they joined away down south, at which point San Francisco --heck, Tijuana-- were as close as the other part of your native province, or the arduous but patriotic alternative of wagon road down the Fraser Canyon.

Prior to the Oregon settlement, the Hudson's Bay company maintained its overland connections with the East Coast via the York Factory Express. 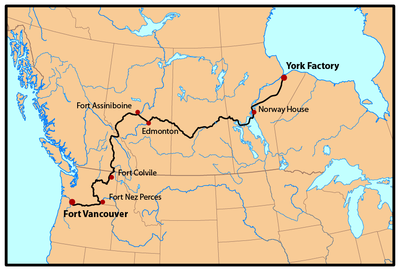 Our ancestors were cray-cray. Since it was clear that the settlement would follow the 49th parallel, this route was no longer "practical." Accordingly, Company servant Alexander Caulfield Anderson volunteered to lead an expedition into the maze of mountains behind Hope, looking for a route to Fort Kamloops in the Interior that did not follow the footpath through the Fraser Canyon, which could not be improved into a pack trail at any reasonable cost. Like pretty much everyone else who has gone into those mountains looking for convenient geography, Anderson ended up plumping for the Coquihalla, although his route didn't quite follow the modern Highway 5. Along the way, however, he, in company with an "Indian guide" named "Blackeye," discovered the more circuitous route followed by Highway 3, which is significantly lower than the Coquihalla, albeit with three(!) summits and heavier grades. It also leads to Princeton, and, less clearly shown here, via the Similkameen reaches the southern Okanagan Valley by several relatively modest passses.
The idea of a wagon road to the Southern Interior therefore remained on the agenda for many years. Dewdney's trail was more aspirational than effective, but it was  certainly travelled, notably by Susan (Moir) Anderson, subject of a biography by Margaret Ormsby. Two pioneers for the price of one! By the 1930s, the provincial government intended to build the route -- an intention we probably understand less well than we think due to our failure to get inside early "car culture," an insight I wholeheartedly credit to Ben Bradley, currently of the University of Northern British Columbia. A "machine trail" was built along the route, consisting of a very rough dual-rut road, and thanks to events at the end of 1941, it was obvious that the road would be built, and that opportunity would beckon for some.
At some point in 1942, Saskatchewan transplant  Roy Tower and a local partner met with Charles Bonnevier in Princeton. Perhaps the doyen of the prospecting community, Bonnevier had been prospecting in the area for "fifty-four years," as he vaguely told the Vancouver Sun a few years later. some years before, he and "his prospecting partner, Belgie," had tried to pre-empt a 160 acre section of a large meadow
just upstream of the forks of the Pasayten and Similkameen, where Eastgate, British Columbia, is now. Title wasn't clear, but they had improved the exemption --or possibly more, since the entire meadow takes up considerably more than 160 acres on two discrete sites--. Tower came to an agreement with Bonnevier in which the Tower family took over the exempted lot, with Bonnevier living there until his 1954 death. The Towers then set out to develop an automobile oasis to the slow rhythm of the conquest of the mountains by . . .
So, yeah. When I got into this topic, it was with the intention of digging down into the painful wound of Tashme Camp. Learning that the camp had been built on the site of "Fourteen Mile Ranch," I assumed that the "historic Tower Ranch" on the other side of Allison summit was a parallel phenomena.
It's not. Tashme Camp was built on a well-established ranch taking up the 1200 acres of what is now the Sunshine Valley, originally built by Angus McLeod (who had a "Lake House" providing refreshments and beds, something that I would have appreciated). As of 7 December 1941, it was operated as a "highly modern but unsuccessful" dairy operation by "successful mining executive Arthur Trites."
The obscene decision to deport 23,000 Japanese Canadians and the heartlessly cruel implementation of that policy, is far too large a subject for one blog post.
The evacuees included the grandparents of  one each of my nephews and nieces,
and there is yet no  honest balance sheet of the human cost of those evil days. Late in the evacuation, which is to say, six months in, by which time the internees being  held at Hastings Park racetrack might have been beginning to weigh on someone's conscience, a decision was made to built one last labour/detention camp at Fourteen Mile Ranch. Mr. Trite received $500/month in rent for his failing farm, and a group of MARRIED (this was very important to contemporaries) evacuees were found for the camp, which was (it was also important to say), just outside the 120 mile exclusion zone. Facilities were planned and hastily erected, and the camp was given a name by combining the initials of the (White, of course) officials in charge: "Tashme Camp." The inmates were put to work building the highway, which finally opened in 1949. 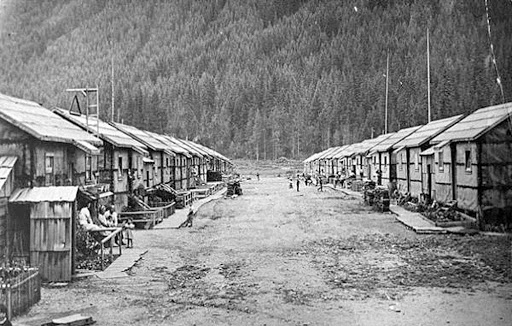 One way or another, the Camp would be operational right into 1949, as Canadian society grappled with accommodating racism by, if not deporting Japanese Canadians, then at least depriving them of civil rights, or, if not that, by persuading them to migrate to other provinces so that they would offend racists there, instead. The somewhat unexpected series of electoral victories for anti-racism in 1949 finally led to the abandonment of the project, and, of course, Tashme Camp.
While Eastgate struggled with staff shortages, structure fires and the traumatising burden of being first on the scene of one too many tragic road accidents in their gas station tow truck, the former road camp on the other side of Allison Pass was abandoned, Mr. Trite showing no sign of wanting back into the dairy business. A bullet point summary says that it was considered first for a Boy's Town, then used as a bunny hill ski development. Finally, at some point well before the same fate overtook the Tower Ranch, it was subdivided into cabin lots as a mountain vacation destination. In that, operating under the name of "Sunshine Valley," it has been more successful than Eastgate.
But my point, here and at long last, is that if you are looking for a roadside commemoration of the existence of Tashme Camp, you won't find it in Sunshine Valley. It's not exactly a matter of erasure --there's a Tashme Museum in the valley. It's just that things have worked out such that Tashme Camp is commemorated at a pull-out on the side of the road. While much appreciated by bicyclists, there is some historic erasure going on here. It's bullshit that we call the town "Sunshine Valley," and not "Tashme," and we should do something about it, if only as some kind of sideline of the current "memorialising history" thing that we may get back to at some point if this whole blood-in-the-streets thing calms down.

Email ThisBlogThis!Share to TwitterShare to FacebookShare to Pinterest
Labels: Gathering the Bones, Holidays, It's All About Me, Plantation of the Pacific, Port Alice, Public Engagement