The Crow's Nest Highway, Number 3, along which I stumbled and bumbled on my vacation last summer presents the Hope-Princeton as the first challenge for the avid bicyclist out of Vancouver, and it is a pretty meaty one. 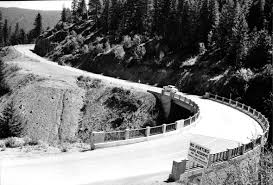 The way mountain roads are supposed to be, the road ascends a watercourse on one side, reaches the water parting at a "pass," and descends the other side. You might not know that the St. Bernard Pass is reached from a tributary of the Rhone that runs into Lake Geneva, on the one side, and a tributary of the Po on the other, but you know that's how it works.

The Hope-Princeton, on the other hand, ascends a left bank tributary of the Fraser, then switches to climb a significant hill to Sunshine Valley, of which I would have a vacation picture if my motel wireless were up to it.

The Valley in the Sunshine is carved by the Sumallo River, a tributary of the Skagit and of little consequence unless you live in Bellingham, Washington, where the Skagit enters Puget Sound.

From the end of the Sumallo/Skagit uplands, the highway ascends rapidly to the valley of the Similkameen, a tributary of the Okanagan, which falls into the Columbia far to the south in Washington State. Mount Allison summit, the highest on the route, marks the entry in the Columbia's enormous watershed, and since Princeton is on the Vermilion forks of the Similkameen, it's all downhill from there.

Or would be if the highway didn't depart the Similkameen and climb its merry way up Sugarloaf Sumnit in order to avoid some unspecified hold up in the valley of the river.

While I was not intellectually unaware of the existence of Sugarloaf Sunmit, I encountered it at 7:30 on Friday night, after departing Hope at 7:30 that morning. I summited, and made the hair raising glide down into Princeton in the dark (barring a few mild climbs that had me cursing the perversities of our sublunary world, but I only arrived at the Sandman Motel in Princeton at 9:45, after more than fourteen hours on the road.

Which is why this week's blog post is just me checking in to say that Keremeos is a very night place to catch 11 hours of sleep.

Email ThisBlogThis!Share to TwitterShare to FacebookShare to Pinterest
Labels: Gathering the Bones, Holidays, In which I meander, It's All About Me