A Technological Appendix to Postblogging Technology, May 1950: Jetliner Dreams

I've covered the outline of the early passenger jet here before. The De Havilland Comet seemed to have the market to itself at first, but then was pinched out by the Boeing 707, which was developed from a jet-powered tanker that the USAF eventually decided it needed to support its B-47 fleet. The Comet plays an important part in the British narrative that says that Britain's postwar aviation subsidy programme was a big waste of money. Meanwhile, the USAF order for 250 KC-135 Stratotankers cushioned Boeing's 707 project and suggests that Cold War military spending played an important role in the transition to jet transports.

But is there more to say about this? In a quiet week before, hopefully, the UBC Library reopens, I take my inspiration where I find it, and Brad DeLong has posted a lecture online suggesting that the historic expansion of the British economy through 1870 might have run up against a renewed Malthusian world but for a bunch of exogenous factors that accelerated "innovation."

It's modern economics latest surrender to the implacable grasp of the "free lunch" school of technological progress, according to which "innovation" comes from outside the economic process, and that the human species is forever vulnerable to a return to a Malthusian world of subsistence economics at any arbitrary level of technological achievement if we ever fail in our continuing propitiation of the mad gods of invention.

As, away back in May of 1950, the American aviation industry plays with the idea that a transition to jets is impossible, barring some kind of "socialist" intervention to pay the costs of developing a jetliner out of the taxpayers' pocket, I'm inclined to stop and meditate on exogeneity.

In the interest of getting in some plane porn we haven't seen, here's a Lockheed Electra of Air New Zealand, the former Tasman Airlines. (Looks like Short and Saro shouldn't be depending on them as a captive market for flying boats!) The Electra started as a rival to the Vickers Viscount, but is more likely to show up in the Lost Cause circles of British aviation as the Britannia's alibi for failure. Imagine my surprise to learn that the Electra was also a sales failure. Again, US Navy orders for a variant as the PC-3 Orion saved the day for Lockheed. 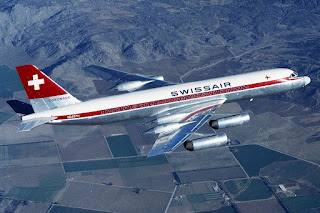 And then there's the Convair 990 Coronado, No service orders for Convair/General Dynamics! Or how about the Lockheed L-193? Ultimately, the airliner/jetliner business was left to Boeing and Douglas, and with Douglas/General Dynamics' departure from the field, we have the modern duopoly, and a growing suspicion that we may end up with a no-opoly by the time we're done with COVID-19.
Sure, everyone wants to fly and the world's economy depends on civil aviation, but it's just too expensive to build an airliner that suits the market and flies safely.
Sorry. Anyway. Is this how technological regression works?
Let's take it back to 1950. Not to harp on the matter, but it turns out that the one diamond in the rough in 1950 is the Vickers Viscount. What makes this all the more remarkable is that even the Viscount's piston rivals aren't doing well. Martin and Convair will persist with the 2-0-2 and 240 developmental lines and eventually produce commercially viable aircraft, but right now, they're big writeoffs. So, it seems, is the Stratoliner, and even the Constellation is a bit of a disappointment, in spite of the large numbers sold, mainly because it is too expensive for the airlines.
Right now, again, seventy years ago, the airlines are looking for a quick and dirty solution, and their attention  has been directed to the idea of direct prop-to-turboprop conversions.
Nothing will come of this, we now know, and the failure of the Apollo, Britannia, and, relatively, the Electra is, in hindsight, a great big warning light.
Again, I am picking on the same poor aircraft again and again. The Tradewind deserves it due to being a whole bunch of disasters wrapped up in one pretty package, but the issue here is the Allison T-40 turboprop engine, which comes up often around here due to Allison engineers deciding to put a "Master Control Unit" into it, shades of the FW-190, and making it an electronic computer dependent on 24 vacuum tubes.
I mean, seriously? Fortunately, the T-40 failed in all applications due to the unrealistic overconfidence of the mechanical engineers in charge of transmitting the engine's power to the airscrews before failing vacuum tubes could come to anyone's attention.

This problem clearly has nothing to do with the technology of turboprops in themselves. Airscrew problems doomed the Stratoliner, too. I would make a case against the turboprop if its only contemporary success was in the tiny Darts that powered the Viscount, an object lesson in not being too ambitious to start, but it is hard to argue with the C-130, which came along well before the decade was over. As with the other late-Fifties turboprops it was successful in military, not commercial service, but the point is that the planes didn't keep falling out of the sky with engine problems. (Actually, technically, they did. Engine and airscrew problems were factors for the Electra and early 130s, just as with the Britannia. But they were solved, damnit!)

Ultimately, the real problem with the turboprop conversions is that they weren't economical. No-one can afford anything. Heck, they can't afford the "Super DC-3!" They certainly can't afford the Comet after it begins to fall out of the sky. 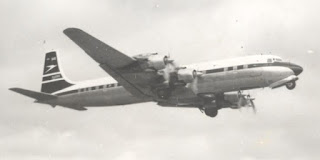 It seems as though the DC-7 is the last, or at least best, airliner the world will ever see. And even it, it turns out, was driven by a regulatory imperative for a plane that could fly across the United States in eight hours, the CAA's limit on flight duration. The need for a nonstop coast-to-coast led Douglas to order a plane built around the Wright Turbocyclone, reliability be damned, and that in turn led to the first London-to-New-York airliner. I suppose that all of the aeroengine enthusiasts who spoke up for the turbocompound in its time can take a victory lap on that one, but it is not like the power-recovery turbine was ever an economical proposition. On the other hand, if there's enough state intervention to mediate development, maybe one day all of our fiddling with shafts and bearings will lead to a turbofan, and then we'll be getting somewhere.

So there we have it as of 1950. Boeing and Lockheed are fiddling with jet transports, but both are, effectively, waiting for air force orders to make a production line viable. The Comet and Viscount are coming along, but they are both "socialist" planes.

And there is nothing else. Technological progress has just come to a halt. It's over, man. Unless someone comes along and saves us, we'll be back to starving in the streets in no time. The eyes of an anxious world turns to . . .

Well of course it's going to be Kim Il Sung who saves the world.