A Technological Appendix to Postblogging Technology, May 1950: "No Way Out"

Well, the UBC Library system has taken the perfectly reasonable and in no way money-saving step of extending its whole library-free university experiment into the Fall semester. Yay. Because, really, what kind of university lets its precious monetary fluids be sapped by researchers who seek to consume its essence? (Technically, the kids can get a book or two or maybe some photocopies if they ask politely a week in advance and it's not too much work, but alumni and other community users can go suck it. I'd recruit my nephew, but periodicals and other ephemera definitely count as "too much work.") 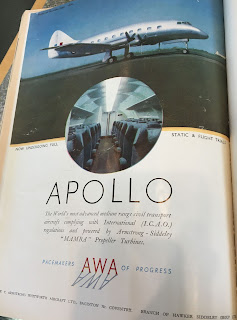 I will get on June, 1950 next week. In the mean time, there's a bit more to be said about spinning things. Because while I'm upset at UBC, there is still something to be said for looking at a project that you've gotten yourself into, and just deciding that it's too hard, and shutting it down. It might not be what we're told to do by children's programming television, but look how many lives Armstrong Whitworth must have saved by giving up on the Apollo!

In 1950's No Way Out, Sidney Poitier and Mildred Joanne Smith play nice Black hospital people who have to deal with a White racist criminal patient. Smith's promising career was cut short on 11 February, 1952, when she was aboard National Airlines Flight 101, a DC-6 departing Newark Airport, when, it suddenly began to veer left while losing altitude. Two minutes later, it clipped an apartment building and plunged into the ground, "narrowly missing an orphanage," says Wikipedia, and bursting into flames. Twenty-nine of 63 people aboard perished, along with another four from the apartment building. Smith survived, but with severe injuries, including a broken back. 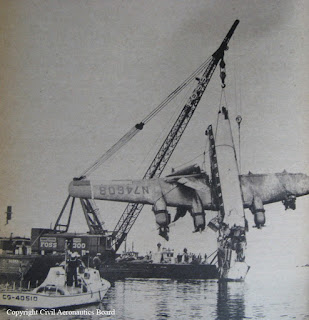 The CAB determined that the cause of the accident was the accidental reversal of the propeller of the No. 3 engine. Coupled with the crew's mistaken decision to feather the No. 4 engine, Flight 101 was pretty much a brick. This was three weeks after the crash of an American Airlines Convair 240,  with the loss of all onboard and two girls associated with the girl's school near which it crashed, and two months after the crash of a Miami Airlines Curtiss C-46 with the loss of all onboard, again with additional losses on the ground in spite of managing to crash into a warehouse district. Neither of the earlier two accidents go to  the subject of this post, which overworked postwar airscrews, turbines, rotors and closely associated spinning things, but they are a pretty good reminder of just how dangerous postwar civil aviation actually was. Having the propellers of a major airliner be subject to three separate Airworthiness Directives in four years, warning of separation of neoprene layers in the propeller core, overspeeding, and engine overheating issues doesn't help. (That's the Stratocruiser, if you were wondering. The poor British taxpayer just can't catch a break.) 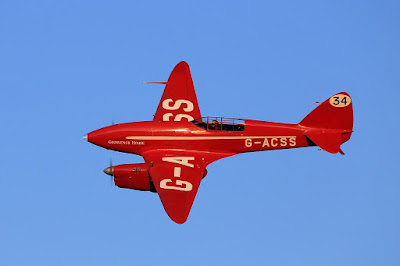 (By Woldere - Own work, CC BY-SA 4.0, https://commons.wikimedia.org/w/index.php?curid=35286083)
So Blogspot isn't supporting image captioning right now? That's fun. This beautiful aircraft is the De Havilland DH88 Comet Racer, built specifically to compete in the MacRobertson, or Great Air Race of 1934. The Comet Racer was an innovative aircraft in many ways, notably in using adjustable pitch propellers in its new Gipsy Six engines. De Havilland originally intended to use Hamilton-Standard hydromatic variable pitch propellers, but soon found that the blocky blade roots gave up more in drag and loss of airflow than the pitch adjustment gained. This kind of neglected drawback will be a bit of a leitmotif of the technology. (The Wikipedia article unironically notes that reversible pitch propellers are a later corporate success.)
De Havilland turned to a simpler but better-developed French design, and won the race. Probably more important to the later corporate history, it went on to found its own propeller division, at first manufacturing Hamilton Standard designs under license to compete with that classic cartel operation, Rotol. 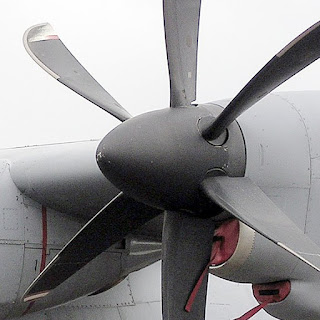 . (A joint venture of Rolls-Royce and Bristol, because why should you let the little guys get their beaks wet?)
The point I'm getting at  here is that these pioneer adventures in propeller blades that adjust, feather and even reverse are taking place in 1934, and 1952 is, if I count my fingers correctly, eighteen years later. Well, at least that's longer than the iPhone's been around. It is sometimes a little difficult to trace just when a given innovation was actually innovated. The Wikipedia article says that the first variable pitch airscrew propeller goes back to 1917, and I'll bet an old-timey Engineering writer could have dug up older precedents in ground installations. Lockheed put  Wright R-3350-749C18BD Duplex-Cyclones into the L-649, the first "real civilian" model of the Constellation, of which 22 were built and 14 sold to Eastern Airlines. This is presumably the reversible-pitch prop that was promptly wired shut. This might have been precipitated by the EAL Flight 611 incident, although CAB doesn't specifically attribute the propeller failure to the reversing feature.
From our time-bound perspective, the next major rotor failure story is that of the Cierva Air Horse, the first prototype of which will crash on 11 June 1950 (Spoilers!), with the loss of the development team. The Air Horse is powered by a single Merlin engine, which is quite a lot of horsepower for a circa 1950 helicopter, although I don't know how much that matters when the engine drives three separate rotors through three separate driveshafts, rotorshafts and rotor hubs. I've resorted to exasperated parody in discussing Flight's technical articles on subjects like the Air Horse and the equally elaborate bits of mechanical engineering that connect turboprop propellers with the spinning parts of the turbine engine, which, you will recall, outputs gas under pressure, and not a twirling shaft for direct gearing to a prop. the language is obscure and the specialised knowledge required to follow it not all that common even in mechanical engineering. They certainly put the problems in my old Physics 225 class in perspective!
With the Air Horse, though, you can steer clear of the gadgets that connect one shaft to another at various angles and freedoms and focus on the fact that you have three of them, and that a failure of any one of them will cause the catastrophic loss of the helicopter. Which makes the Air Horse --bear with me, I'm no mathematician!-- three times as dangerous as a single rotor helicopter? (Trick question: It's infinity times more dangerous, because it can't auto rotate to the ground.)
I'm still a little flabbergasted that Lord Weir backed this deathtrap. At least it was Howard Hughes behind the XH-17 ("Melts the rotor drive from the inside without necessarily thrusting the outside!"). He had an excuse, what with the being crazy and all. Lord Weir is supposed to have been this organisational genius behind Britain's war effort.
Speaking of coupling the power bits with the propeller bits, we have our old friend the Britannia, which suffered a serious developmental delay in 1954 with the loss of the second prototype to a reduction-gearing failure.  The reason that the loss of a single engine would cause an emergency ditching in the Severn mudflats is, I presume, that the prop was running away and threatening to tear the engine out of the wing, which would be bad for structural integrity. By this time the stunningly high accident rate un early development Westland Wyverns might have suggested some caution, although the Britannia was actually stiffed by its icing problems, a serious issue for early turboprops, but especially ones with reversing airflow, like the Proteus. It is a little surprising that the Double Mamba Gannet (and Viscount) had such a good record. This, it strikes me, is likely due in part to the fact that less powerful engines put less stress on vulnerable propellers.
As we've seen, the teething problems of high power propeller-train installions were eventually solved. Another early turboprop, the Lockheed C-130 is probably the best evidence of this, 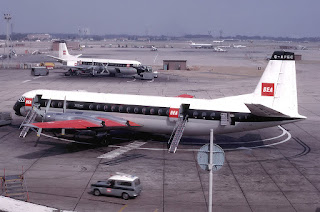 although I could also point to the Vickers Vanguard. The tedious moral of the story is presumably about learning by doing. Mecahnical engineering had no doubt about its ability to deliver rotating-blade propellers in 1934, but it turns out that the devil was in the details, and that people would still be dying of their mistakes in 1952. That the problem was solved has to be explained by someone's patient underwriting of a long struggle to learn to build these systems by building them. The most obvious beneficiaries of mechanical engineering's long struggle to create reliable load-bearing systems that spin at tens of thousands of rpm  are probably helicopter manufacturers, and they are also wear I would look for practice making perfect.
So as has been a theme in these intermonth posts leading up to June of 1950, I am going to   tentatively suggest that we pay close attention to this whole "helicopter" thing as it comes up in the next few months.
Posted by Erik Lund at 5:28 PM