The North American F-100 Super Sabre was the first of the Century Series fighters, although the design had a shorter path to production than the F-101 and F-10s, both of which originated in responses to late Forties USAF requirements. The F-100, in contrast, was an unsolicited design proposal submitted in January of 1951. Perhaps understandably, the "Fokker panic" currently being experienced over in MiG Alley inspired fast work on everyone's part. On the other side of the curtain, the MiG-19 was ordered in July of 1951 and first flew in September of 1953.  So the first flight of the F-100 prototype, at the end of May, 1953, and seven months ahead of schedule, came none too early. After that, air forces of East and West alike dealt with growing problems as MiG-19s blew up mysteriously in mid-air while the F-100 gave us that ever-amusing joke about the "Sabre Dance" thanks to its yaw instability, only the most spectacular in a range of instability problems, from which the MiG-19 was hardly spared.

The aerodynamic problems don't need to be explored any further here, much less the rival Russian programme, because today's post is about titanium and Marinette, Wisconsin, home of the Ansul Chemical Company, manufacturer of Met-L-X Dry Powder, a fire-suppressing powder that

[M]ay be used on sodium, potassium, sodium-potassium alloy, and magnesium fires. In addition, it will control and sometimes suppress small fires on zirconium and titanium;"

And Lith-X, another fire suppressant, which 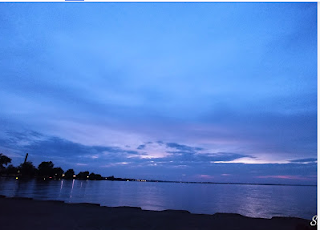 "[W]as developed for use on lithium fires, and will also suppress magnesium, sodium, and potassium fires. LITH-X agent will contain, and in some cases completely suppress fires of zirconium, titanium, and sodium-potassium alloy."

About Marinette, I hard know what to say. I have just scrolled through all fifty or so photographs posted to Google Maps. Forty-eight of them were taken on the lakefront at Ann Arbor Park, of which two each are shot back at downtown or the mill; more than half are of the lighthouse, and there is one picture each of the city park and the museum, featuring exactly one building, the museum. (Bet you didn't see that coming.) Marinette seems to be the least interesting part of Marinette. 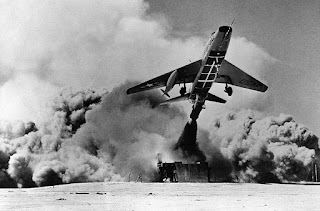 Titanium is one of the lighter metals, at atomic number 22. Metallic titanium has a very high melting temperature and the highest strength to density ratio of any metal, unalloyed titanium being as strong as mild steel. Given that it is the ninth most common element in the Earth's crust, admittedly behind aluminum and iron but well ahead of copper and lead, you might guess that its recent and limited use as a structural material has the same sort of chemical causes as aluminum, Specifically, titanium dioxide is by far the lowest energy form in which titanium is likely to be found on Earth, and titanium metal is very enthusiastic about getting back to that state. At one atmosphere pressure, titanium will ignite at 33 degrees, but if heated quickly enough, can catch fire at temperatures as low as 300 degrees Celsius. It burns at 3300 degrees Celsius, and the linked article describes a titanium fire in a jet engine as a very brief event of 40 seconds or so. One presumably does not want to be around when any larger quantity of titanium (such as the airframe of an F-100) catches fire. Innocent of the very different mores of the 1950s, the author piously suggests that when the first jet engine containing titanium (misidentified as the "J77," in fact the Pratt and Whitney J57, very closely followed by the Bristol Olympus) was introduced in 1954, no-one had thought of the possibility of a titanium fire. The appearance of the first news of Met-L-X in the 1 January 1951 issue of Aviation Week suggests that people were not, in fact, unaware of the possibilities of a new-fangled metal fire.

In the event, the use of titanium in aircraft structures has been a bit less extensive than Mr. Loening was predicting. The main use of structural titanium was in supersonic aircraft, something of a passing fad even in military applications, at least before the development of supercruising. It is used in highly stressed parts like landing gears and flaps, and even skinning in some areas, but the lavish use of titanium skin is associated with the supersonic transports and bombers of yesteryear.

All of that was still ahead in 1954. Pratt and Whitney spent most of the decade struggling with the problem of hydrogen embrittlement in the titanium fan blades of the J57.  I am not very clear on the earliest appreciations of the fire risks of titanium, as the early history of titanium is in the hands of engineers, and is awfully vague. The commercial production of titanium was made possible by the Kroll process, discovered "around 1940" by William Justin Kroll of Luxembourg, although in fact Kroll took his first sales trip to the United States in 1938, showing samples of titanium metal. The "about" reflects a US patent issued on 25 June 1940, by which time Kroll was nominally employed as a consulting engineer at Union Carbide. The patent was seized by the US government as alien property at the outbreak of war, which doesn't seem really fair, although he got it back in 1948, by which time du Pont de Nemours had commenced commercial production. (By which time Kroll was working on a zirconium.) The Kroll Process is extremely exciting chemically, involving reacting titanium chloride with molten magnesium to yield titanium metal and magnesium chloride. The process for producing titanium chloride from titanium oxide also sounds quite exciting, involving reacting ilmenite (an iron /titanium oxide) with carbon under "flowing chlorine" at 900 degrees Fahrenheit. It is all the more amazing that this had already been discovered by the paint industry, which wanted to use titanium to make a better class of white paint than was already possible with tin.

I continue to be amazed and also little appalled by what the old time chemical engineering industry managed to accomplish, and that our natural environment survived it all, knock on wood. 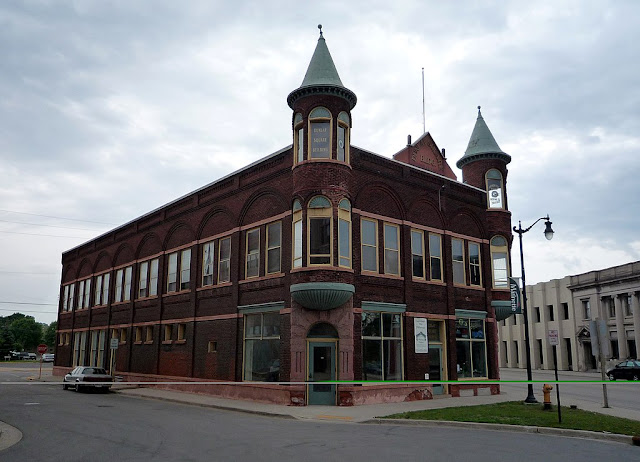 Speaking of wood, Marinette is an old lumber town, and reached its greatest size, at 16,195 people, at what the Wikipedia article deems to be the peak of the lumber boom, in 1900. Dunlap Square Building  is a "2-story commercial block designed in the Queen Anne style," and was erected in 1902, and is in fact, an early victim of the slow ebb tide that brought the town's population down to 14,610 by 1910, and to an estimated 10,539 in 2019.

Considering that Marinette is an old fur trade post and the seat of Marie Antoinette Chevalier (1793--1865), "Queen Marinette" of Green Bay, I am dubious that the Dunlap Square building is the most historic thing in Marinette, but I am not in charge of the National Register of Historic Buildings, and, anyway, it seems as though the nearby Fort Stevenson Museum covers the fur trade days, and a gloomy picture of a building erected just as the tide began to ebb, and which remains, picturesque but under used, today, is probably a better representation of what Marinette is today.

Most housing in Marinette was constructed during the decades of the early 20th century. More than half of all homes (53%) were built before 1950, with a plurality of those (45% of all homes) having been built prior to 1940. These numbers are about twice the rate of older homes in the rest of the state of Wisconsin. The median value of owner-occupied housing in Marinette is $58,100, compared to the state average of $112,200.[31] 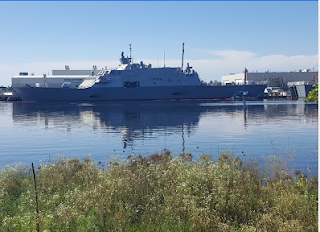 The crazy thing about this is that Marinette still has a major pulp mill,  a shipyard that is going to be heavily involved in the USN's new frigate programme, a foundry, a boiler maker, an  automobile parts plant, and, of course, Ansul, or, as it has been since 1995, Ansul/Tyco. Ansul sold off its refrigeration and air conditioning products division and narrowed production to just firefighting products. Your average British Columbian pulp mill town would kill for that kind of industrial diversification (although not for Ansul's impressive reputation as "one of the dirtiest/worst facilities in the US for cancer risk.") It's smaller than Powell River! A great deal of that is presumably due to people commuting to work so that they don't have to live in a pulp mill town, but that's not much of a consolation for those stuck in the aging housing stock.

All that said, Ansul's reputation is mostly due to a stranded accumulation of 95,000t of arsenic salt from its herbicide-manufacturing days, from 1957 to 1977, and not the production of fire retardant chemicals. The magic ingredients in Met-L-X and Lith-X are salts and caking agents, practically innocuous compared with what has come before. There's no particular reason why, if there were titanium-clad SSTs whizzing about in large numbers, the Ansul plant couldn't be expanded without poisoning Marinette.

I suspect that the same cannot be said of those who manufacture structural pieces of "zirconium . . .  and sodium-potassium alloy. Both Zirconium metal  and sodium-potassium alloy find their main uses in the nuclear industry, including, in the latter case, as a "hydraulic fluid in high temperature and high radiation environments," including apparently the Supersonic Low Altitude Missile of 1955. There are also some boring chemical applications as a desiccant and a catalyst for production of ibuprofen. 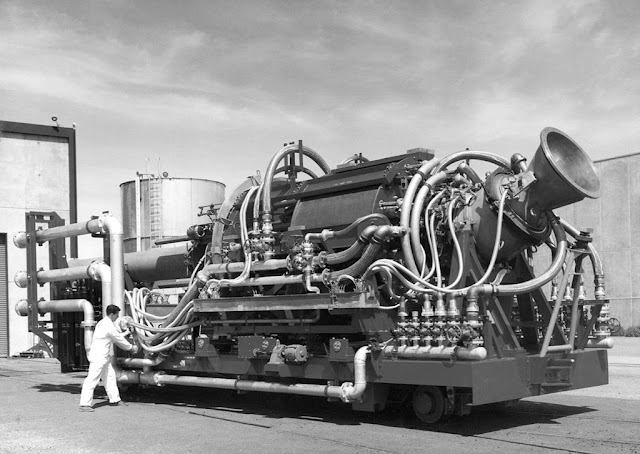 Aren't you glad they had a fire extinguisher before they went and tested their nuclear ramjet? I'm also a little nonplussed by the Wiki, which claims that SLAM was going to be guided to its garget by a terrain contour-matching radar system set to navigate to preprogrammed targets --but that the nuclear ramjet engine was the "primary innovation." Because in practice the nuclear ramjet turned out to be a lot easier to build than the automated pilot!