The Bishop's Sea: Our Ongoing Project of Building a Better, Stronger Past 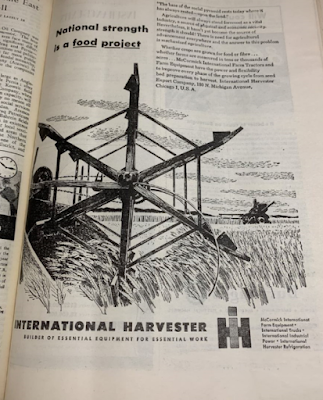 This may or may not be on me, but it turns out that I don't have Sunday off. I suspect that after wasting far too much time trying to make iOS and Onedrive get along, I was not going to get a postblogging post up tomorrow anyway, but it sure isn't happening now.
I don't, however, want to leave the blog silent, and it occurs to me that I haven't written about the Columbus problem, either as it is traditionally understood, or as historiography seems finally prepared to confront it. 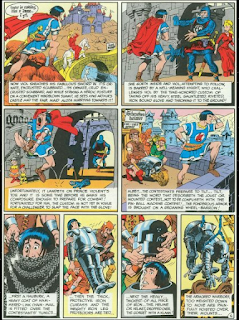 If all we wanted was the story of  the impact of Christopher Columbus, this wouldn't be much of an exercise. Columbus was yet another Italian condottierre ("conductor," in the sense of "enterpeneur") who got backing for a speculative venture from a Western monarch in 1492. These guys are absolutely a dime a dozen, doing everything from raising regiments to building breakwaters to painting portraits. 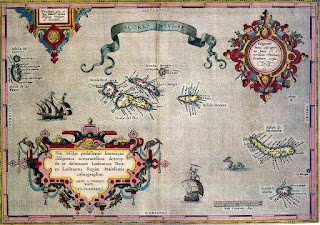 Columbus was a very good sailor, like many heroes of popular novels of knight errantry, who were certainly the role model for a youthful Columbus. (I hereby apologise to literary studies for appropriating their precious Emergent-Middle-Class-Art-Form-Except-For-All-Those-Exotic-Novels-Academia-Has-Retroactively-Authorised) of knight errantry. His proposed adventure was to sail westward from islands owned by that monarch to find new lands, again a well-worn sort of scheme. The particular details of the voyage were framed by the existing agreement with Portugal. To avoid Portuguese poaching and a conflict that Ferdinand and Isabella definitely did not want with the succession of Naples in the air, Columbus needed to find those islands in the same latitude band as the Canary Islands, something that previous voyages had not yielded. However, the latitude band stretched indefinitely westward to furthest Asia, and ",any people were saying" that a voyage all the way to the Indies was a practical thing to do. (Bishop De Las Casas recounts that Columbus saw some Asiatic corpses washed ashore on the island of Flores, for example.) 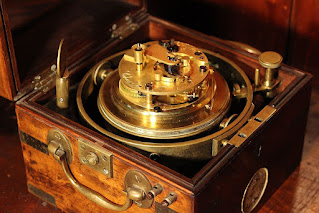 Columbus was unable to keep to a latitude track, and so arrived on the shores of a mountainous island well to the south of the Canaries. Firmly located in the tropical rain belt, like the highlands of Guinea, both a contemporary and a modern geologist might suspect would yield placer gold, even if the locals did not wear gold jewelry. Placer mines worked originally by Spanish convicts were yielding a million pesos annually by 1512, says Hugh Thomas.  Columbus then returned to Europe via the Portuguese Azores and Lisbon, which was not exactly ideal. A treaty that recast the respective Spanish and Portuguese spheres of influence in the Atlantic on longitudinal lines seemed called forr. This, while not technically practical, was sufficiently in the interest of  the Aragon/Castile codominium and Portugal, that it was duly negotiated in 1494. Since when has science been allowed to get in the way of progress? By this time Columbus had returned to his discovery with a massive fleet and perhaps 1200 colonists, keen to relieve the men he had left there late in the previous year
If, as would now appear, there were fewer than 50,000 Tainos on the island of Hispaniola practicing a mobile lifestyle of hunting, gathering, landscape curation and gardening, it is hardly surprising that they were unable and unwilling to feed 35 European layabouts, and, given his urgency, it is unlikely that Columbus was entirely surprised to learn that they were all "cut off." Whether they were all actually dead is another question --right from the beginning we are faced with the problem of totalising narratives trying to write biographies. People don't generally like dying, and do their best to avoid it. I'm not saying that these guys were in much of a situation to avoid it, but it isn't as though we know.
Columbus then tried to set up a colony with one hand while pushing forward with his explorations on the other. Cuba looked like a good place to explore, unfortunately since a voyage along the Cuban shore led him directly away from the urbanised areas of Mesoamerica that were not actually that far away, although he would have had to practically round Yucatan to reach even the northernmost outposts of urban civilisation in the north of Veracruz state. The voyage was interrupted by initial difficulties with the settlers, and Columbus returned to the Spanish court to defend his reputation against those who characterised his discovery as an island of hunger. 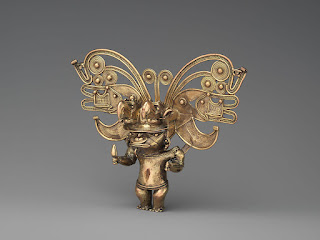 It is likely that it was in the period between his March 1496 return and his next voyage of 10 March 1498 that Columbus did the self-directed geographical research from which he derived his outlandishly incorrect estimate of the size of the Earth, and not before 1492. His understandings prior to his first voyage were much more pragmatic and practical. It was, likewise, in these years and in the context of the developing conflict over Naples that the learned world first formulated its view that he had discovered a "New World," although it did not  hurt that the Crown authorised limited independent expeditions to the area, and here again the totalising narrative loses control of individuals, as exemplified by the controversy over the career of Amerigo Vespucci. Columbus' third voyage brought him the north coast of South America and pearling grounds off the north shore of Venezuela which were soon the second-largest revenue source for the Crown's New World monopoly. After further and entirely typical conflict with the locals, Columbus was sent home in chains, again and I cannot emphasise this too often, a perfectly typical flourish in a perfectly typical crown-colonist-adventurer conflict.
Columbus' fourth voyage reached the limits of North America on the rainswept coast of Honduras and his own. While Columbus' run of successes and his ability to avoid mutinies, shipwrecks and maroonings stretches all credulity when compared with his contemporaries, this was just too much. He returned to Spain, wealthy on the family's negotiated share of the royal tenth, and puttered eccentrically through the few years left to him. 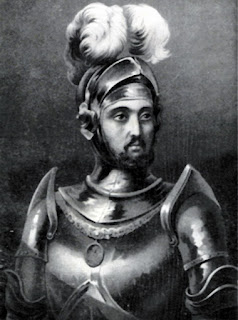 Email ThisBlogThis!Share to TwitterShare to FacebookShare to Pinterest
Labels: Gathering the Bones, Goodbye to the Vikings?, No Radio News Because of Work Schedule Changes Again, Pirate History of the Atlantic