The Bishop's Sea: Floating Proletariats and the Development of Underdevelopment 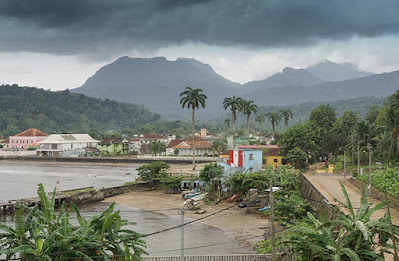 Sao Tome and Principe is an island state off the equatorial coast of Africa with an area of 1000 square kilometers, a population of 211,000, a GDP per capita of $1668USD and not much else to say about themselves. They were allegedly uninhabited when the Portuguese arrived around 1470, and in 1499, Felipe Fernandez Arnesto reports, the captain, Pedro Alvarez, wrote to complain about a shipment of new arrivals, Jewish orphans deported from Lisbon during the expulsion. There were, the Captain reported, only 50 colonists on the islands, mostly exiled criminals themselves, working a marginal sugar plantation, without a mill to support exports. They had no truck to trade for ivory and pepper on the mainland, little food, and had great difficulties securing wives. The rest of the islands' five century history isn't that much more interesting, although the implied mixed-race community (thoroughly dominated by first-generation Portuguese) did emerge during the next century. 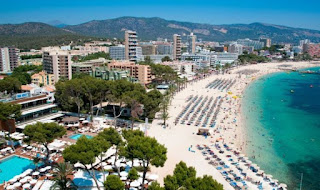 As a Canadian and a UofT man, I associate the "development of underdevelopment" with Harold Innis' "staples theory," phrased in these parts as asking why British Columbia has forests, logs and mills, but not IKEA. The question of how the long-term development of "the West and the rest" became, of course, ever more pressing in the decades after Innis' death. By the time that Joan Robinson addressed the question in 1978, the state of Africa was frequently presented in apocalyptic terms --that was certainly my high school experience-- and although the worst has not happened there, we have the current state of Haiti to remind us that the Third World is still with us.

Comparing skyscrapers on the beachfront of Majorca with rustic lodges on the shore of Sao Tome announces that someone thinks that these are parallel cases (that person being Felipe Fernandez-Armesto). If we can figure out what is different between one pre-Columbian "empire" and another, perhaps we can unpick this little problem of global underdevelopment. It hardly seems too modest an objective for a single blog post.

Majorca was conquered by Jaime I of Aragon in 1229--31. In Before Columbus, Fernandez-Armesto characterises the campaign as a chivalric adventure, but also an extension of Aragon's claim to be the successor of the Almohad dynasty, which had re-established Muslim imperial control over the Balearics after a century or so of independent taif status. The conquest is both well-documented and well-chronicled. We have both land books and narratives of the mass expulsion of the Muslim inhabitants and the enslavement of the rest. Just how extensive the expulsions actually were, and how long the enslavement lasted, are contentious points given names surviving in the documents, but the subsequent conquests of Ibiza and Mallorca seem to have seen more extensive repopulations by these mechanisms. (Which might explain why they were comparatively unsuccessful.)

After the better part of a century of relative independence, Majorca was brought back more firmly under the Aragonese crown, and became the launching pad for an attempt to build a Mediterranean empire that, in the face of a Sardinian quagmire and Sicilian particularism, bore comparatively little fruit. Fernandez-Arnesto compares this failed empire with a parallel Genoese effort, and picks out the relative lack of a role of a state. Taking all these pre-Columbian empires into account, one wonders if it was the state that built the empire, or the empire that built the state? 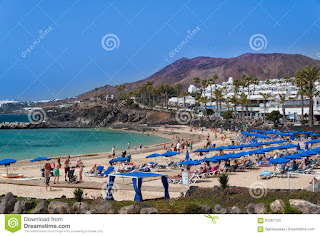 Moving on down to the Canaries, Fernandez-Armesto introduces us to the archival state of the art as of 1987. (It is a bit alarming to see the great historian comparing the past to the current state of the Soviet Union's relationship with "Turkmenia.") We have the traditional voyage to the Canaries of Lanzarotte Malocello, sometime before 1339, perhaps in 1312. Unless it is an unlikely coincidence, he is the Lanzarotte who died there decades later, defending a little taif from a tower above Teguise on the island of Lanzarotte against locals and Castilians alike. For some reason we find more archival clarity in 1341, when four Franciscan brothers in a Majorcan monastery in the tradition of Raymond Llull receive a license for a voyage of evangelisation and exploration there.

A lost decade of archival material obscures what happens next, but this Majorcan and Llullian interest is still active in the 1350s. By the early 1400s, Lanzarotte's old tower is a picturesque ruin in the scarcely more  imposing fiefdom of Gadifer de la Salle, somehow subject to the King of Castile, who receives a petition from the inhabitants of the islands. They would like the King to appoint a notary to intervene in a rent dispute with their overlords, for, they say, the land is poor  and unhospitable, and they are largely dependent on their goats. (At the same time the main voluntary exports that the still-unconquered islands are cheese and hides.) Apparently the only thing that Lanzarotte produces in any quantity is provisions for ships. The "round ships" of Genoa are by now plying the islands, and seem to take on large quantities of provisions in order to make long excursions to find good winds, and even longer runs before them, perhaps running into the Azores and Madeira in the process. But is that the whole story?

We can skip lightly over what happened next as a matter of the received history of the Canaries and just note what Fernandez-Armesto considers interesting, which is that the pre-Columbian history of the Atlantic in the Canaries is only barely pre-history. Columbus could not sail from Gomara until the suppression of its last native rebellion in 1488, and while he was sailing, an odd document records a negotiated treaty between the Spanish on Tenerife and a native king, indicating that the indigenous population was still capable of acting as a political unit in 1492. The Canaries, with the exception of their easternmost, driest and poorest islands, were hardly further down the path of development than the Greater Antilles islands that Columbus was about to discover. Like the Greater Antilles, they are afflicted with a mysterious, disappearing population, but given what we now know about the small size of the Taino population in the Caribbean this seems like a mystery about the Canaries, and specifically those easternmost, semi-arid islands of Lanzarotte and Fuerteventura, which were evidently depopulated a century before the wetter central and western islands.

So far, the stories of the island empires hardly differ one from the other. There are ambiguous relations with locals, a recurring problem of disappearing, and sometimes reappearing populations, a perennial difficulty in finding immigrants willing to settle the new lands. When kings take an interest, their logic is agreeably progressive. While interested in sugar plantations, they constantly exhort the building of towns, the import of artisans, the development of a balanced agriculture, allowing for a certain last-century bias in the secondary sources against the pastoral modes of production that, after all, support industry through textile production.  None of this suddenly changes when the focus of the Catholic Majesties wanders over the hemispheric boundary and considers what Columbus is trying to build on Hispaniola, Cuba and in "Darien." Towns, artisans, yeoman farmers, herds, and, yes, sugar. Where are they?

Taking failed empires of the sea into account, you can either shrug, pronounce racialised theories, or turn to your preferred idee fixe. Slavery aside, it is not obvious where the money is in early voyaging to the Canaries. Or, rather, it is blindingly obvious where it is, and I cannot help wondering why more isn't made of it. The  northwest coast of Africa has a flourishing commercial fishery today, and while sea fishing isn't a characteristically Neolithic industry, fish attract seals, and sealing is most definitely a subsistence practice that crosses over into a luxury trade. The focii of precocious Atlantic development, from the Lofotens to Iceland to the northwest coast of Morocco to Arguin to the Canaries to the Grand Banks, is fisheries.

If a largely invisible floating proletariat of sealers, fishers and processers precedes the colonial "success" of one maritime empire after another, what is it that they supply? I am going to suggest that the missing ingredient in all of our state-ordered narratives of successful nation building in the Western Hemisphere is missing one crucial element: demand.  If no-one wants to eat the produce of your pioneering farm, there isn't going to be a farm. 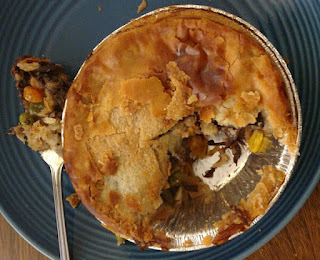 If, and I offer this suggestion with all the cynicism of a life in the trenches, economic theory is determined to ignore the economic role of consumer demand enabled by a high income share, we can perhaps understand how the development of underdevelopment became such an intractable problem.

Email ThisBlogThis!Share to TwitterShare to FacebookShare to Pinterest
Labels: Blue Plate Specials, Gathering the Bones, Goodbye to the Vikings?, Old Europe, Pirate History of the Atlantic