The Bishop's Sea: Seals and State Collapse in the Pre-Columbian

So after eighteen apocalyptic months, UBC Library is open this week, and while I did not visit my precious old journals, because of pure laziness, it turns out that I wouldn't have been able to see most of them due to the usual robot uprising.

Damn. Should have gone with that instead of copping to being lazy.  Anyway, going to lean on the door marked "seals" and see where it takes us!

With Columbus we get coordination between the hemispheres at last. That does not mean that we can rule out a species of convergent coincidence in the years leading up to the voyage of the Admiral of the Ocean Sea. Apart from climate change, lately the go-to explanation for all historic change, there are things in this world that do not respect the interhemispheric divide that Columbus so decisively broke. 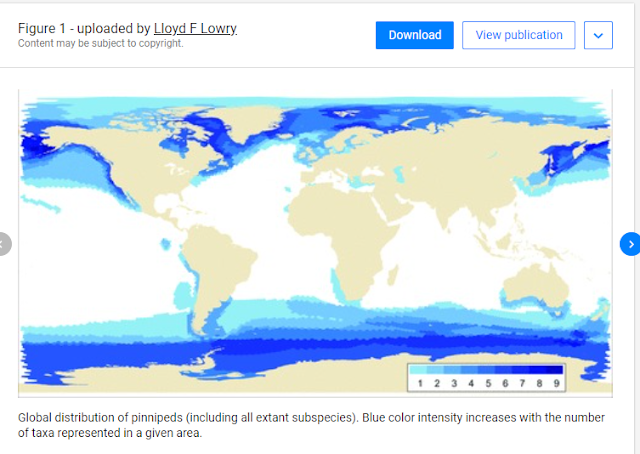 Such as pinnipeds. This much-scraped image ultimately draws on the International Union for the Conservation of Nature's work preserving still-surviving populations, and so misses at least one substantial extinct population of some interest to this post. Modern pinniped populations are confined to near-boreal waters with the exception of zones of cold upwelling, pre-eminently the west coast of the Americas, Macaronesia and the Moroccan coast (substantial populations of monk seals off the Western Sahara and Mauretania have become extinct in recent times), and Namibia. These are also, and probably not coincidentally the main areas of human-pinniped conflict due to either residual fisheries, as in Canada, Japan and Namibia, or frustrated fishers shooting seals, as in Canada, Namibia and, well, everywhere, actually. Except maybe Japan? I've heard they're a bit weird there. The relict Mediterranean monk seal populations make an outsized impression, but one has to wonder if there are cases of local monk seal populations becoming extinct in the Early Modern period with less notice than the Caribbean monk seal. 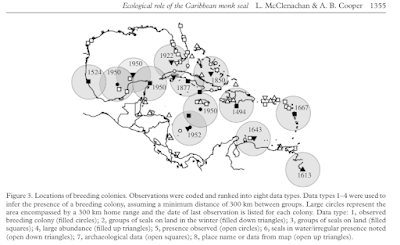 McClenachan and Cooper's work does not really establish the size of the monk seal population, which we know was large enough to support a Contact-era seal hunt because it only became extinct under heavier hunting in the Nineteenth Century. The reason they take so much care to establish a Contact-era population in the half-million range is to contribute to the ongoing conversation on the role of seal-hunt bans on commercial fisheries. No, they say, the seals didn't eat your fish. On the contrary, in their role as apex predators, they kept coral reef habitat biomass production at a substantially higher level than current. Seal culls and seal bounties aren't going to help.

The close genetic similarity between the Hawaiian monk seal population and the Mediterranean is an argument for relict populations in the Western Pacific and Indian Ocean, as at the very least Mediterranean and Red Sea/Indian Ocean/Pacific dugong populations are apparently closely related. 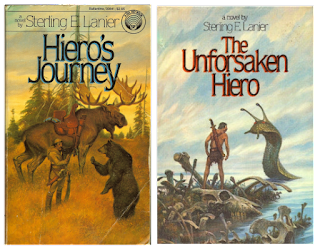 The Caribbean monk seal extinction is a pretty big deal, as otherwise there are no historic cases of tropical marine mammal populations becoming extinct, although the Mediterranean monk seal is on the cusp. So the sources have been trawled pretty thoroughly, and McClenachan and Cooper report that Columbus took eight seals on the south coast of the Dominican Republic, while Juan Ponce de Lean took 14 in 1517 in the Dry Tortugas. The source material isn't handled particularly, well, with the authors relying on a popular life of Columbus from 1950 that is extremely unlikely to have been appropriately skeptical of Ferdinand Colon and Las Casas' handling of lost Columbian material. On the other hand, this would be the second voyage and maybe it is an editorial addition drawing on Michele de Cuneo's letters. I am not putting this post on hold while I track down "F. Colon [1959], The Life of Admiral Christopher Columbus by his Son, Ferdinand (New Brunswick, Canada: Rutgers University Press)." Not to worry guys, I think most of us have put Rutgers University in Canada at some point. It doesn't make you bad marine biologists. If the good burghers of New Jersey didn't want us taking credit, they should have renamed the place when they had the chance! (Looking at you, Vancouver, Washington.)
The same concerns about the reliability of the Columbian industry implicate the claim that the Serranilla Bank was known for its seal population as early as a 1510 map. It may not be a 1510 map, and for that matter it  may have been forged for Alexander v. Humboldt if it is the one I'm thinking of. This is fairly important because of the location of the Serranilla Bank, which is the rookery between Puerto Rico and Yucatan, and breeding grounds of the populations hunted along the Yucatan coast.
Seal populations are not transatlantic (as far as we know), and neither were sealers. And yet. . .
The high medieval era saw an extraordinary flowering of Atlantic-facing new states. Their historiographic fate has varied: The Lordship of the Isles is the most romantic thing ever; the Norwegian monarchy is seen as an epilogue to a more glorious Viking era; the Almoravids and their Almohad successors inspire full-blown Islamophobic panic; Muhammed ibn Gao's attempt to push Malian influence into the maritime realm is known only from a bare description. It is my inference that it was a c. 1310 northward exploration that came to grief in the Arguin rather than the oft-speculated attempted trans-Atlantic exploration. Be that as it may, there are enough details about attempted connections between Andalusia and West Africa in Ibn Khaldun for us to take it as more than a brainstorm of the house of Vivaldi.
But, okay, one more. We know a bit more about the political scene in pre-Columbian Yucatan than Mali. The Mayans worked in stone (and apparently) concrete, and the Mayan intelligentsia made a heroic effort to capture the "things of the Maya," not just as Bishop Diego de Landa's informants, but as authors of the Books of Chilam Balam, the Ritual of the Bacabs and the Songs of Dzitibalche. 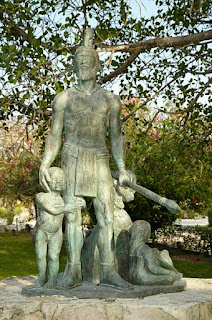 You can tell I was impressed by the persistence of the Mayan tradition when I  half-assed it earlier in the week. But the point is that this work turns on a degree of parochial pride for the accomplishments of the city/republic/confederation/tyranny of Mayapan, which according to these sources overthrew the hegemony of Chichen Itza under the leadership of Hunac Ceel sometime around 1200, only to fall to internal dissension in 1441. Mayapan's Yucatan-based confederacy extended a trading link with Honduras via coastal stations and salteries that produce some of the most significant modern Mayan archaeology. This detail is also anchored in the traditional narrative, since the coup that annihilated the ruling Cocom family and precipitated the fall of Mayapan occurred while a dynastic refounder associated with the long anti-Spanish struggle of Chetumal province  was away in Honduras trading.
Mayan trade is an important part of the peri-Columbian narrative, since the Spanish encountered Mayan trading canoes well before they became aware of the urban civilisations of Mesoamerica. Just how hegemonic Mayapan might have been, and when exactly it fell, are probably moot points. What matters  here is that our scanty evidence of early sealing activity points to an uncontrolled Mayan-Hispanic interaction sphere, of which we were in any case aware thanks to the story of Gonzalo de Guerrero. 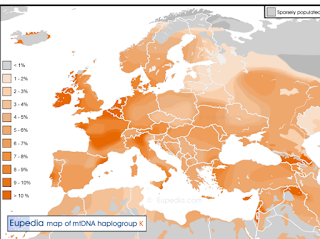 At this point we can put together some stories about migration and depopulation. The Scottish case is the simplest, since we have language and place name evidence indicating the same pattern as identified by the Fisheries Society in the Eighteenth Century. Gaelic speakers migrated from west to east because they made more money in the North Sea fisheries than they did crofting. The Norwegian case is a bit more mysterious since the received story is of an outflow from Scandinavia to the Atlantic islands, while the distribution of mtDNA suggests that the actual population outflow was from Ireland and the Western Isles towards the isles and western Norway, and the establishment of distinctly different populations in the Norwegian west and Trondelag, mirroring the ongoing conflict between the kings and the Earls of Lade. In Morocco, we have political history rather than demographic. The centres of royal power move northward from Marrakech to Fez and its vicinity, and stay there for quite a long time. 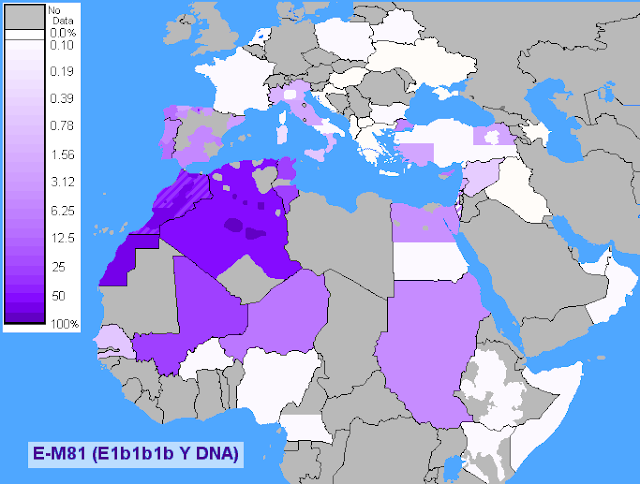 Mali, or the Guinea coast in general, is notoriously a demographic source on the largest scale for this entire period. I don't think that the causes of its extraordinary fecundity are well explored, being taken as something that just happened.
Finally, we have the problem case of the Americas, where we place a large population and then eliminate it, unless, like David Henige, you think that this is all sandcastle building. If the DNA evidence is taken to suggest that the Caribbean First Nations population remained constant over the Columbian period and disappeared largely due to hybridisation, then it is a bit of a mystery where the Admiral got all his slaves from, although I can't for the life of me see why the Taino wouldn't have undertaken slave trading with traditional partners in Yucatan, South America and Florida on their own account. The Caribbean middle ground is not well-reconstructed, and what little we know of the colonisation phase in the Canaries suggests that Richard White's concepts might apply there, too. We have lastly the question of where the people went. Seaver, before she goes off the rails, intuits that they were absorbed into the Atlantic salt fishery, an intuition that holds for Scotland and the Arguin. In the former case we can see people moving. In the latter our best available evidence for the origins of the African slave trade paints the Portuguese as specifically victimising coastal fishing populations. Throw in the collapse of the Greenlandic population, presumably migrating to Bristol rather than "Vinland."
These are small populations and tentative state orders, evidently vulnerable to outside shock. It is very hard to imagine a medieval Norwegian monarchy hanging on after the Danes managed to impose the Sound Tolls. How do you compete with a rival power that has all the money in the world? We have a historic case of sociopolitical collapse in the Western Isles to compare with more obscure events in the 1300s (and 900s?), and the brute fact of the change of dynasties in Morocco. The odd case is Yucatan. Was the region consolidating in the 1400s, only to fracture out of internal political dynamics just in time to receive the Spanish? It would be quite the coincidence! The bare-ass hypothesis is that seals disintegrate, fish reintegrate.
Posted by Erik Lund at 4:19 PM

Email ThisBlogThis!Share to TwitterShare to FacebookShare to Pinterest
Labels: Goodbye to the Vikings?, No Radio News Because of Work Schedule Changes Again, Pirate History of the Atlantic, Plantation of the Pacific