(Cribbing from Wikipedia again: The Port of Cherbourg, circa 1944. Romantic haze courtesy of DuPont Nemours.


Clifford Sifton had a way with words. Brandish them like a boss--

“When I speak of quality I have in mind, I think, something that is quite different from what is in the mind of the average writer or speaker upon the question of Immigration. I think a stalwart peasant in a sheep-skin coat, born on the soil, whose forefathers have been farmers for ten generations, with a stout wife and a half-dozen children, is good quality.

....A Trades Union artisan who will not work more than eight hours a day and will not work that long if he can help it, will not work on a farm at all and has to be fed by the public when his work is slack is, in my judgement, quantity and very bad quantity. I am indifferent as to whether or not he is British-born. It matters not what his nationality is;such men are not wanted in Canada, and the more of them we get the more trouble we shall have.”

Patriotic Canadians typically quote the first part, and usually slip a "Galician" in front of "stalwart peasant," and let the last bit slip Wilfrid Laurier's Liberals weclomed Ukrainians, you see, whereas Borden's Conservatives would soon put them in internment camps as enemy aliens, so forgive the then- Minister responsible for immigration for his union-bashing, because it could be worse. Forgive him, too, the cringingly old-fashioned and naive idea that a large population of hard-working consumers could be a source of national strength, where we now know that they only really contribute if they are sinking serious coins into private pension plans heavily into hedge funds. There's nothing like "a half-dozen children" to eat up the RRSP contribution!

The point here is not to dig up the economic fallacies of ages agone. It is to explore a forgotten age, when stalwart peasants in sheepskin coats wanted to go to Canada (or America. America's good, too), and could pay for it. Obviously the Canadian Pacific Railway was into it, big time. They had railways and liners and they served the lands that said stalwart peasants would farm, exporting their grain and importing their Sears Catalog socially signifying status goods via the CPR. But everyone along the line could make some money along the way. A Swiss graduate student was at the Kriegsarchiv when I was there, researching Trieste's sad attempt to become a Galician emigration waystation on par with Hamburg, the destination of choice for Austro-Ukrainians.

Besides Hamburg, there was, of course, Cherbourg. Here's more lazy snipping: 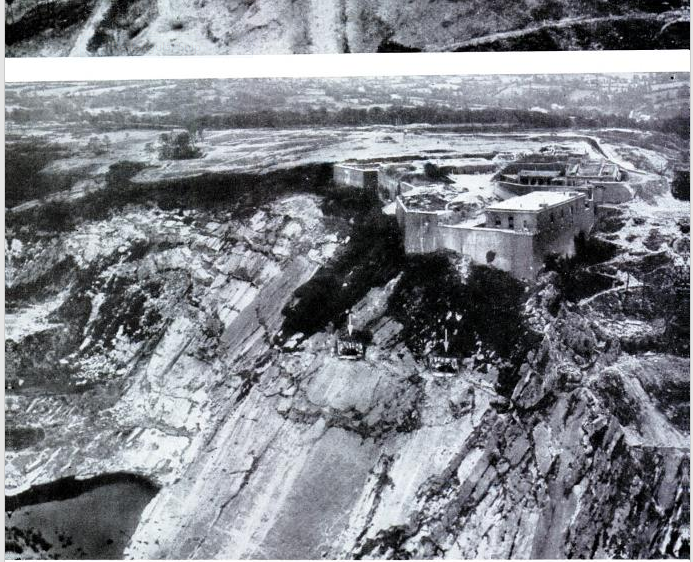 This is Fort Roule, the key to the fortifications of Cherbourg. The picture is from one of the Army official histories, also known as "the Green Books," and it is conveniently posted online at Google Books, a practice I encourage other official history series to follow suit on.

In for a penny, in for a pound. Here's the next illustration down, which gives us a better sense of where this cliff is. 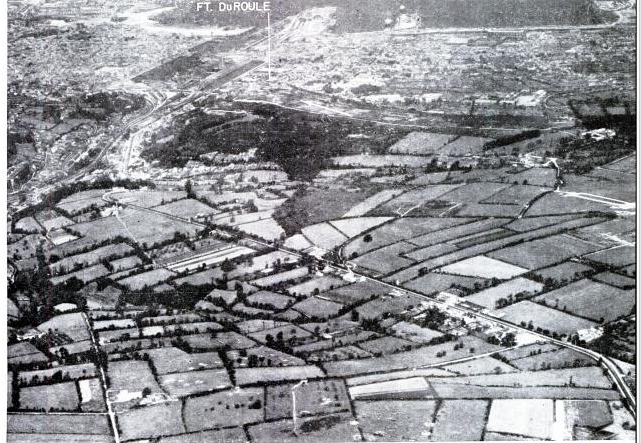 We're getting a clearer idea of Cherbourg's geology. A big rock off the coast of Europe, the space in between infilled by low and marshy ground: the Cotentin, "famous for cattle," in Rick Atkinson's phrase. A good landing place, but bad roads leading anywhere else.

It seems like an odd place for a port.  I was introduced to the ideas here by, of all people, H. Beam Piper. In his Lord Kalvan, the titular character figures out that he is in a strangely different Pennsylvania which has been settled by "Aryans who went east, and ultimately across the Pacific, instead of west towards Europe," because New York is a major city, while Boston is not: clearly the migrating Aryans have followed the rivers out of the west, and have therefore neglected natural ports lacking rivers.

Leaving aside the fact that the Charles, small as it is, is important as a means of portage around Cape Cod, and would be far more important in the world that Piper makes up than in ours, the point is clear. Cherbourg may be next to the water, but it is about as far from anywhere else that matters that it is hard to understand why civil engineers would have gone to such extraordinary lengths to build concrete quays capable of handling Atlantic liners in the high tidal variations of these waters, plus the rail lines needed to make the port useful for exporting stalwart migrants by the job lot. I was going to strain after my argument that Cherbourg complements Portsmouth/Southampton in being the potential launching off point of a cross-Channel attack from the fun old days when Napoleon III and Lord Palmerston were waving civil engineering and ironclads against each other, but bless me if that'snot Norman Longmate making the argument for me at Google Books!

So, to summarise without further digressions: Cherbourg is a relatively new port, built in the middle of the Nineteenth Century to serve as an embarkation point for trans-Atlantic liners and, potentially, Britain-bound expeditionary forces. The latter purpose justified significant fortification, while the former required ample berthing for deep-draft ships, even though, as a goods port, Cherbourg was almost irrelevant, with a peacetime capacity of 900 tons/day. Most of what is written about Fortress Cherbourg is situated in the now of 1944. This post is meant to direct attention at those concrete quays. It is not, regretably, devoted to the neat gadgets developed for the purpose by Bruce White's Directorate of Transportation. That is because they were never really used at Cherbourg, a port overtaken by events and never as important as it was expected to be.
Posted by Erik Lund at 5:49 PM

Email ThisBlogThis!Share to TwitterShare to FacebookShare to Pinterest
Labels: D-Day, Pirate History of the Atlantic, Seventy Years Ago More-or-Less Today, The Great Siege